Friday, we enjoyed not setting an alarm clock, but still woke in plenty of time for the hotel’s continental breakfast, which was OK but no more. The weather looked promising, so we took off for a full day of exploring, with the Columbia Icefield as our goal.

We left Banff on the Trans-Canada Highway and made excellent time until we hit the construction zone — they are “twinning” the highway through the rest of Banff National Park, and there’s construction between Banff and Lake Louise. But it wasn’t too bad, and soon we were at the Parks Canada information station in Lake Louise. The view from the parking lot wasn’t too bad, either. 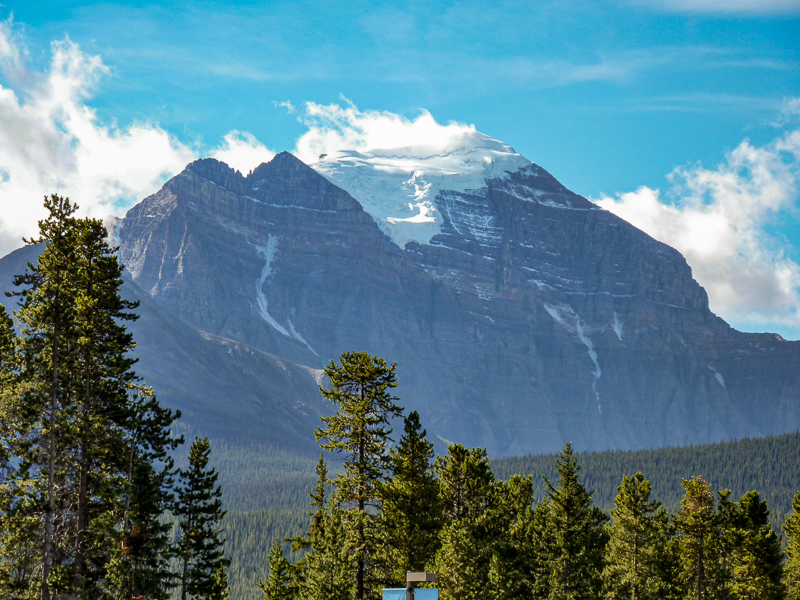 A few minutes later, we were on the way again, turning onto the Icefields Parkway, which would take us the rest of the way. Even though it was a two-lane road, it was easy driving (I’d hate to try it in a storm, though!), and the scenery was nothing short of spectacular. 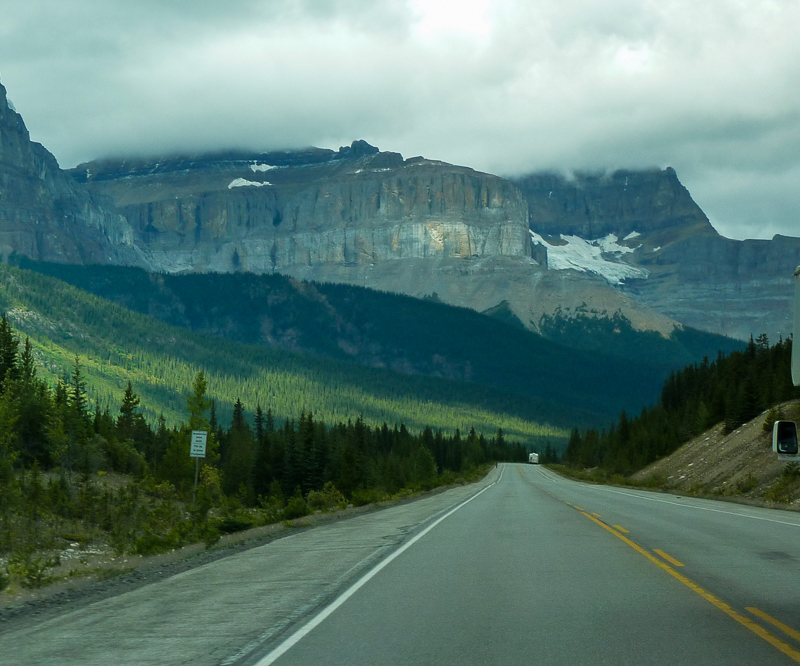 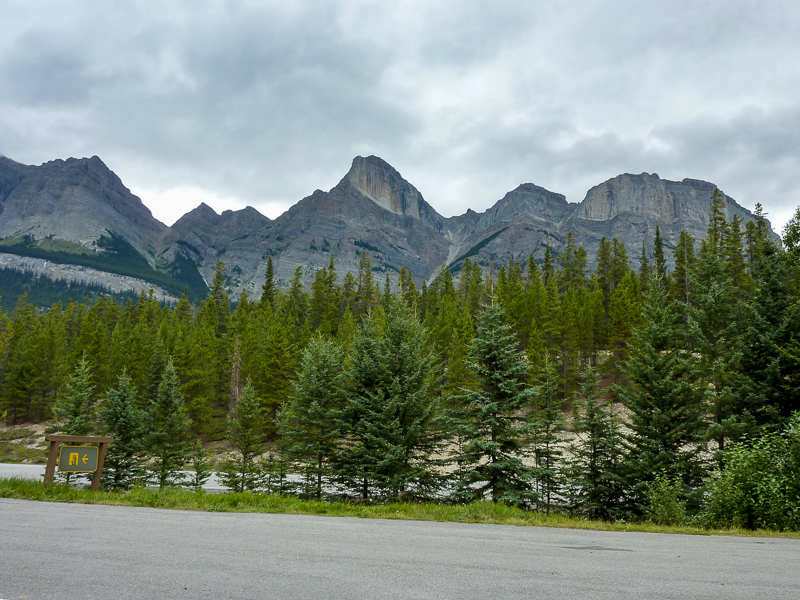 Eventually, we pulled into the Icefields Center, our goal for the afternoon. The Athabasca Glacier was just across the road. 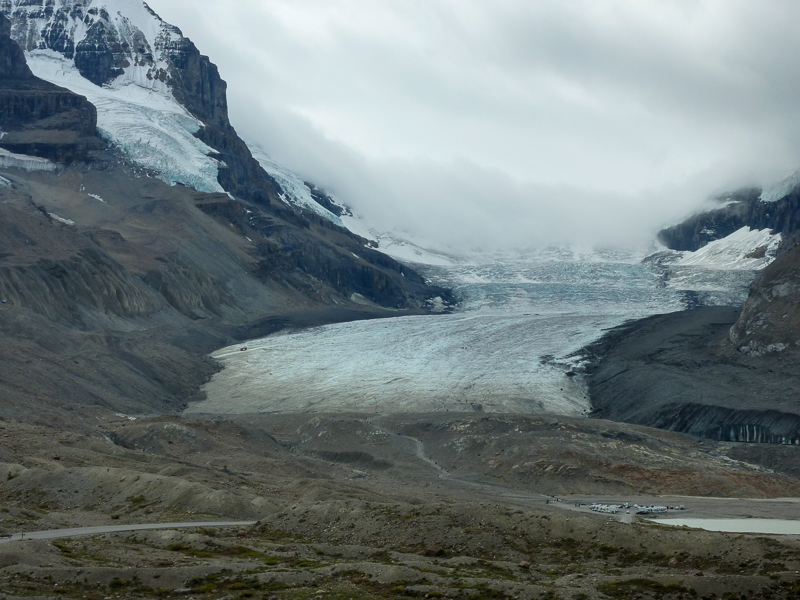 We had a quick, overpriced, mediocre lunch at the Icefields Cafeteria, then purchased our tickets for the tour to the glacier itself. After a brief bus ride, we boarded our Ice Explorer.

The warning sign on the vehicle reminded me of Star Tours, but this was not a simulation. And we did jounce a lot on our way to the glacier itself, where we disembarked and frolicked in the cold and rain for a few minutes. 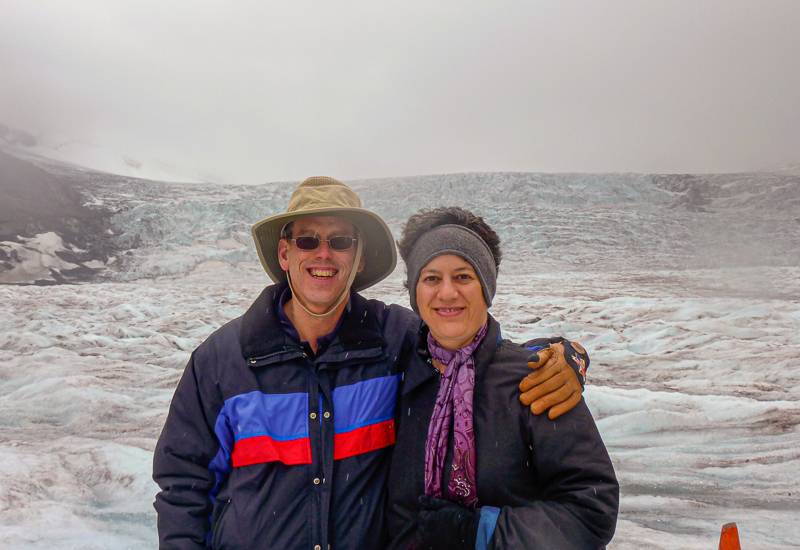 As advertised, the glacier itself seemed blue at times, and there was some melting. 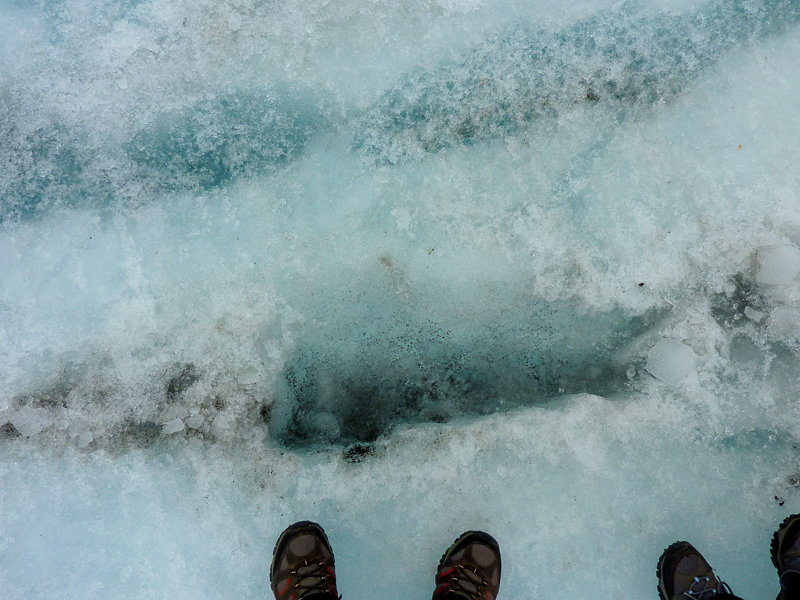 There was even more melting outside the graded area where we were let off, and some people drank the meltwater — I might have, but I didn’t feel like freezing my lips!

Outside the graded area, you could really see the contours left by weathering. 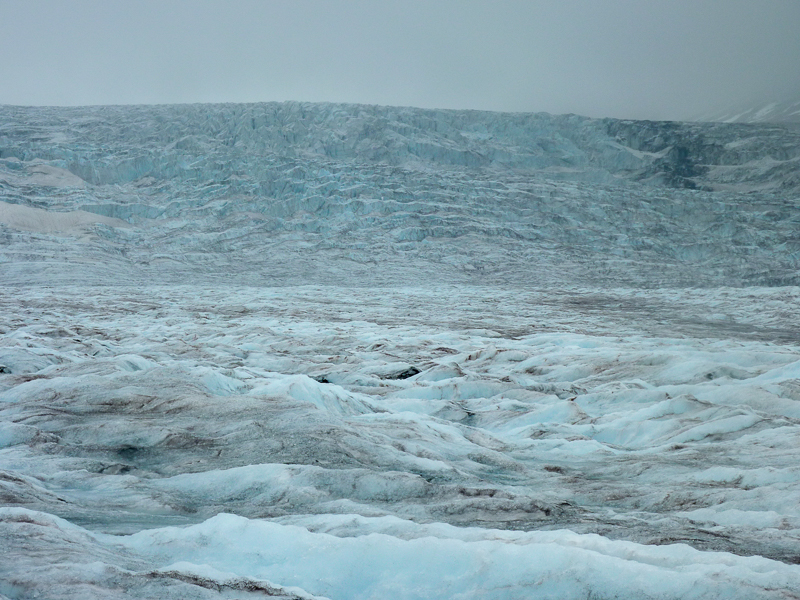 And you could also see the moraine left by the glacier. 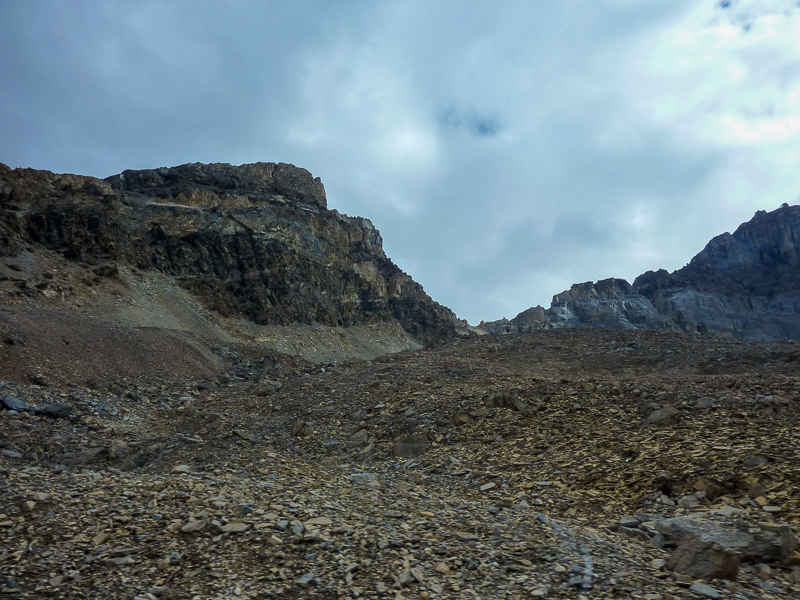 But soon, we were back in the car and heading south. This time, we were in even less of a hurry, and so we made more stops to enjoy the scenery, including one at the “Weeping Wall”. 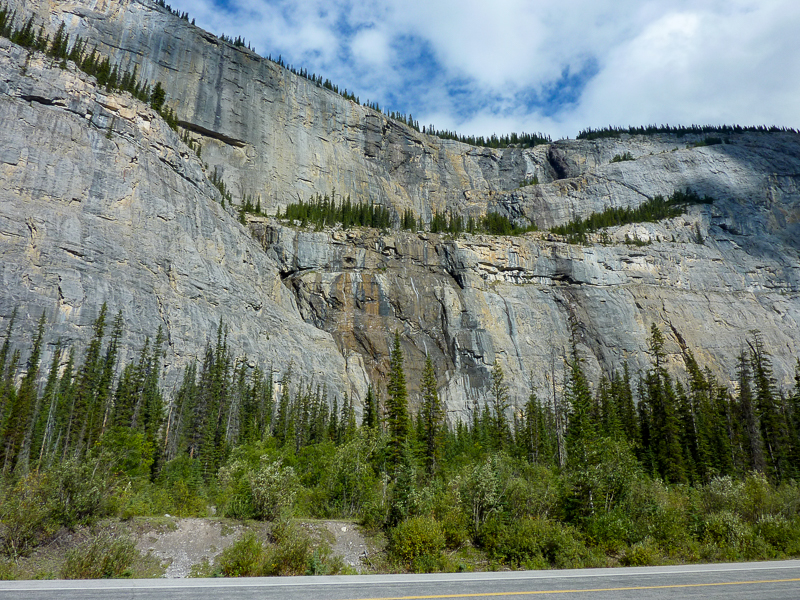 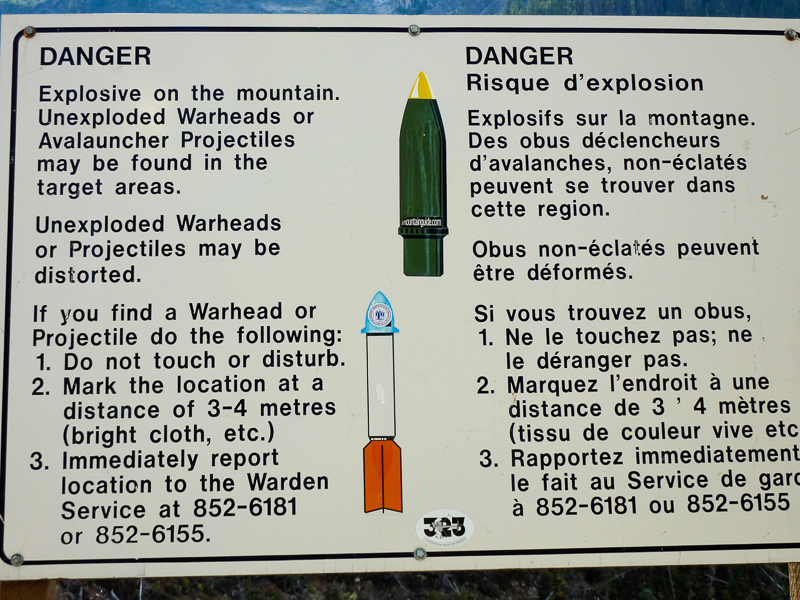 And another stop near Num-Ti-Jah Lodge, where we had a good view of Crowfoot Glacier. 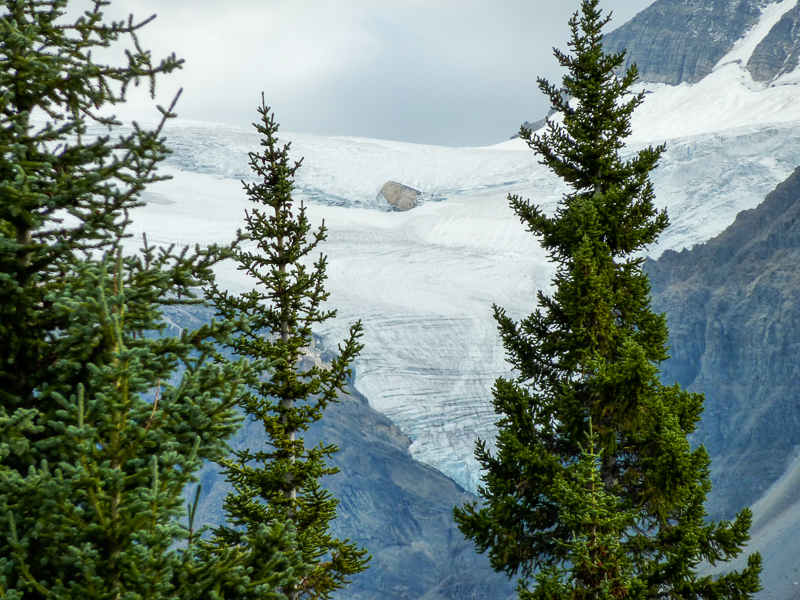 If you search the web, you’ll find thousands of photos of Lake Louise. Here are four more. 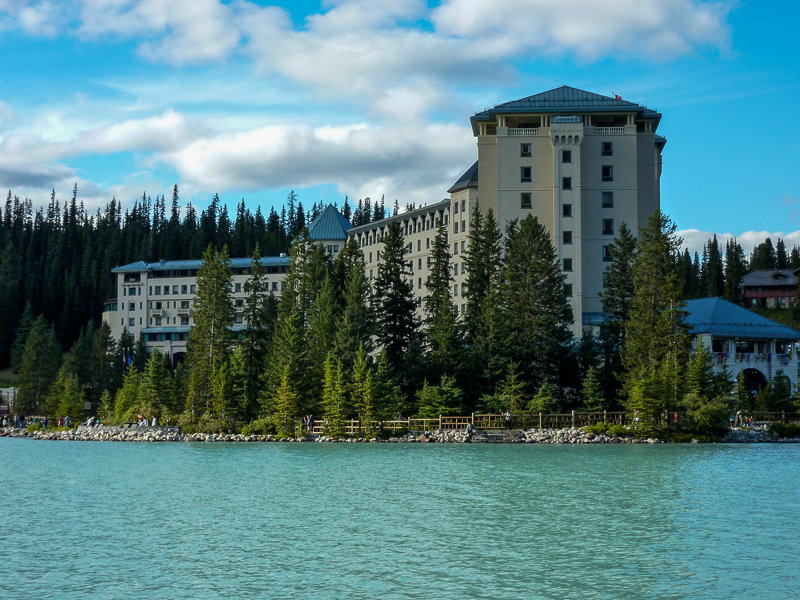 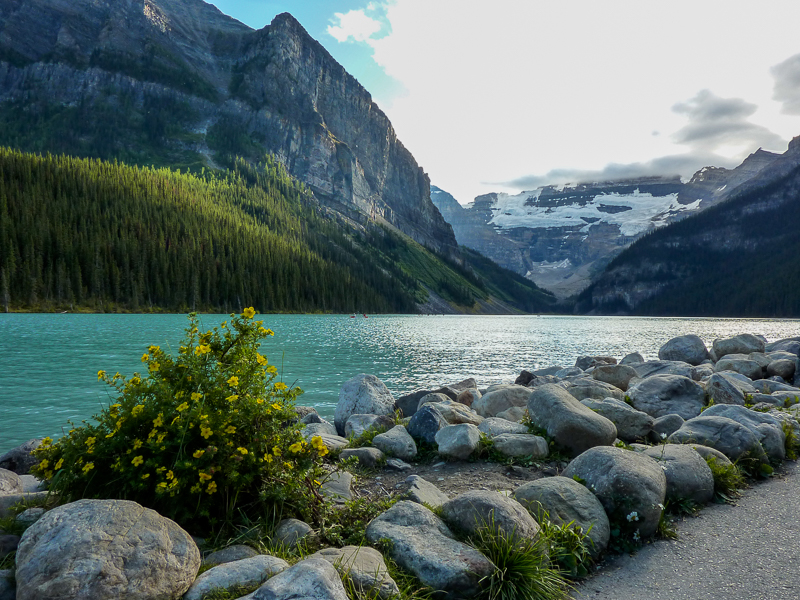 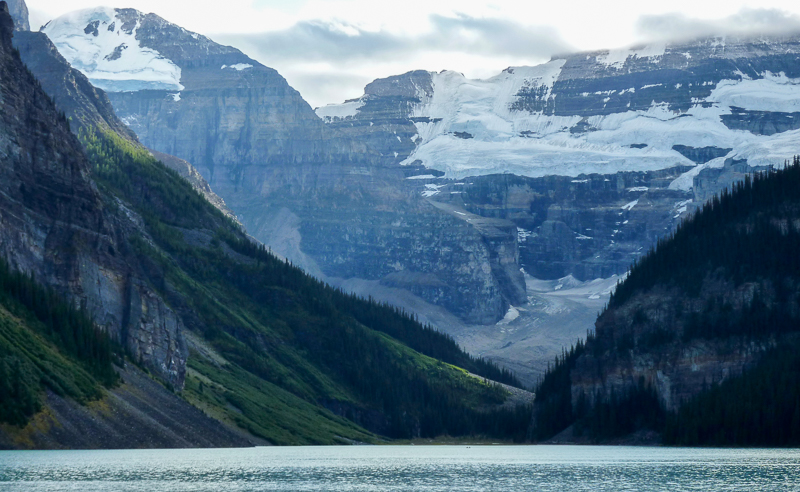 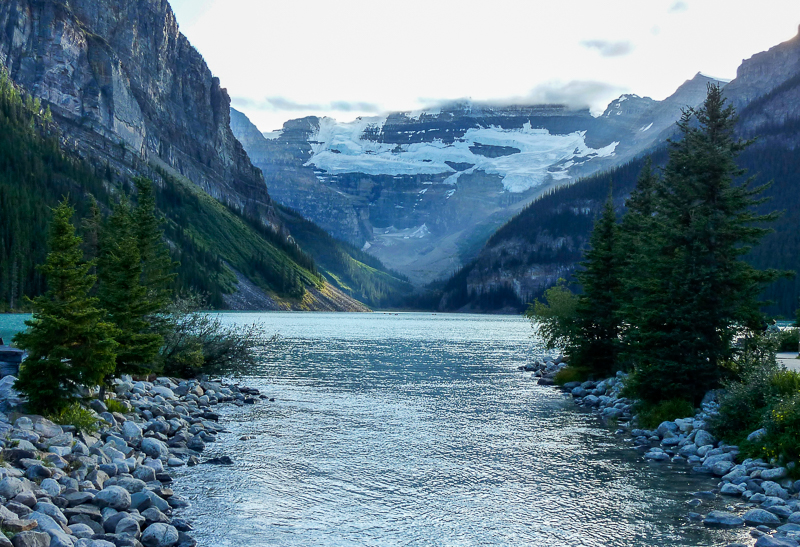 From Lake Louise, we took the Bow Valley Parkway back to Banff. It, too, was beautiful, but we didn’t take any pictures (or stop, for that matter) — and the only wildlife we saw was a couple of birds.

After a brief stop at the hotel, we hoofed it to Melissa’s Missteak for dinner, which was definitely the best meal we’d had all day, though ordering dessert wasn’t the best choice we could have made. Finally, we walked back to the hotel (via downtown Banff), and called it a night.