The latest word from Back East is that Diane’s father is continuing to feel better but will be in the hospital for several more days of observation and recuperation.

Diane’s dad has been transferred to a regular room; they’re running tests and have had specialists in to see him. He says he’d feel much better if he could cough something up (wait till he sees the bill!). They’re letting him walk around in the hospital, which sounds encouraging, but he said that he’s likely to be there for a few days.

Diane spoke with her Dad this evening, and he’s feeling much better but is still coughing a lot. He’s using a breathing mask of some sort which is helping; the specialists are still visiting, but they haven’t figured out what’s going on yet, and they don’t want to let him go while he’s still coughing, so he’s probably got another few days to spend in the hospital. And we reached her brother, who’s on vacation, and gave him the news.

Almaden doesn’t formally participate in “Take Your Child to Work Day”; instead, the lab policy is that you’re welcome to bring your children any time, but that they’re your responsibility to keep safe (not much of a problem for a programmer like me, but somewhat harder for someone who works in a cleanroom or laser lab) and entertained (this could be a problem). Jeffrey wants to come and see what I do next week, and that sounds like a good idea — but I bet he gets bored watching me do e-mail and make phone calls (and if I’m lucky, do a little programming!).

I spent much of the morning in the Extreme Blue lab as the guest speaker — I talked about standards and their importance to IBM. My talk was titled “Confessions of an ex-standards weenie” (thanks to Carl Cargill of Sun for coining the term), and I think it was helpful — if nothing else, none of the interns fell asleep while I was talking, and given the hours some of them are putting in, that’s a vote of confidence in my presenting style.

When we came home, there was a message on the answering machine from back East. Diane’s father had come back from a tour of the Maritimes a few days ago, and apparently there was a case of pneumonia being passed around on the tour bus; both he and his girlfriend have it and have been visiting doctors. But today, he was feeling really hot and then discovered he had a 105-degree temperature, so he got a neighbor to take him to the hospital. He’s in stable condition and will be transferred from ER to a regular room in an hour or so, which is about as good as can be expected, but it’s still unsettling news. Al, I hope your colleagues at Franklin General Hospital are in good form!

Today was also the annual Solstice and Anniversary party, thrown by some friends in Palo Alto in honor of their anniversary and the summer solstice. They always have a theme and a prop to go with the theme; as an example, one year, they set up a huge model of the Sphinx in their front yard. Since they are also science fiction fans and readers, the theme this year was pretty obvious.

So we decided to combine the two activities and set up a Field Day station at their party. Doug brought his Yaesu FT-817 and a portable antenna; Rich brought a keyer; I brought my callsign.

We set up our antenna on the monolith which had mysteriously and conveniently appeared in the front yard overnight.

Diane decided to see if she could contact anyone with her handi-talkie while in the shadow of the monolith. Eventually she did reach someone — me! 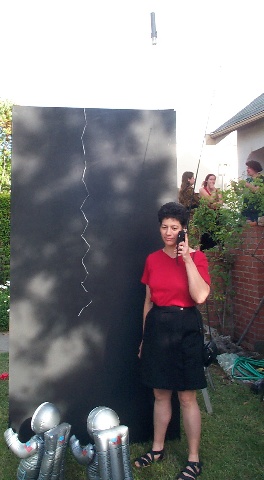 And we drew a crowd of party-goers (and maybe casual passersby, for all I know) who were curious about what we were doing. 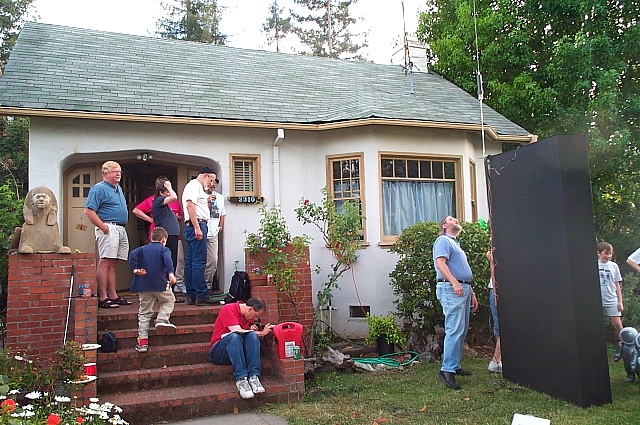 We didn’t do very well at actually working stations — perhaps the monolith’s power kept our signals from getting out. In the end, we worked two stations — one at Stanford University, about a mile away, and Diane on her handi-talkie, just down the block.

But we didn’t really expect to achieve a huge score (though I was hoping for a few more contacts, and one outside the county would have been nice) — the goal was to have some fun and play with radios, and in that, we succeeded.

I want to get a HF rig one of these days — I had been thinking about the 817 because it’s small, light, and works all bands from 160 meters to 70 cm. But Rich and Doug were trying to talk me out of getting the 817 as my only rig, and they may have succeeded. I’m not sure what to get — I’d love to get the ICOM 756PRO, but it’s more radio than I need (not that “need” is the right word anyway). I guess I’ll have to go visit the local radio pushers and see what they recommend.

Today was a quiet day; no Lab Expo, no trip to the car dealer. Boring.

Well, it was boring for me. Jeffrey had a bit of excitement at the YMCA childcare — their portable classroom caught fire. No one knows quite what happened, but I suspect that a spark blew over to the trailer from the barbecue and eventually caught.

So they evacuated the children, found a fire extinguisher, and fought the fire until the fire department arrived a few minutes later and ensured that it was well and truly out.

No one was hurt; the fire was entirely on the outside of the portable, and they were back inside in about 45 minutes. But it did give them something to talk about!

The weather is finally cooling off a bit — someone up in San Francisco deciced to pay the natural air conditioning bill, I guess. There’s a nice cool breeze coming through the windows for the first time in a week — very nice!

Tomorrow, we go to a party and set up a Field Day station. For tonight, Shabbat Shalom!