I was in Beaverton, Oregon earlier this week, for a meeting of the Technology Council of the IBM Academy of Technology. We have six meetings a year in various locations (the next meeting is in Beijing, which should be interesting!), usually at IBM facilities, where we can interact with the local technical community.

The meetings are long, and the nights are longer — we invariably have at least one group dinner. This time, we had two; the local site executive took us out for dinner at Imbrie Hall (part of the Cornelius Pass Roadhouse). I can heartily recommend their Nebraska Bitter — the cheesesteak sandwich was OK, but not up to the standard of the beer. And then our “traditional” dinner was at the Hall Street Grill, where the salmon was very good, the chocolate caramel brownie sundae was excellent, and the wine wasn’t half-bad, though I never got to find out what it was. And I also had a delicious dinner at McGrath’s Public Fish House (they had marlin on the fresh list; I’d never had marlin before, but I’d happily have it again. I also recommend the Rex Hill Pinot Noir, which complemented the marlin very nicely.

Lunches weren’t up to the same high standard as dinners — which is probably a good thing for my waistline. The first day, we had lunch catered from the IBM cafeteria. It was the standard sandwich selection — need I say more? The second day, they brought in pizza from a local place, which was far better, but nothing outstanding. My meeting ended early on the last day, so I went straight to the airport, where I had an amazingly good meal at the Portland Brewing Company Pizza Pub — I had the salmon panini sandwich, which was easily the best meal I’ve ever had in an airport (and I’ve had far too many airport meals over the last few years). The only competition comes from the International Terminal at SFO, and I think I’d give this place the nod.

While I was at the airport, I also visited the Made in Oregon shop. I planned to buy smoked salmon and wine, but while I was there, I decided to experiment and grabbed a small box of Oregon Wine Truffles from the Euphoria Chocolate Company. This was a BIG mistake — I should have gotten a large box. Oh, well — there’s always mail-order!

A few years ago, I spent Simchat Torah with a small Reform congregation in England, and I was given the honor of the last aliyah of the old cycle of reading the Torah.

Yesterday, I (and the rest of my family) had the chance to perform the 613th mitzvah — the mitzvah of writing a Sefer Torah (Torah scroll).

Not by ourselves, of course — Congregation Shir Hadash has commissioned a new Torah scroll in honor of the congregation’s 25th anniversary — and every family in the congregation will have the opportunity to write a letter in the Torah scroll over the next few months. The writing began Saturday night with a celebration (including a truly decadent chocolate fountain!). Our turn to write a letter came on Sunday morning.

Since the Torah must be written absolutely correctly, we didn’t actually get to drive the quill; instead, we held onto the quill while the scribe filled in the letter, which he had already outlined. 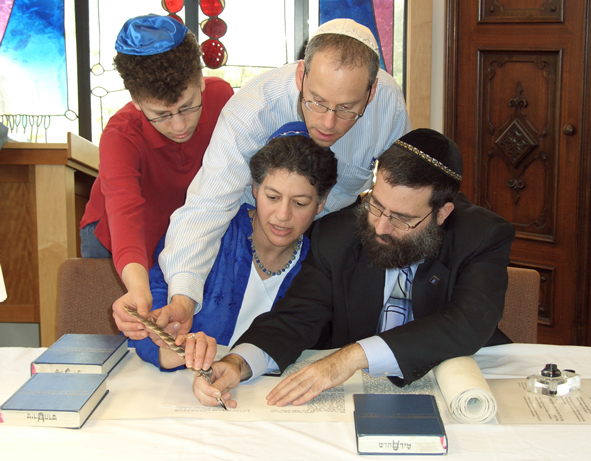 Our letter is the yud in ha-sh’mayim (heavens) — it’s the leftmost filled-in letter below:

Our letter is at the very beginning of the Torah, in Parashat Bereshit . I’ve never actually read from the Torah scroll, but when I do, I know what portion I want to read.