I spent much of the day watching the second day of the District 101 Toastmasters Conference. Two members of my home club, Silver Tongued Cats, earned special recognition – Gordon Mattingly placed third in the International Speech Contest and Sherman Zell was recognized for earning his Distinguished Toastmaster award (after not quite 37 years in Toastmasters). 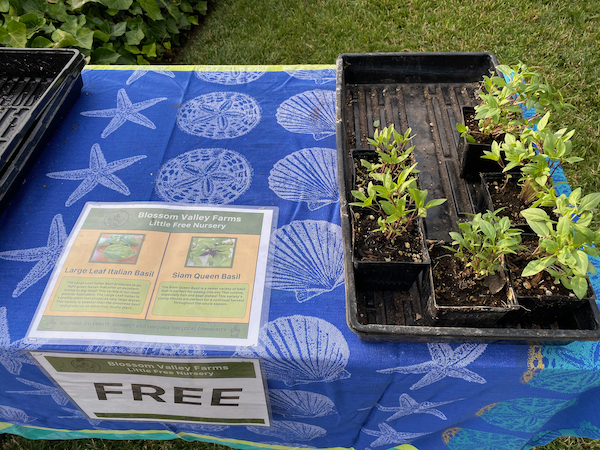 We took our evening walk a bit early tonight to be sure we’d be home before the citywide curfew went into effect in San Jose; on the way home, we passed by neighbors who have had a Little Free Library for a couple of years. They’ve just branched out and added a Little Free Nursery – we took home a seedling of Siam Queen Basil and planted it.

It’s been a busy day. Yesterday, our neighbor dropped off some basil and kale for us to plant in our raised beds. So Diane rose early this morning to work on the garden – she pruned the tomatoes we’d planted six weeks ago, which had grown far more than I expected (and which already have fruit, though it’s still weeks from being ready) and did other cleanup work so that we’d have a place for the new plants. Then she went to Shabbat Morning services.

In the meantime, I went to the annual Toastmasters District 101 Conference. Even before the lockdown, they’d lost their original venue and had had to find a replacement – and then they had to move it onto Zoom. Patricia Fripp was the keynote speaker (and had good advice and suggestions, as always); after that, we held the Tall Tales Contest. By then, services were finished, so we had lunch and then finished our planting.

This evening, we did the Daily Kos “Flip the Senate” pub quiz. Some of the teams were pre-assembled groups of friends or colleagues; ours wasn’t – we called it “Strangers on a Team”, but we did pretty well, finishing 7th out of 30 teams. It was a lot of fun – Diane and I tried to guess which questions Jeff had created (we figured out one for sure).

Tonight was also the Shir Hadash 40th Anniversary Gala – we didn’t have to dress up this year. We didn’t even have to attend at the right time because everything was recorded in advance to avoid technical issues. There are other events scheduled to celebrate the 40th anniversary – I hope some of them can take place in the real world instead of on a screen. 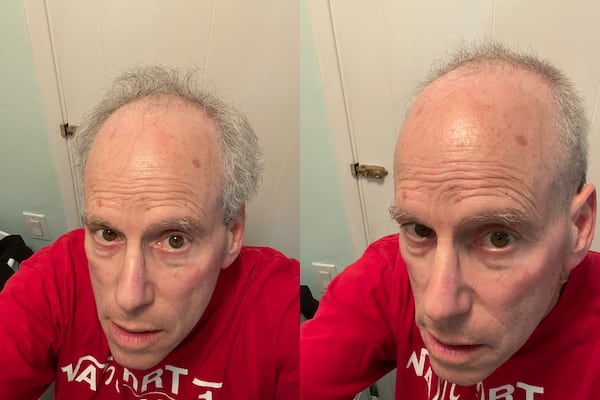 Today was a big day – the Wahl Peanut that Bill Nye recommended arrived and Diane wielded it on me. It was her first haircut, and she did a great job! I feel like there’s a lot less weighing on my mind now.

We drove up to Menlo Park to pick up our spice order from Penzey’s. It was the farthest we’ve driven for at least seventy-four days – traffic was light, as expected, even on the way home during rush hour (the metering lights were solid green). I called the store when we got to the parking lot; they put my bag of spices outside; I picked it up. I probably didn’t even need to put on my mask, but I did.

The weather has changed radically today – on Wednesday, it got up to 100 degrees here; today, it might have hit 70, and it’s been really windy all afternoon – I had to put on a jacket for our evening walk!

Tonight is Shavuot, which is considered to be the day when the Jewish people received the Torah. It is traditional to engage in group study until late at night (until dawn, if you’re able) – this year, Shir Hadash is doing it via Zoom.

We’re taking advantage of being on Zoom; after a short study session led by Rabbi Aron, we watched The Redeeming Angel, a film made by three Israeli brothers about their mother – she was a young Dutch Jew during World War II who was sheltered by a Christian family and survived. After the war, she made aliyah to Israel; in 2017, she and her sons went back to Holland to participate in the installation of Stolpersteine (stumbling stones) in front of her family’s house to commemorate their murder. And one of the brothers joined us from his home in Tel Aviv after his all-night study session.

After that, Gillian Perry, founder of the Anne Frank Trust, spoke to us from her home in London about “Anne Frank’s Life and Surprising Legacy” – her life story is familiar, but how the story has affected people all over the world was, as advertised, surprising, including, among others, Nelson Mandela and young children in Kazakhstan, Northern Ireland, and Brazil.

One other Shavuot tradition is eating dairy foods. We tried another Times recipe for dinner: Blistered Broccoli Pasta with Walnuts, Pecorino, and Mint (it was East and quick and tasty – we’ll have it again), and we have some cheesecake waiting for us after the session ends.

Yesterday was shopping day, so today was cooking day. Lunch was an old friend (spiced chicken breast on the Traeger, this time mostly using Penzey’s “Tsardust Memories” seasoning, which is largely sweet paprika).

For dinner, we experimented with yet another recipe from the New York Times’ “At Home” section, this time Glazed Cod with Bok Choy, Ginger, and Oyster Sauce. Of course, we didn’t use oyster sauce – we substituted a hoisin/soy mixture. It came out pretty good – it probably would have been better had we had real garlic instead of chopped garlic from the jar, but I’d definitely have it again.

Our spice supplies are being depleted a lot faster than usual, so I was happy to get an email from Penzey’s offering contactless pickup of spices at their Menlo Park store; I placed an order and we plan to go there on Friday. It’ll be the longest drive we’ve taken since the lockdown, but it won’t make a significant dent in the podcast backlog.

And tonight was the final episode of Pirke Avot study at Shir Hadash; now we’ll have to find something else to let us know that it’s Wednesday.