We went on our usual Tuesday walk on the Los Gatos Creek Trail in Campbell; it was a bit on the chilly side, but pleasant enough, and the first trees are starting to blossom. 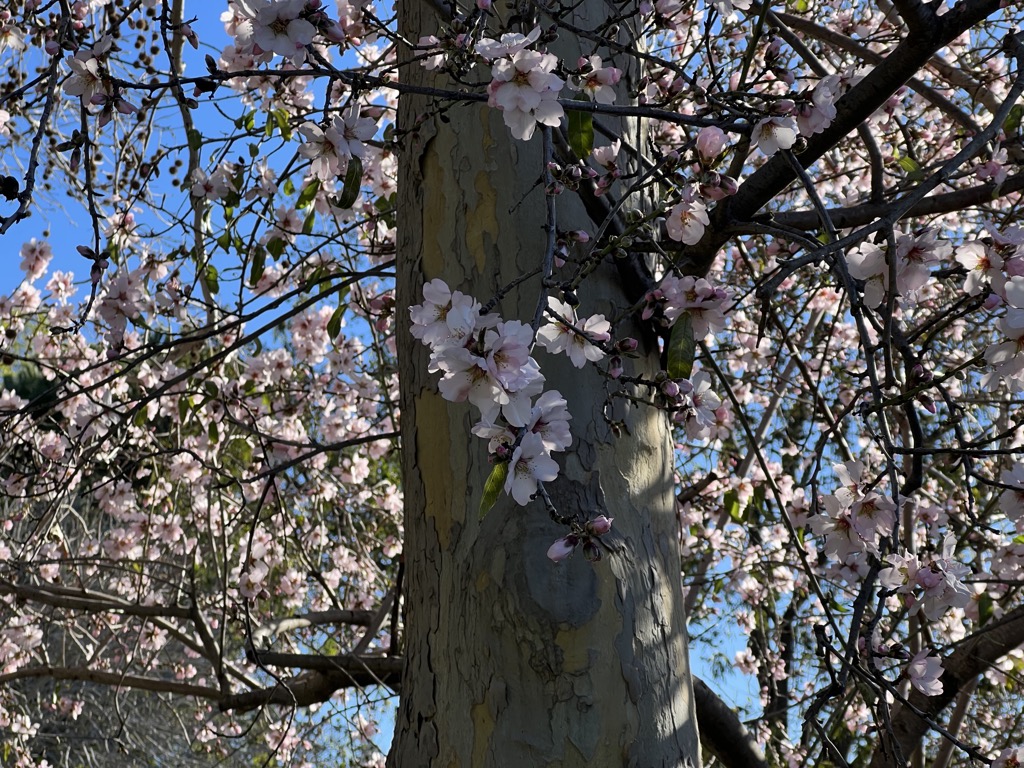 We stopped in the Pruneyard for a warm drink and I noticed that the Blue Mercury store was closed and being packed up, despite having a “Now Hiring” sign still in the window. A truck came by just after I took this photo and removed all of the exterior signage. 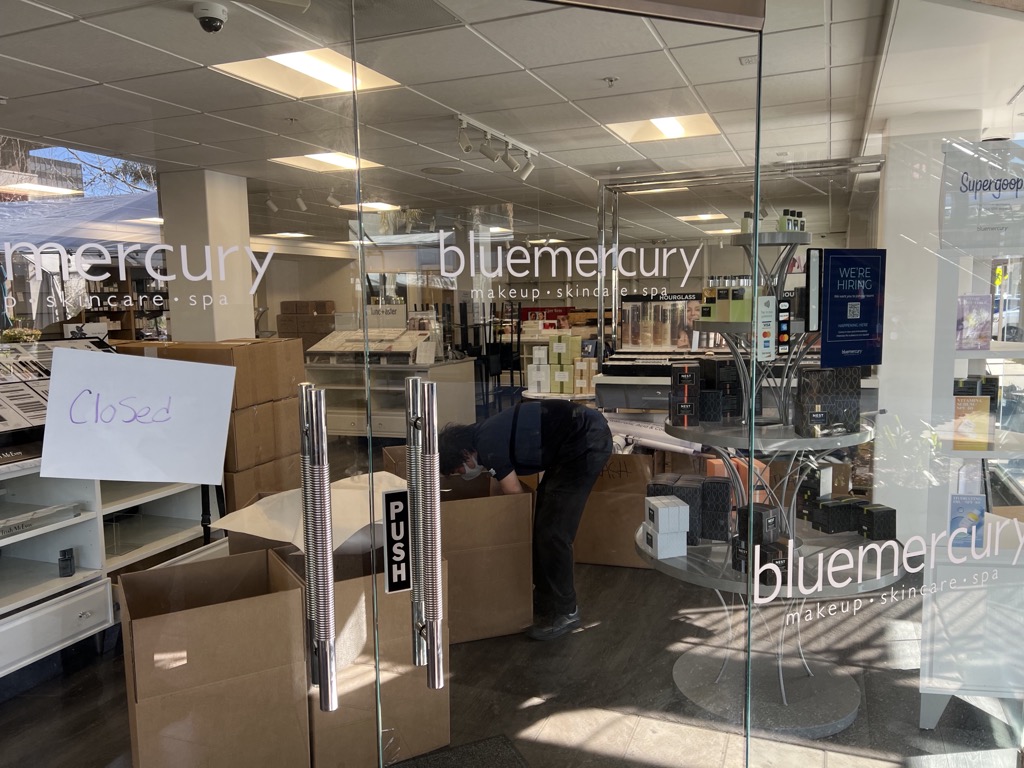 I’m giving a speech at the Silver Tongued Cats on Thursday, and I started working on it this evening. I want to use a few slides during the speech; I don’t like the way Zoom adjusts the window when you start and stop screen sharing, so I’m going to try to use OBS Studio so I can switch between slides and my camera freely. It seems fairly simple….

We had a long chat with one of our neighbors about his solar installation; it was informative but again, not exciting.

Perhaps I’ll have more to write about tomorrow. :-)

I didn’t do anything about DVDs, Blu-Rays, A/V systems or even solar energy today. Instead, Diane and I went to see the City Lights/Teatro Visión co-production of “Miss You Like Hell“. 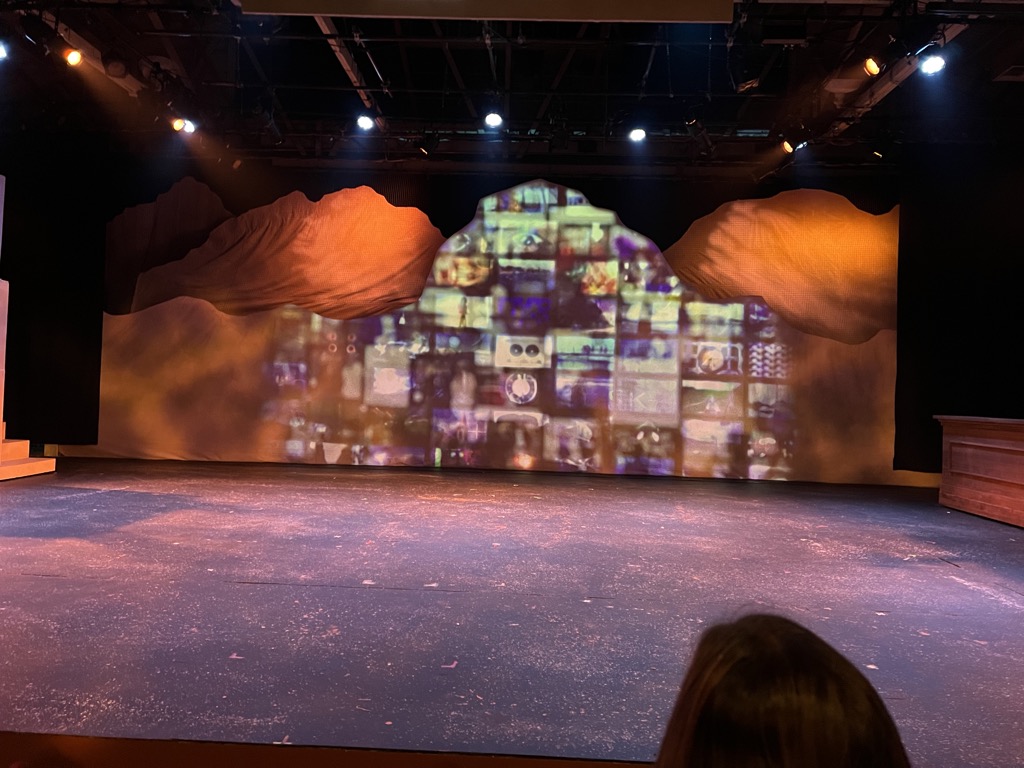 Even though I’d read the program and some of the background info, I really didn’t know what to expect. My heart sank a bit when the show started and I saw that there were bilingual supertitles just above the stage – I was afraid I’d be spending the whole show reading the supertitles instead of watching and listening to the actors. As it turned out, almost all of the dialog and the songs are in English, with Spanish being used where it added impact or flavor (and the supertitles were hardly ever necessary for me to figure out what they were saying).

The play is about a mother and daughter taking a cross-country road trip; the mother is an undocumented immigrant who’s trying to avoid deportation, and the daughter is 16 and hasn’t seen her mother in four years. I’d say hilarity ensues, and there was a little of that, but the story is more serious than that – and it felt very real. The music added to the story, and the set design was a delight. The ending was satisfying and meaningful – I’d say more, but I don’t want to give anything away.

The show runs through February 26 (though the final weekend will be at the Mexican Heritage Plaza, not City Lights). Highly recommended! 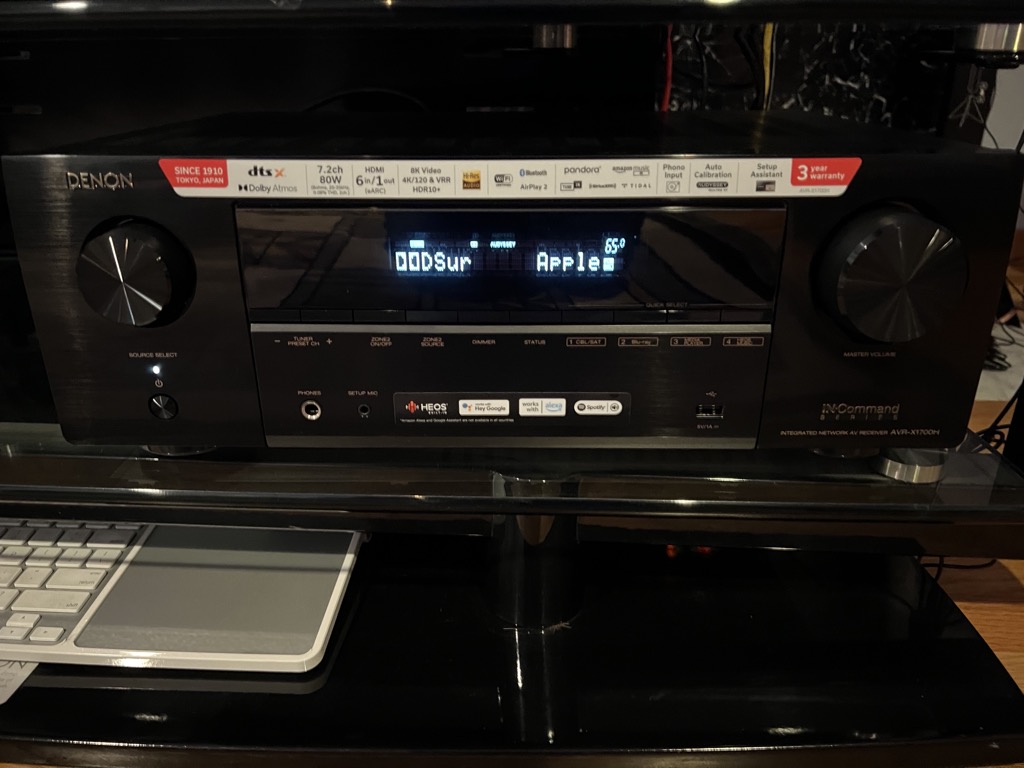 Right after we Zoomed to Torah Study this morning, I began taking apart the A/V system in the family room so I could install my new Denon AVR-X1700H (the name just rolls off your tongue, doesn’t it?). I thought it would take a couple of hours to get everything reconnected, but I was wrong. I didn’t finish connecting things until after dinner, and it took another hour or two to get all of the remotes properly reprogrammed and set up all of the devices and audio profiles.

In the process, I discovered that I’d wired the rear speakers out of phase when I last set things up. It’s easy to fix by swapping the red and black wires for each speaker; when I have a little more energy, I’ll swap the banana plugs on those speakers so the color-coding is right again.

It wouldn’t have taken quite so long if we hadn’t also had an appointment with one of the companies we’re considering for solar, Sunrun. It was a good conversation and I learned a lot, but I also came away with new questions. They were pushing a “Prepaid Power Agreement” where you own the equipment but they take the tax credit; they’d include 25 years of maintenance and battery replacement and even install an EV charger as part of the deal. It costs about $1200 (after tax credits) more than a straight purchase, which is less than it would cost us to get a charger and have it installed, so it’s appealing…but it also seems too good to be true.

We also did a lot of planning with Diane’s brother and sister-in-law for our upcoming trip to France; we’re arriving a few days before our cruise, and we wanted to find tours that would complement the cruise line’s offerings. We decided on a “Silk Tour in Lyon” and another tour that concentrates on WWII and the Resistance – and we’ll still have plenty of time to wander around on our own.

Progress on many fronts, but not a very restful Shabbat!

It’s been a busy day.

My computer finally finished the Handbrake phase of the Mel Brooks Blu-Ray conversion after working on it for 60 hours. We started conversations with two companies about installing solar on our house. We made a trip to Costco. We made a quick stop at the soon-to-be-closed Bed, Bath, and Beyond and left with two head assemblies for my shaver (something I needed to buy soon anyway) and two tray tables (I’m sure we’ll find a use for them, and we did resist buying the four-pack), all at 40% off. And we went to Best Buy and picked up a Denon AVR-X1700H receiver to finish the A/V upgrade cycle. 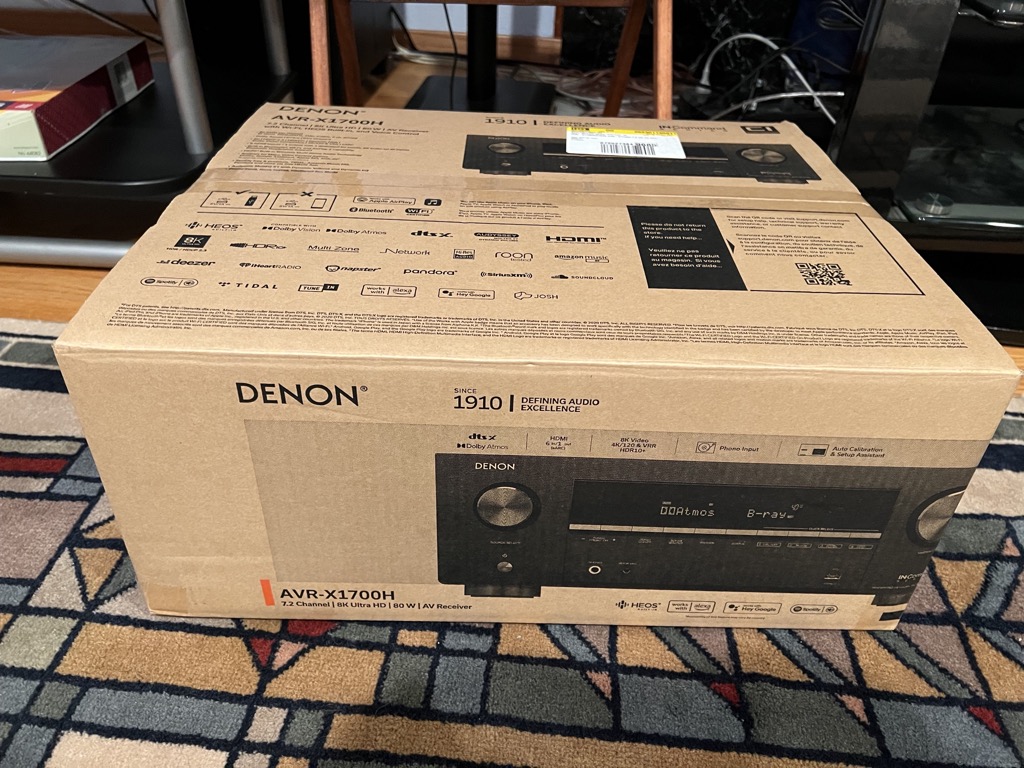 The receiver is still in its box and I haven’t tried reworking the subtitles on any of the converted Blu-Rays. How’s that for restraint?