Today, I spent the day at the W3C Advisory Committee meeting, which, of course, is the reason I’m still in Amsterdam and was able to play tourist all weekend. I did escape for a brief lunchtime walk — it was difficult to go back, since the weather had finally improved (it was dry if not exactly warm).

But the highlight of today’s meeting was the dinner at the Grand Hotel. The Grand Hotel is clearly at a very different level than the Marriott or the Barbizon Palace; the only reason it’s a five-star hotel is that they don’t ever give out more than five stars.

The dinner was held in the Council Chamber (unfortunately, the room was too dimly lit to get a picture which does it justice). I don’t know what council sat at the council table, but without microphones, I don’t know how people at one end heard the other. Late in the evening, Jean-François Abramatic (W3C Chair, seated in the “Legi Gregi” chair (and no, I don’t know who Legi Gregi was)) introduced the

explanation of metadata by Tim Berners-Lee and Ian Jacobs, which was an appropriate conclusion to the evening.

The dinner ran to five courses, with a vegetarian option as well. Dinner ran late, even by Amsterdam standards; I got back to the hotel around 11:30pm — some folks were planning to go out for more partying, but I’d had enough and went to bed to be ready for the second day of the meeting. 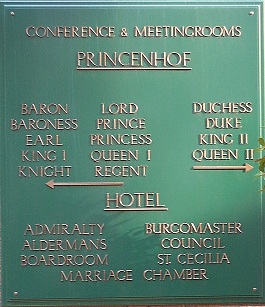 (I wonder what kind of meetings get held in the Marriage Chamber?)