The online version of the story also omits the photo showing us and the remains of our lunch (I wanted to clear the tray, but the photographer said “no”), but through the miracle of modern technology, I can repair that omission. 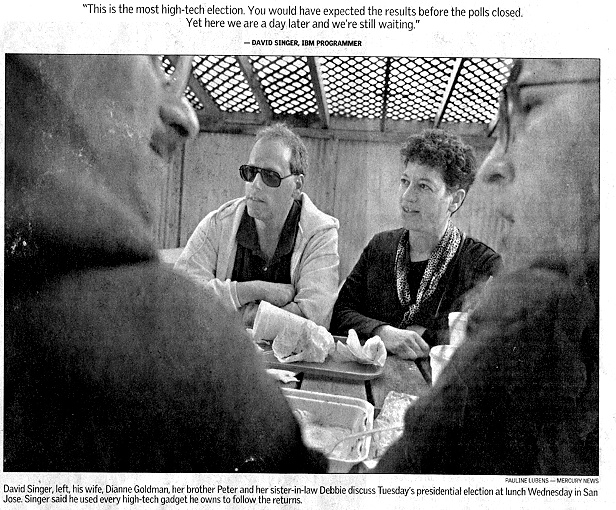 The New Yorker did better on accuracy when they did a story on “where e-mail goes” — their fact checkers called several times, once to verify that you could, indeed, see mountains when sitting in the IBM Almaden cafeteria. On the other hand, they didn’t like my actual title (Senior Technical Staff Member) and had me make up something slightly crisper (and I’ve forgotten what I made up), so you can’t rely on them 100%, either!

We had a Webvan delivery this morning — as always, they were on time and courteous. Unlike previous deliveries, though, this time the ice cream was very soft; the driver said it had been in the freezer compartment on the truck, but “maybe there was no dry ice”. I called to complain, and the customer service rep immediately credited our account for the price of the ice cream and said she’d check with the warehouse to make sure they’re putting dry ice on the trucks. I’d really rather have had the ice cream arrive solidly frozen, though — tonight, we’ll have to do a quality assurance test on it.