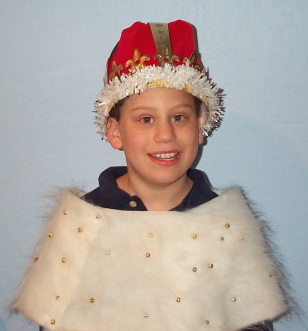 Today was Jeffrey’s 11th birthday — but that’s not why he’s dressed up
as King Henry VIII. He had to dress that way for school. Today
happened to be book report day, and all of the students had to dress as
the characters whose biographies they were reporting on; Jeffrey chose
to read
Henry VIII and His Chopping Block
(in the “Famous Dead People” series), so he was the king. He says his
presentation went well and people enjoyed it, too.

After school, we used his birthday present, the Marvel Comics edition of
Monopoly; he won, decisively, having gotten, by sheer luck, the monopoly
consisting of
Marvel Comics #1 and Captain America #1 (Boardwalk and Park Place in the
regular edition). We’ll get even next time.

But I guess it’s just as well that Jeffrey won; you don’t want Henry
VIII to be mad at you!