I decided I should catch up on a bunch of my accumulated reading before disappearing into Harry Potter 6. So I read the last seven week’s worth of Ten Minutes of Torah columns, as well as the backlog of Torat Chayim and Kolel Parasha Study e-mails.

Then I turned to the paper mail, specifically the August issue of QST. I skimmed most of the technical content, but the “Old Radio” column by John Dilks, K2TQN, caught my eye. This month, he was writing about ham gear sold by Sears, Roebuck, back in the ’30s and ’40s (hmmm, I guess I should say 1930s and 1940s to avoid any Y2K confusion). Sears sold its own brand of gear (Silvertone, not Kenmore!), but they also sold name brands, including Hallicrafters. And John included a (very much reduced) scan of a two-page spread of Hallicrafters gear from the 1940 catalog.

One item on that spread looked familiar, and when I took a close look, I was pretty sure it was a Hallicrafters SX-25 “Super Defiant” receiver. My mother had bought me one when I was in elementary school, and I used it for several years, until one sad day when it took a lightning strike to the antenna and all of the smoke came out of the radio. Amazingly, the homeowner’s insurance company was willing to pay for the radio (this was in the days when deductables were low and you weren’t afraid to make a claim), but, since it couldn’t be repaired, I chose to buy a cassette recorder instead, and drifted away from shortwave listening and ham radio for a number of years (though I finally did get my license in 1989, just in time to be ready for the Loma Prieta earthquake).

I wrote John asking if he could send me a clearer image of the part of the page dealing with the SX-25, and he was kind enough to forward it almost immediately. 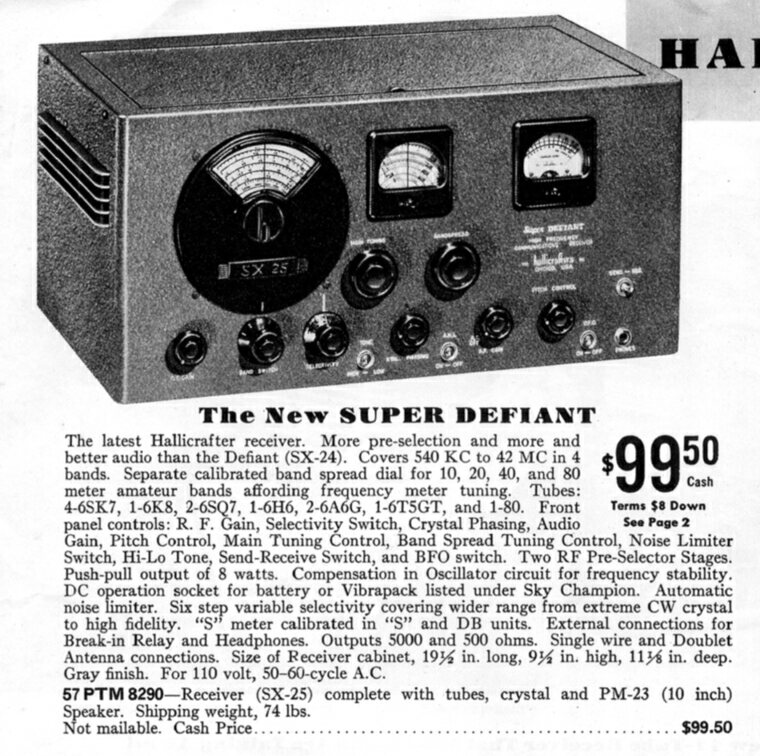 John also mentioned that SX-25’s are fairly common (a quick search on eBay doesn’t show one available right now, but one sold earlier this month). Hmmm….

But not until after I finish Harry Potter 6. I’m about one-third of the way through, and so far, so good.