IBM is a big supporter of National Engineers Week, encouraging us to go out and visit schools to help interest students in technology. Last year was my first year as a participant, but the only classroom I visited was my son’s classroom — and, while I probably did some good, one of the goals of NEW is to reach out to kids who are more at risk than the kids at Kehillah are likely to be.

So this year, I volunteered again, and today was my day to go visit a classroom. I didn’t go alone this time; instead, I went with a colleague, who used to be a substitute teacher — and we visited her daughter’s 5th grade classroom. It was a very different experience — instead of fifteen well-behaved teenagers (yes, it can happen!), there were 29 kids, some of whom were very quiet and shy, and some of whom were, well, let’s just say “boisterous”.

But the kids were interested, especially once we started the activity — we broke the room into four teams, each of which had to program one of their number to perform a simple task. They had a few elementary actions to use (things like “move left foot forward one foot”), but that was more than enough to give them opportunities to make some fun mistakes. And they did — telling the robot to move the same foot forward several times in a row, or forgetting to have the robot get up before starting to walk.

Eventually, all of the teams succeeded at their tasks, and there had been no injuries, even though I’d forgotten to tell them about the Three Laws of Robotics.

I was glad I wasn’t on my own today, but I may volunteer to do this again in another school later this spring. It beats debugging my code!

I picked up Dave Barry’s second novel, Tricky Business, yesterday. Somewhat to my surprise, there wasn’t a single booger joke in the entire book; however, other bodily secretions played pivotal roles in the plot. Not that there was a lot of plot — but what there was moved right along; the whole book only took me a couple of hours to read. And there were two things which made the book special for me:

Go thou and do likewise.

Courtesy of Scoble, an amusing video: What if Microsoft designed the iPod box?. I’d love to see someone do an IBM flavored version, though it probably couldn’t be contained in a three-minute timeslot.

Mark Bernstein recently wrote that even a posting about a cheese sandwich might well be worth reading, as well as writing. But I hardly ever eat cheese sandwiches, so I haven’t even had that as an impetus to write lately.

I guess the last cheese sandwich which made an impression on me was a long time ago, on a trip to Washington, DC, with my cousins. We made the mistake of stopping at a place called the “Virginia Inn” somewhere around Ashland. I was probably 12 at the time, but I still vividly remember the so-called grilled cheese sandwich that they inflicted on me — it was cold and greasy, completely inedible, and I’m pretty sure it cost upwards of a dollar (and that was back when a dollar bought something). And it took forever for them to deliver it, too. The place has since gone out of business, and rightly so.

This blog hasn’t gone out of business, though I have been awfully quiet lately; I’ve thought about posting, but never when I’ve been near my computer with time enough to write something. I’ve been trying to do Technical Stuff at work (of late, my most effective programming tool has been PowerPoint, and that’s a sad state of affairs for someone whose title is “Distinguished Engineer”), and, as is always the case, programming tasks expand to fill all available time and mental capacity.

And I’ve been reading books at home rather than sitting on the computer till all hours; I decided it was time to work on some of the backlog which I’d picked up at Worldcon last August — perhaps after I finish those books, I’ll find the piles buried elsewhere in the house from previous years. So four of the last five books I’ve read were old SF:

The other book I read recently was nonfiction; The Holy Thief by Rabbi Mark Borowitz. Borowitz started life as a nice Jewish boy in Cleveland, but after his father died at age 14, he went to hell (more-or-less literally), beginning a career as a criminal which sent him to prison twice. The second time, he realized that he was on a death trip, and turned back to Judaism , eventually becoming the rabbi at Beit T’Shuvah in Los Angeles. I almost literally could not put the book down and finished it in two sittings; Diane had a similar reaction. By coincidence, while we were reading the book, Jeff was in LA on a class trip from school, where they visited Beit T’Shuvah, although he didn’t get to meet Rabbi Borowitz. This book will be the Shir Hadash book group book for June — highly recommended.

The USER group in Computer Science at work has a weekly “Tea Time” gathering every Thursday afternoon, where people from the USER group and related areas gather for an hour or so of food and talk. I don’t know how long the gathering has been happening — I first heard of it when I joined Almaden Services Research in 2004 — but I’ve been a frequent attendee.

People take turns hosting, and so the cuisine varies, although it’s very rarely nutritious — or, to put it more directly, people like to bring dessert. Today, a colleague and I split the hosting duties, trying two approaches to chocolate cake.

Hers was a variation on Gourmet’s Double Chocolate Layer Cake, using a cream cheese frosting for a contrast. I made the Simple Chocolate Sheet Cake that Al suggested, as I’d done for Diane’s birthday last year, although this time I remembered to put the vanilla in the frosting.

There was a definite contrast between the cakes. Her cake was much more complex and subtle, with many flavors and an elegant presentation (she even brought it in a box). My cake had one, rather unsubtle message: chocolate!. It was very dark (and the frosting was even darker), and there were no distractions like cream cheese or strawberries. And it was still in the cake pan, because I didn’t have anything big enough to transport it in.

We had thought about taking a poll to see which cake people preferred, but didn’t get around to it — both cakes vanished, with people going for seconds of both, so I guess we both won.

I wonder what next week will bring.

Scoble is running a test of blog search engines, and this is my contribution to the dataset.  Hmmm…I am not yet there. Let’s say “brrreeeport” and “truthiness” in the body of the post and see what happens now.

In other news, things have been busy, but nothing has been really blog-worthy — sure, we had a beautiful 70-degree day while New York was getting socked with 27 inches of snow, but you could read that in the newspapers.

Possibly the most interesting thing we did over the weekend was go to the Kehillah production of Hannah Senesh.  As he introduced the play, the director (Kehillah’s drama teacher) said that he really couldn’t tell us to “enjoy the play”, and he was right.  It was a very meaty play for highschoolers to deal with, and they did a wonderful job.

San Jose Rep took advantage of a semi-captive audience during the production of The Immigrant and made it easy for subscribers to renew — they had a card preprinted with everything but our credit card number waiting for us when we sat down.  And they even offered an incentive: a free bottle of wine if we renewed that day, versus an implication that they’d be telemarketing subscribers who didn’t renew.

So we renewed our subscription (we were going to do so anyway) and brought our bottle home, where it would have spent some time in the wine fridge until its number came up.

But we’re not the only ones in our havurah who are Rep subscribers, and the other family brought their bottle to the Super Bowl party, so, of course, we opened it.  (Well, we opened ours, because it was already at the right temperature, but let that pass.)

The wine was a Cedar Brook 2002 Cabernet Sauvignon, and it was perfectly pleasant; it went well with pizza, and was fine with salmon the next night, too.  What struck me as interesting, though, was the text on the back label, which said that “Cedar Brook wines are produced exclusively for hotels and restaurants throughout the world.”  So I guess I won’t be restocking this one.

I was curious, though, and after a little research, I discovered that Cedar Brook is yet another label from the ubiquitous Bronco Wine Company, which is probably most infamous for its biggest seller, Two-Buck Chuck (aka Charles Shaw).  I’ve had a couple of their other wines, too (Black Mountain and ForestVille for sure, and probably others), all of which have been drinkable, unlike Two-Buck Chuck (which, I am happy to report, Trader Joe’s cheerfully took back).

Simon Phipps points out a conference that I am going to have to keep an eye on as the program develops.

When Diane came home this afternoon, she found a mysterious potted plant on our doorstep. 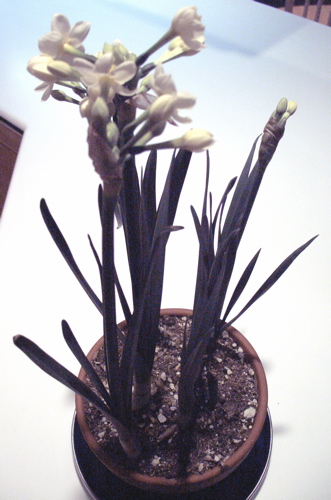 There was no note, and no indication of who left the plant or why. The best guess we have is that it might be related to the March of Dimes mailing which arrived today from one of our neighbors; at any rate, the card in that mailing had flowers on it.

Or maybe it was a SuperBowl party thank you.

Whatever the reason, it was certainly one of the nicer things we could find on our doorstep!

Yesterday, we went to San Jose Rep to see The Immigrant, a play about the experience of a Russian Jewish immigrant in Hamilton, Texas, where he started as a fruit peddler and ended up as a respected member of the community (and the only Jew in town), owner of the local department store.  I wonder how similar his story was to that of my grandfather, who was a Lithuanian Jewish immigrant and eventually owned a grocery store.  Even without that connection, I would recommend the play.

Today, we hosted our annual Super Bowl party — as usual, we had more than enough food (most of it of dubious nutritional value, especially the stuff I picked out!), and far too much beer (one six-pack, untouched).  The commercials didn’t seem to be up to the standard I expected of the Super Bowl; the best commercial, by far, was from FedEx.  Other notable commercials included the ones from Hummer, Sierra Mist, and the Bud Light magic refrigerator commercial.  But most of the commercials went in one eye and out the other — I’m glad I wasn’t paying for them.

The best news, though, is that my father-in-law is no longer homeless.  He and his girlfriend moved into their apartment yesterday after their stuff arrived from Valley Stream — they were lucky to be able to lease an apartment in the complex they wanted (Fellowship Square in Tucson) with only a six-week wait.  They’d been staying in hotels, with friends, and with family, but they said that moving from place to place every week or so was getting tiring, so I know that they’re happy to be firmly grounded again.