Five-day weeks should be stamped out — I’m not sure I got any more done this week than I did in last week’s three days, and I know I’m a lot more frazzled than I was at this time last week.

About the only truly constructive thing I am sure I managed this week was getting my oil changed before the “Maint Reqd” light went to solid yellow, and the only reason I did that was because my department had lunch at Pluto’s in Santana Row, and I didn’t want to drive all the way back to work afterwards — so I sat at the dealer’s and did email, much as might have happened in my office. I would have liked to have worked on “Think Fridays” programming project this afternoon, but the dealer’s waiting room wasn’t conducive to that much thinking.

I also started improving my vocabulary this week at Free Rice; I managed to donate 3000 grains during a conference call, and another 3000 grains while writing this sentence. I haven’t managed to get above level 49 yet, but I’m trying! Definitely a worthwhile endeavor, on at least two fronts.

I kept playing after originally writing this post and made it to level 50: 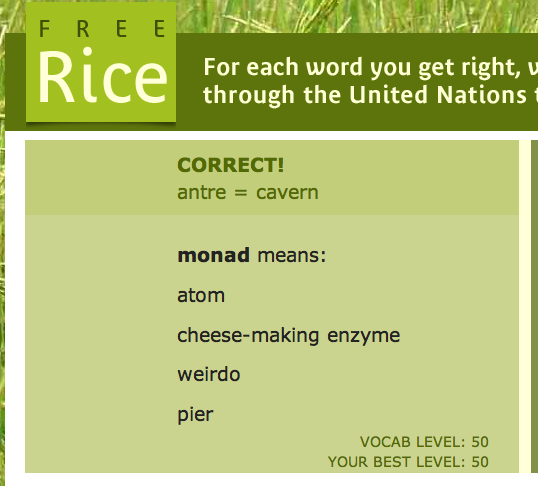 But other than that, it’s been a rather scattered week. I’m ready to call it a month, too.

, and I was impressed by the timing of the DVD release — just in time for Hanukkah. A nice, dark counterpoint to the Festival of Lights…what could be better?

Last week’s Wait, Wait, Don’t Tell Me had an interesting item at the beginning of Panel Round Two — they were reporting that there was a new slang verb in Hebrew: “L’Condel”, in honor of Condelezza Rice, meaning to run around and have meetings which produce no results. I thought it was amusing, and I could certainly come up with contexts in which I could use it. But I didn’t know how to properly conjugate it…or even how to spell it, since Hebrew has two letters for the ‘k’ sound. But I did a little Googling and found what seemed to be the original reference, from a November 12th New York Times article.

Later, I was chatting online with a colleague from IBM Israel, and I asked her if she had heard the verb, or how it would be spelled. She hadn’t heard of it. So I decided to Google the two alternative spellings I could come up with, and discovered that there were no hits for ×œ×›× ×“×œ, while ×œ×§× ×“×œ had many. But what was odd was that many of the hits were several years old, which made no sense.

My friend, in the meantime, had done additional research; since she actually speaks Hebrew, she knew that “L’Condel” had to be spelled with an additional vav — ×œ×§×•× ×“×œ — to force the “oh” in “Condelezza”. What I’d found was the prepositional phrase “to Kendall” (as in, “I gave advice to Kendall”) — completely unrelated to my quest.

She could only find one citation in Hebrew on the web, which said that this was a new verb being used among the Israeli administration meaning going in and out of meetings with little said and done.

I clicked through and discovered that the page was the “Daily Alert” from the Jerusalem Center for Public Affairs. I searched for ×œ×§×•× ×“×œ on the page — and interestingly, it was in a paragraph headed “New York Times”.

So I cut-and-pasted the first few sentences of the paragraph into the Hebrew-to-English translator from 1-800-TRANSLATE…and sure enough, it was the same article from the Times that I’d already found in English.

I hope that “L’Condel” is real — but I find myself wondering. And I still don’t know how to conjugate it.

I was called for jury duty in mid-October, but the timing was bad, so I chose to postpone it to this week, knowing it was a three-day week and hoping, like Susan, that there would be few, if any, trials beginning this week.

I was nearly wrong.

Even though my group’s status was always “check back after 5pm”, I did keep a close eye on the jury status page. They called in a few groups on Monday…but that was it.

I’ve served on trial juries twice before, and felt I was making a contribution to the community, but I’m thankful to have been able to stay out of the courtroom this year.

So, as nearly everyone in the blogosphere has already reported, Amazon announced the Kindle

today — their attempt at reinventing reading.

I read Steven Levy’s Newsweek story over the weekend, and I must admit to being intrigued by the possibilities. And if I were doing a lot of flying, I’d be even more intrigued — the idea of having many books with me but only carrying one item is very appealing.

But I’m not flying much these days (with any luck at all, no more this year). And I’ve paid the early adopter’s price once this year already.

So I think I’ll wait for the next episode in this movie — but if you feel like giving it a shot, feel free to click the link above to order!