I’m in transit at LAX on the way home from my father-in-law’s 90th birthday celebration in Tucson. I flipped on my iPhone after landing and was greeted by an unexpected menu option: 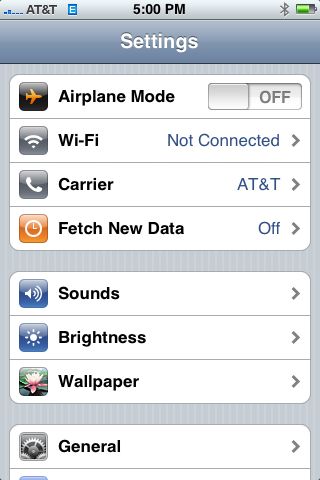 This is an obligatory test posting from WordPress for iPhone.

Move along, move along, there’s nothing to see here.

So far, I’ve resisted the temptation to buy an iPhone 3G, but I did upgrade both my phone and Jeff’s to the new software. I cheated and upgraded mine on Thursday — it was painless, as was the process of picking up some of the free apps from the App Store. So far, I’m unconvinced that NetNewsWire for the iPhone is better than the iPhone-optimized NewsGator site; ditto for Twitterific versus Hahlo. But Remote is great, and AOL Radio is handy, at least in Wi-Fi enabled areas.

Upgrading Jeff’s phone was another story. I waited until late last night, after seeing some success stories on Twitter, because I didn’t want to brick his phone. And it took several tries (I think I had a loose cable) to successfully upgrade, and looking at the system logs during the process was probably more alarming than comforting, especially when I started seeing messages like “MobileDevice: AMDeviceConnect: This is not the droid you’re looking for. Move along, move along.”

But after longer than I expected, his phone was up, running, and activated. Then I tried to download some of the free apps.

Using the online app store was easy, but the application never got loaded — instead, a message popped up telling me to download it on the computer and synchronize the phone. But downloading on the computer failed, with a popup saying “Unable to check for purchases” and suggesting I try later.

So I tried this morning, with the same lack of success. And nothing on the Web gave me any better help. But eventually, I pieced together a solution:

And now I (or he) can successfully purchase free apps over the air, just as it’s supposed to work.

I did notice one other nice feature of the 2.0 software — when typing in a password, it leaves the most recent character visible until you type the next character. That makes the job much easier than it was before, especially when typing a strong password with case changes.

Now, there’s just one problem left — we have to go to the Apple Store tomorrow to buy a computer or two. And I’m not always good at resisting temptation.