Google has become part of my daily life, but every so often, I am still amazed by what it makes possible.

This morning, while washing some dishes, a tiny fragment of melody from my childhood popped into my head — it was a line from some novelty song that I think we’d sung in elementary school. I’d never known the name of the song, and all I could really remember of the lyrics was this:

[something] is a raccoon….always hungry, very hungry….he sings [something else]

I couldn’t get the little bit of music out of my head, so I wondered if I could find out what it was.

I typed “always hungry very hungry” raccoon into Google and got two results, both of which were from Japanese pages, and both of which had a bit more of the song in the translated search result fragment. I clicked on the first one and was greeted with a page of imperfectly translated Japanese; searching on “raccoon” brought me to an entry with this text:

this song is sung by Arthur kit

and with a picture of an Eartha Kitt album in the left margin of the entry: 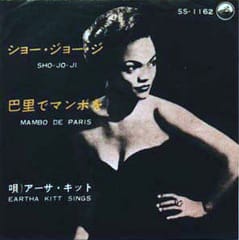 So I went back to Google and typed Eartha Kitt raccoon; the second hit was this YouTube video-free video, with Eartha Kitt herself singing the song, Sho-Jo-Ji (the Hungry Raccoon).

Elapsed time from wondering to result: about 90 seconds.

There are times I wish I could Google the workings of my mind, but perhaps I’m better off not knowing myself that well!

Merlin Mann made one observation during his OmniFocus talk that I thought was useful enough to repeat (partially as a way of solidifying it in my own mind!).

Even though he’s Mr. Inbox Zero himself, he leaves items in the OmniFocus inbox until he knows what he’s going to do with them.

Thinking that way encourages the use of OmniFocus quick entry to quickly capture ideas and thoughts — I was shying away from using the quick entry box because I felt compelled to process the ideas immediately, at least to the point of assigning them to a context and project. But this morning, I dumped five things into that inbox during an early-morning call and left them there until I had a break in the action mid-morning; then I processed them all and was able to send four of them off for action almost immediately. It’s a much more fluid workflow.

I tried to make it to Macworld last year, but work got in the way; this year, I did a better job of defending my calendar (and having the expo include Friday didn’t hurt, either) and was able to make the trip.

IBM (mostly Lotus) was out in force — they were greeting attendees at the bottom of the escalator and promising “sweet tweets” at the booth. And they delivered, with a nice “candy bar” (which was completely depleted well before lunchtime). In addition to the calories, they had four pedestals set up, showing Lotus Sametime, Lotus Notes, and Lotus Symphony (all of which I happen to have on this very computer, imagine that!), as well as Lotus Connections (which lives on servers) and LotusLive (which lives in the cloud).

Microsoft had a big booth, too, but not much content — they were showing Office 2008 for the Mac but talking about Office 2011 (which will be ready late this year). I suspect that the show cycle didn’t match up with their development cycle as well as they’d hoped.

I suspected I’d be making a few impulse purchases at the show, and I was right — the first one was from 4iThumbs. It’s an iPhone screen protector with bumps, designed to help you learn the virtual keyboard; I played with one and decided it was worth gambling $15 (show price) to see if it can help me type more accurately on the phone. I haven’t yet actually installed it, but maybe I’ll get to it tonight.

Two years ago, I picked up an earbud Jack to keep my earbuds from tangling, but it wasn’t a good match for my FrankenBuds. So this year, when I saw the Budsock, I insisted on a tryout before parting with my $4 — the earbuds were barely small enough to fit, and it works. Recommended.

The last impulse purchase this year was a pair of RichardSolo 1800 external iPhone batteries (at two for $50, how could I resist?). I’ve already used one to get me through a long day of GPS mapping, and the other one’s on a truck to New Orleans. So far, so good — though I really don’t know why they added the LED flashlight and the laser pointer.

The only talk that I really wanted to see this year was at the OmniGroup booth — Merlin Mann gave a talk on “Advanced Secrets of the Omnifocus Ninja”. Since I’m using both the iPhone and Mac versions of OmniFocus to help manage my life and get things done, I thought it’d be an hour well-spent (or at least one which generated amusement), and I was right — Merlin’s demo has helped me get a handle on perspectives, one of the most useful features of OmniFocus. And Merlin’s schtick was funny, too. But I got my best tip before the presentation, talking to one of the real Omni people — use Yelp bookmarks to keep track of restaurants to try, rather than OmniFocus. A tool for everything, I guess.

Scanners were big — both Fujitsu and Neat had large booths (nearly adjacent), and there were a few other vendors. I had hoped to get a deal on a Fujitsu ScanSnap at the show, but they weren’t selling there; fortunately, Costco has them on sale this month, and one is wending its way to my door even as I type this.

Most of the iPhone app developers were in one area, packed four to a tiny table — it was crowded, to say the least. Microsoft was there with their Bing app, cheek-by-jowl with one-person outfits. I had an interesting conversation with the developer of Snoring U. Smule, the Ocarina people, were there with several amusing apps. And I spent some time catching up with John Wolpert of Cabulous, which would be a good tool to have if I ever needed a taxi in San Francisco. There were several GPS apps, and lots of picture-sharing tools, too.

Headphones were another popular category — Sennheiser and Shure both had huge booths; I was amused to see Shure was selling phono cartridges, even one for 78rpm records. And, of course, there were many vendors selling cases for MacBooks and iPhones — and iPads. I think I’ll wait until I have an iPad before I buy a case, though.

I wasn’t sure how well Macworld would do without Apple — but I think it came through just fine, and I hope to return next year.