I was Toastmaster of the Day at my Toastmasters’ club this morning and chose “We, the People” as the theme in honor of Constitution Day. I also worked in the founding of San Francisco and Emperor Norton’s proclamation of his empire, since those both happened on September 17th, too. 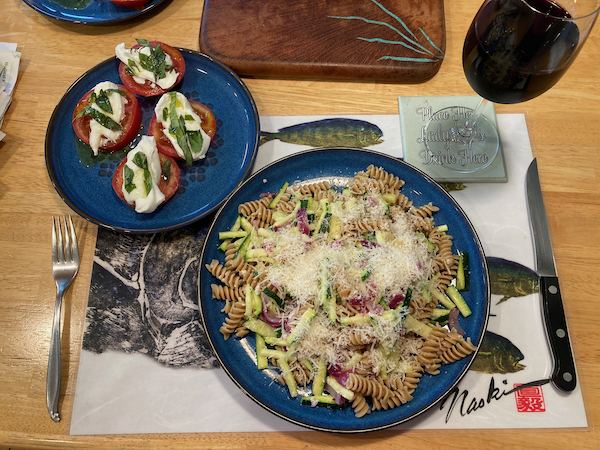 Lunch today was a new recipe (Zucchini with Rotini plus a Caprese salad) from an old cookbook, Marian Burros’ Keep It Simple. We’ve had the book for more than 30 years (it was published in 1981) but there are still quite a few recipes we haven’t tried – this was one of them. The book starts with a long chapter on the politics of food (including a caution about high fructose corn syrup!), partially to convince the reader that it’s healthier to make your own food from fresh or minimally-processed ingredients than to buy packaged foods. It was amusing reading the recipe and being told that “if you can’t find fresh basil, pick a different recipe” and that “some supermarkets are beginning to carry fresh herbs” – I guess some things have changed for the better in the last 40 years!