The Day of Atonement, Yom Kippur, is a very long day. Even when we had services in person, there was a break between roughly 1-3pm – that was even more necessary this year, with services on TV. But it’s not exactly a break – instead, there are always study sessions and opportunities to reflect. Or you can go home and take a nap, which we’ve been known to do!

This year, Rabbi Hugh Seid-Valencia from Jewish Silicon Valley led a session on Jewish mindfulness meditation, and both Diane and I attended. There was a short focusing meditation, then some discussion, then a 15-minute meditation, and that was it. Rabbi Hugh suggested meditating on the breath, since it’s always with you; I tried it, and the 15 minutes went by very quickly indeed. Thoughts came into my mind and left on their own; I felt refreshed afterwards.

I’ve been meditating almost every day since Yom Kippur. It’s a wonderful way to spend the time between getting a desensitizing shot and being allowed to leave (it’s certainly better than looking at Facebook and Twitter). And it’s a change of pace – a quiet time.

Today, we’re flying East for my 50th Reunion. We splurged and got seats at the front of the plane, so there’s a bit of room. They fed us soon after takeoff; we have several hours before landing, so we both meditated for part of the time. Noise-cancelling headphones helped – people are talking, but I’d have to try to hear them well enough to understand what they were saying, so I could ignore them (the same as when I meditate at the allergy clinic). When I opened my eyes, I discovered that a flight attendant had come by and taken away my empty cup, so I guess I was really focused on my breath and not the world around me! 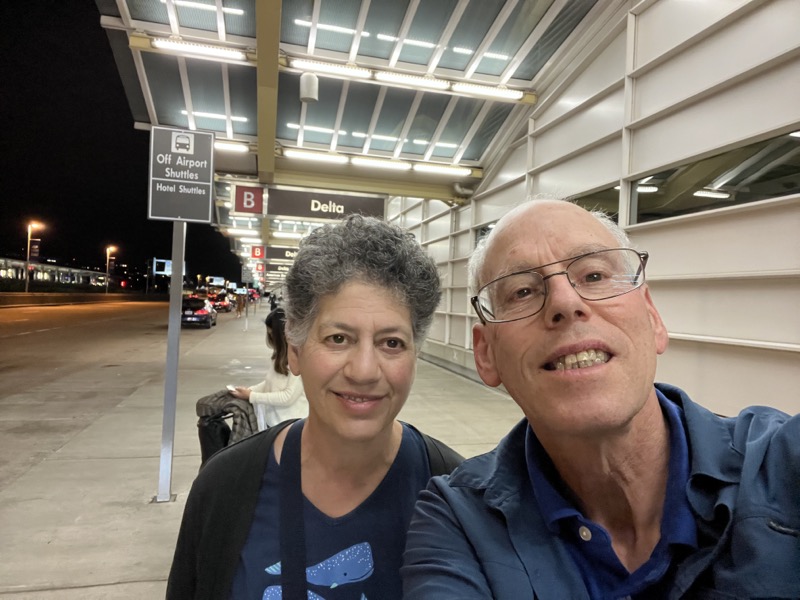 When we arrived at Washington National, I was pleasantly surprised to find a comment on yesterday’s entry from the founder of RxGo explaining the price discrepancy I wrote about yesterday. It turns out that the list price of the toothpaste increases linearly with the number of tubes you get, but the discounted price doesn’t; I’d searched for the price of one tube ($10.56); the discounted price for three tubes is quoted at $16.67, which is more than I paid – a pleasant surprise indeed. You can read his entire reply here; thanks, Jeremy, for explaining what was going on and for providing a valuable service.