For the past week or so, Facebook has not been letting me tag Diane in the postings I make there (especially those pointing to the blog), at least not from either Mac (it fails from Safari, Chrome, and Firefox, too!). She doesn’t even show up in the list of people it suggests, and neither she nor her namesake in England show up if I search for her. But I can tag her from my phone. Go figure. 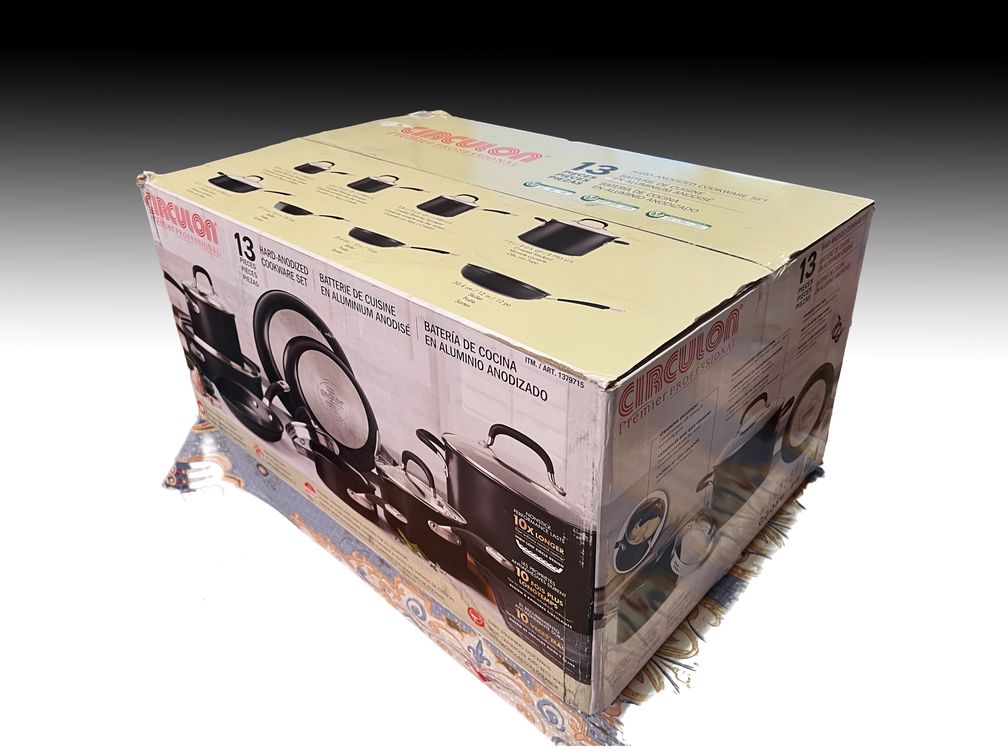 We took another step towards induction-cooking bliss today; our new cookware arrived (Circulon from Costco, suggested by our friend Sam). We used a couple of pieces, both on our little induction cooker and on our conventional stovetop, and they seem fine so far. We spent a good part of the evening preparing the non-induction pots and pans for donation – I’m going to wait until we get the new cooktop to actually donate them, though.

I just finished chairing the Shir Hadash Ritual Committee meeting – it’s a collegial group and we stay focused and get through the agenda. But even with a good group and a solid agenda, a nearly two-hour meeting takes a lot of energy – and now I have to take my notes and turn them into comprehensible minutes.

Perhaps I’ll have more to write about tomorrow. Or more energy. Or both.

We saw Native Gardens at City Lights Theatre this afternoon. It’s a timely story about what happens when new neighbors with new ideas move into an old neighborhood; the cast was excellent and the set was amazing. If you’re in the South Bay, I recommend going; if you’re not ready to go to the theatre in person yet or aren’t local, they plan to make a recorded version available soon. 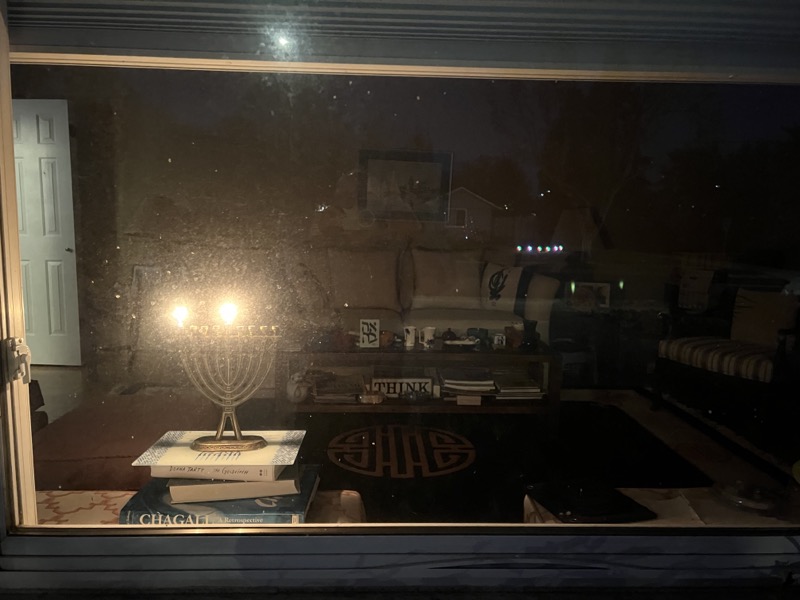 This evening was the first night of Hanukkah; we celebrated by having a Chicken Tikka pizza from Curry Pizza House. That wasn’t our original plan for dinner, but the chicken thighs I’d bought to make Sheet Pan Cilantro Chicken with Kale hadn’t defrosted enough to marinate by the time we left for the theatre, so we’ll have that tomorrow.

We had a quiet Shabbat; I was surprised and pleased that we had 15 people at services on Zoom this morning.

This evening, I imported the photos and videos of the monarch butterflies that I’d taken with my big camera. Some of the still shots with the big camera were nice – being able to zoom in helps. 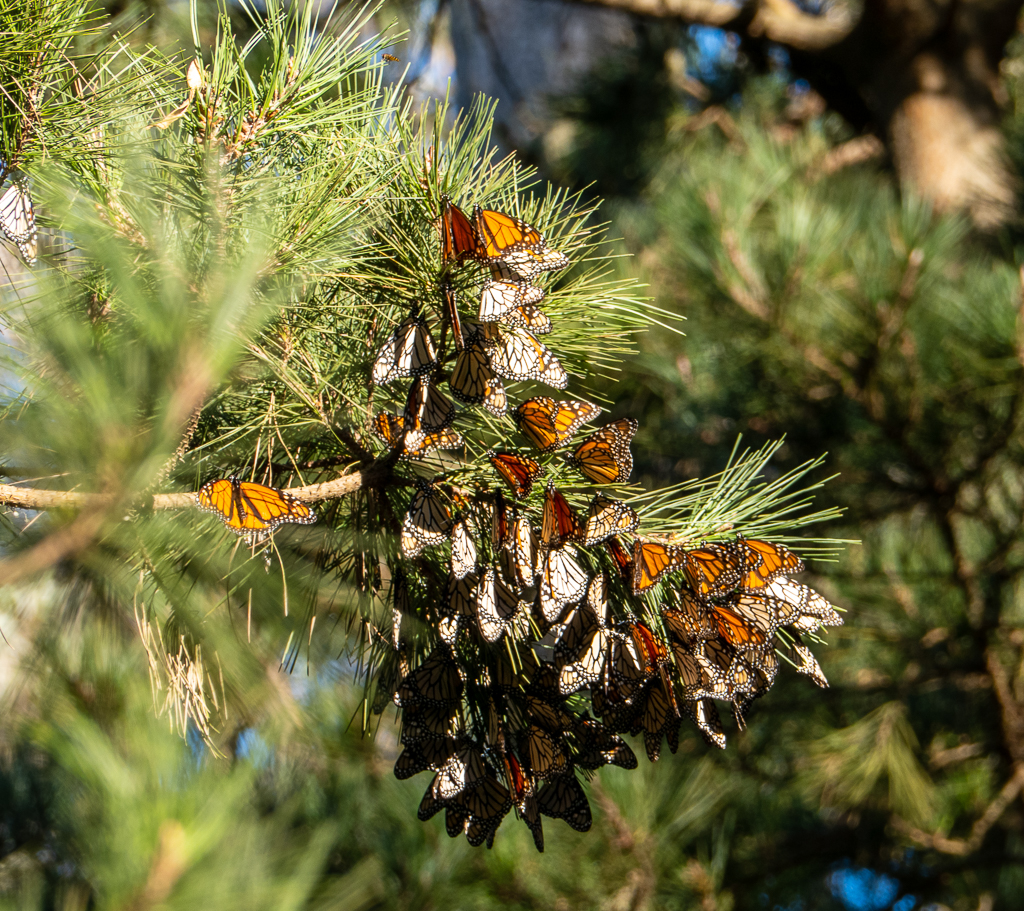 Many of the videos were unwatchable because of camera shake (I didn’t have a tripod). I am really impressed with how well the iPhone 13 Pro does image stabilization! I tried stabilizing one video with iMovie, and it helped, but it’s still a bit shaky.

It’s good to practice before going to Africa next year (I hope). 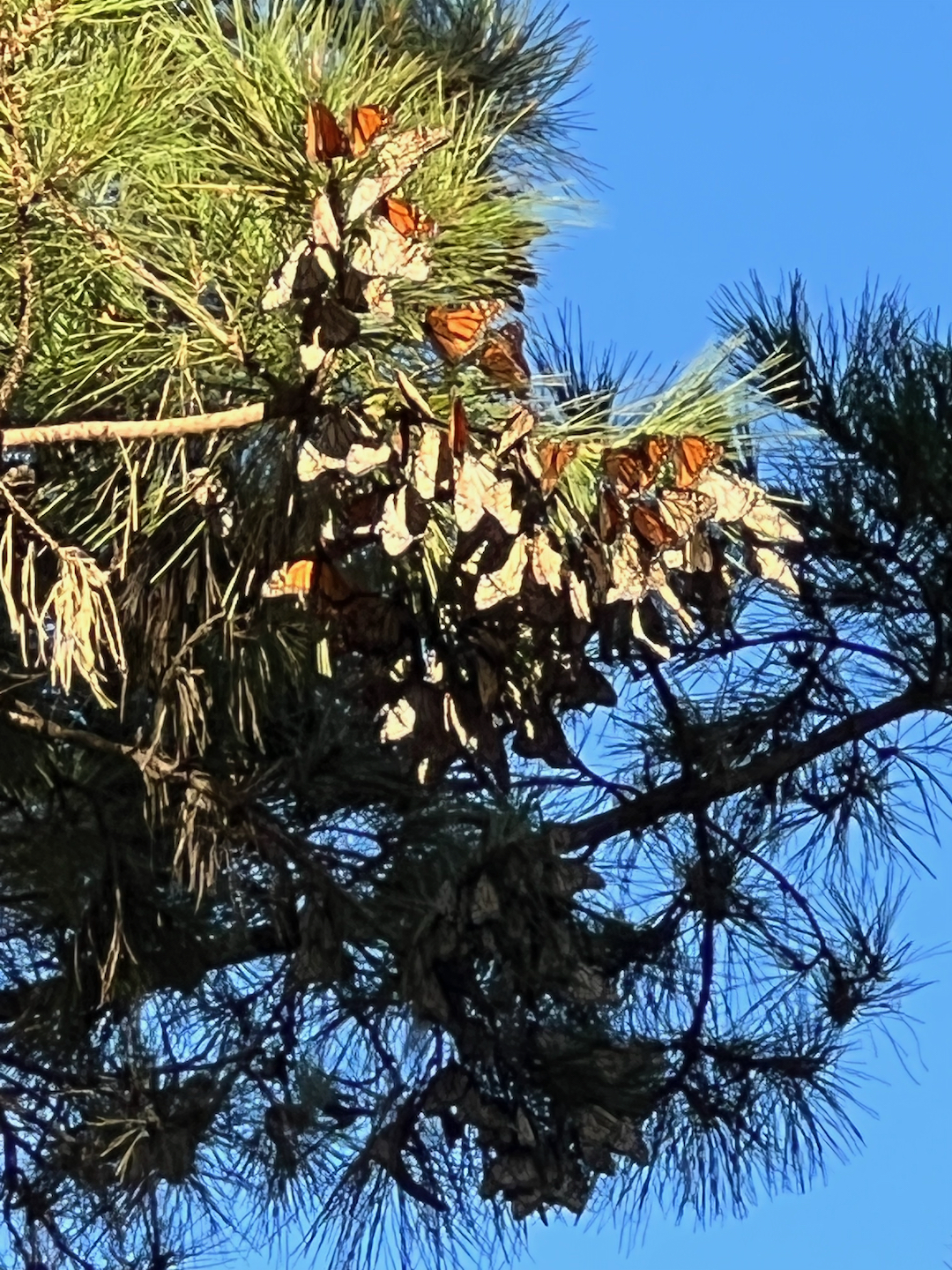 Lance Milbrand is one of the members of the Silver Tongued Cats Toastmasters Club. He’s also a very talented nature videographer; last week, he sent the club a short video he’d taken at the Pacific Grove Monarch Sanctuary. It was beautiful and inspired us go to there today.

Traffic was not kind; the trip took nearly two hours each way. But it was worth it to see the butterflies with our own eyes (and with binoculars, which I highly recommend), as well as to take some photos and video. My video isn’t as good as Lance’s, but here it is!