Our 2005 Prius has been making a funny little pulsing noise for a couple of months; it seemed to be coming from somewhere near the left front wheel. The car still drove well and the radio easily drowned out the noise, so I didn’t do anything about it.

A few weeks ago, the “Check Engine” light came on. I drove the car to a local parts store so they could read the code, but by the time I got there, the light was out. They found three codes – one was for a capacitor circuit malfunction, one was a battery issue, and one was a coolant flow problem. They couldn’t tell me which was the most recent code, so I decided to wait and see if the light came back.

It did. I tried to make an appointment with my mechanic, but never quite connected – and the light went away again.

It returned on Friday; this morning, I was on the phone with the mechanic as soon as they opened and made arrangements to get it diagnosed today. Their scanner was considerably more elaborate than the one at the parts store – and the person running it was more knowledgeable, too. The scanner showed two P1121 codes, which indicate the coolant control valve is shot. Said valve is located near the front left wheel well (near the headlight), which matches the noises I was hearing.

They’ve got the part on order and will take care of it on Wednesday. This is only the third problem we’ve had with the car in 17 years, so I guess I can’t complain! 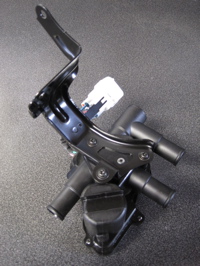 2 thoughts on “An unfunny little noise”