This morning, I got up a little earlier than on the previous days and decided to actually accomplish something today. So, after breakfast, I ran errands for an hour, picking up a stepladder, some stuff from Loctite which, if I’m very lucky, will let me fix my outside light, gasoline, bagels, and cream cheese (I already had the lox). Then I used the Loctite stuff (we’ll see if it worked tomorrow) and did some other miscellaneous work; we had lox and bagels for lunch.

Then we went to see Chicken Run. It was great fun; highly recommended.

After the movie, we walked down to the other end of the shopping complex (can I call it a mall if it’s not enclosed?) and bought a scanner — a Umax Astra 3400. It seems to work, and now I can scan in the Japanese Pokemon which Jeffrey wants to sell on eBay, such as this one: 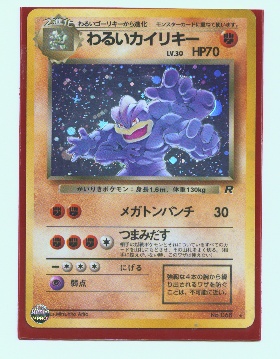 Time to watch another movie, this time on the DVD player:
Bride of Frankenstein. I didn’t like it as much as the original — the music put me off (there were times during the scene where the bride is being brought to life that I could swear I heard “Bali Hai” from South Pacific). But it did have its moments, and Diane and Jeffrey both liked it better than the original.