Another day of mostly mundane activities, with little of terrific interest to write about (or rant about). But I won’t let that stop me from flipping my page.

A few weeks ago, my cellphone fell out of my pocket onto a hard floor, antenna-first, and the case cracked a bit around the antenna. Since then, I guess it’s been shedding plastic 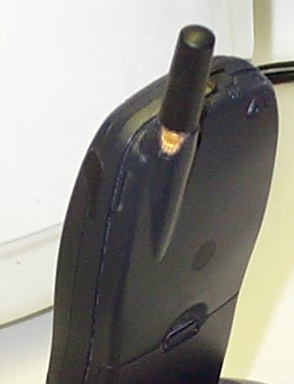 So I stopped by the Sprint store to ask what their replacement policy was, and found out that it was very simple and straightforward: I could have any phone in the store and I’d only have to pay the full retail price. If I’d bought the insurance (at $4/month), they’d’ve been willing to replace my phone with the same model for a mere $35 deductable.

I’m going to try to continue using my phone until the antenna falls off. And I think I’ll make sure that my next phone has a replaceable antenna.

On the same trip, I stopped at Central Computers to pick up a print server. They had the Netgear PS110 two-port server for $113, and an unknown brand’s one-port server for $99. I’m not sure if I’ll ever need a second port, but I decided to spring for the name brand.

Setting up the server took about five minutes; setting up the software each machine took about as long. And then I was on the air. Not very difficult; not very adventurous; this stuff sometimes actually works!

I didn’t join in the Behind the Curtain project because I didn’t think I’d have any interesting pictures to share — that, and because I’m way behind in editing the pictures I’ve taken in the last few months. But now that I’ve looked at a few of the contributions, I wish I had joined in; I appreciate the glimpses of life from those of you who did share your days.

It must be nice to be an optimist

Al points out an interesting story on women’s water polo at the Olympics. But I’m afraid NBC would never show those Olympic Moments!