But this time, I had two things going for me: first, the only flight on Midway left at 3pm, giving me not enough time to be useful at IBM and plenty of time for a visit; second, I’d been specifically invited to visit — thanks to my second-line manager’s homepage. John, besides being one of IBM’s best Internet ambassadors, is a long-time ham (I don’t know how active he is), and got a query from Jim Haynie, W5JBP, the president of ARRL, asking whether IBM had any ham radio clubs. John passed the question on to me, since he knew I’d been involved fairly recently (sometime, I might tell the story of the Loma Prieta earthquake), and I was happy to be able to tell Jim that yes, we did have active clubs. We kept corresponding, and he invited me to let him know if I was ever going to be in the area because he’d ensure I got a good tour. So last week, when this trip came up, I dropped him a note, and he made good on his promise.

I got to ARRL Headquarters a little after the 10am tour time, but that wasn’t a problem; they were expecting me, and the League’s Executive Vice-President, Dave Sumner, K1ZZ, came out to meet me and chat for a couple of minutes before going back into his meeting; he turned me over to Brennan Price, N4QX, who gave me an individual tour of HQ and then took me over to W1AW so I could go on the air.

I could have gone on the air on VHF or UHF, but there would have been nothing interesting in doing that — that’s where I’ve done all my operating. I wanted to operate HF, where there was a chance of contacting someone far away. I’m currently a Technician-Plus, so I’m only authorized to operate voice in a narrow sliver of the 10 meter band (28.3-28.5 MHz) — there was no point in trying to operate Morse Code, because I haven’t used it since passing my original exam, 12 years ago.

So a few minutes later, I was sitting in front of a brand new Yaseu Mark V FT-1000MP, connected up to a serious antenna farm, ready to go on the air with one of the best-known callsigns in Amateur Radio. I called CQ and waited. And waited. And waited. Then I changed frequencies and kept trying. And waited. Then I rotated the antenna in hopes of working a different part of the world — I could hear stations, but I couldn’t get anyone to respond. I even waited for contacts to end in hopes of getting in touch with one of the stations, but that didn’t work, either — at 11:45, Dave came to pick me up for lunch, and I still hadn’t worked anyone. Oh, well, I can try again another time, and I did get a nice certificate confirming that I have operated W1AW. 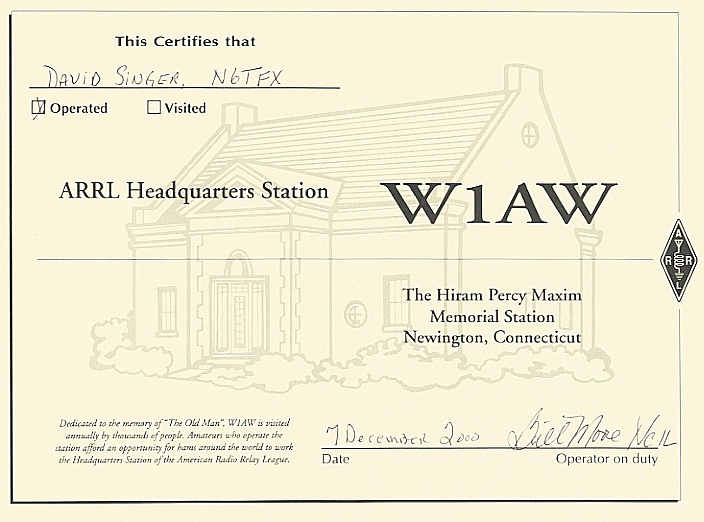 I also renewed my ARRL membership (to be more accurate, I rejoined, this time as a Life Member) and picked up the General Class study guide; now that I won’t need to pass another code test to upgrade, I shouldn’t have any problems doing so, and then I’ll have more chances to make contacts on my next trip.

It was still a good way to spend the morning. Now, on to my flight home!