While I was in Cambridge last month, I happened to find a store called “All Wound Up” which mostly sells moving toys (battery-powered for the most part, despite the name). But they also had something I couldn’t resist getting for Jeffrey — a pair of wristwatches which are also wrist radios (operating in the Family Radio Service). As you can tell from the picture, the watch is a bit larger than the one Dick Tracy wore in the comics, but I think it’s an amazing combination anyhow. 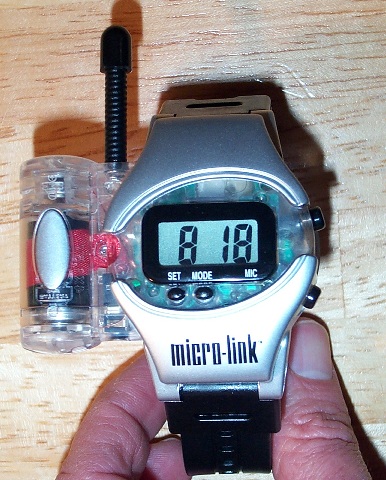 I suspect Dick Tracy’s watchradio worked better than this one, but Jeffrey’s having fun playing with it anyway (and will probably have more fun tomorrow when we visit friends his age). As for me, I think I’ll stick with Amateur Radio.

We saw Miss Congeniality today. We were using up some Customer Service Passes from AMC Theatres which were going to expire in a week; I don’t think we’d’ve necessarily gone out of our way for this movie otherwise (I wanted to see Charlie’s Angels but was outvoted), but we all enjoyed it, and I’d recommend it if you don’t have to pay too much.