While I’m waiting for the car service to show up to take me to SFO so I can fly to Haifa (and then on to Hursley and Paris), a few timely or amusing links:

More later from some airport, perhaps….

A preview of the next recession

Much to my surprise, checking in for the flight to Tel Aviv was as quick as checking in for any other international flight — the other times I’ve flown to Israel, I’ve had to hand-carry our checked luggage to the super X-Ray machine before they’d take it — but in both cases, I was changing airlines in London from American to British. This time, the trip is all on TWA, and I guess they handle Tel Aviv luggage often enough that they know how to do it without making me do the schlepping.

Since I had plenty of time to kill before my flight, I decided to circumnavigate the airport and look at the art exhibits. SFO runs a very active museum program, and the exhibits are often very interesting; today, I enjoyed the exhibit of police headgear through the years and around the world and the exhibit of strange collectibles (swizzle sticks, Elvis memorabilia, anything with “Bluebird” on it, to name but three) and interviews with the collectors. Unfortunately, they were in the process of changing over a couple of the exhibits, but it was definitely better than sitting around for an extra hour.

My route took me through the Central Terminal, which was the International Terminal until late last year. Now, it looks like this: 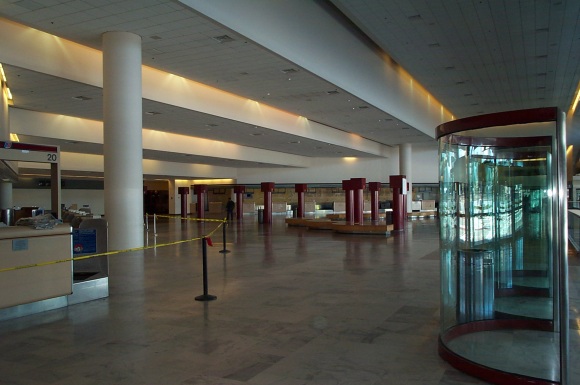 I hope it’s not a preview of things to come if we slip into recession — my driver was telling me that the car service’s business has definitely fallen off in the past few months.

Now, onward to JFK and TLV!