This is going to be a short entry, I’m afraid, because I’m spending all my time actually attending sessions and talking to people at WWW10 — too busy to have fun!

Yesterday, TimBL gave a keynote on the full potential of the Web, especially how the Semantic Web will lead us there. The slides are on the Web (of course) but I can’t find them.

And then I spent the rest of the day attending sessions as a member of the Awards panel for the conference.

Today, I’ll be at one session in my role on the Awards panel, and then will be spending the rest of the day in the Web and Society track, seeing the fruits of my term as co-chair.

Pictures are unlikely until the weekend, but stay tuned anyway.

The Web and Society Track has now had two sessions, and both went well, I think. The first was a panel on privacy, which, I’m afraid, came to no new conclusions; the second, which I chaired, was a panel on “The Web and Everyday Life”, which had three presentations dancing around that theme. Again, no new conclusions, but some interesting discussion.

Lunch today was a wonderful piece of salmon, and now in a few minutes, it’ll time for the official conference dinner, which will be an “extravaganza” — which I suspect means another ten-course banquet. Dining out in the US is going to seem so pedestrian after this trip.

I was right — the conference dinner was, indeed, another ten-course banquet, this time held in the Grand Hall of the Hong Kong Convention and Exhibition Centre, where Hong Kong was officially handed over from Britain to China in 1997 (we happened to be in England that day and watched some of the coverage on the BBC; at the time, I never dreamed that I’d be in Hong Kong, much less in that particular room!).

The room was so grand that I couldn’t take pictures which did it justice; the best I could do was get a few snaps of the acrobats who entertained us between the fourth and fifth courses. 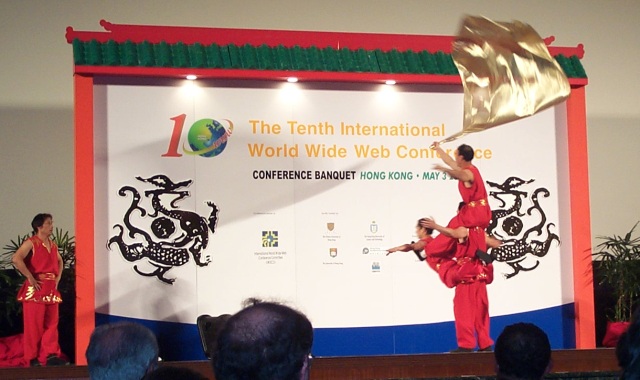 I outwitted the caterers, though; instead of sitting at a table with vegetarian food, I sat at a “regular” table and skipped the courses with shellfish, so I only had to deal with a six-course meal. In comparision, I guess it was like getting a meal from the diet menu!