Or even if you’re just plain busy, as I’ve been the last couple of weeks. In short, since I last wrote, I’ve:

Tomorrow is Jeffrey’s birthday. For a change, we’re having the party on his birthday instead of weeks later — so we’ll be busy tomorrow.

And on Sunday, I fly East again for an e-tirement party for my old boss and my group’s annual kickoff meeting. The weather was pleasantly warm there last week — I’m hoping for a replay. It’s certainly been cold here!

More anon, maybe even with pictures.

This morning, I awoke early and intended to go to the hotel fitness center to work out. But when I got there, I found out that they charged $8 for access to a rather mediocre workout room, and I felt offended. So I went outside and ran by the beach instead — that was a far smarter choice!

But now I’m back in the meeting for the forseeable future. Work is hell.

The room we’re meeting in is across from a corridor separating us from the window which separates us from the beach, so we have to put up with this horrible view during the meeting. 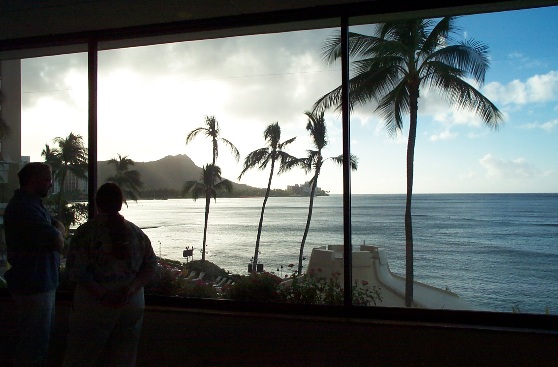 Here I am at my hotel; the flight was uneventful, and even shorter than expected (I guess there were some tailwinds helping us), but whatever time I gained in the air got lost when I decided to take the shuttle bus to Waikiki instead of a taxi.

During the flight, I finally got around to watching Buckaroo Banzai; I’d forgotten how strange a movie it is. It might make more sense if I didn’t have to try to hear the dialog over airplane noise…but then again, it might not.

I’m not used to having to stay up late when I travel — I usually have to pretend that I’m tired too early because morning is going to come too soon; this time, though, I need to stay up a bit later than usual. But it’s almost late enough to call it a night, so I will.

For the first time since November, I’m in the familiar confines of the San Jose Admiral’s Club, awaiting a flight. The last time I was here, I decided not to fly at the very last minute, after boarding had started for my flight; I was nervous because of a crash earlier in the day, and then Windows decided to go into a permanent blue screen, and that was the last straw. I went home.

I hope to actually take today’s trip — the news has been better, and I’m not going to screw around with my computer’s configuration (which was probably the cause of the BSOD last time). Somehow, the destination this time (Honolulu) appeals more than Austin did, too!
But I’m still far more nervous about travelling than I was before 9/11.

Airport security was noticeably different than it was last time; I didn’t have any hassles, other than having to juggle all of the electronics I took out of my briefcase and pockets, but I did see them asking people to put their shoes through the X-ray machine. I’m not convinced that adds any real security, but it probably makes people feel better.

Last night, I made the mistake of finishing Dave Barry’s Big Trouble before going to bed. It’s a funny book — but the second half is far less funny since 9/11 than it was when it was published, and I’m not sure that I want to see the movie when it’s finally released (it was originally scheduled for 21 September, and I think the studio made the right choice in delaying it).

Thinking about the book kept me awake for a while; then I realized that I had no idea where I’d put my upgrade certificate for today’s flight, and I jumped out of bed to go find it. It took a while, but I was successful — and in the process, I found the cellphone charger I’d put away while cleaning up for our New Year’s Day party and had been unable to find ever since. I’d’ve rather had the extra sleep.