Our travels today took us to Valley Fair (err, “Westfield Shoppingtown Valley Fair”), and I decided it was worth wandering over to the Apple store to see if I could look at an iPhone. There was a crowd by the entrance looking at an official demo, but I wandered around the store and found a salesperson with an iPhone and no one talking to him, so I filled the gap.

I did a tiny bit of web surfing (slow, even using the store’s WiFi network), and played a bit with the text keyboard and iTunes. I didn’t make any phone calls.

I’ve hit the point where I’m ready to replace my existing phone, a Motorola 551 — its audio, never great to begin with, is showing signs of wear and tear, and I’ve never liked some of the features. But even though the iPhone is very cool indeed, I don’t think it’s the right answer for my needs, and so I handed back the phone and went on my way.

The 100th anniversary of the War Between The States Civil War was, unsurprisingly, a Big Deal in Richmond. One of the ways in which it was celebrated was by building a special temporary museum downtown, the Virginial Centennial Center, and, as a schoolkid, I was taken there on a field trip.

I don’t remember many of the details, though I’m pretty sure that the exhibits slanted towards The Lost Cause view of the war; I do remember that they had some interesting dioramas portraying key battles, with moving lights and other high-tech 1960s effects.

The Centennial Center closed in 1965, though the building still remains (though it’s due to be demolished soon). But now there are two Civil War museums side-by-side in downtown Richmond, next to the James River and Kanawha Canal. One is part of the Richmond National Battlefield Park; the other, The American Civil War Center at Historic Tredegar, is run by a private foundation. They share a parking lot, which is convenient.

Both museums were better than what I remember of the Centennial Dome, but if I only had had time for one, I’d go to the Park Visitor Center. It told the full story, with much less repetition, and with fewer noisy displays. And it was free. I don’t mind having gone to the Civil War Center, but one visit there was enough (they do, however, validate parking!).

We’re in Richmond for the first time since my Mom’s funeral, so our first stop was her grave. It was the first time any of us had seen the marker, and of course Diane and Jeff had had to miss the funeral last year, so it was an emotional stop.

But then it was time for something completely different: a trip to Dave’s Comics and Silly Ass Toys so Jeff could pick up the current batch of comics in his subscription and we could talk with Dave, Marlon, Wendy, and Sheryl about old times, old friends, new toys, taxes, and spam.

Most of those topics aren’t of much interest to anyone but those involved (and taxes and spam will, I’m afraid, always be with us), but some of the toys were interesting. Dave showed us a Laser Star Projector — but he didn’t have one available for sale at the present time, so I won’t link to it. I will, however, sing the praises of one toy we’ve had for a few years, the Airzooka, which I really ought to bring into the office for those days where shooting something would be a good idea except for the consequences!

Dave recommended The Tavern in a small shopping center across the street, and it was a good choice. Not too noisy, all non-smoking (I think that’s still an issue here), tasty, and friendly. Worth another visit.

After that, we spent the rest of the afternoon in another cemetery, Hollywood Cemetery. I hadn’t been there in many, many years — when I went as a kid, I remember being somewhat frightened by the signs at the entrance reading “One Way In”. Those signs were gone, but the permanent residents remain, including two US Presidents (John Tyler and James Monroe) and one Confederate President (Jefferson Davis, of course). And one possible future president wanted to have his picture taken with all of them, but I’m only going to post one, at least tonight: 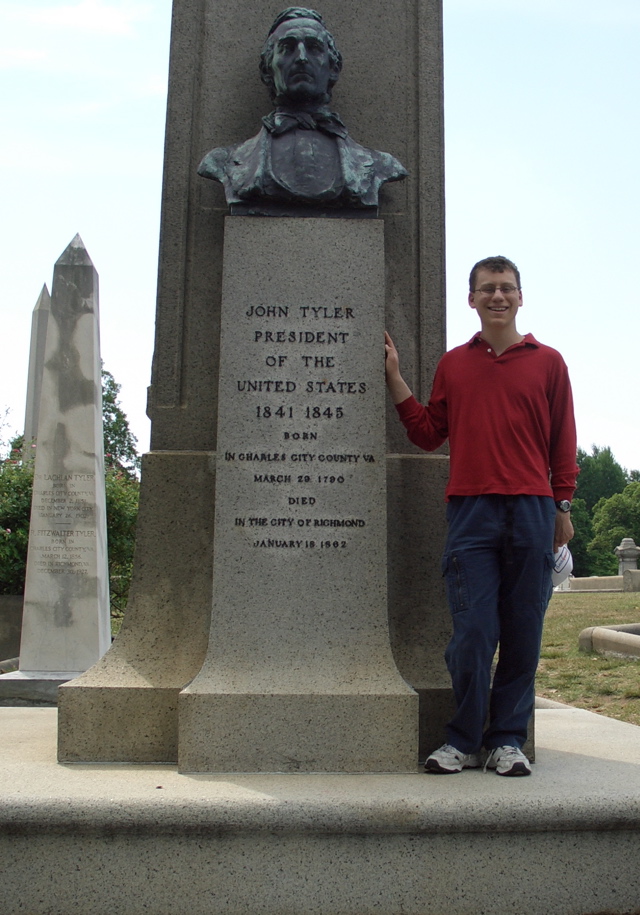 We also visited the Confederate section, where I found a monument to the Jewish Confederate dead with an oddly-transliterated version of the Sh’ma: 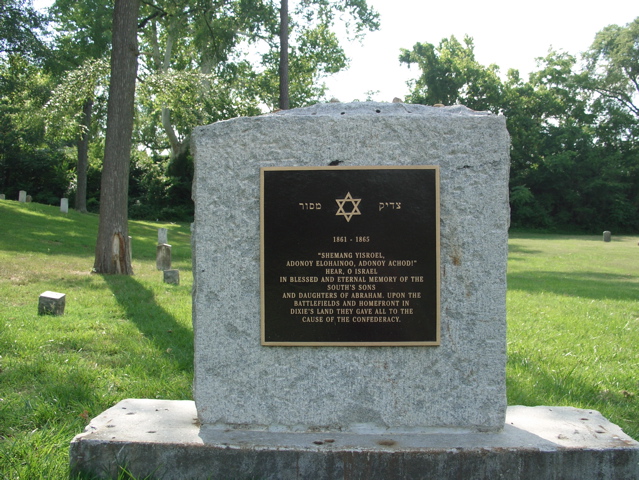 Apparently that spelling was used in the Prayer for the Confederacy, composed by the Rabbi of Congregation Beth Ahabah here in Richmond. I don’t know if it was supposed to be Yiddish or just idiosyncractic; I sure had never seen it before.

We finished our tourism for the day with a quick trip to Oregon Hill so I could show Diane and Jeff where my grandfather’s grocery store used to be, as well as some of the other sights I visited driving Shiva last year.

Then we headed back to my brother’s house where we finally saw them (they were asleep when we got in last night and we were asleep when they left for work and camp this morning), though we had exchanged phone calls during the day. Then dinner, a little geocaching, blogging, and now to bed….

Jeff and I had fun on the radio this morning; here’s the music we played, set by set:

Almost everything I played was mine; I did use the station’s copy of Acme Forgetting Service since I only have it from iTunes. And I no longer own the Balfa Brothers LP, so I had to use theirs.

I grew up in Richmond, Virginia, and had a distinct Southern accent when I first showed up at RPI — enough of one that someone gave me a hard time (probably in jest) when I showed up at WRPI and said I wanted to read the news. A week later, my Southern accent was gone, courtesy of some intensive listening to WCBS-AM’s news staff, and my radio career (I use the term loosely) began.