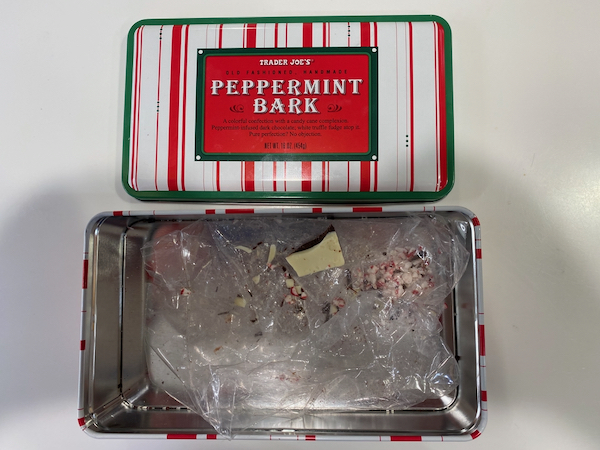 Most years, I buy two or three boxes from Trader Joe’s and possibly one box from someone else, and it’s all gone soon after New Year’s. In 2019, the purchasing pattern was the same, but the consumption pattern was different.

The first box went fairly quickly (helped, no doubt, by our son’s being with us at Thanksgiving), but then I slowed down. They say that the first bite of a dessert is the best, and I took that idea to heart – instead of having one official serving of bark (half a square, 220 calories), I’d break the square into 9 or even 16 pieces and have one or two of them a day. And I wouldn’t even have bark every day.

I finally finished the last piece today (I far preferred the Trader Joe’s over the experimental box from Sur la Table, in case you’re keeping score). I think it was better a couple of months ago, but it was still worth having – and I’ll be looking forward to its return in November.