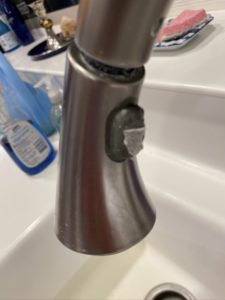 Over the weekend, the diverter in the spray head in our kitchen faucet gave up the ghost, so this morning, I took it to The Powder Room, where I’d bought it in 2008, in hopes that they could help me. They tried, but couldn’t fix it. A new one would cost $200, but they said that the manufacturer, Grohe, would send out a replacement under warranty if I called them.

Saving $200 sounded like a good idea, so I called as soon as I got home. After navigating the menu tree (only three keypresses required), I was greeted with the dreaded “wait times are longer than normal, please hold” recording. The hold music wasn’t too bad, and the announcements weren’t too annoying, but I was happy when the music stopped after about 4 minutes. And I was unhappy 2 seconds later when the recording restarted from the beginning.

An hour later, I had to hang up the phone to go to the dentist for a cleaning. And an examination. And the news that I had to have a filling redone (for free!), plus another filling and a new crown. I made the appointments and drove home to get back on the phone with Grohe.

An hour and another dozen repetitions of the recording later, an agent answered, and five minutes later, a new spray head was on its way to me. Well, not really – it’s out of stock but they expect to ship it around the 27th of this month.