Our hotel stay was reasonably comfortable, but I have to say that I miss the breakfast buffet of old (especially the waffle-maker). A grab and go bag is just not the same thing – fortunately, we’d brought cereal and fruit with us, so we had a decent breakfast anyway.

We took the obvious route from Bakersfield; I had meant to stop at the truck stop just before the descent on the Grapevine, but I missed it and we had to go all the way to Castaic before finding more civilization. Yelp pointed us to Sam’s BBQ and Grill – unfortunately, the sign on the outside of the building read “Castaic Food and Deli” and we drove past it several times! It’s a small takeout restaurant inside a truck stop, with Mexican food and BBQ; Diane and I both had the Tri-tip sandwich, which was pretty good and quite filling!

There was a crash on the 210 (I’m in Southern California, so I’m following local custom and using the definite article) that tied up traffic for a few minutes. When we got up to the scene, four lanes had to funnel down to one to get around the wreck; I was impressed by the courtesy of the drivers making the merge go fairly smoothly and fairly. It’s not that way at home!

Dinner tonight was another first-in-a-long-time – we ate with another couple, friends from Shir Hadash who moved down here a few years ago. We ate at Koutouki Greek Estiatorio in Palm Desert, sitting outside…without masks! We were all fully vaccinated, of course, and it was not possible to wear masks while eating – but it still felt very strange, almost naughty!

After dinner, Diane and I had dessert at Lappert’s (not worth the caloric cost, I’m afraid), which let us enjoy the last bit of sunset. 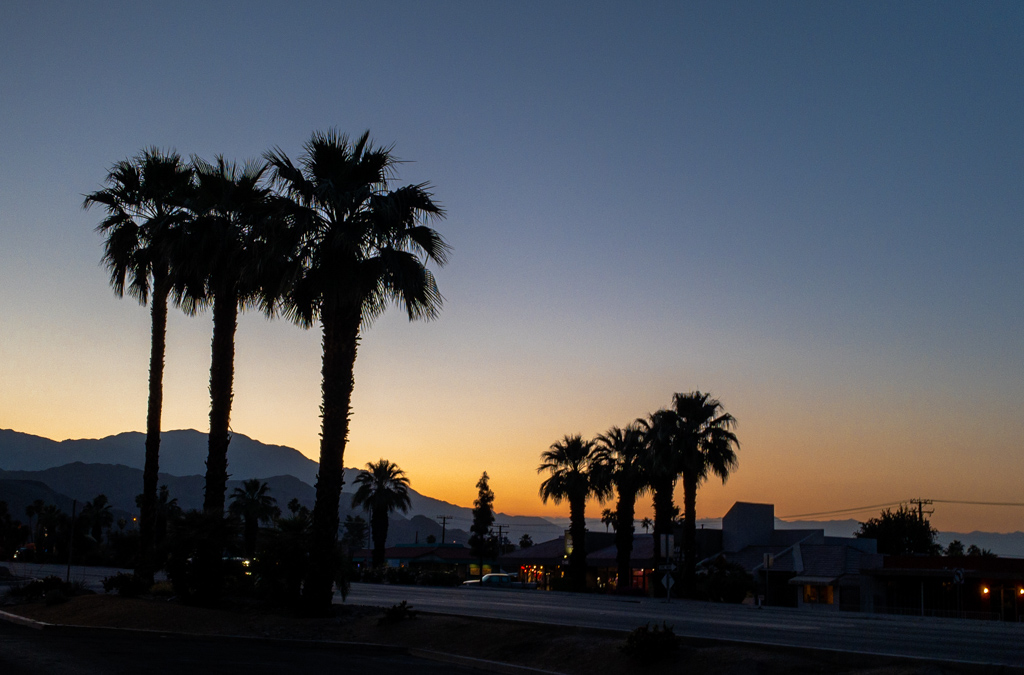