This morning, I awoke to the happy news that I’d been victorious in yesterday’s Learned League match, despite my best efforts to the contrary.

I knew three of the questions immediately (answers at the end of this post):

Q3: The “city” of Nuuk (technically an illoqarfik and formerly known as Godthåb) is the most populous city on what island?

Q4: Belfast-born physicist and mathematician William Thomson, who is widely credited with clarifying the thermodynamic concept of absolute zero and determining its correct value, was elevated to the peerage in 1892, becoming 1st Baron what?

The other three were less obvious to me.

Q1: H.R.3684, a $1 trillion bill that was passed by the 117th Congress after a bipartisan vote in the US House of Representatives on November 5, 2021, is officially known as the [REDACTED] Investment and Jobs Act. What word has been redacted?

My thought process here was straightforward: that’s the infrastructure bill; it’s part of the recovery effort, so, of course, it’s going to be named the American Investment and Jobs Act, to match the American Rescue Plan Act.

Q2: One of 20th-century author Mohammad-Ali Jamalzadeh’s first successful short stories””a genre in which he is regarded as a master””was titled “Farsi shakar ast”, which translates to English as “_____ is Sugar” (fill in the blank).

I had no idea on this one at first; I knew “Farsi” was the language spoken in Iran (Persia), but that seemed too obvious. Then I noticed “regarded as a master” and used that as a springboard to my answer: Chess.

The last question puzzled me at first until the pattern jumped out at me:

I was surprised that my opponent missed that one, since he lives in England. I’ve never seen the show in question, but I’d seen it mentioned online, and that was enough to give me the answer and the match. I’ve been near the bottom of my Rundle all season, flirting with the relegation line, so every victory is crucial. Thanks, Peppa Pig (and thanks to ChrisTheDude at English Wikipedia for the photo)! 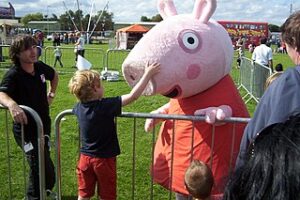