I’ve got two Macs which are “my main computer” – the Mac mini in the office and the MacBook Air that mostly lives in the kitchen except when it goes on vacation with us. My plan was to have the mini be the real main computer; the laptop would only have subsets of what was on the mini – some photos, some music, some programs, and of course, whatever photos I took on a trip until I could get them home to the real computer. I didn’t even get a Backblaze subscription for the laptop because it wasn’t supposed to have anything I cared about.

It was a great plan, but it didn’t work. I do most of my mail and web browsing on the laptop because it’s in the kitchen – and that means I download a lot of things to that system. And once in a while, I find myself writing a bit of code there. And of course, when we travel, photos go to the laptop.

So this afternoon, I decided to make sure that everything on the laptop was, indeed, on the mini.

It wasn’t. And still isn’t, even after spending hours on the task, but I’m closer.

I was surprised by how many things were almost duplicated on the two machines – especially source code for various projects. I almost always create a Git repository for anything that’s going to live more than an afternoon, but I don’t put it on Github unless I plan to share it. Which sometimes meant I’d copy the repository from the mini to the laptop, work on it there, and never copy the changes back to the mini – and then sometimes I’d make a different set of changes there. So I spent a good bit of the afternoon resolving the differences – and making sure the code was up on Github for the future. 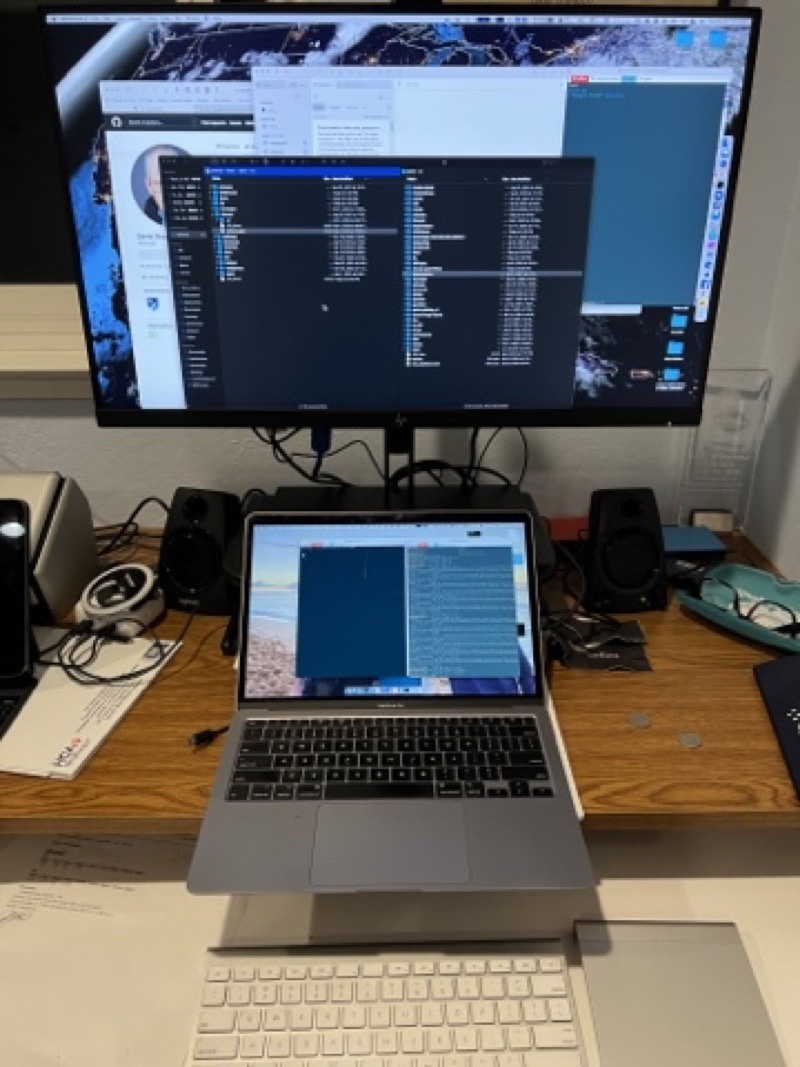 The strangest part of the day, though, was the way I did the work. I brought the laptop into the office and set it up under the monitor for the mini; then I used Forklift on the mini to get a view of both machines’ disks at once.

As a wise person (not me!) once said, “there is no problem in Computer Science that can’t be solved by adding another level of indirection.”