American Airlines recently redesigned their web site, making it prettier and more in keeping with current design trends. It got less usable, at least in some areas, but it’s prettier.

I wanted to make sure that we’d gotten credit for all of our recent flying, so I went to the account page and saw that “recent activity” wasn’t a simple list any more. Instead, it’s a bunch of blocks, like so:

I saw blocks for “SFO-LHR” and “LHR-SFO”, but not for the LHR-OPO and MAD-LHR legs, so I submitted “missing flight” requests for them. But when I looked more closely, I noticed that I’d gotten significantly more mileage for the eastbound flight than the westbound. I clicked on the box for SFO-LHR and saw that it included an entry for LHR-OPO, too. 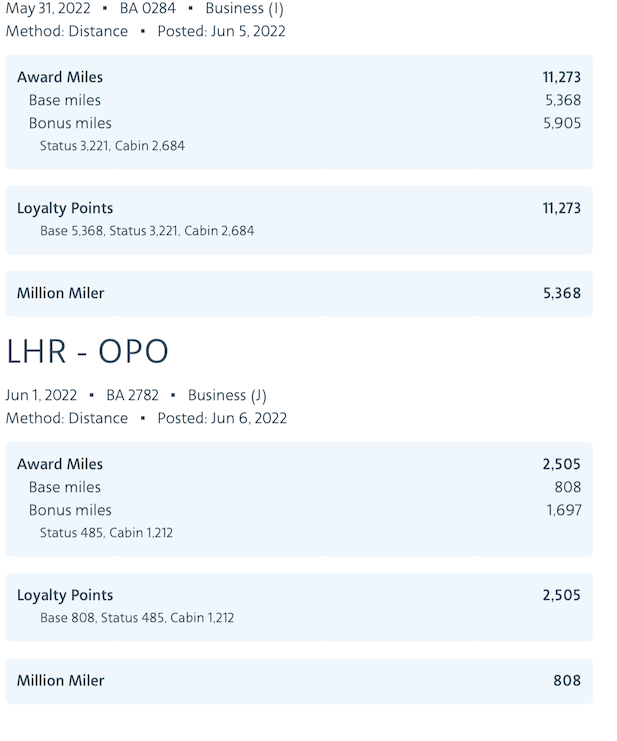 Why the box couldn’t say “SFO-LHR-OPO” is beyond me.

In contrast, the LHR-SFO box contained only that one flight, so I still need credit for Madrid to London. I looked closely at the boarding passes and discovered that the Madrid to London flight was on a different ticket than the other three legs, probably because Iberia operated that flight even though BA issued the ticket.