We got up at a much more civilized hour this morning and discovered that the weather had changed overnight. It was significantly cooler, much less smoky, and raining.

We packed our bags, wandered around the hotel for a while, and eventually boarded the bus for the short trip to the Denali Park Railroad Depot. We had time enough for a short visit to the Visitor Center, where we finally saw a moose. 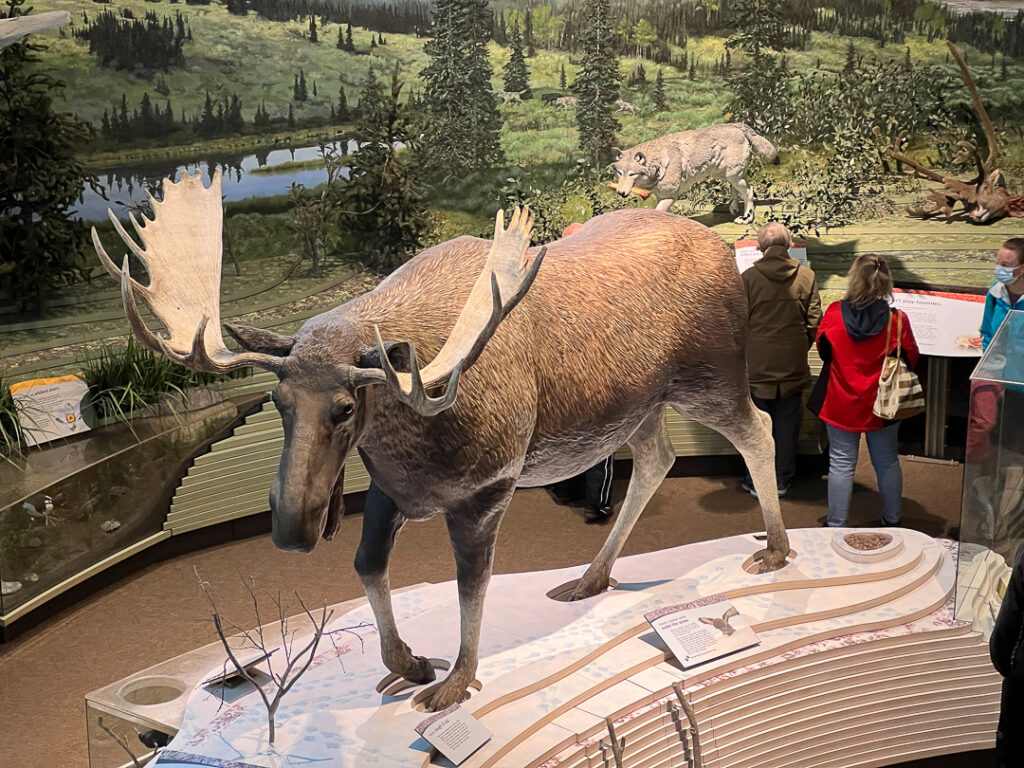 We made a quick trip to the Park Shop and returned to the depot with plenty of time to make the train – especially since it was running a little late. I suspect we would have had enough time to walk the Spruce Forest Trail at the Visitor Center, but neither of us wanted to take the chance – next time for sure! 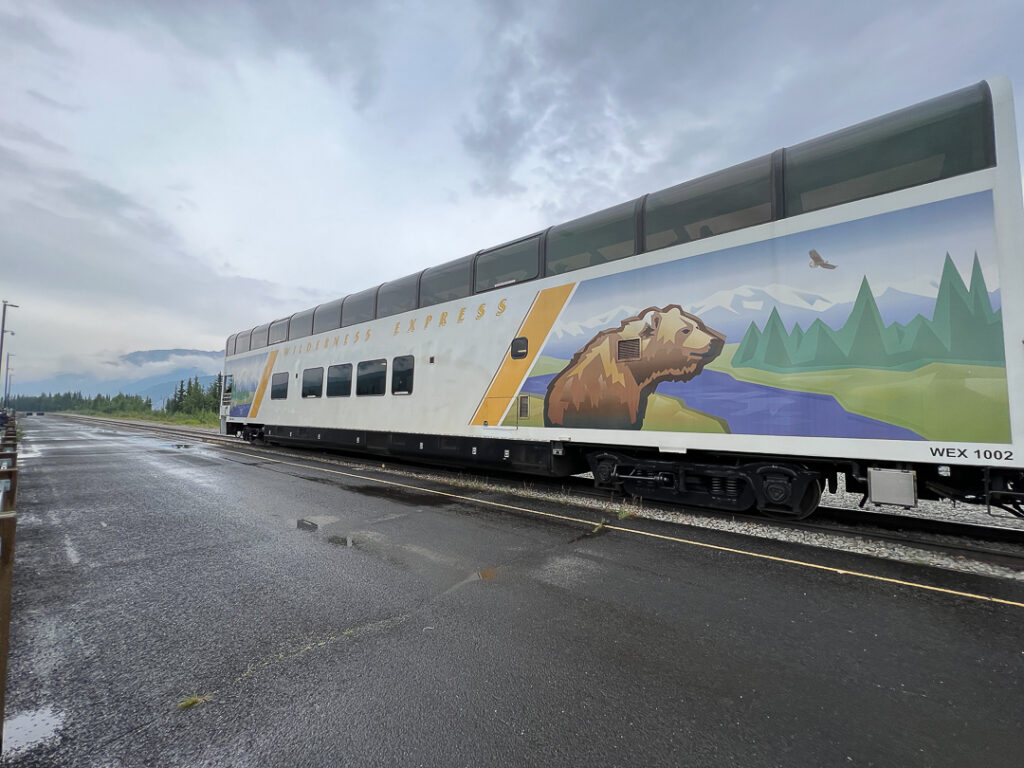 This segment of the trip was more photogenic than the stretch from Fairbanks to Denali; some of that might have been due to the misty, rainy weather. 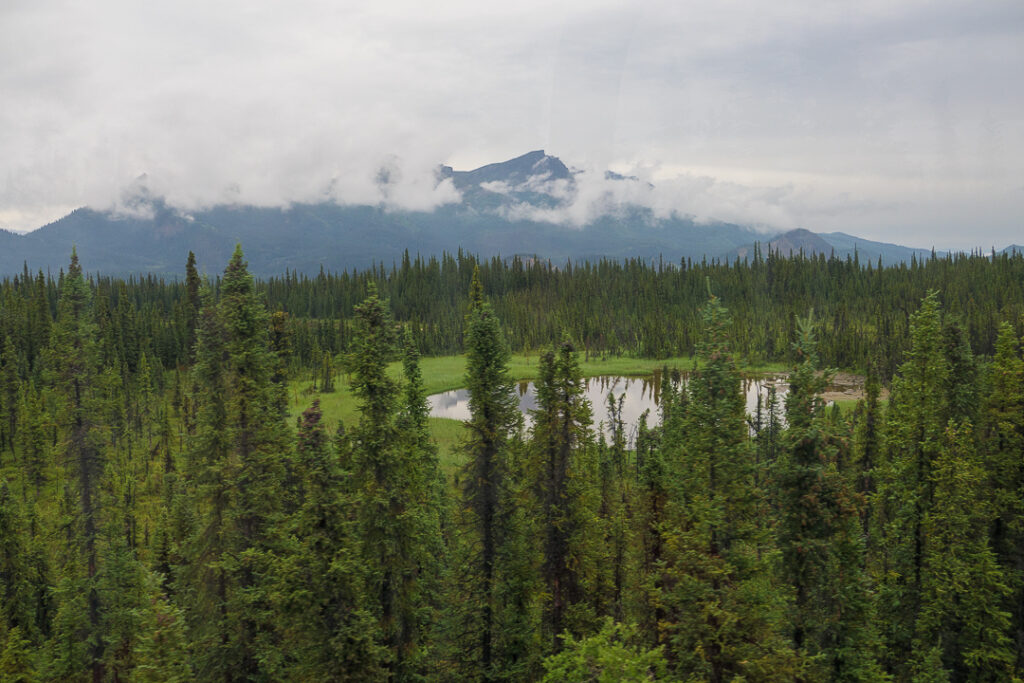 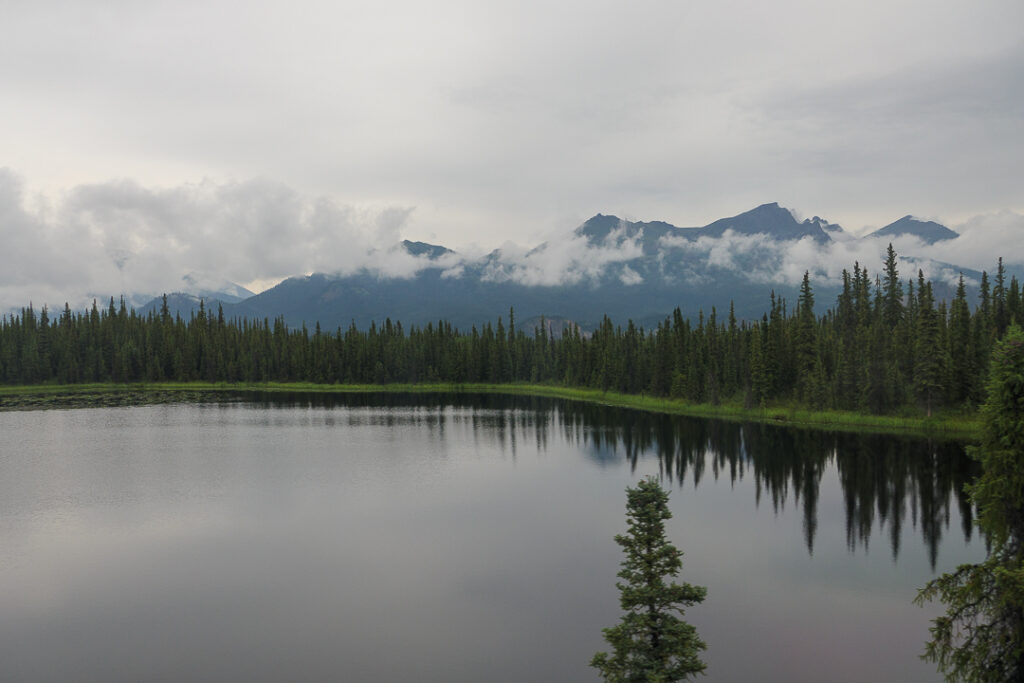 About 15 minutes after leaving the depot, we passed by Denali Park Village where we’d spent the last two nights. We could even see the Thai food truck across the street that had saved the day for lunch yesterday! 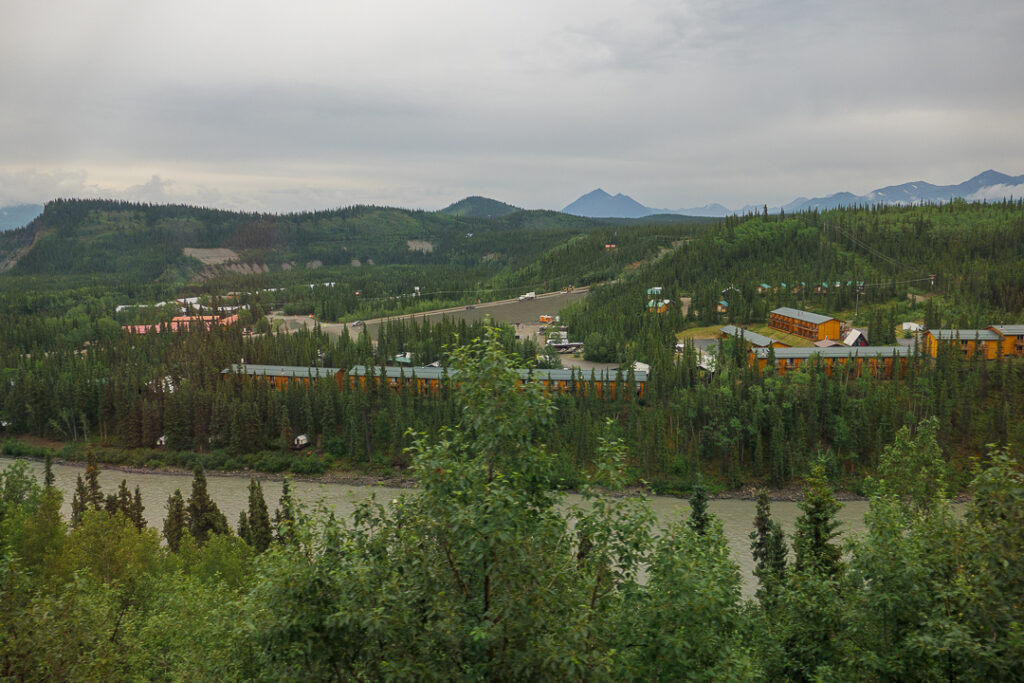 We paralleled the Nenana River for most of the trip. 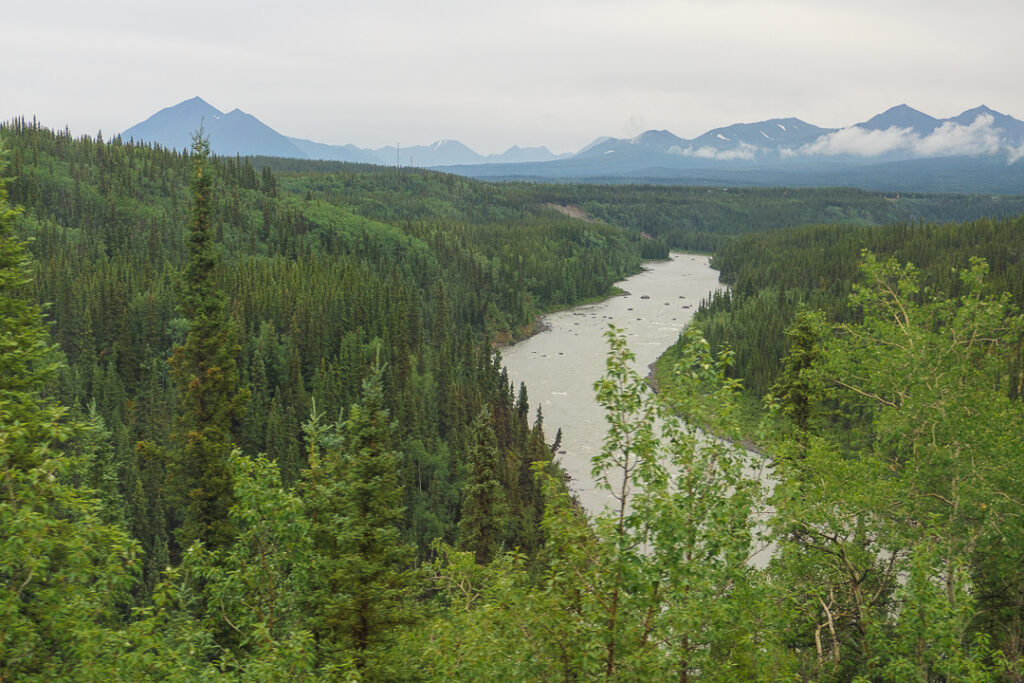 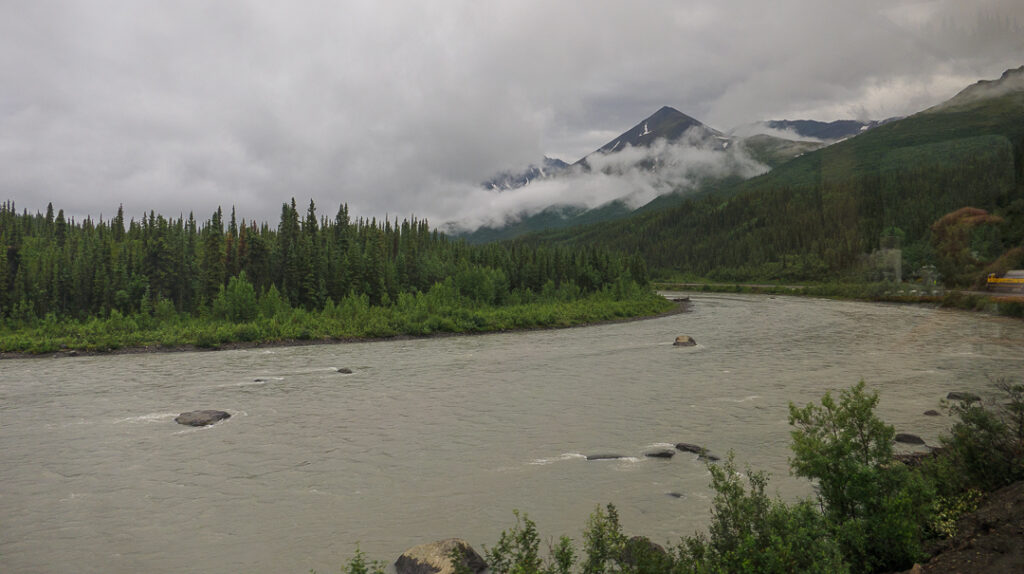 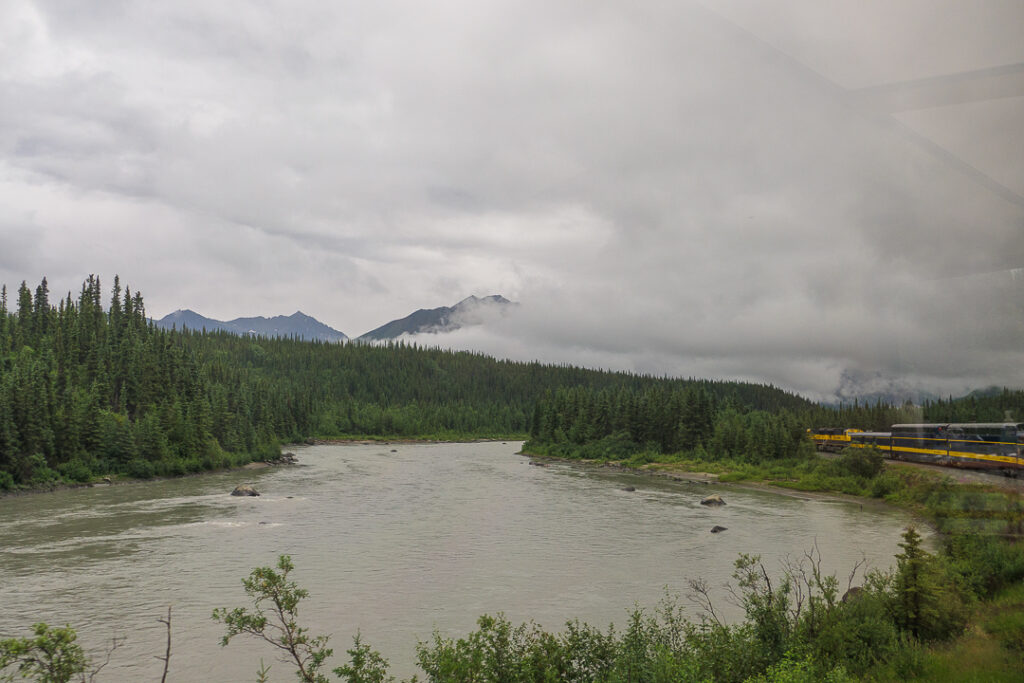 You can see the difference in water color where Carlo Creek (snow melt) joins the Nenana (glacier-fed). 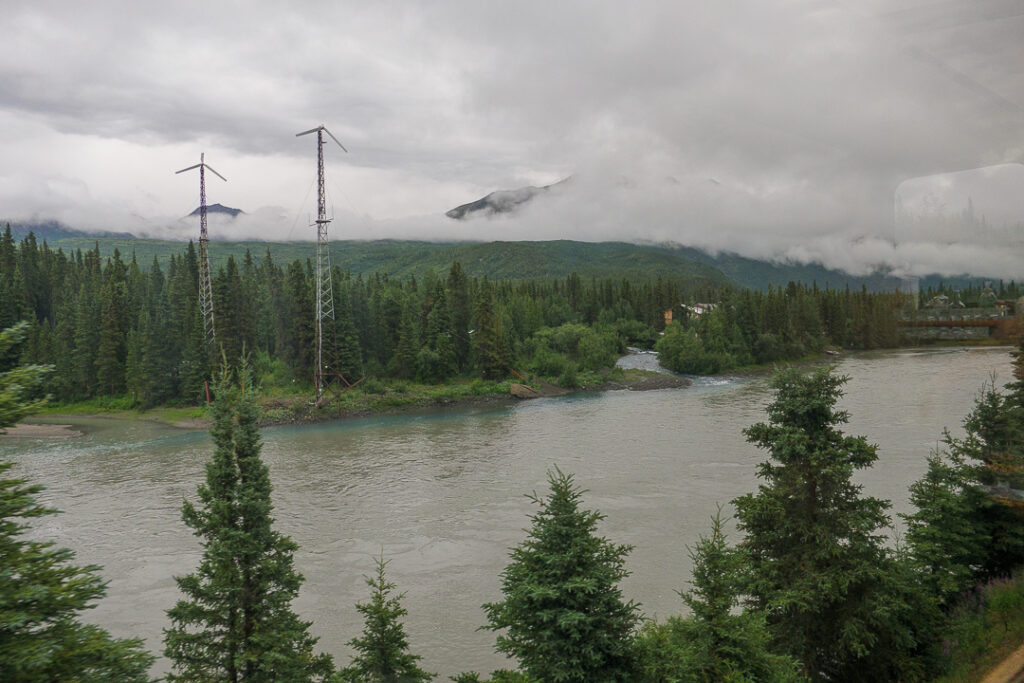 Panorama Mountain isn’t as large as Denali, but it’s still a big mountain; we could only see a little of it. 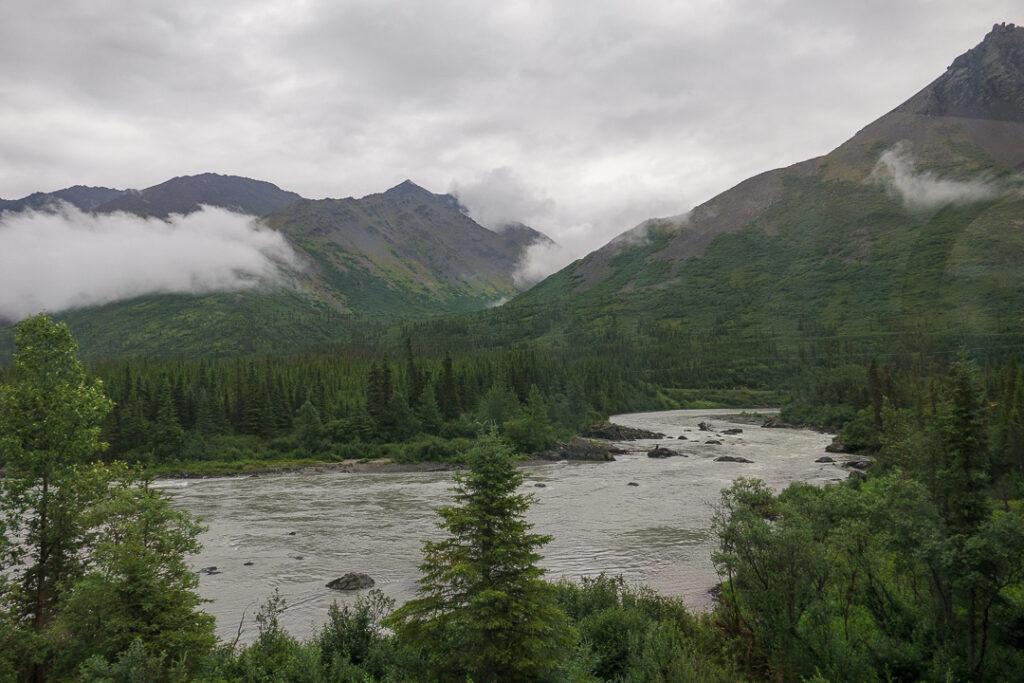 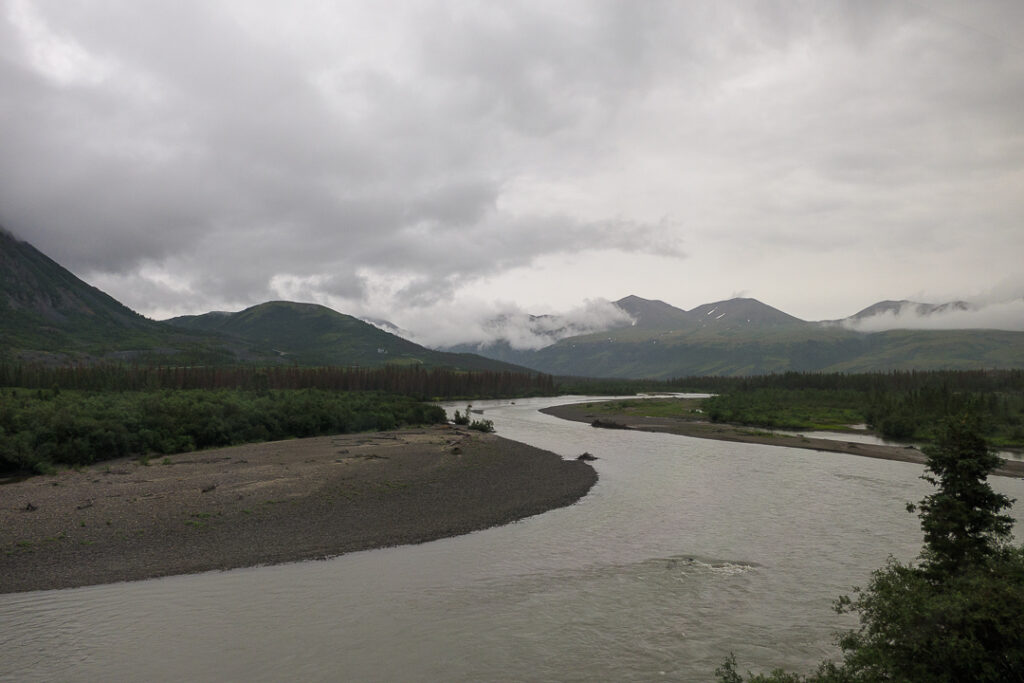 The Northbound and Southbound trains met near Broad Pass and swapped conductors and supplies.

When the trains started moving again, Deana (our guide and rail host) told us to give the passengers on the other train the moose salute, and we did. They didn’t return the gesture. 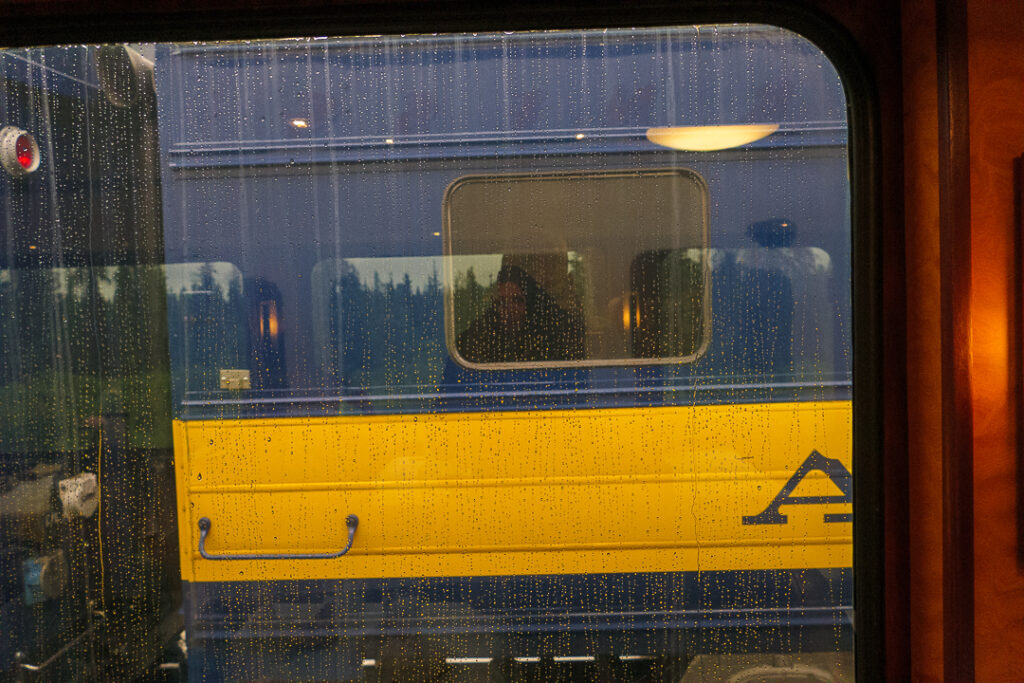 The rain didn’t bother the ducks in the river. 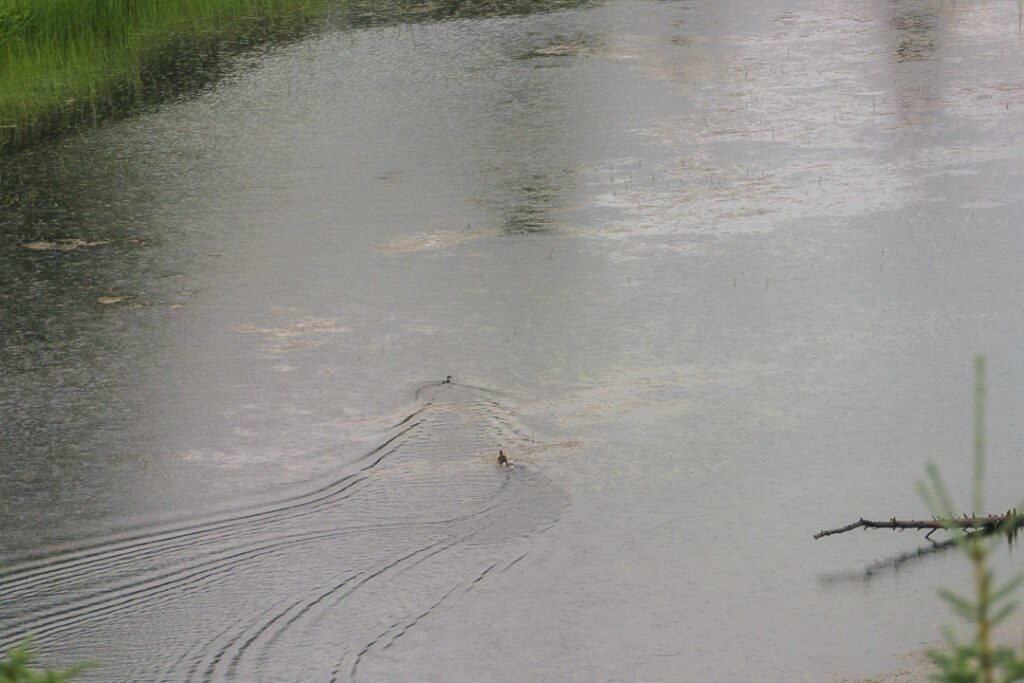 The telegraph lines which once connected the far-flung outposts of Alaska were abandoned decades ago – they are now officially protected historical artifacts. 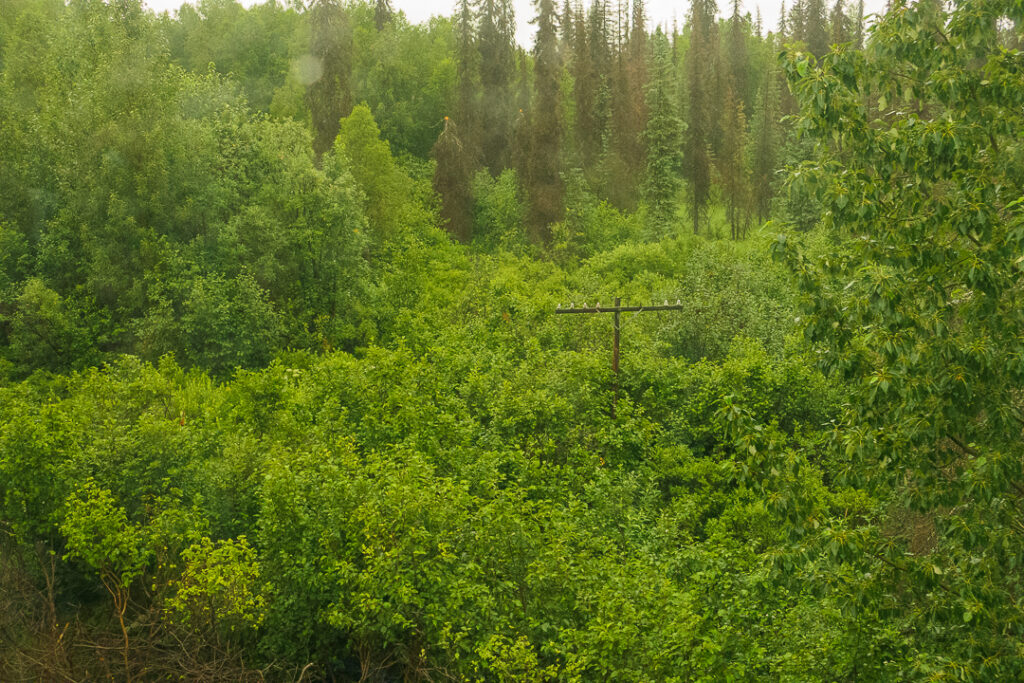 The bridge over Hurricane Gulch gave us some dramatic views. 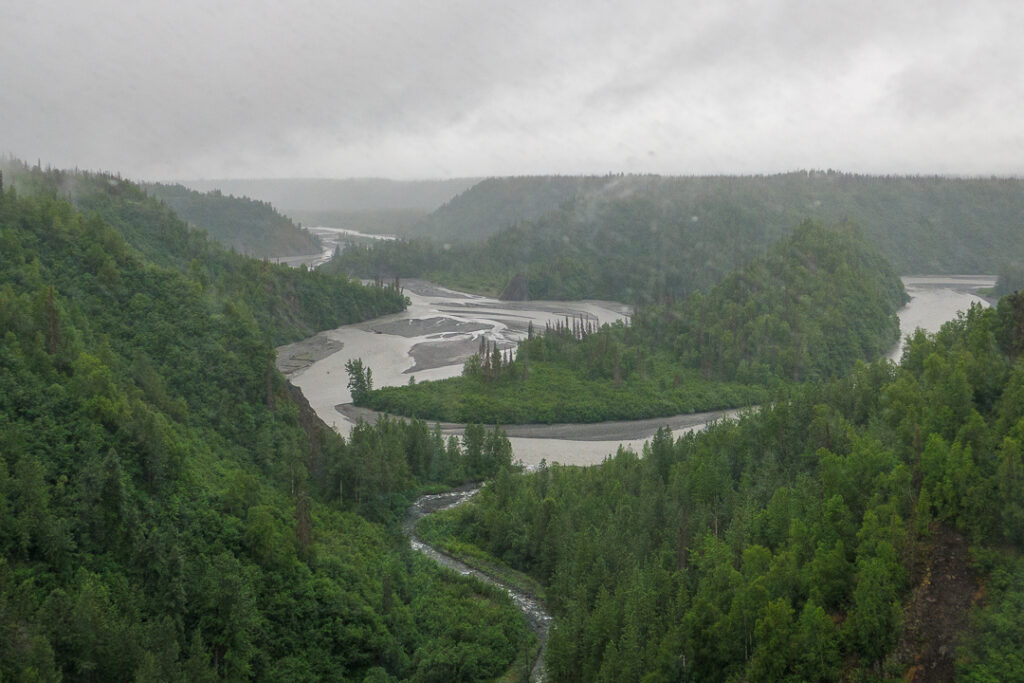 Once we passed Hurricane Gulch, we entered the “flag stop” area; there are no roads here (the Parks Highway is about ten miles away), so the railroad is the lifeline to the outside world. Residents flag down trains and they stop – it’s almost like using Lyft!

The houses here are off the grid and the residents have to be able to handle whatever Mother Nature throws at them. 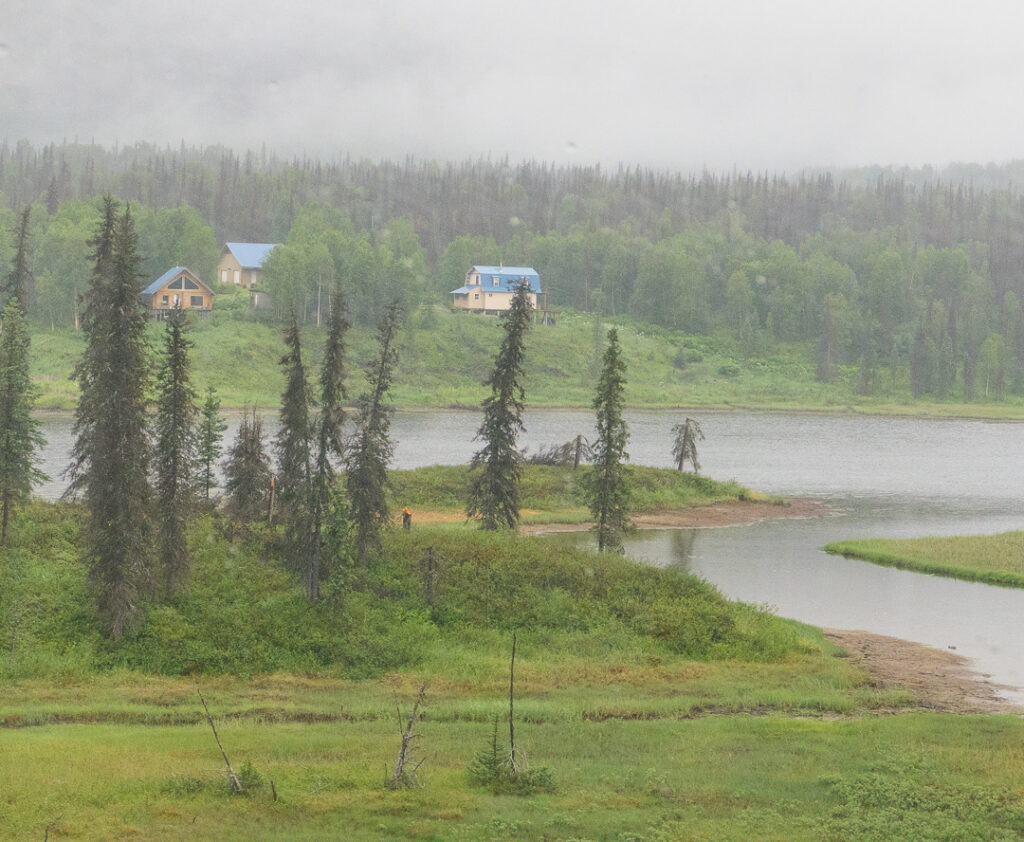 The line is mostly single-tracked, but there are sidings to allow two trains to pass one another; the conductor of one of the trains has to get off the train and manually throw the switch to change tracks. Our conductor had to do that when we passed a train pulling cars for another cruise line. 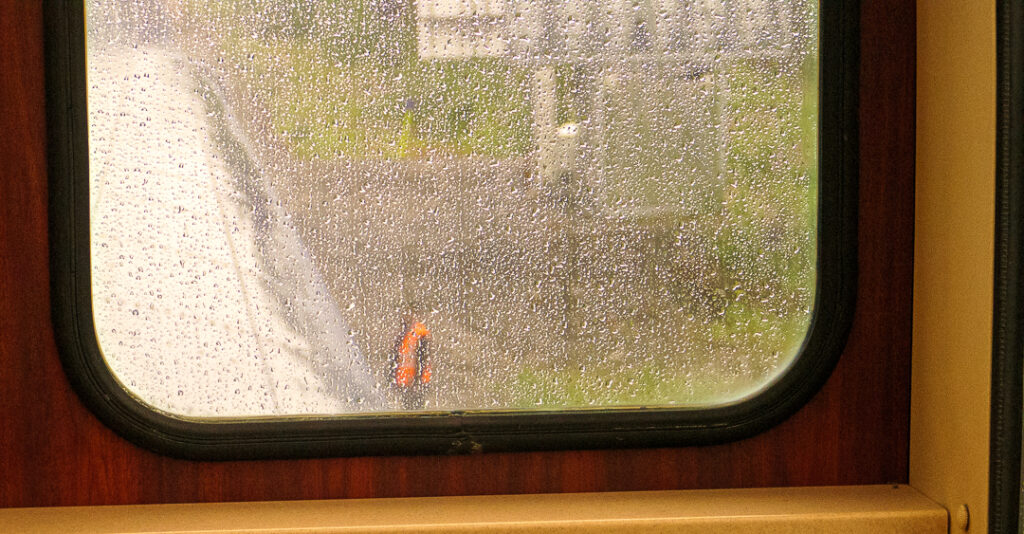 There was more beautiful scenery along the Indian River; on a different day, we might have seen Denali as we crossed the river. 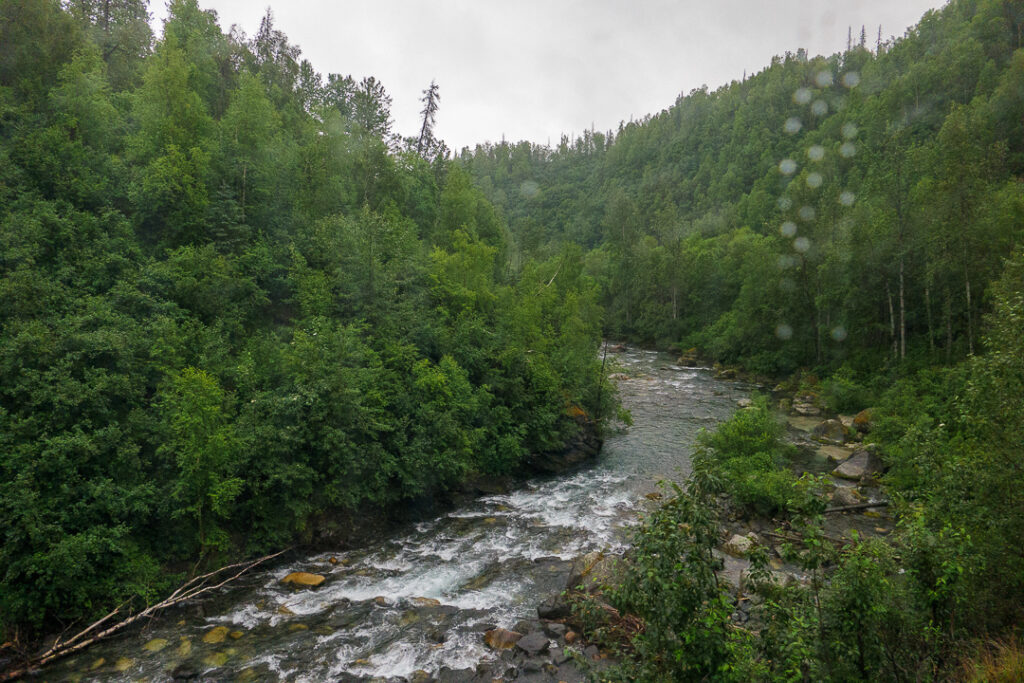 Gold Creek was named by prospectors early in the 20th Century. I don’t know if they found gold, but now they offer R&R. 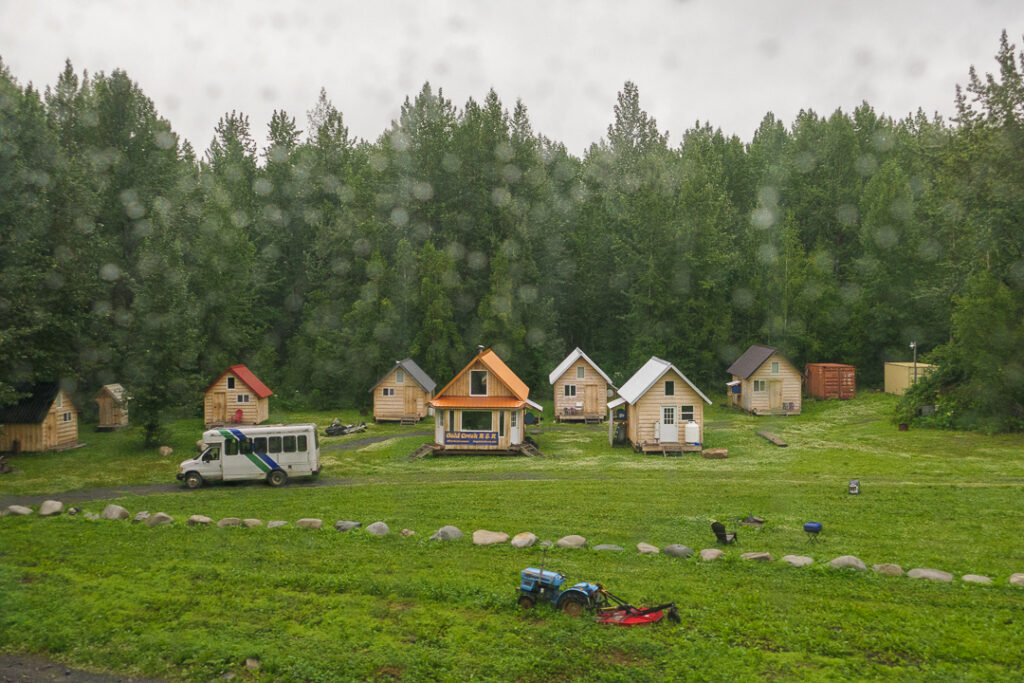 The trackside vegetation had changed; instead of spruce trees and grass, we were seeing meadows of Queen Anne’s lace and fireweed, with occasional ferns. 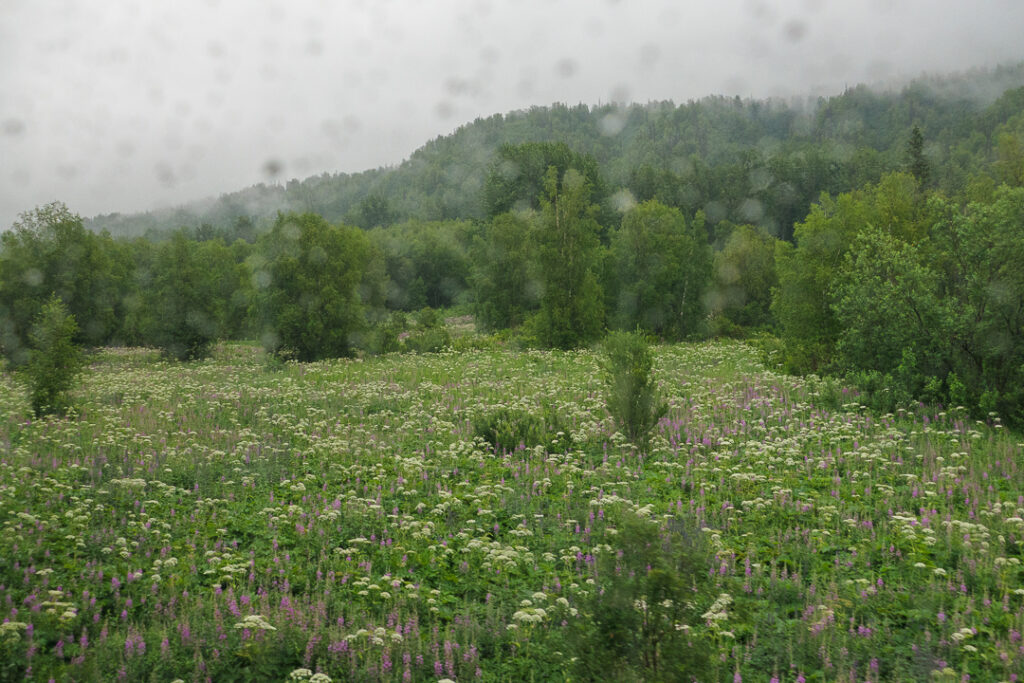 The conductor stopped by our car for an expresso and chatted with us a bit. 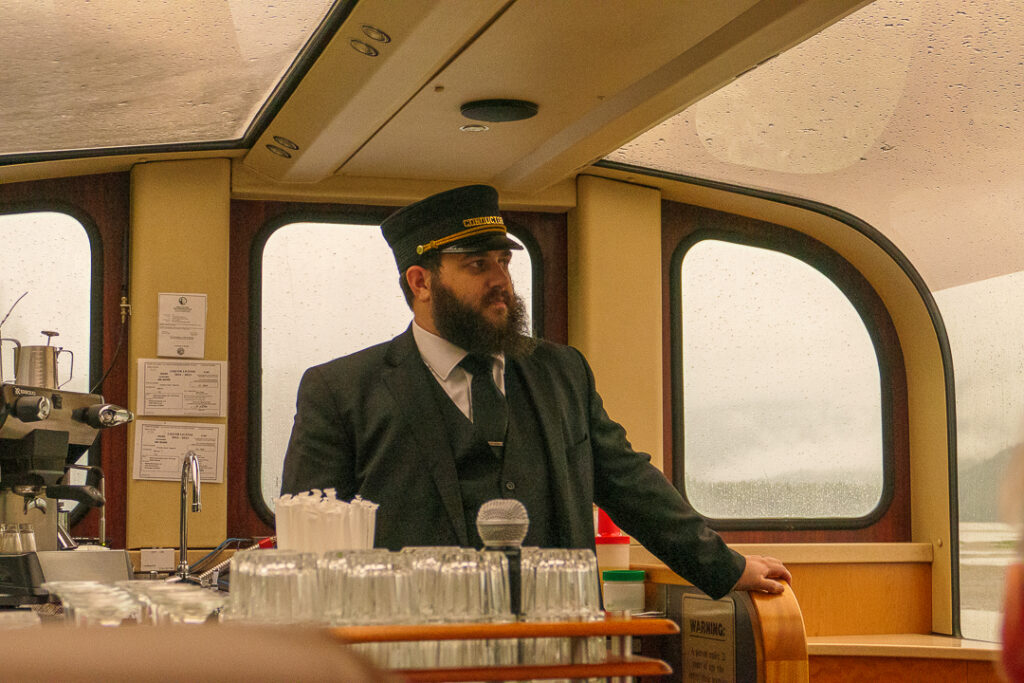 We disembarked at Talkeetna about 4 hours after we boarded; buses were waiting to take us to our home for the evening, the Talkeetna Alaska Lodge. The view out our window is in the direction of Denali, but the weather forecast says that we aren’t likely to see it. There are signs saying that moose have been spotted on the property, but I’m not optimistic about seeing them, either. 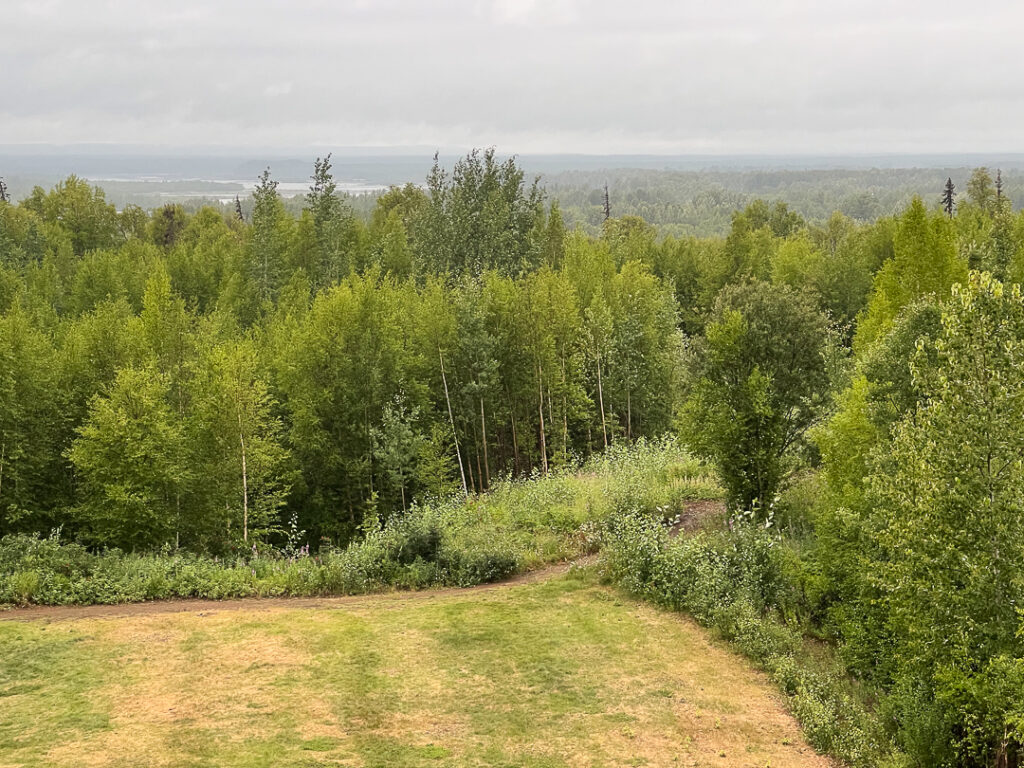