The sky was bright this morning at breakfast time, even though it was only 5am. We had to get up very early to take the Denali Tundra Wilderness Tour – we were on Tour Bus 8 and had to be on the bus by 6:45am (I’m curious when Tour Bus 1 left and happy we weren’t on it).

We were on the Park Road by 7:20. Our driver/guide, Cassie, told us about the landscape we were passing through, beginning with the taiga forest. 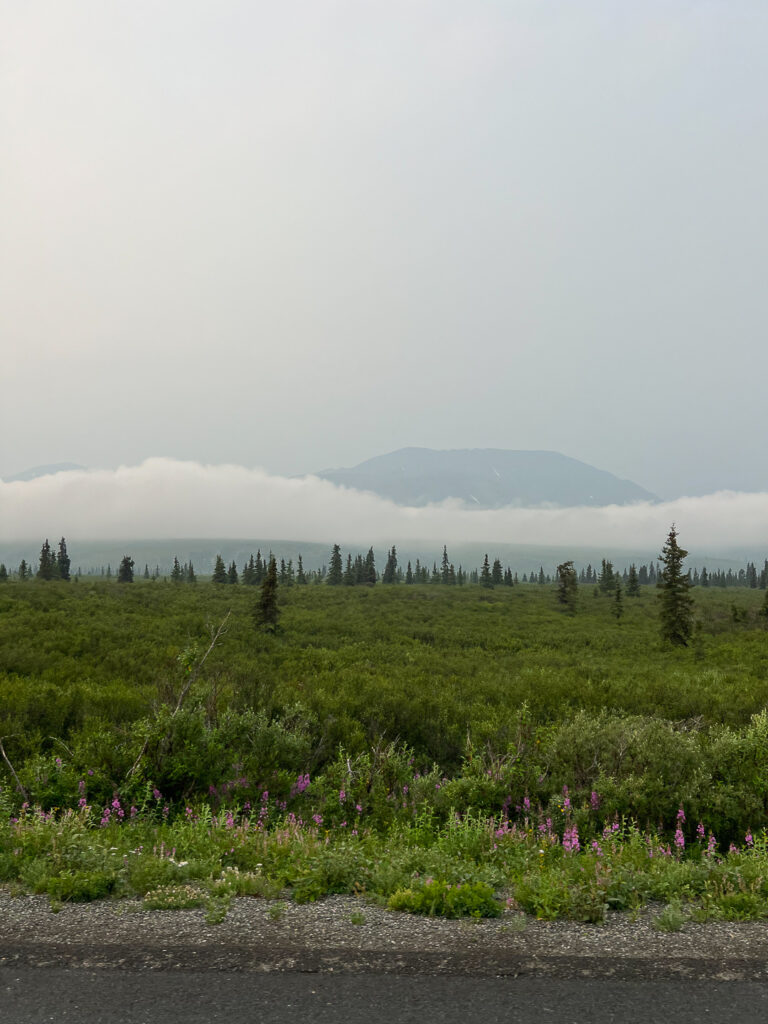 She told us to keep our eyes open for interesting animals and to yell “Stop!” If we found one.

We reached the Sanctuary River bridge without any interesting animals being spotted. 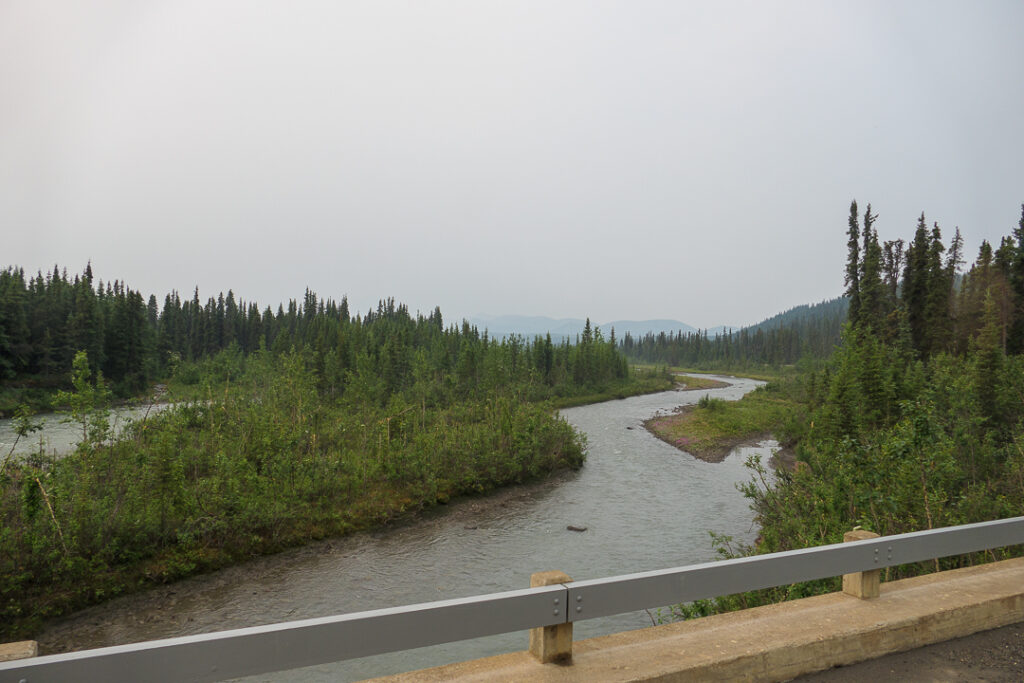 At Mile 30 of the Park Road, we turned off for the one and only rest stop on the route, the Teklanika Rest Stop overlooking the Teklanika River. We’d been in the park for 90 minutes and were still interesting-animal-free. 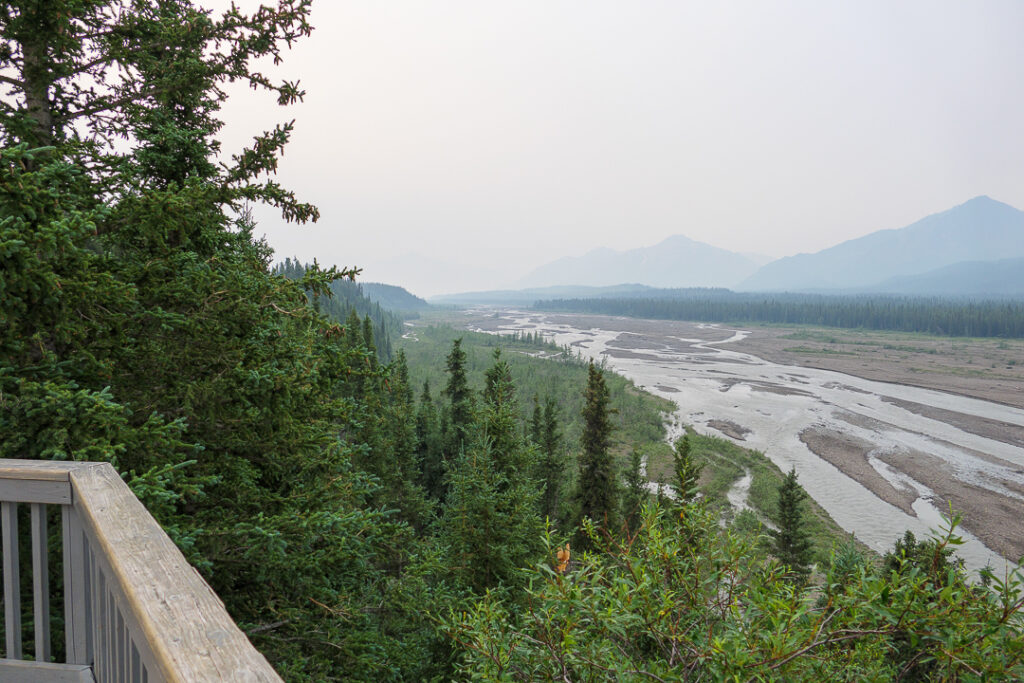 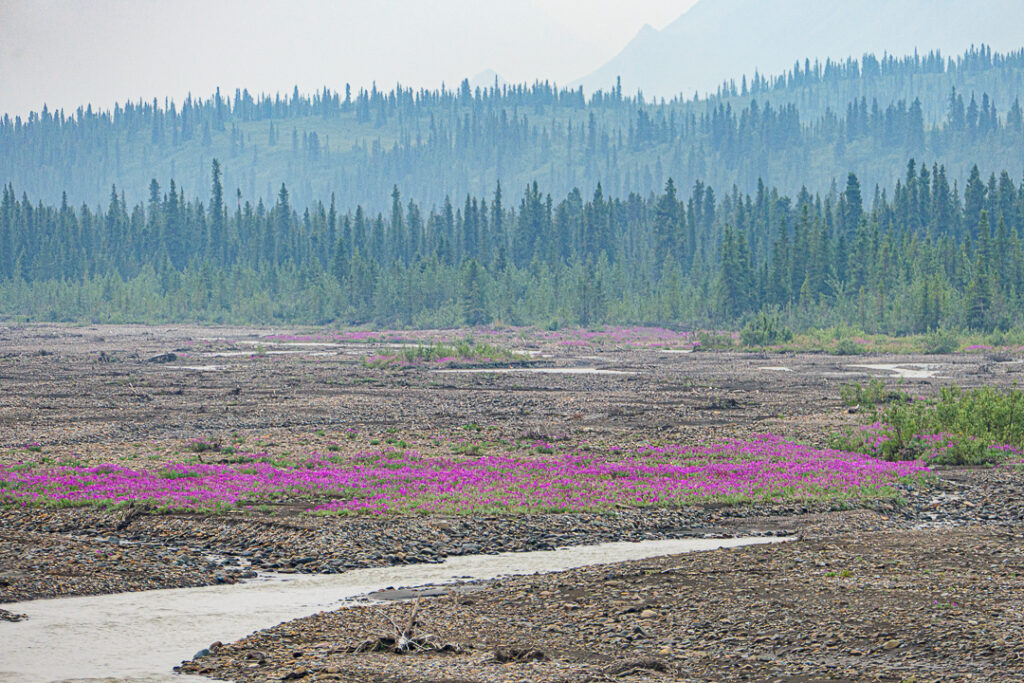 A few minutes after leaving the rest stop, we had our first sighting of the day, a Dall Sheep far off in the distance, a few hundred feet below a small ice patch. Cassie said we could consider the trip a success! 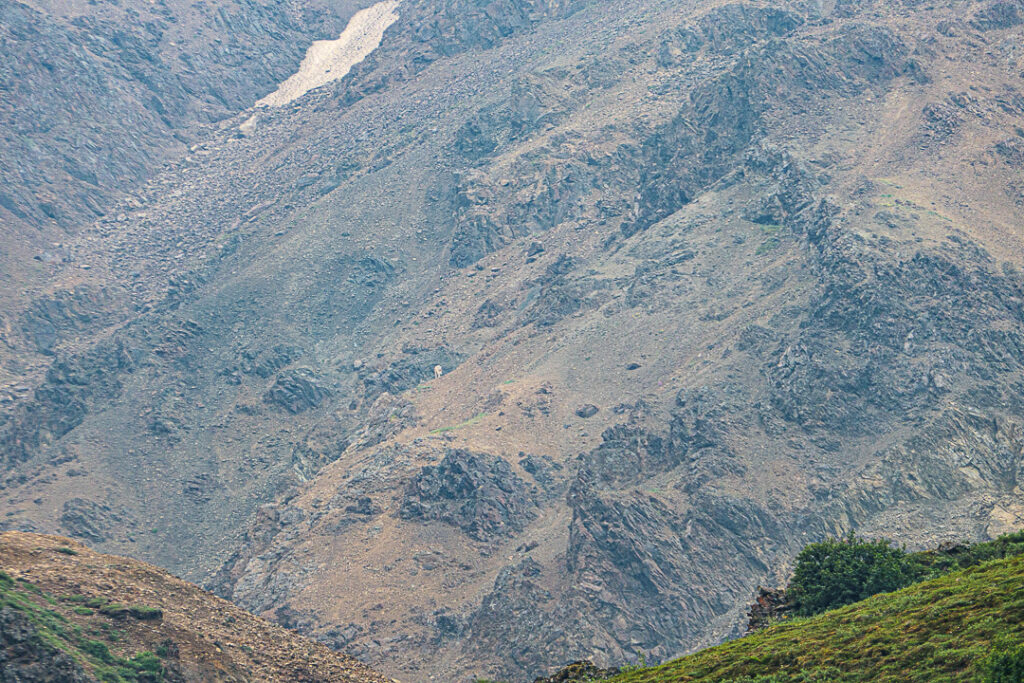 Ten minutes later, our bus came upon a couple of hikers on one side of the road and a grizzly bear on the other! Cassie pulled the bus between the bear and the hikers and told them to get on the bus. They did. 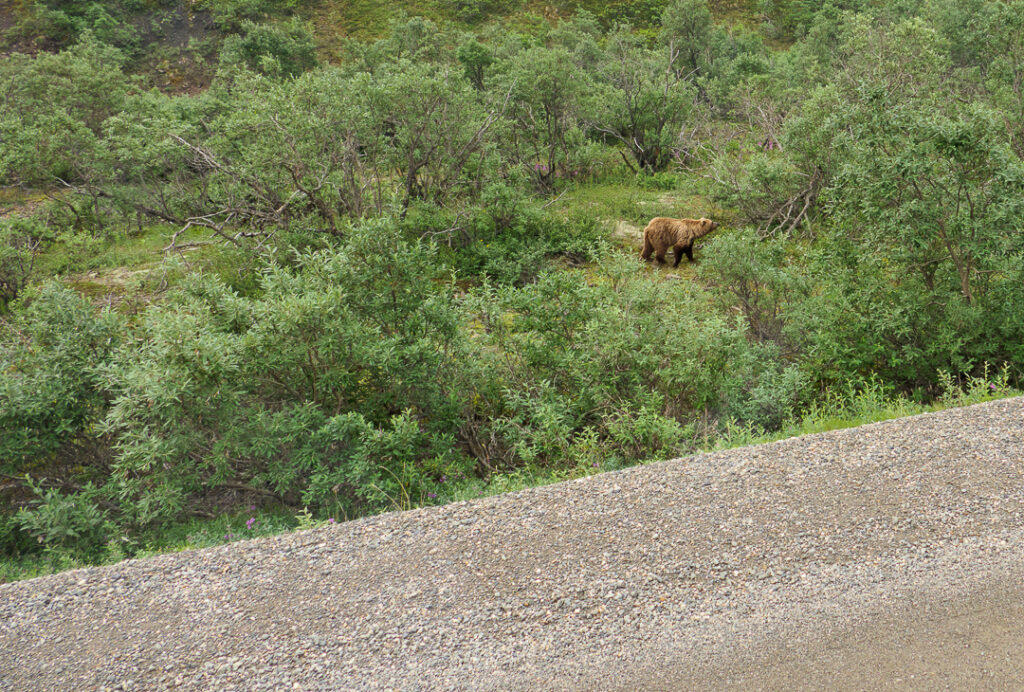 The bear lost interest and took off on the best trail in the Park – the Park Road. 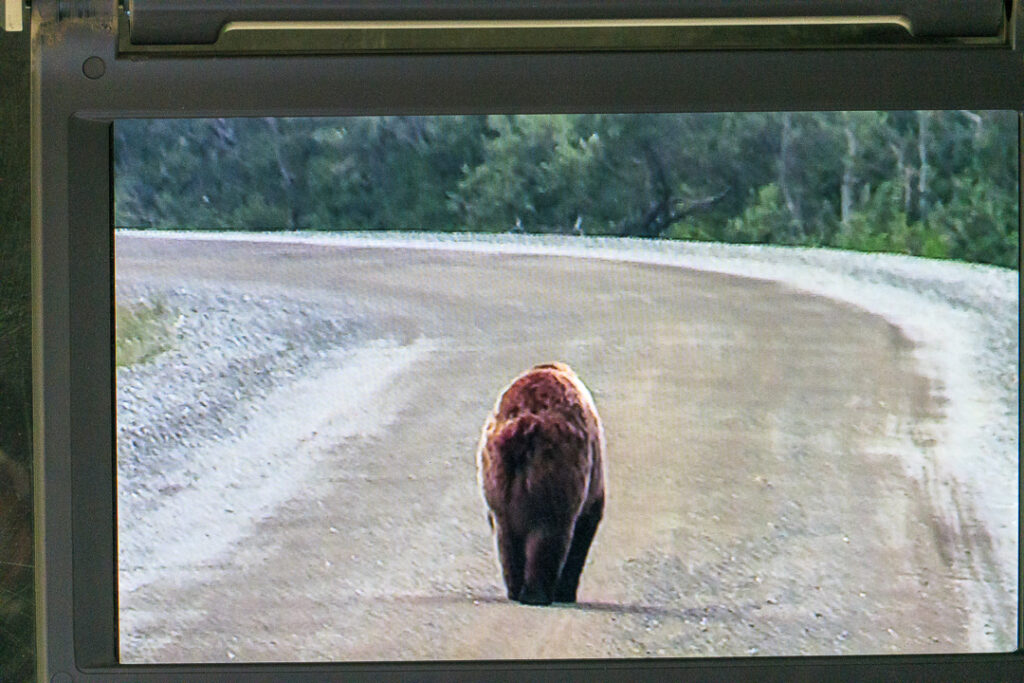 The hikers departed, too – we saw them a couple of hours later on our way out of the park, so I guess they survived.

The grizzly bear wasn’t ready to leave the area entirely – we saw him again just a couple of minutes later and stuck around until he was no longer visible. 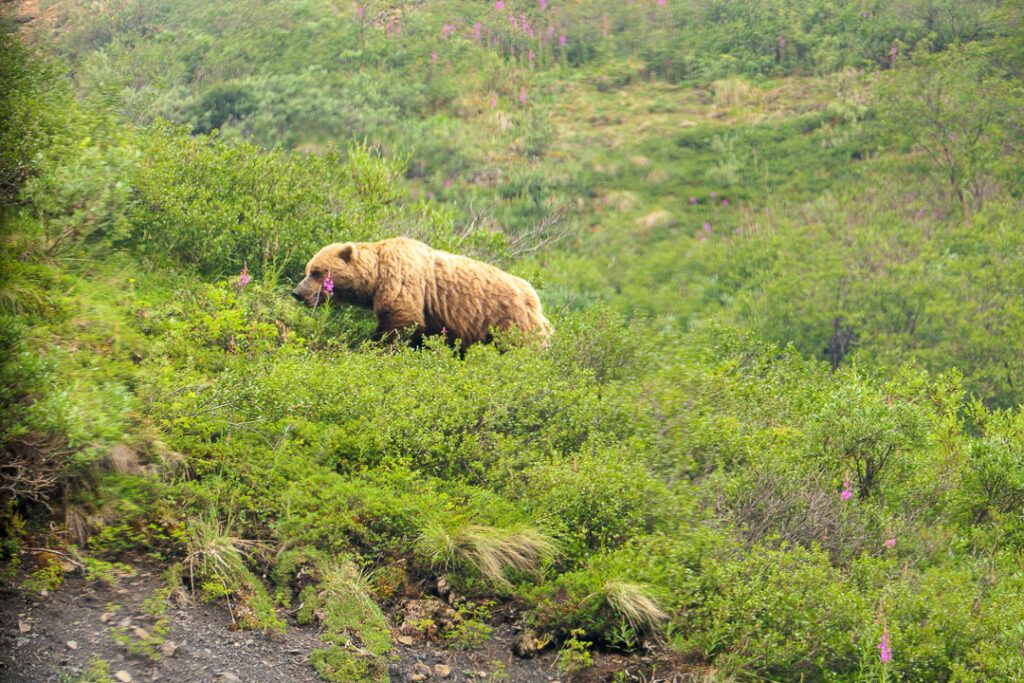 Our next encounter was with another Dall sheep, this one much closer to the road. 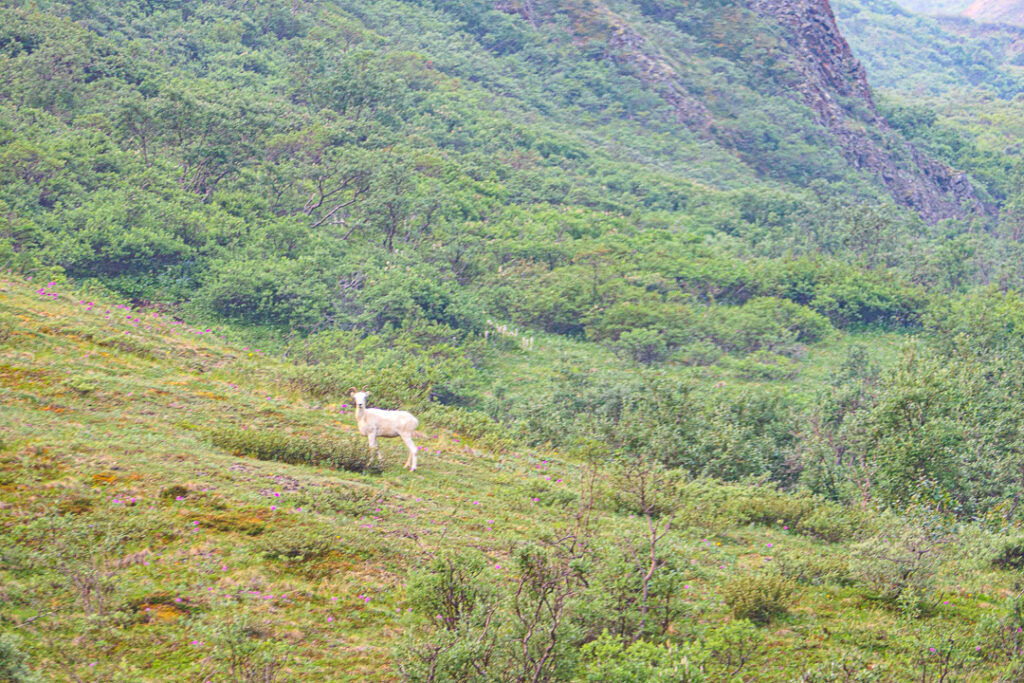 After a while, she got tired of showing off and bounded away into the vastness of Denali Park. 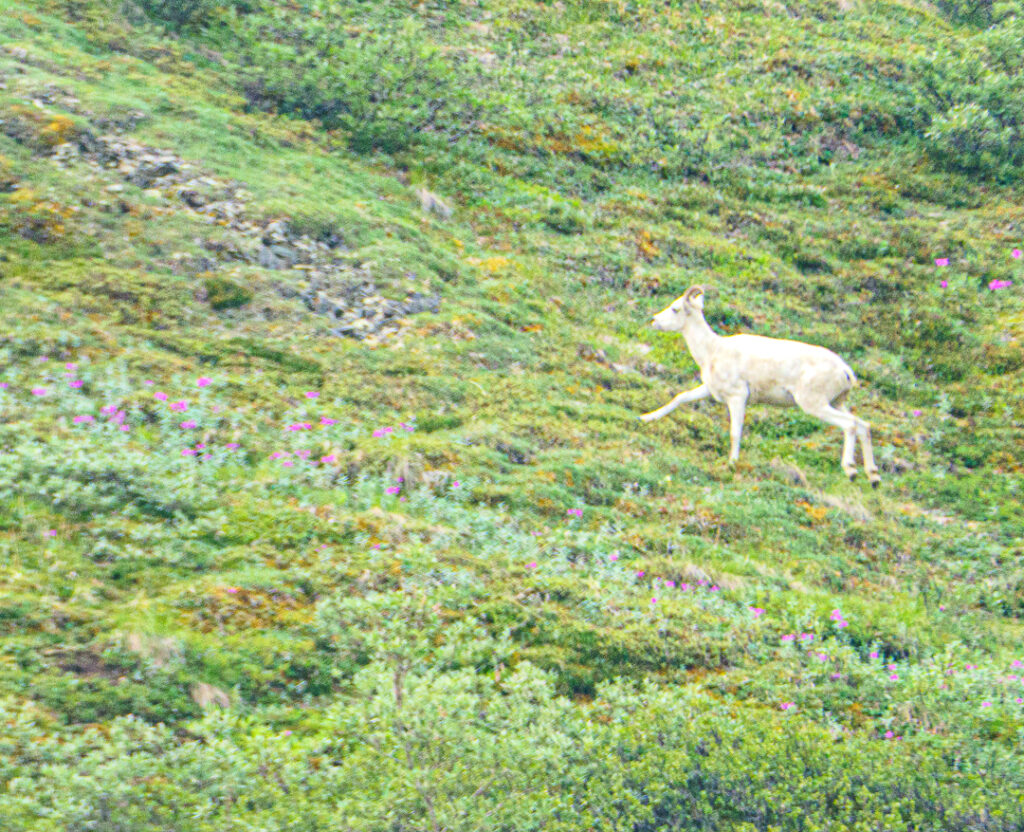 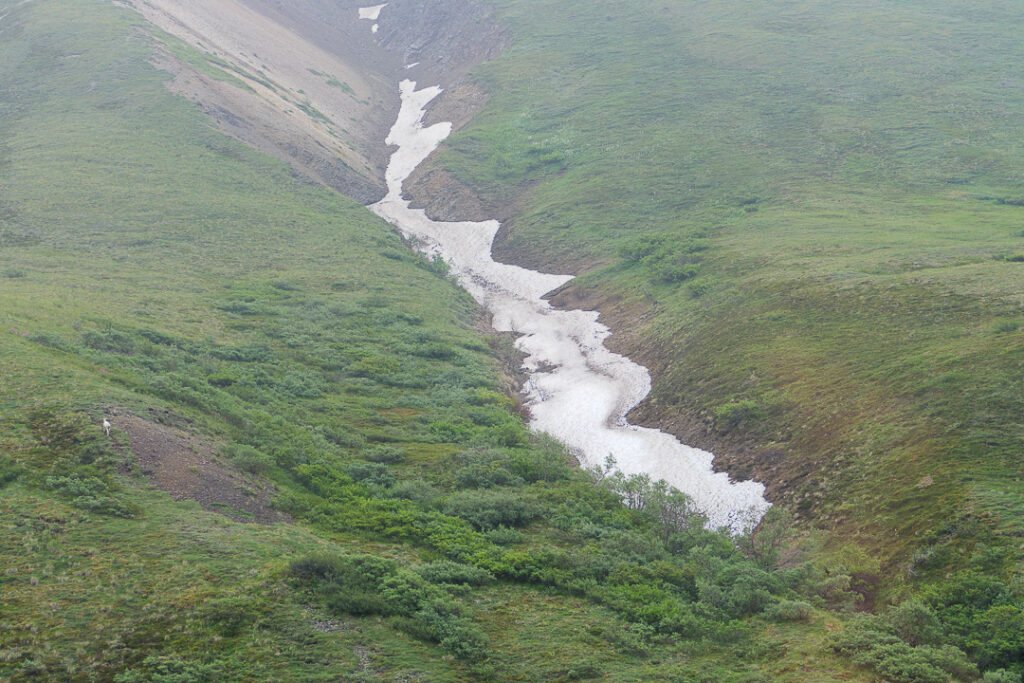 There was a batchelor band of Dall sheep at the top of a ridge on the other side of the bus; I didn’t get to see them with my own eyes but Cassie used her video camera to show them to the whole bus, so I guess they count! 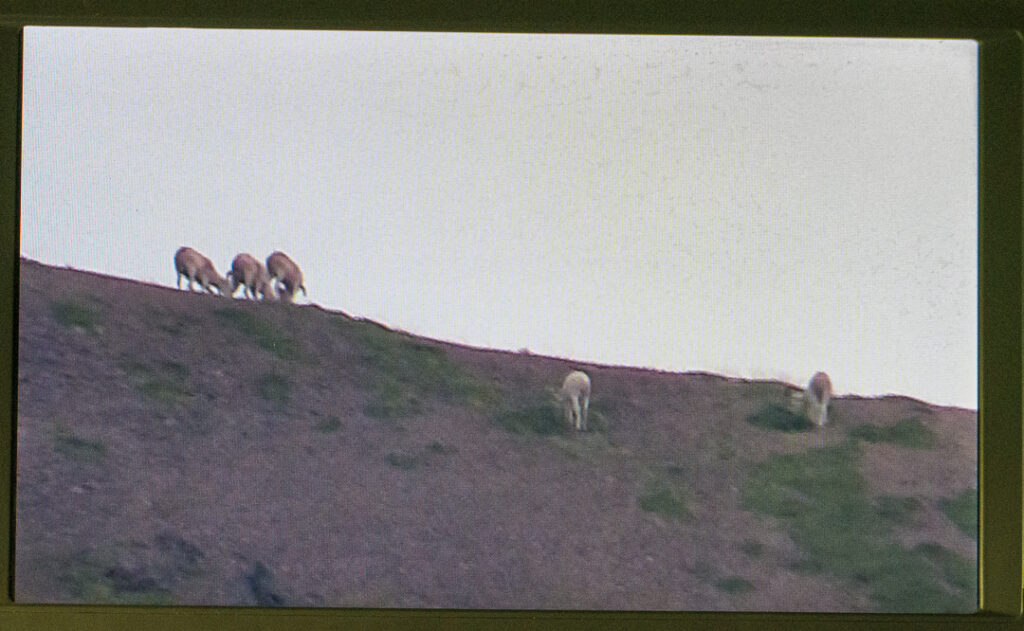 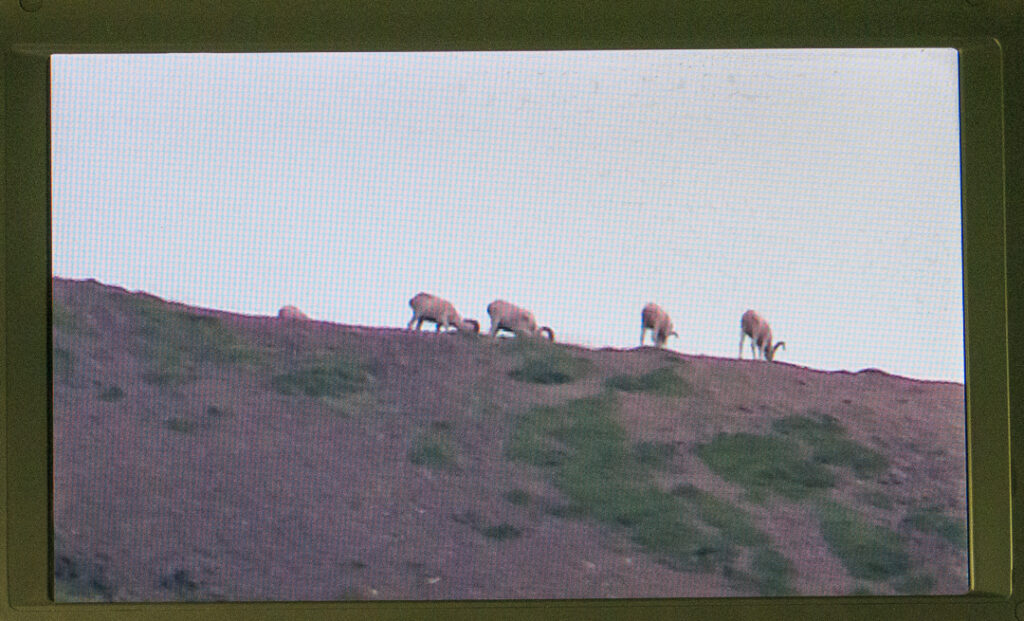 Our next sighting was a Willow Ptarmigan. It was on the far side of the bus and I didn’t really see it – but I did get its photo. When I was sorting through my photos from the trip today, I thought there was something unusual near the lower left of this picture, and I was right. 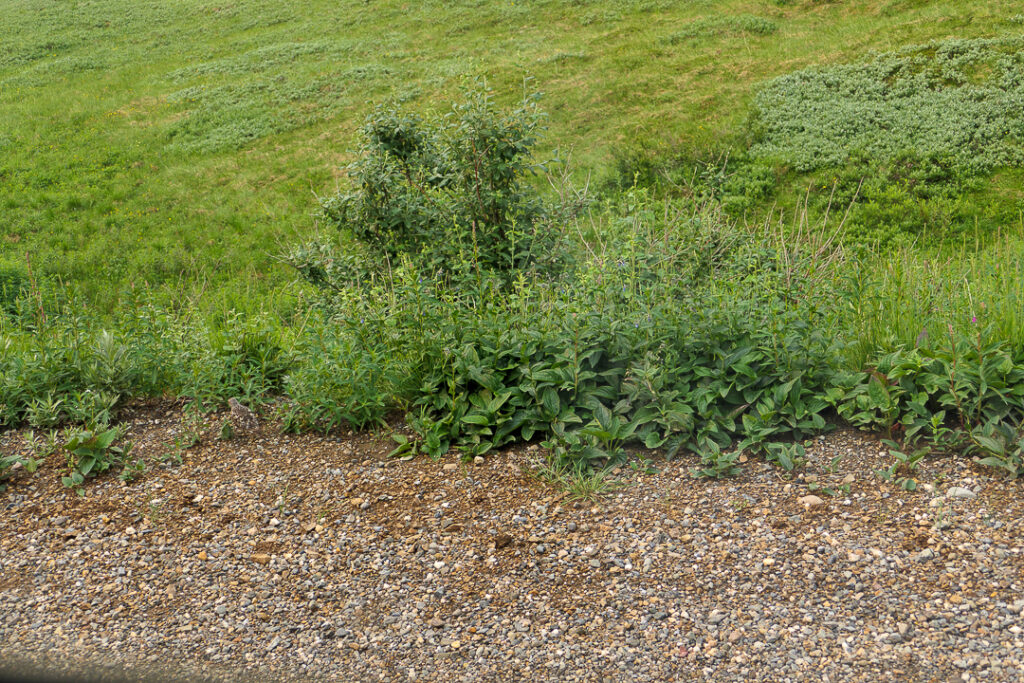 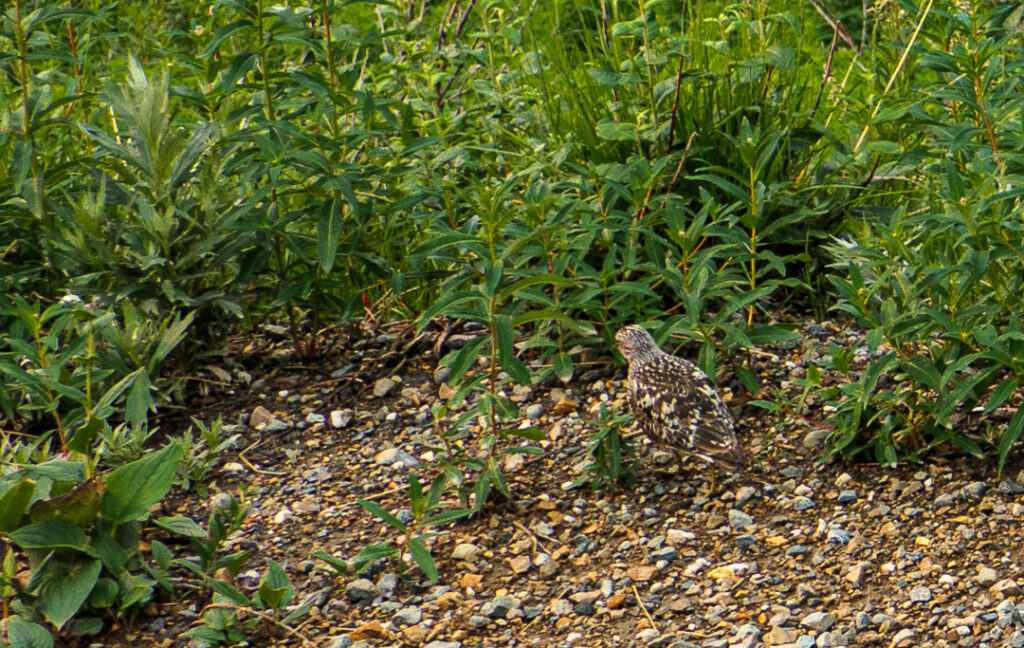 The Park Road is 90 miles long, but it’s closed at Mile 43 due to a huge landslide, so we turned around there. Cassie gave us another chance to get out of the bus (it had been an hour) – she had a hard time getting us back! 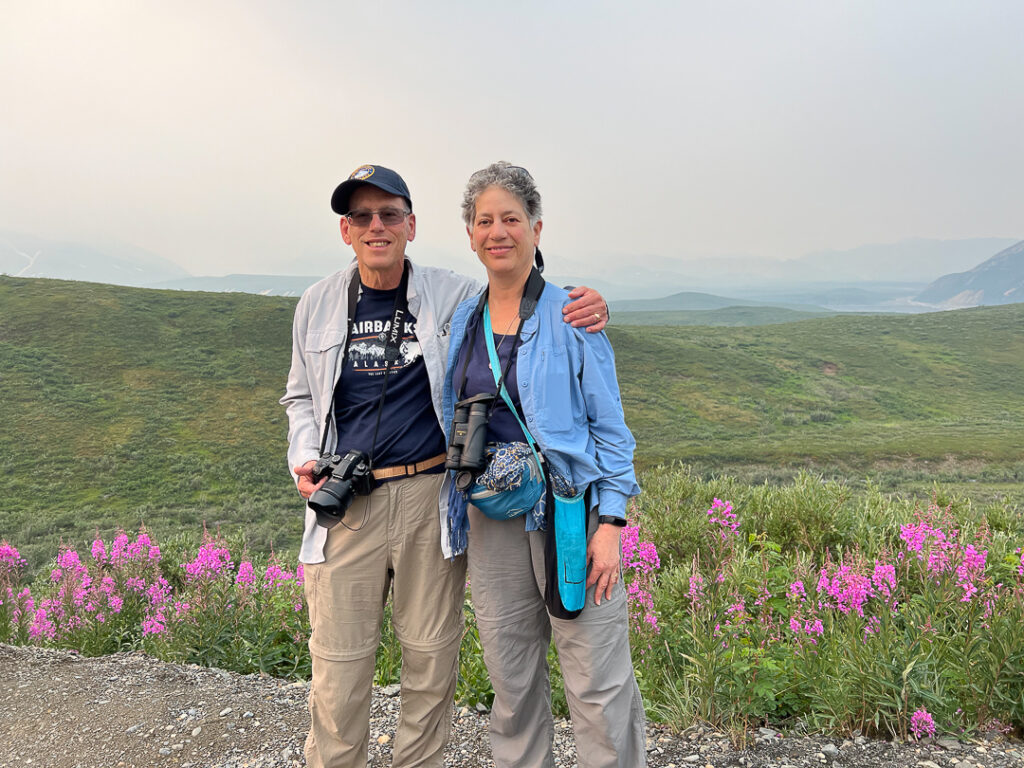 About 20 minutes into the return trip, the cry of “Stop!” rang out – someone had seen a caribou to the right of the bus. 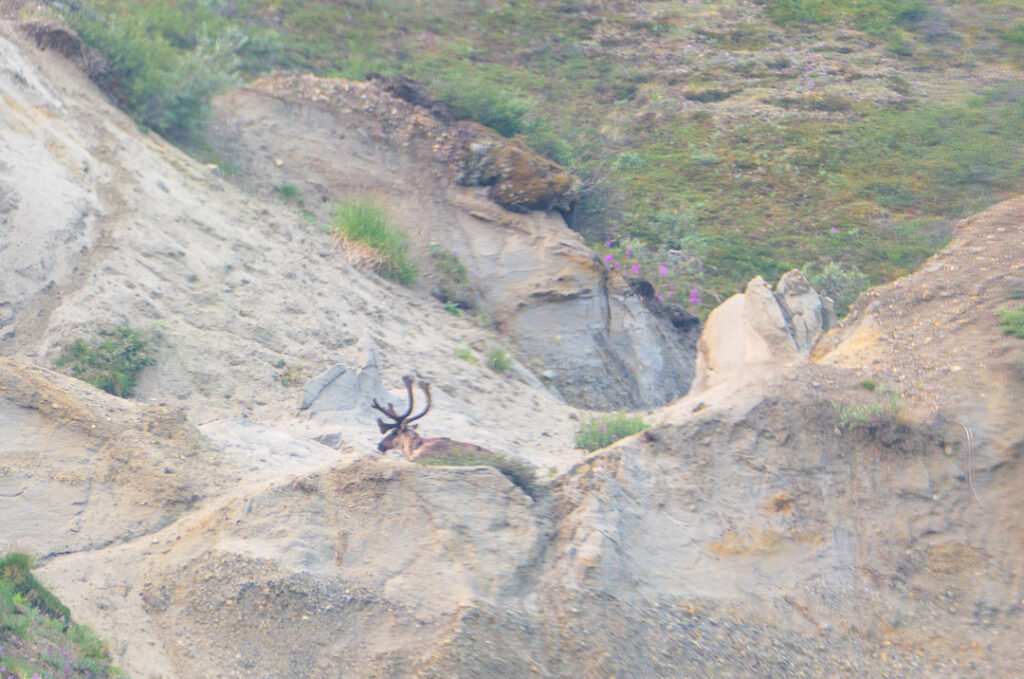 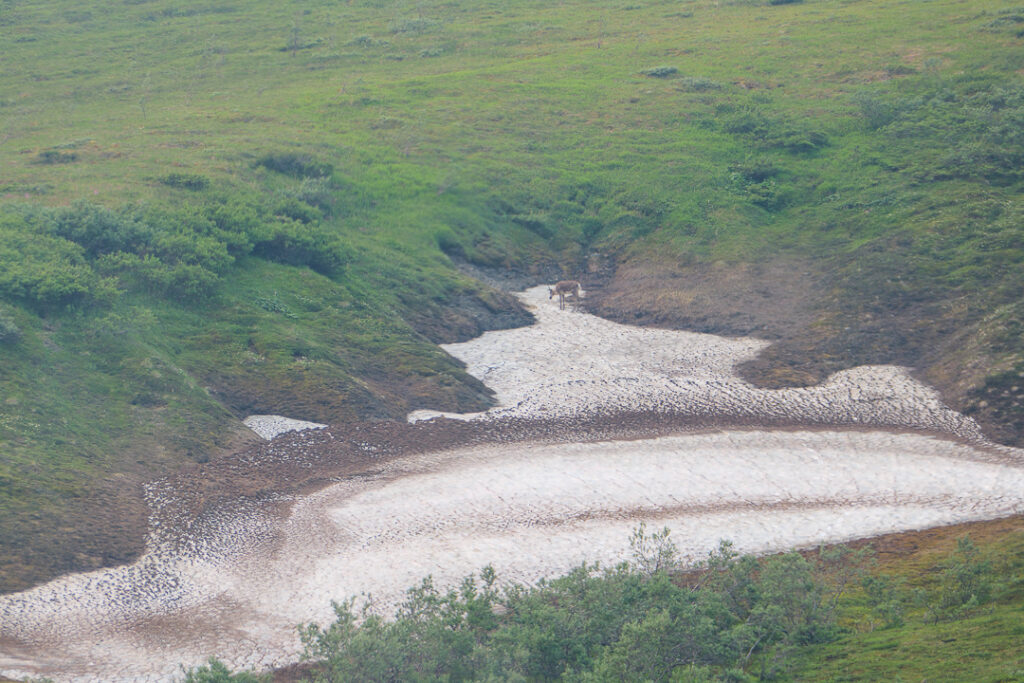 When they were building the Park Road, they set up cook shacks every ten or so miles to keep the workers fed. Today, those shacks house Park Rangers during the winter months. 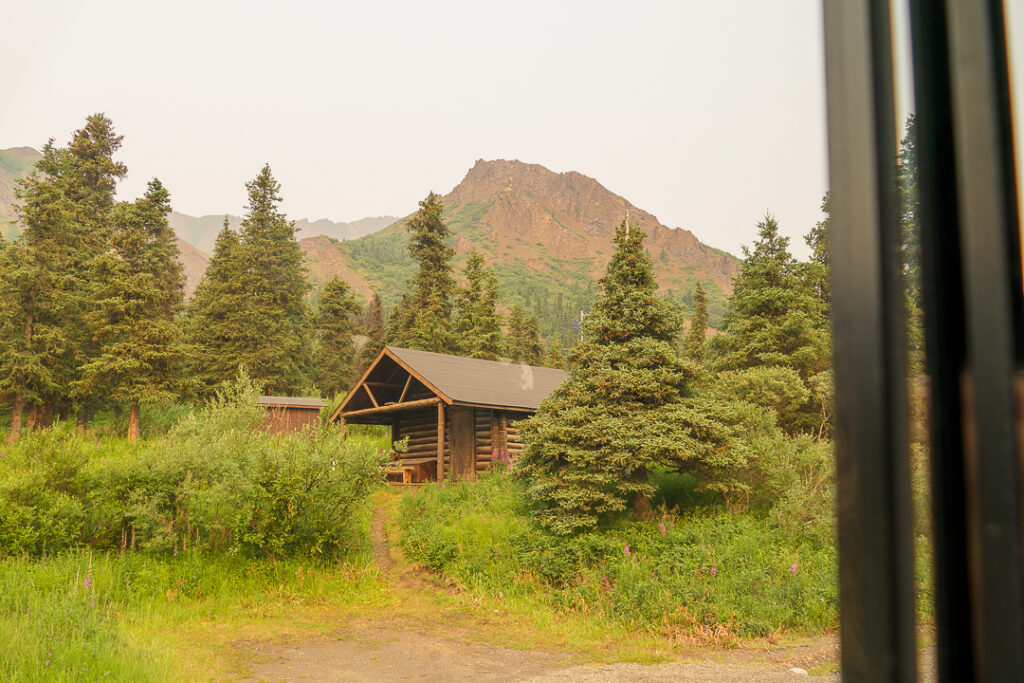 Tourists can drive their own cars into the park, but only to Mile 15 on the Park Road. There’s a checkpoint there – and an interesting rock formation. 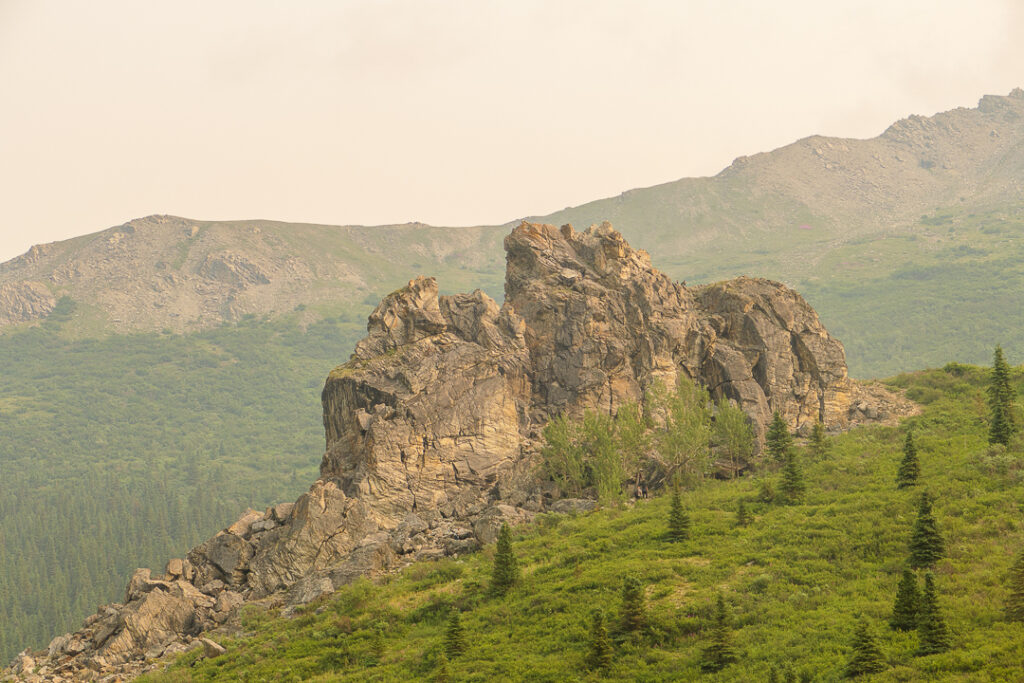 During the winter, the Rangers use dog power instead of snow machines; the sled dogs live at the park year-round. Volunteers take them out for a run every day. 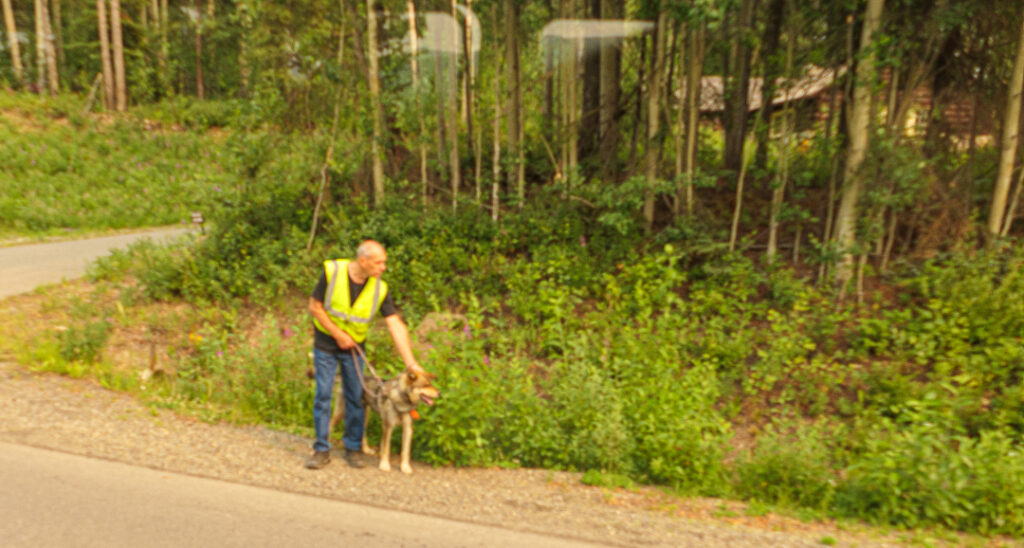 And that was the tour. Cassie told us that we’d seen more interesting animals than was typical; unfortunately, we were quite typical in not seeing Denali itself – only 30% of the people who come to the park see the mountain.

We returned to the Denali Park Resort (our hotel) for lunch. That was a mistake – the restaurants aren’t open for lunch! There are two dining options: the coffee bar and the bar bar. The coffee bar offered only pre-packaged sandwiches; the bar bar had four dishes on the menu, only two of which were available. None of the choices appealed, and there was no transportation available to the park for a couple of hours.

Fortunately, we’d been told about the Thai food truck at the Denali Grizzly Bear campground across the Parks Highway – we walked over and were pleasantly surprised. 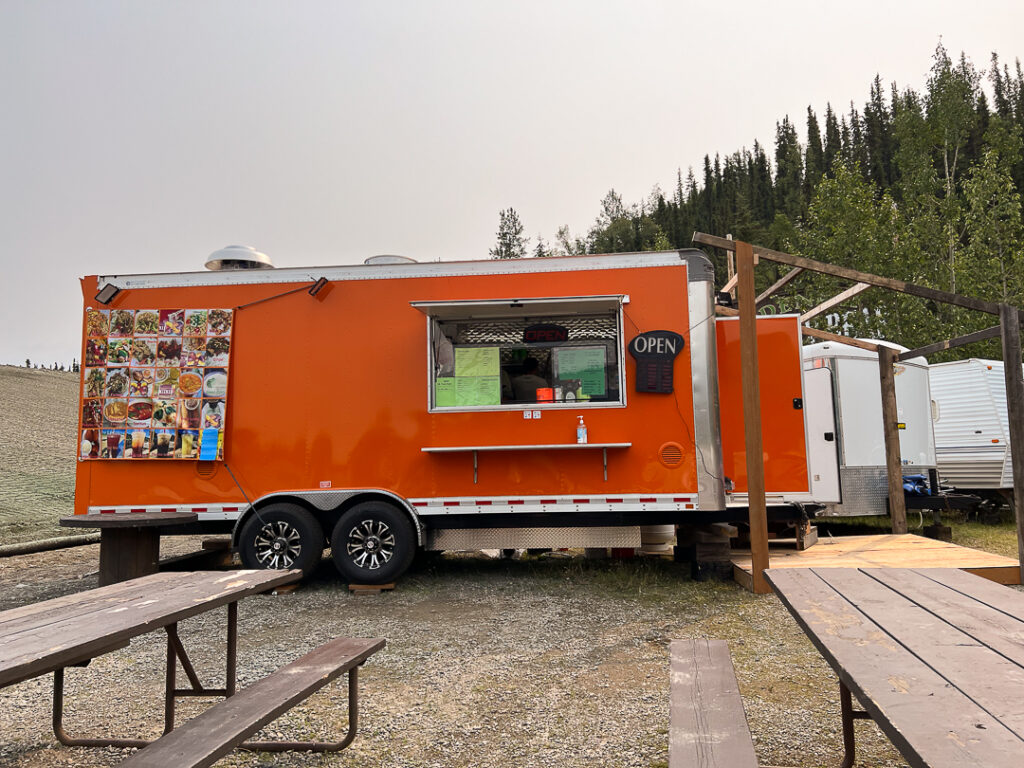 This afternoon, we took a very short hike on the Oxbow Trail in Denali Park; the trailhead is just across the river from the resort. 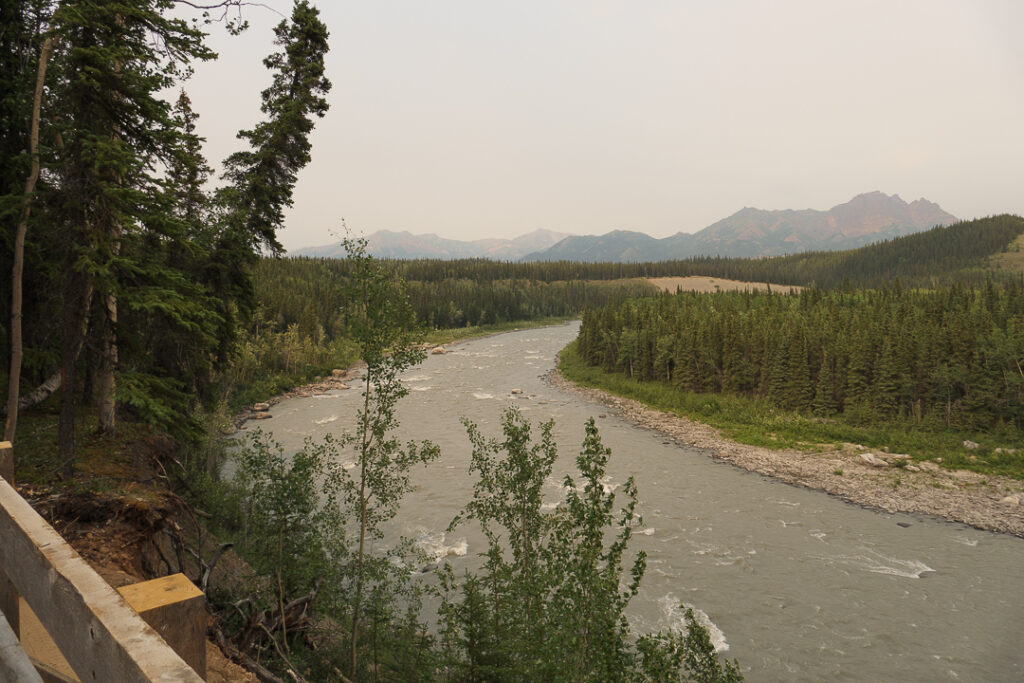 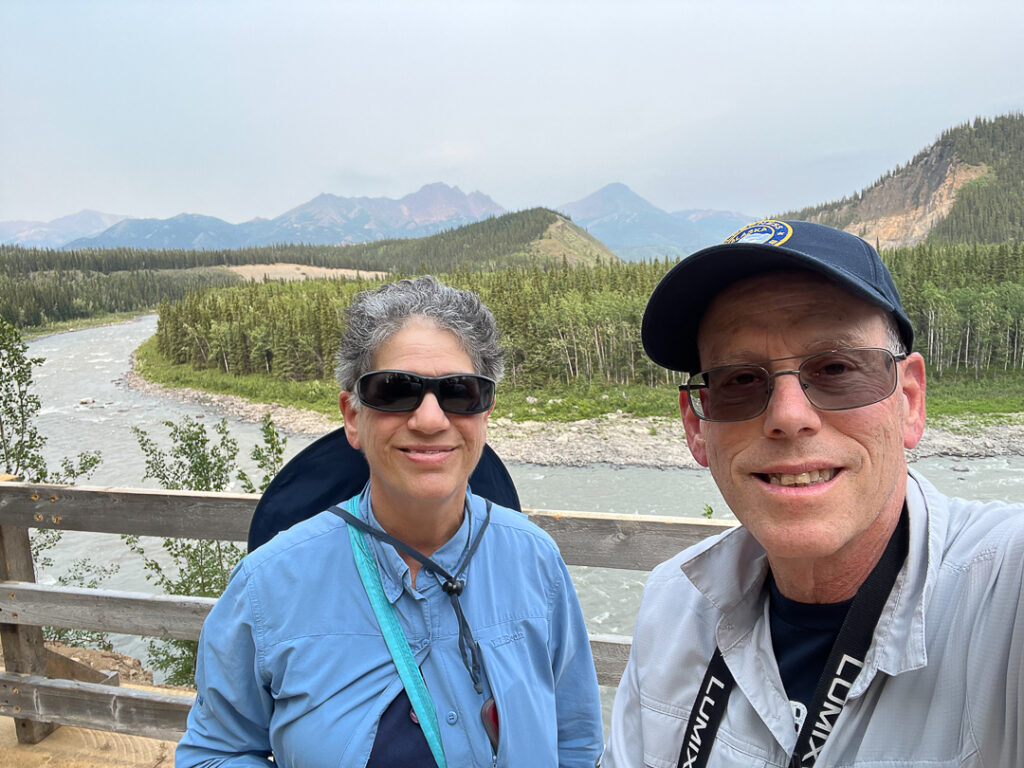 We had to get back to meet our friends for dinner – fortunately, it was only a ten-minute walk! 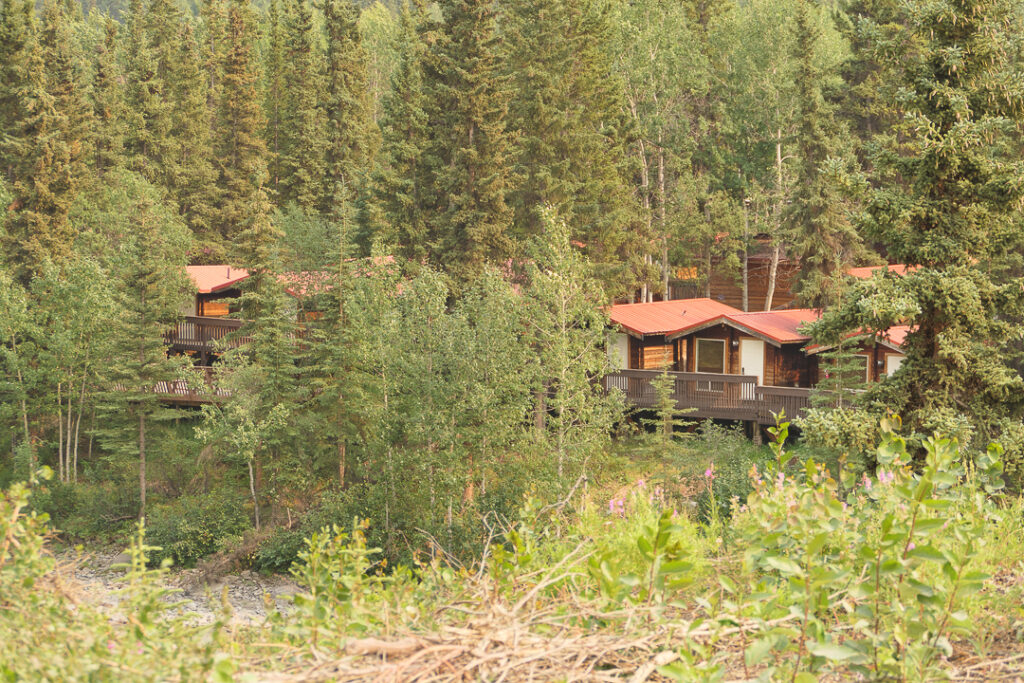 We leave Denali for Talkeetna tomorrow morning; bags don’t have to be out in the hall until 8:30am, a positively civilized hour!

One thought on “A day in Denali Park”