Today began bright (what else would you expect? We’re in Alaska in the summer) and early so that we could get our bags into the hall by 6am and depart for Denali on the Wilderness Express. They got us to the depot before 8 and we boarded our tour group’s private car for the day, complete with a bar. 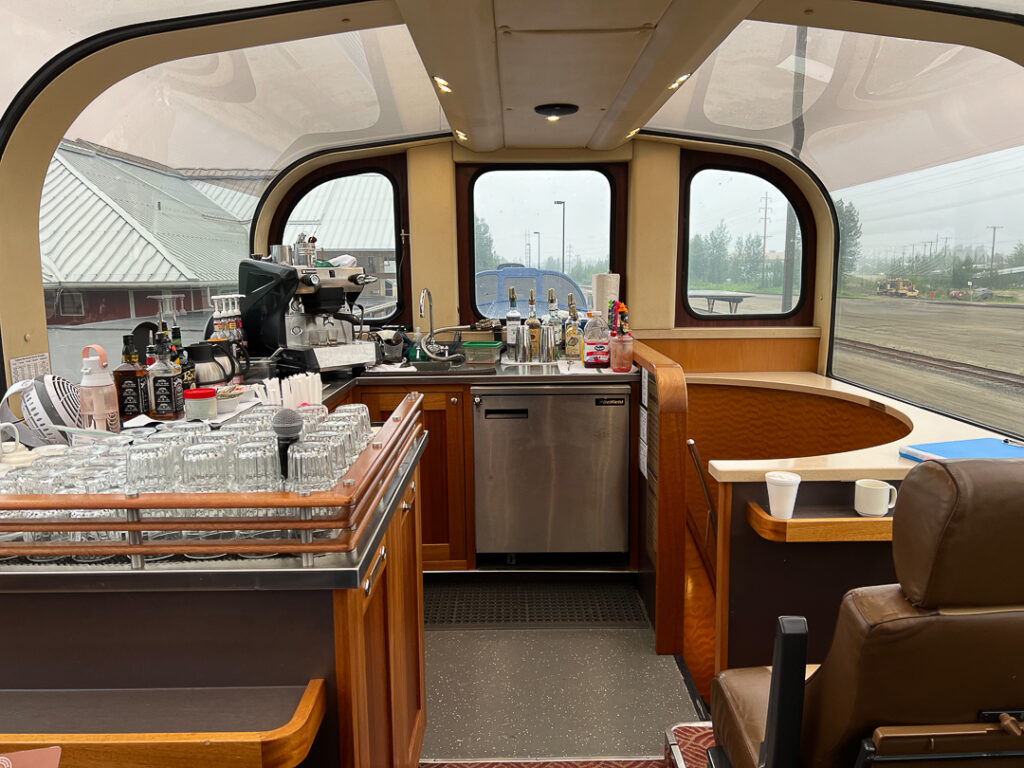 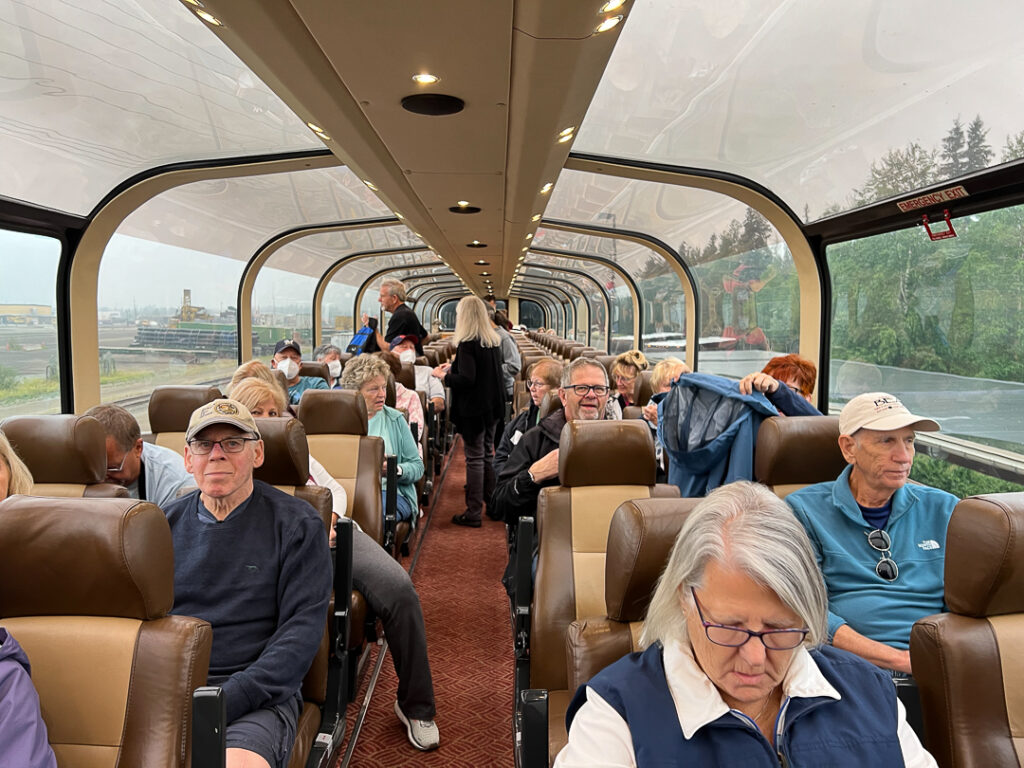 We left around 8:20, and a few minutes later we were leaving Fairbanks, just as the temperature was finally getting more reasonable – it was the coldest temperature we’d seen on the trip so far. 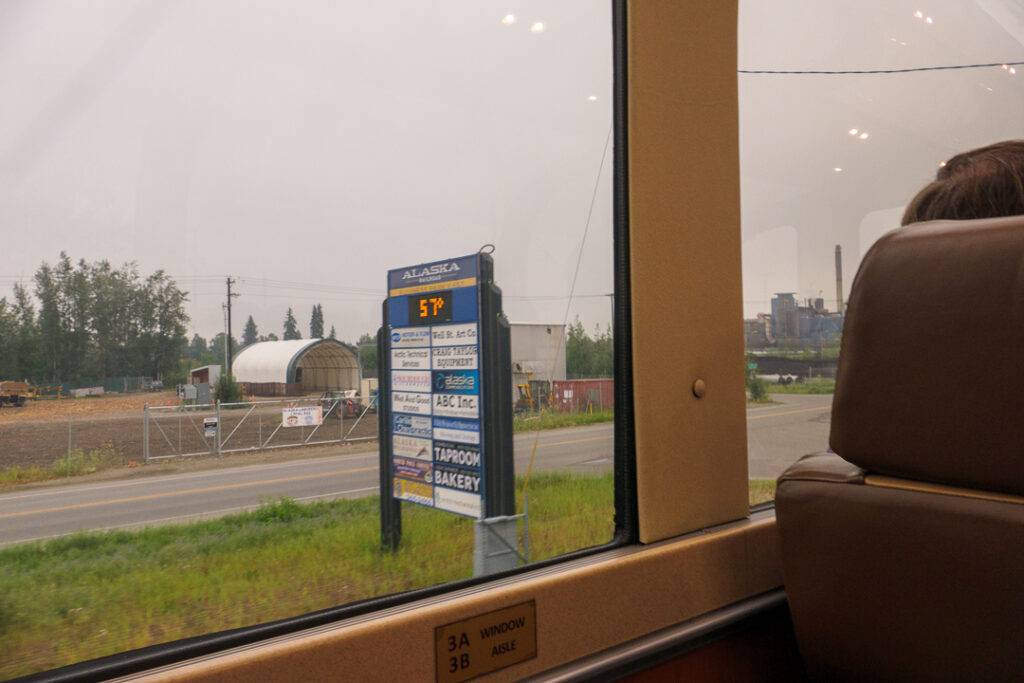 The car was two stories high with lots of glass on both floors. The restaurant was downstairs, and there was Alaskan art decorating the staircase. 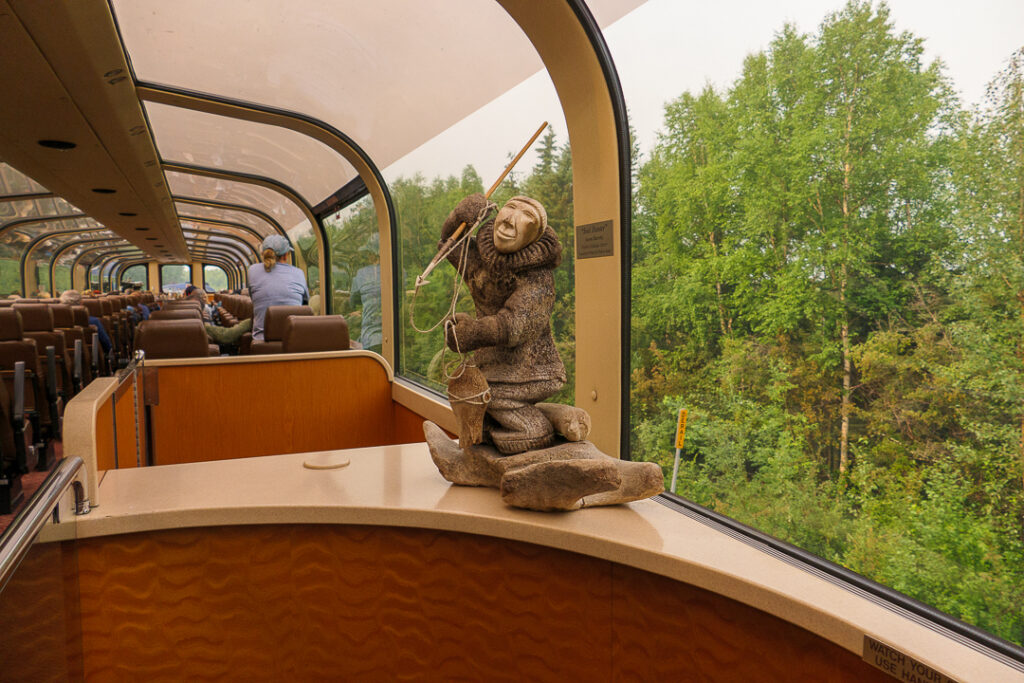 The first two-thirds of the trip was mostly through spruce forests and one small town, Nenana (on the Tawana River). There were lots of curves where we could see the front half of the train (the Wilderness Express cars are at the rear). 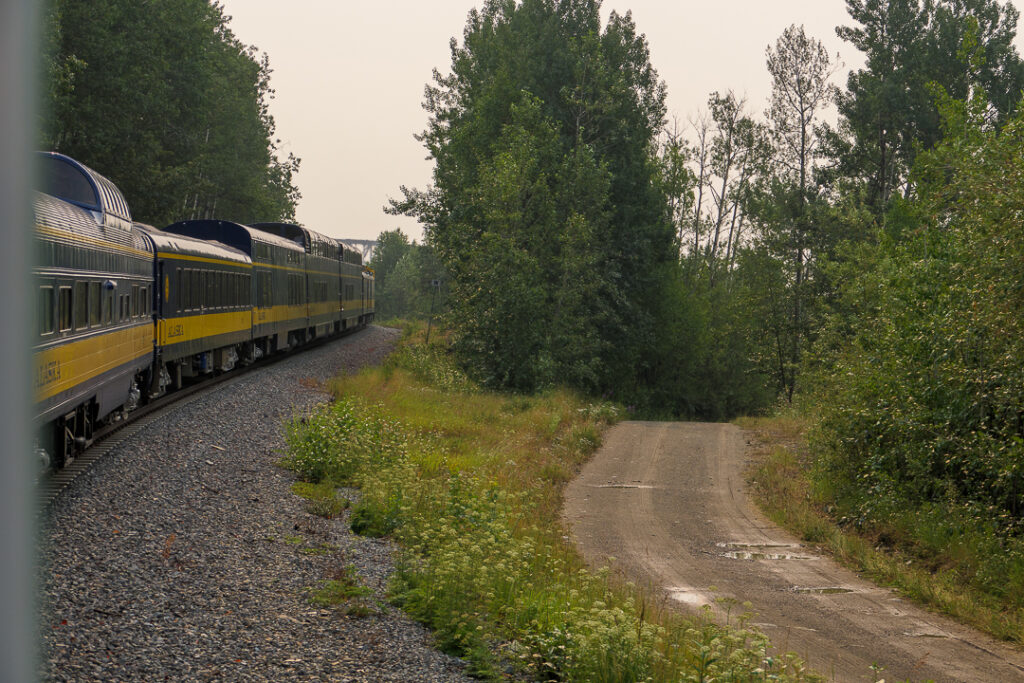 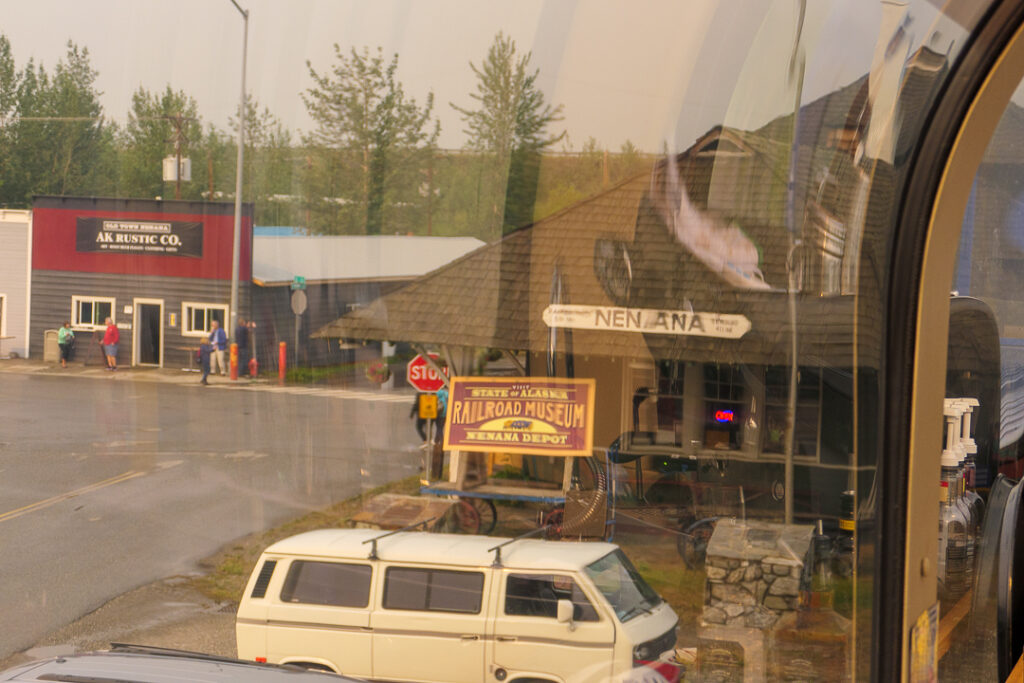 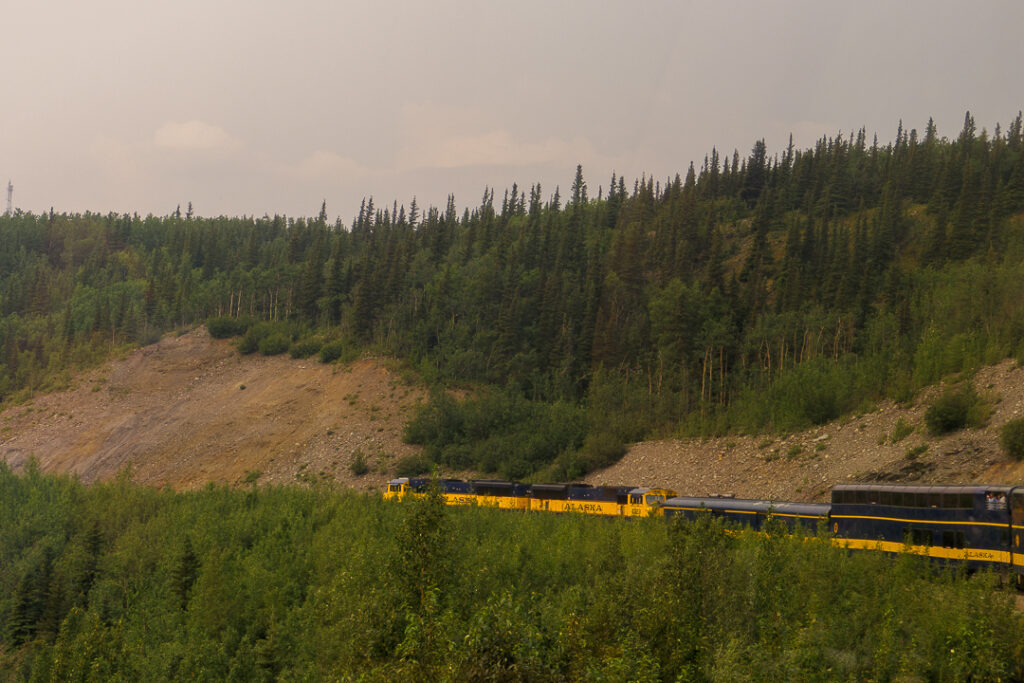 The scenery started changing about 11:30am as we started paralleling the Nenana River (like the Tawana, it’s glacier-fed and milky) as we neared Denali. 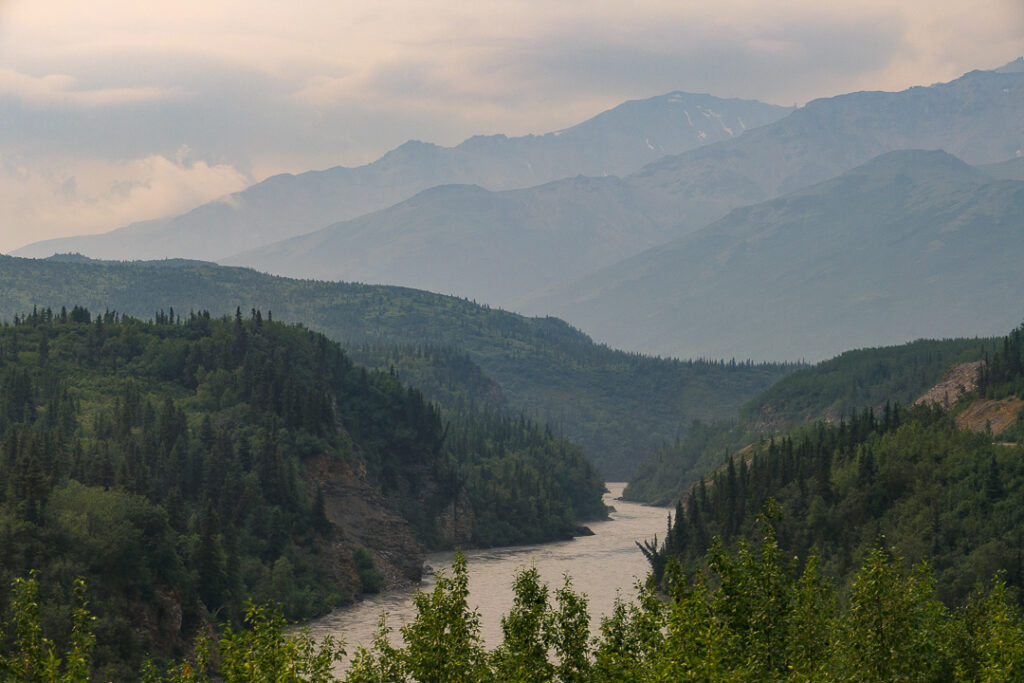 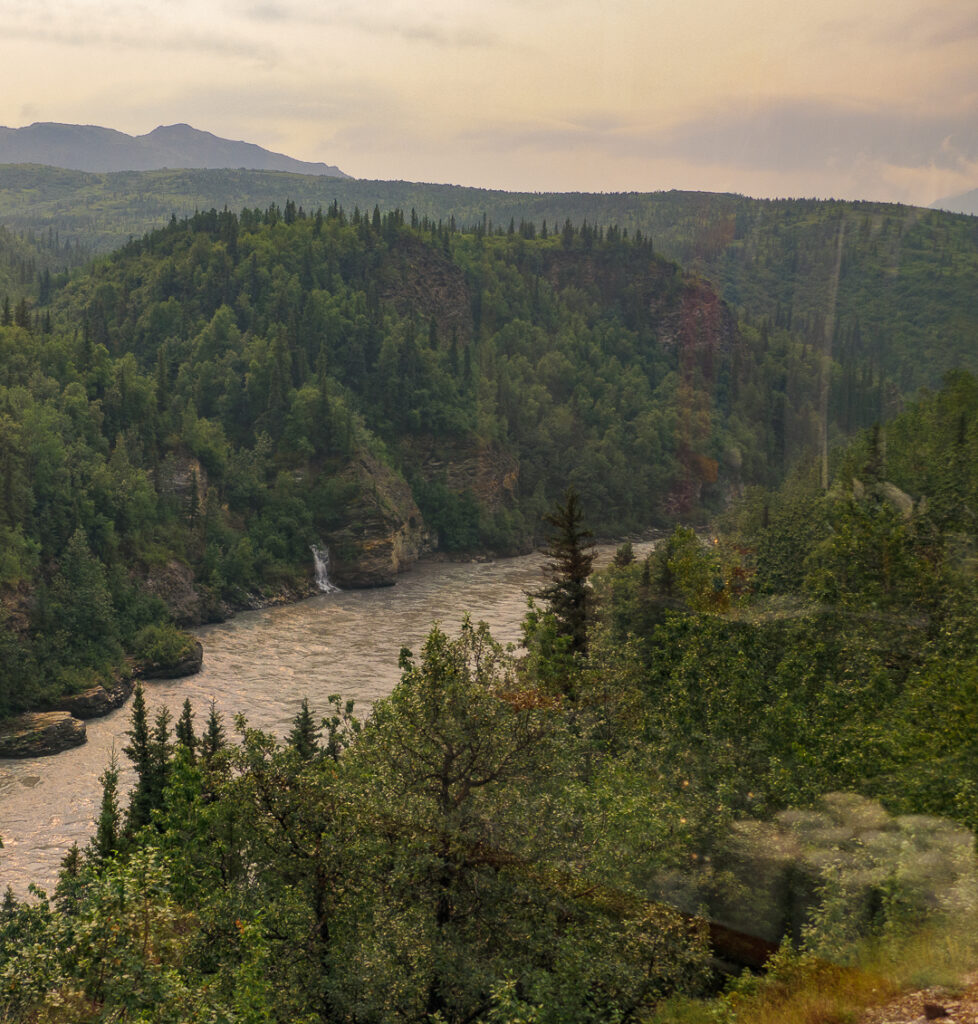 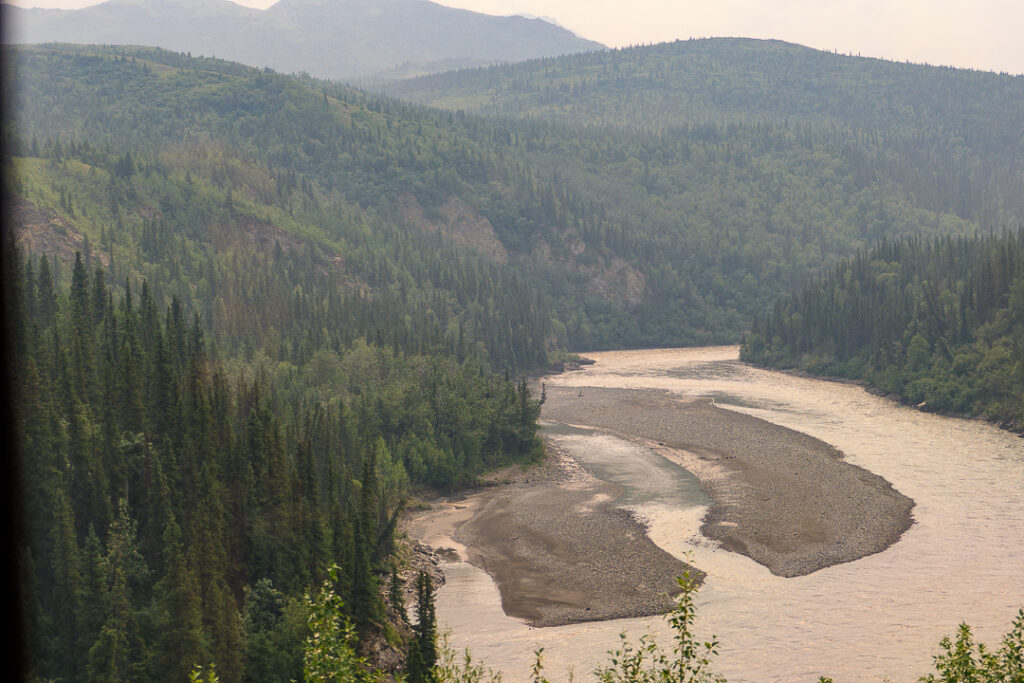 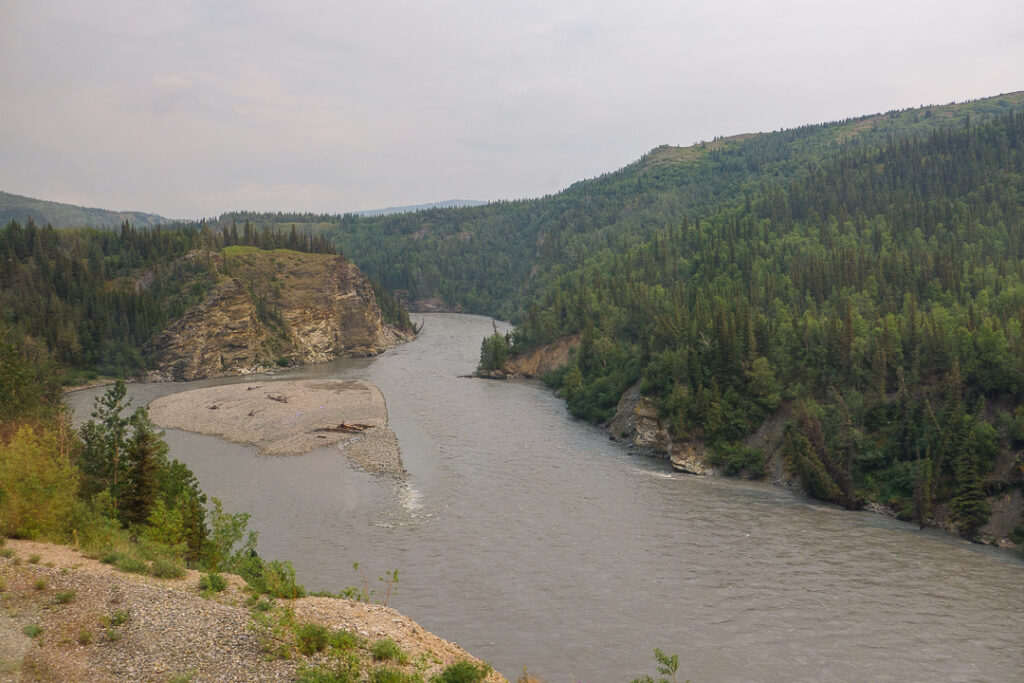 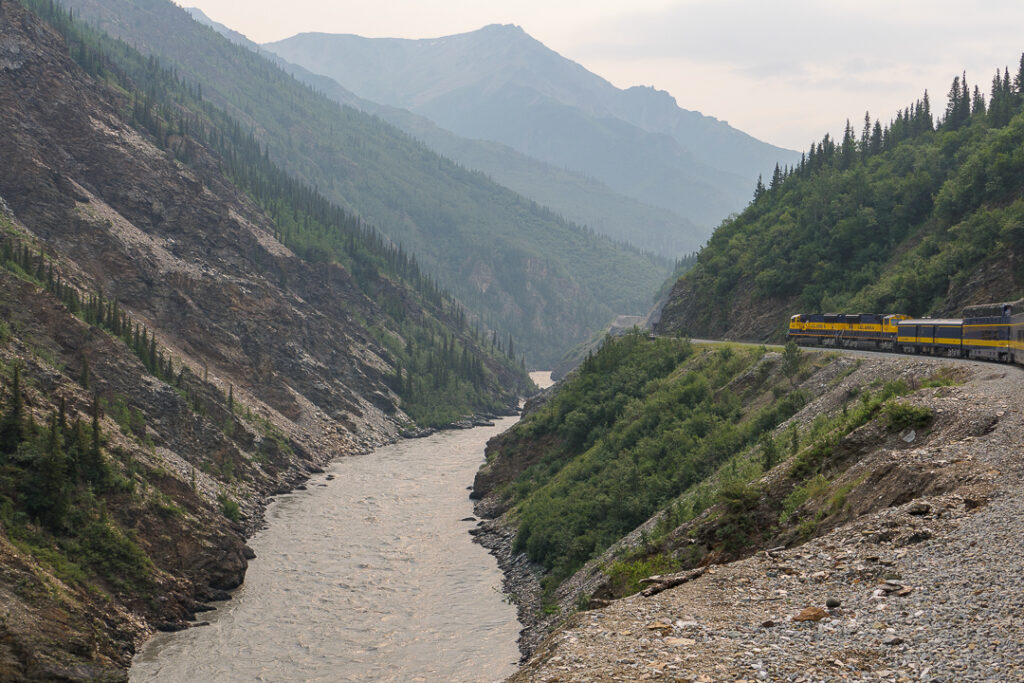 I knew we were nearing the park itself when we started seeing rafters in the river – they have to wear dry suits because the water is very, very cold. 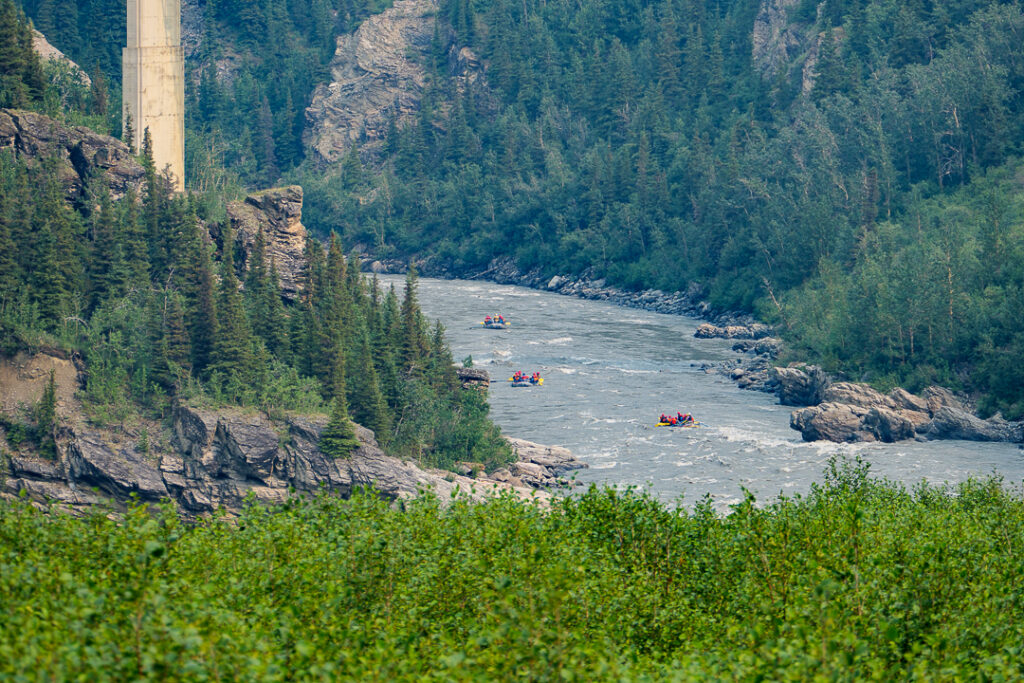 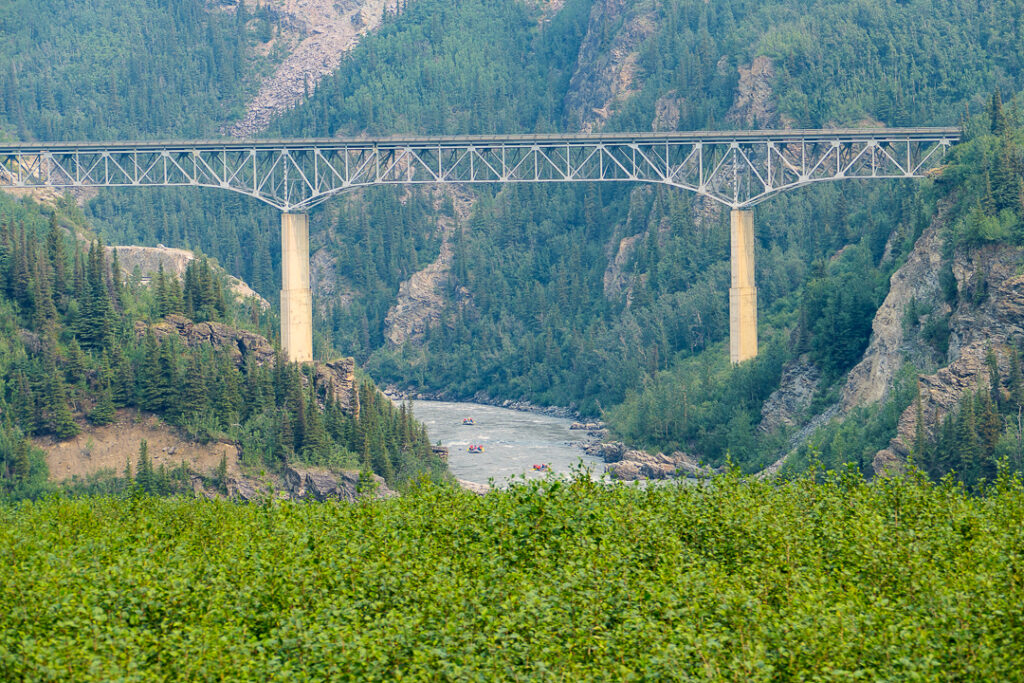 We reached Denali Depot a bit after noon and were faced with a choice. We could stay in the Park and take a shuttle to our hotel in a few hours or go with our bus to “Glitter Gulch” (Nenama Canyon) for lunch and some light shopping before the bus took us to the hotel (the Denali Park Village). Our Tour Director strongly suggested the latter course, and we agreed. “Glitter Gulch” wasn’t all that glamorous, but we had lunch and then walked down the bike/pedestrian path to the bridge over Kingfisher Creek.

Hikers had built cairns in the retaining wall near the North end of the bridge for, as far as I can tell, no particular reason. 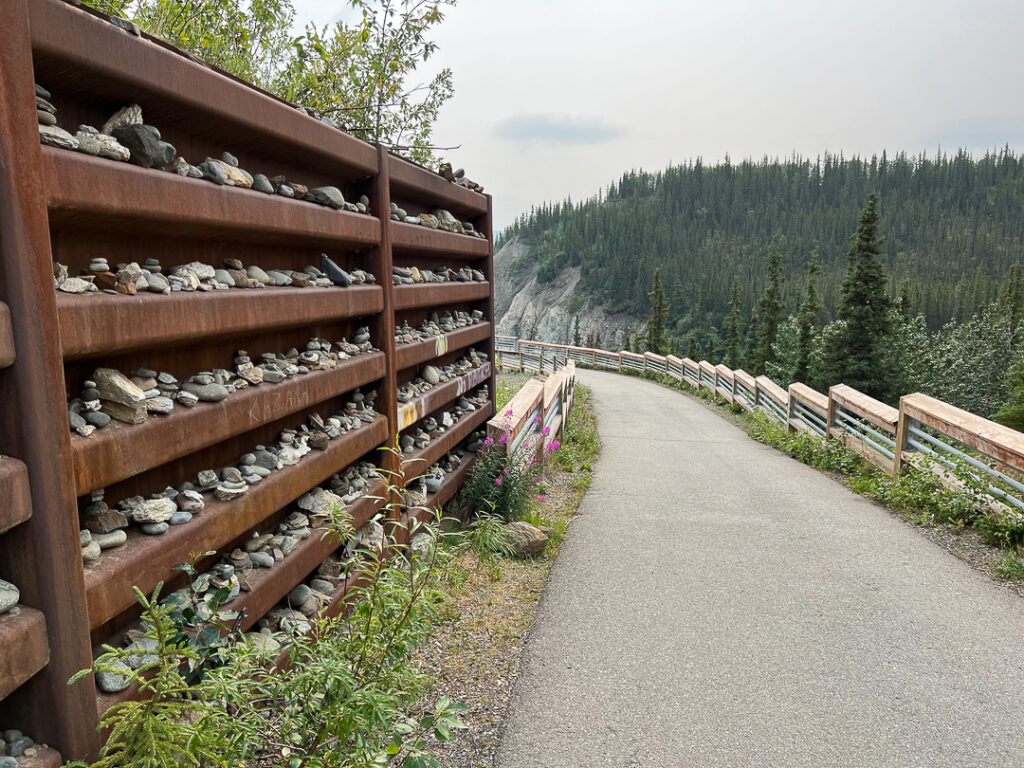 We walked to the second viewpoint on the bridge and then turned back to the Gulch because it looked like we were going to be hit by thunderstorms. 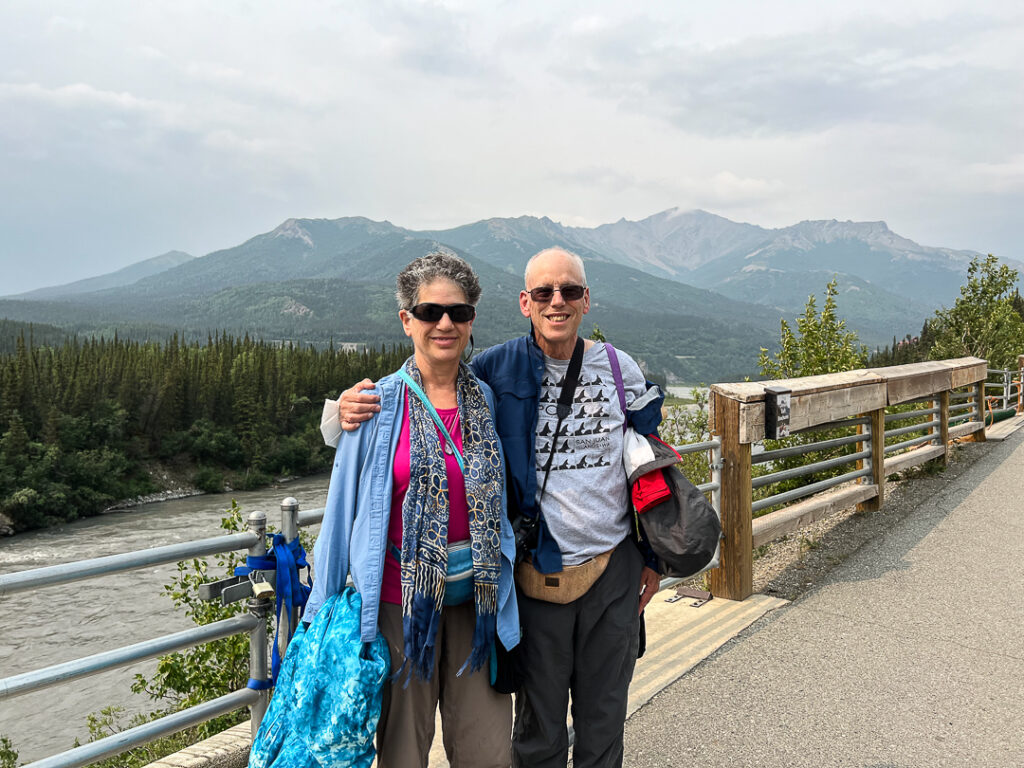 The storms never arrived, so we looked around some more, talked with the bus driver, went shopping for chocolate, and enjoyed a comfortable ride to the hotel. Two of our friends, serious dog people, had stayed in the park to see the sled dogs – they thought it was great, even though they had a hard time getting to the hotel due to shuttle issues.

The hotel is pleasant (even without air conditioning) and is on the Nenana River. Unfortunately, our room faces an interior road, but there’s a nature walk along the river that we enjoyed before dinner. 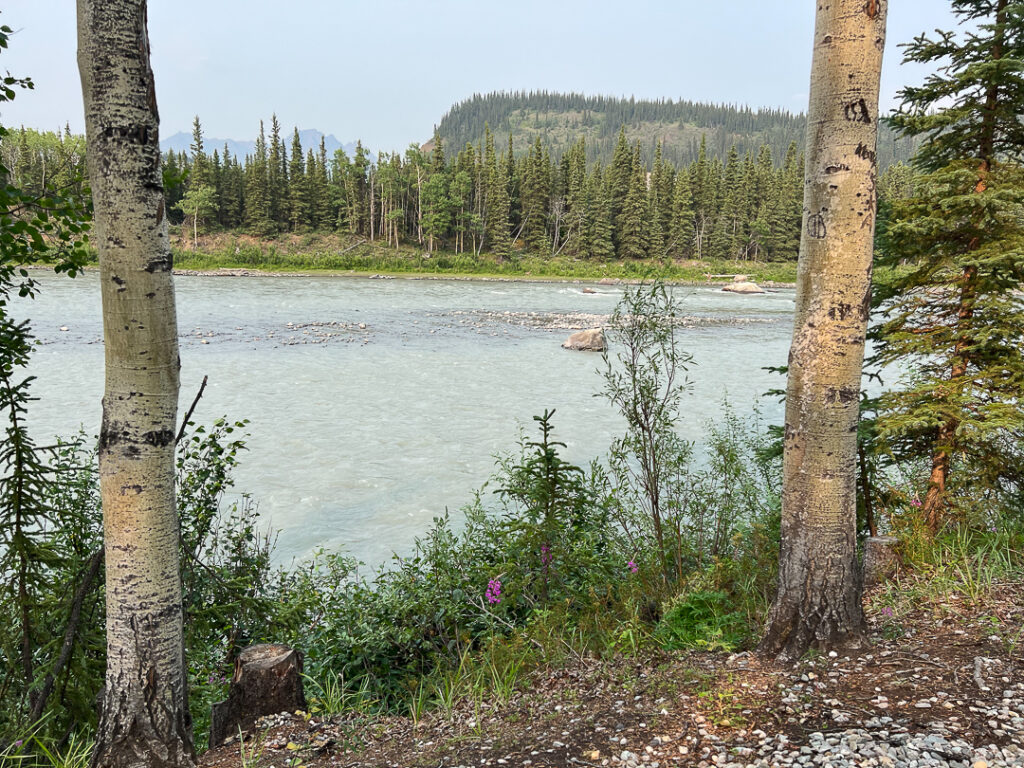 Dinner was a musical show called “Cabin Nite” – the cast (who doubled as the wait staff) were early settlers in this part of Alaska and they told us why they were here. Robert W. Service poems were prominent, beginning with the pre-show outside. 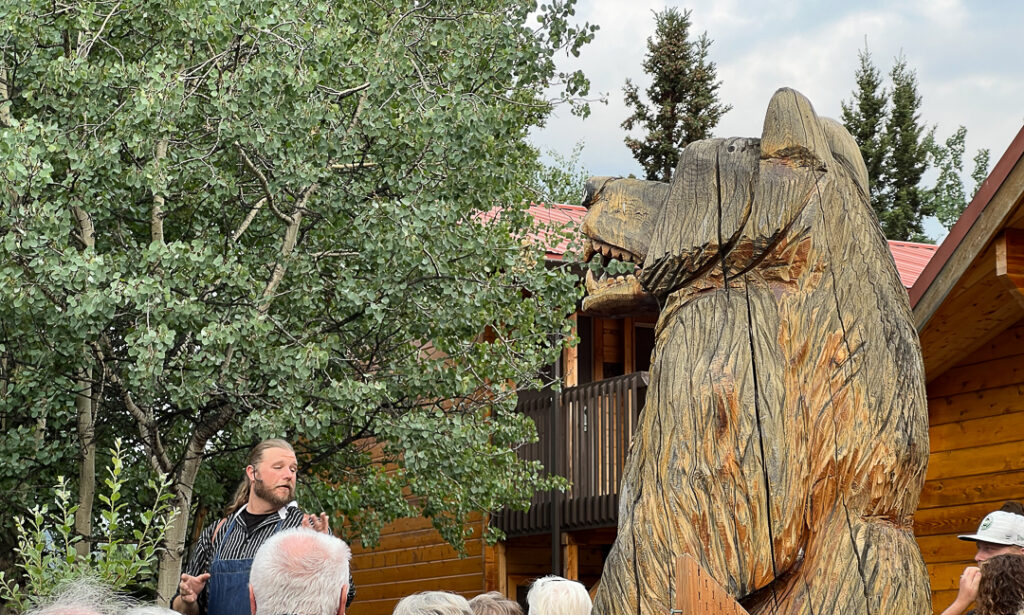 Several of the cast members came around to the table so we could take close-up photos – thanks, Wendy, for taking this photo of the chorus girl! 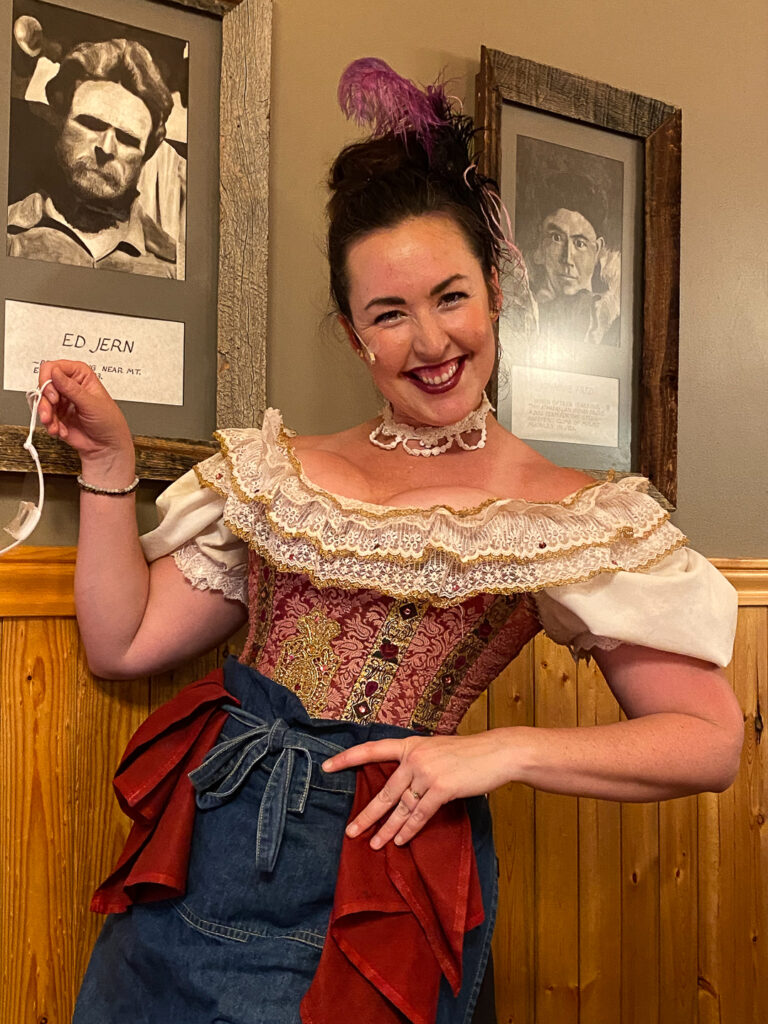 Tomorrow morning, we’ll be taking the Tundra Wilderness Tour, a 5-1/2 hour bus ride through Denali. We leave the hotel at 6:45am. Good night!