Morning came early today. We were picked up at 4:15am for the almost 3-hour drive to The Great White House in Gansbaai, for an opportunity to come face to face with Bruce. To be more accurate, I should say Bruce’s prototypes, real great white sharks.

We drove in silence and dark – I suspect some people were sleeping. I, on the other hand, did the morning Wordle long before my friends in the US would see it – sadly, I failed to get the word for the first time in over a month.

The sky started to lighten as we approached Gansbaai. 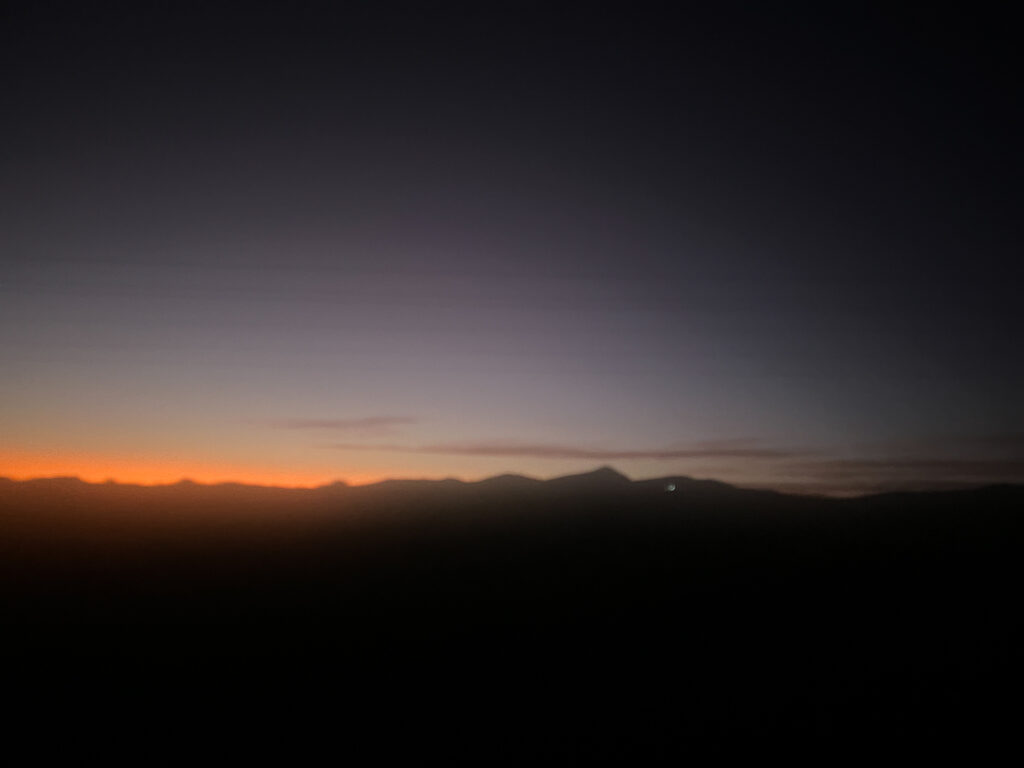 Day had broken by the time we got to The Great White House and looked down the road to Kleinbaai Harbor. 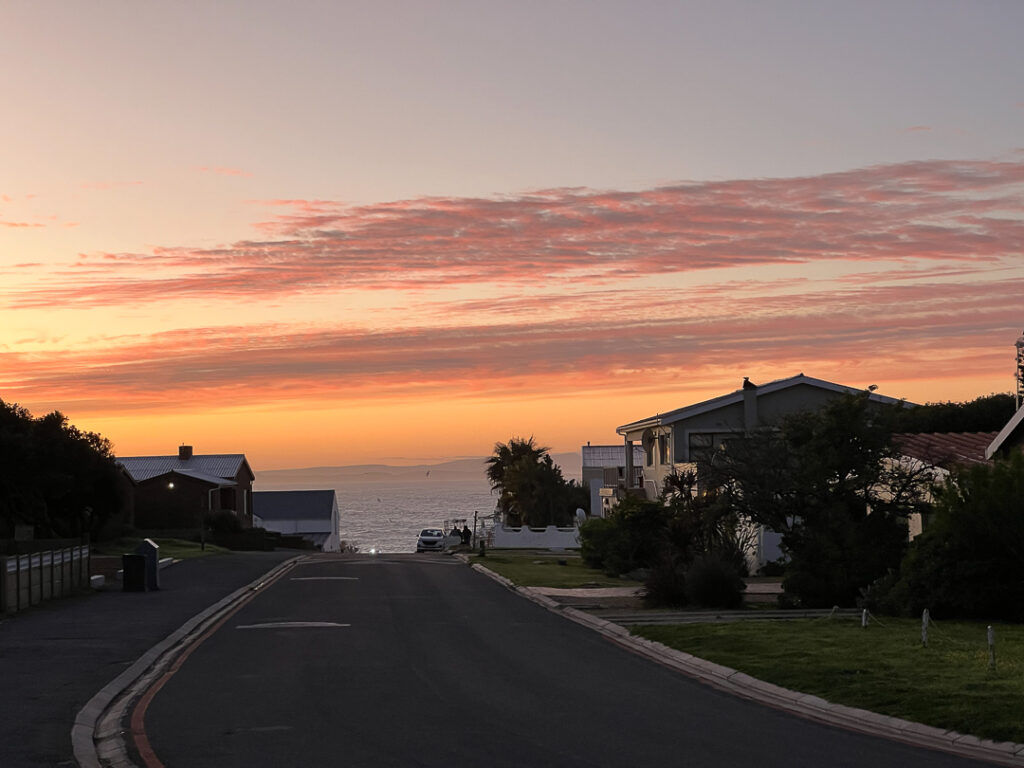 We entered and had a light breakfast. We met our guide for the day, Susie, and listened to the safety briefing – and signed the obligatory waiver. Then it was time to walk to the harbor and board the Slashfin for the trip to Shark Alley off Dyer Island.

The seagulls were hoping we’d drop something, I’m sure. 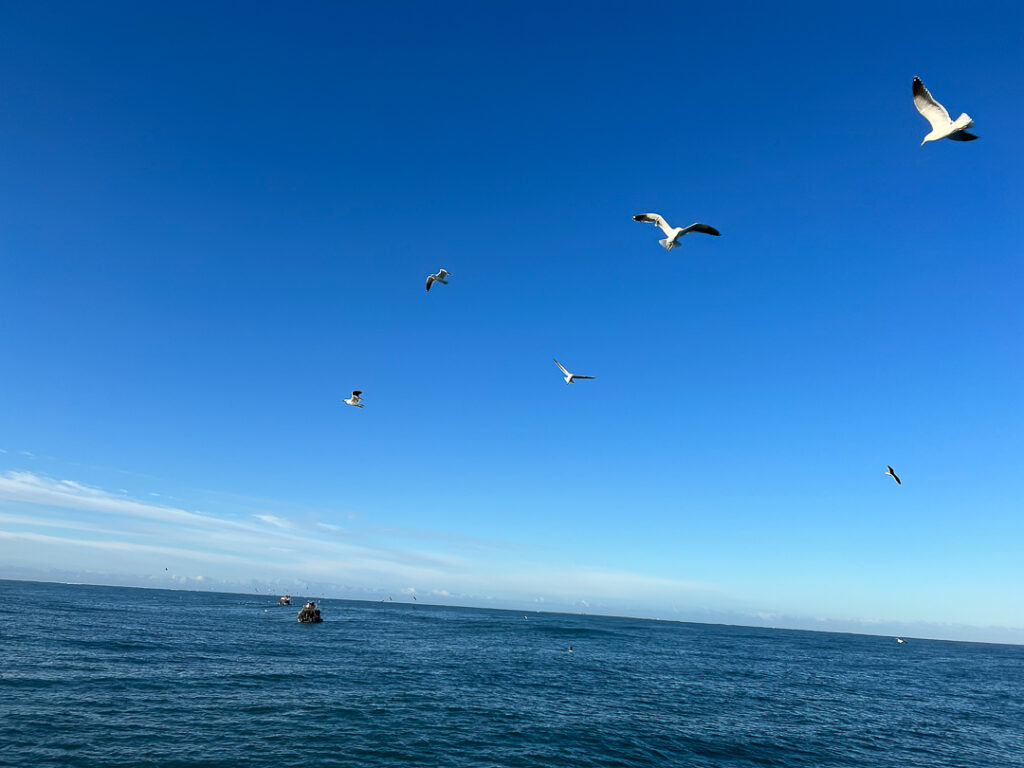 We took our seats on the top deck and had a rather bumpy ride out to the dive area. 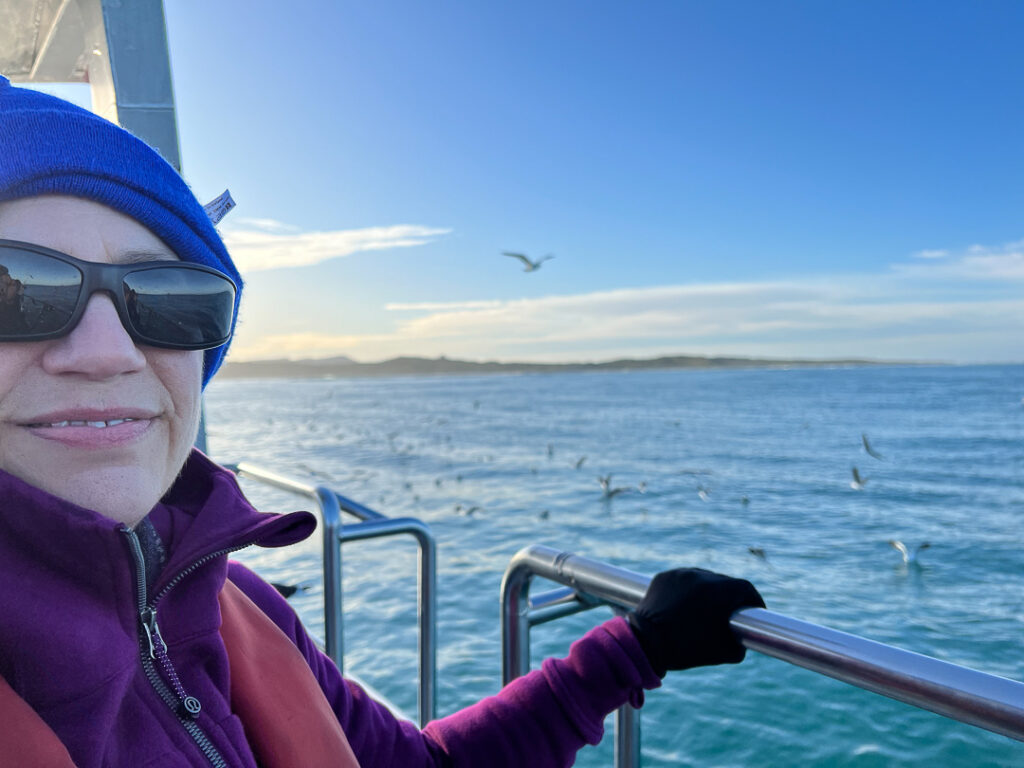 Diane decided to stay dry and fairly warm; I stripped off and donned the wetsuit, ready for my turn in the cage. 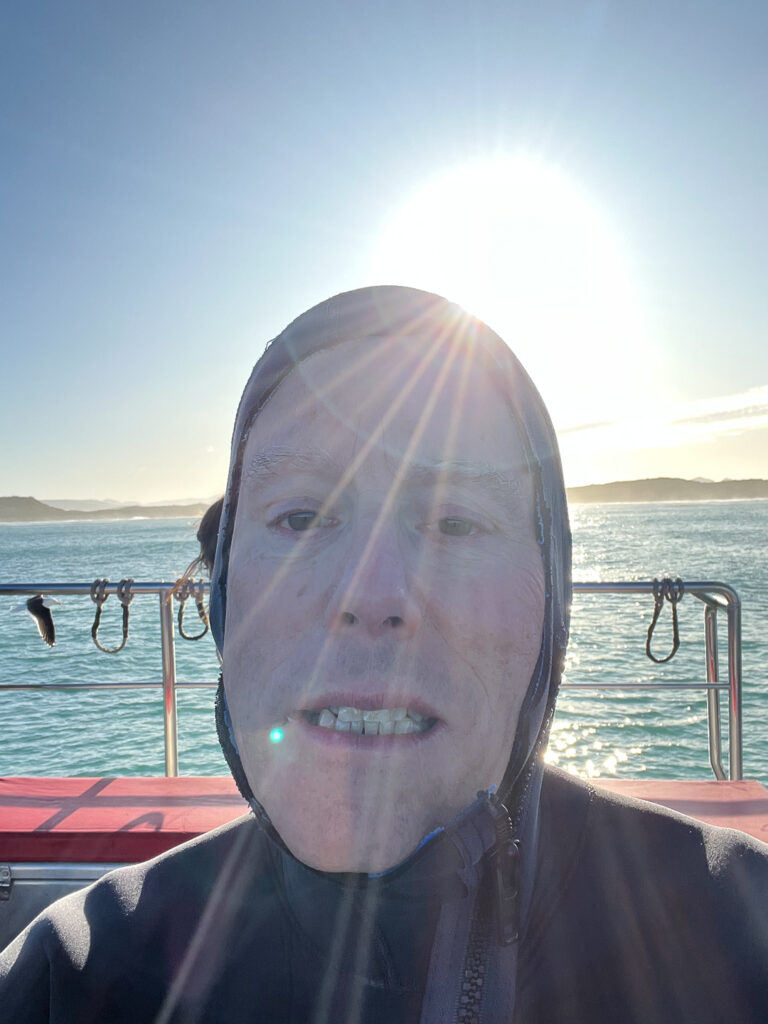 The crew uses salmon chum to encourage the sharks to come near the boat; the gulls liked it, too. 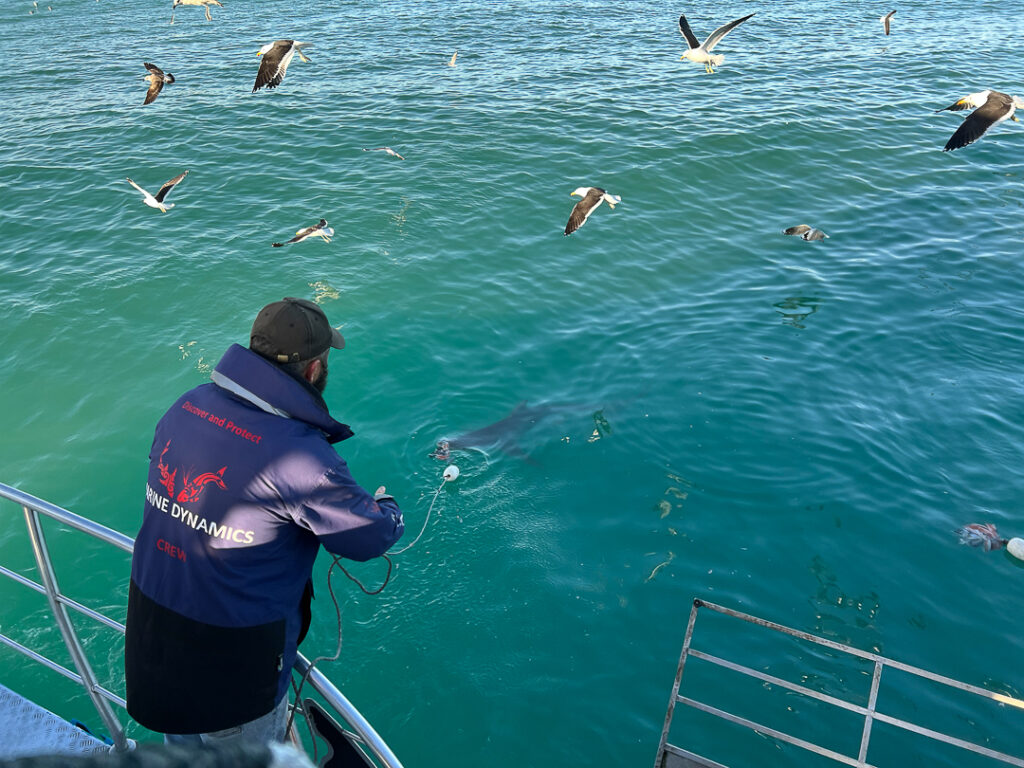 Sometimes the sharks hung around for a while; sometimes, they took the chum and swam! 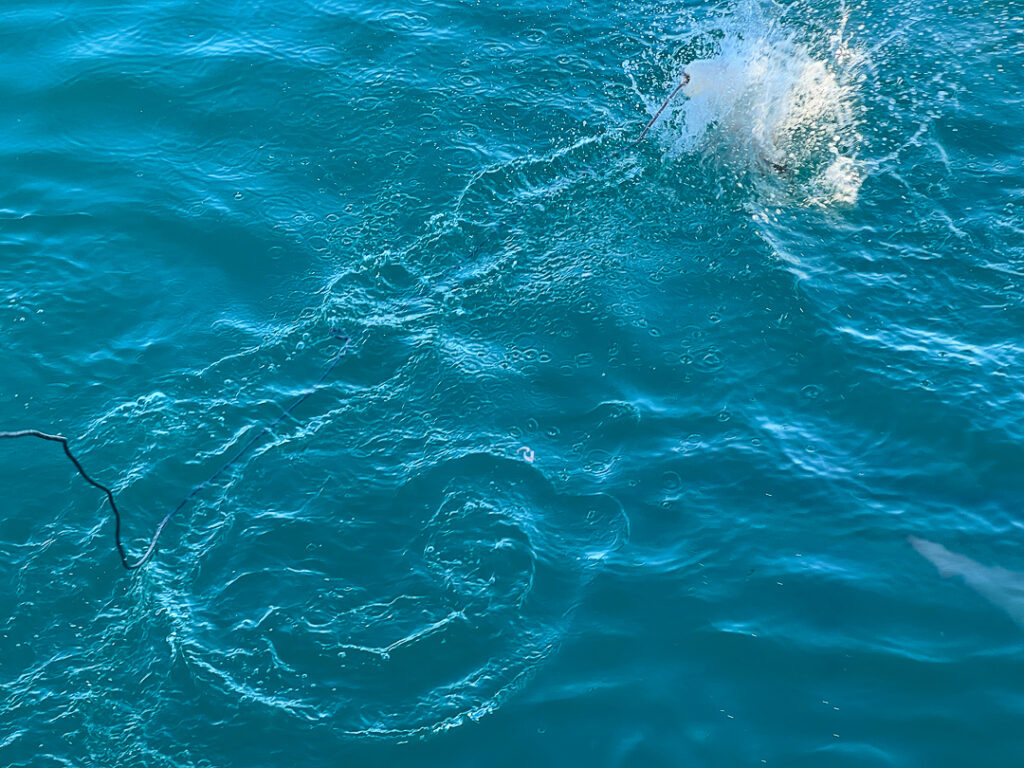 We didn’t see any great whites today, only Bronze Whalers. It was still exciting! 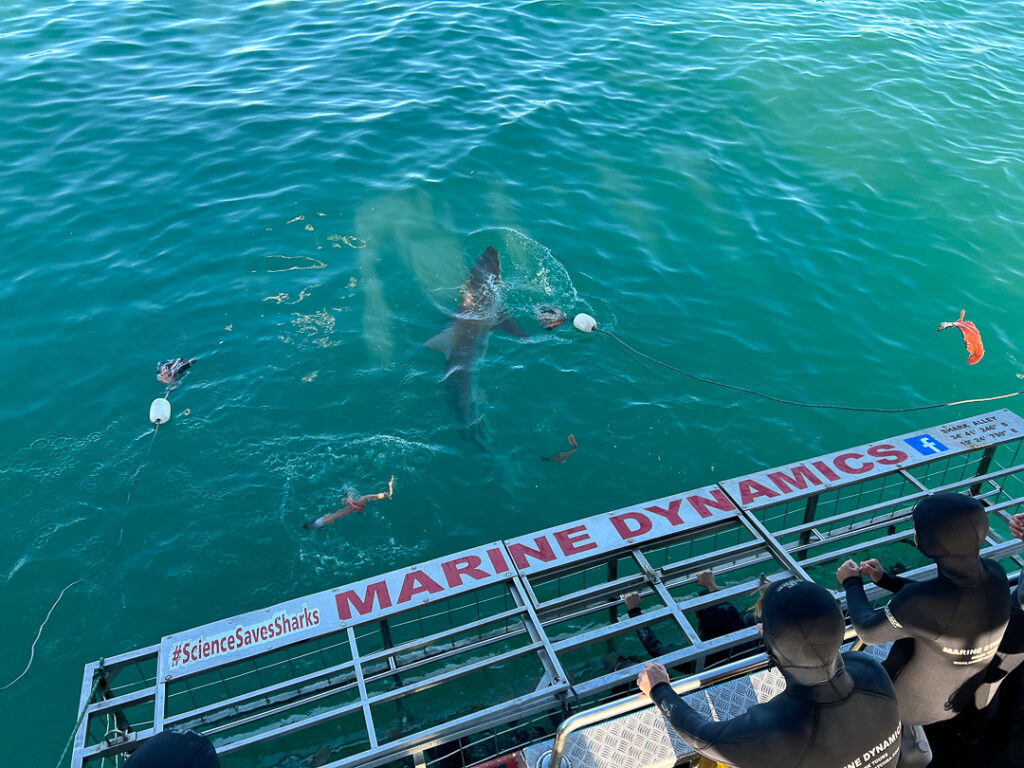 I was in the second group in the cage – it was COLD! Whenever a shark neared, the crew would tell us “down” and “left”, “right”, or “center” – we were supposed to pull ourselves down (we had weights on) and look in the appropriate direction to see the shark better. I found I could see more from the surface!

After everyone had had their turn in the cage, it was time to go ashore. The tides had gone out, so we couldn’t go back to Kleinbaai Harbour; instead, the ship sailed for about half an hour, passing Danger Point and the Danger Point Lighthouse. The guide told us that many ships had sunk there, including the HMS Birkenhead, which was the first ship to issue the call “Women and Children First!” 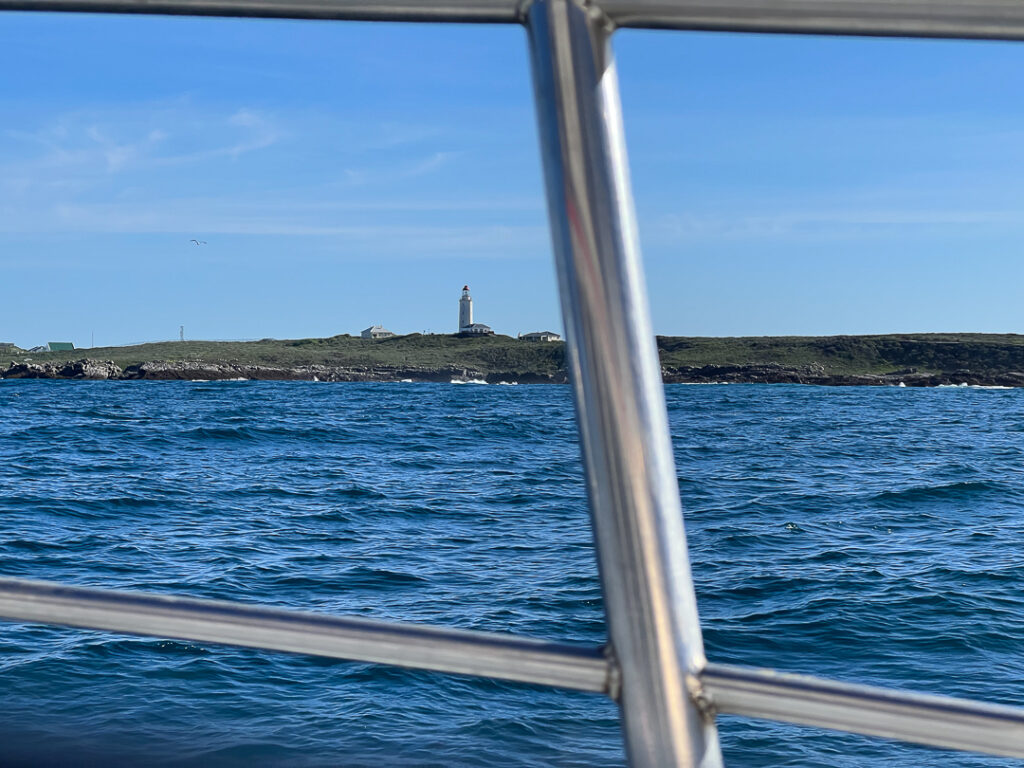 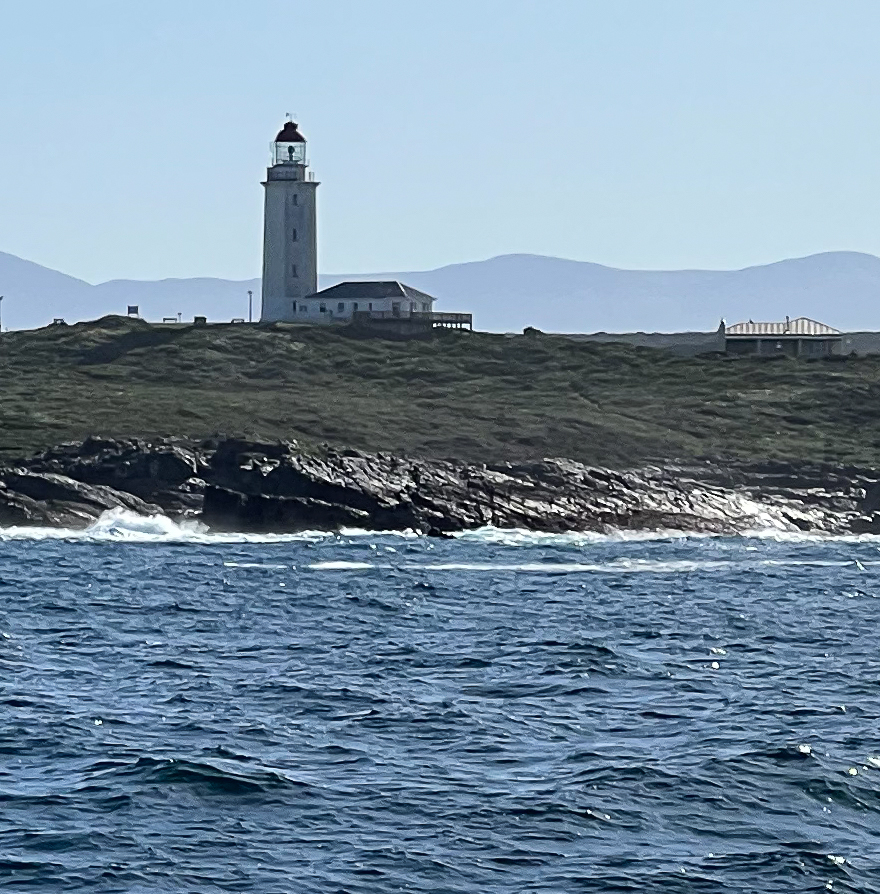 We left the Slashfin and boarded buses to return to The Great White House for some much-needed soup and bread. 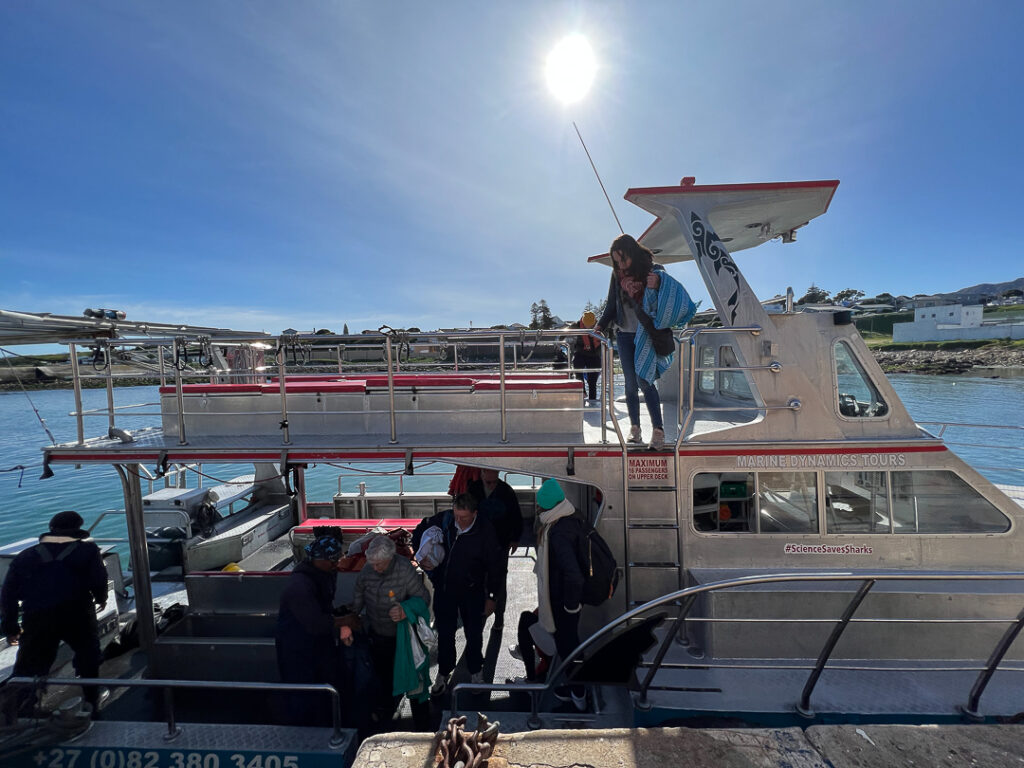 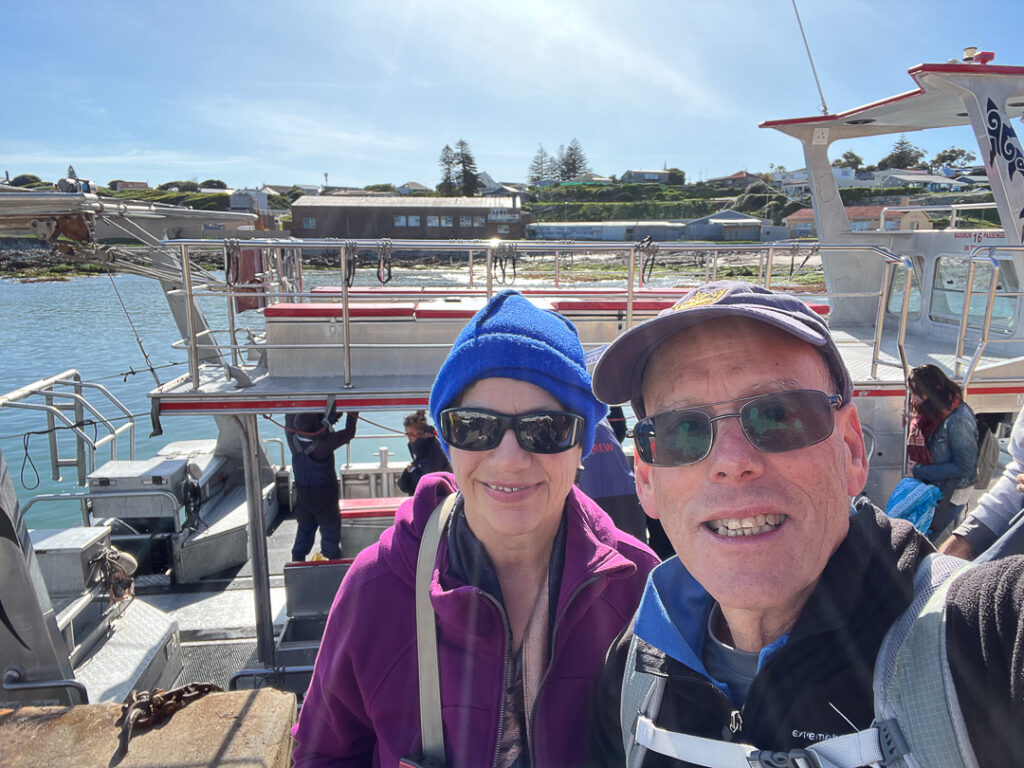 After being fed, debriefed about the trip, and asked for quotes for their blog, we returned to our bus for the trip back to Cape Town. But there were more surprises in store, starting with a visit to the nearby African Penguin and Seabird Sanctuary. 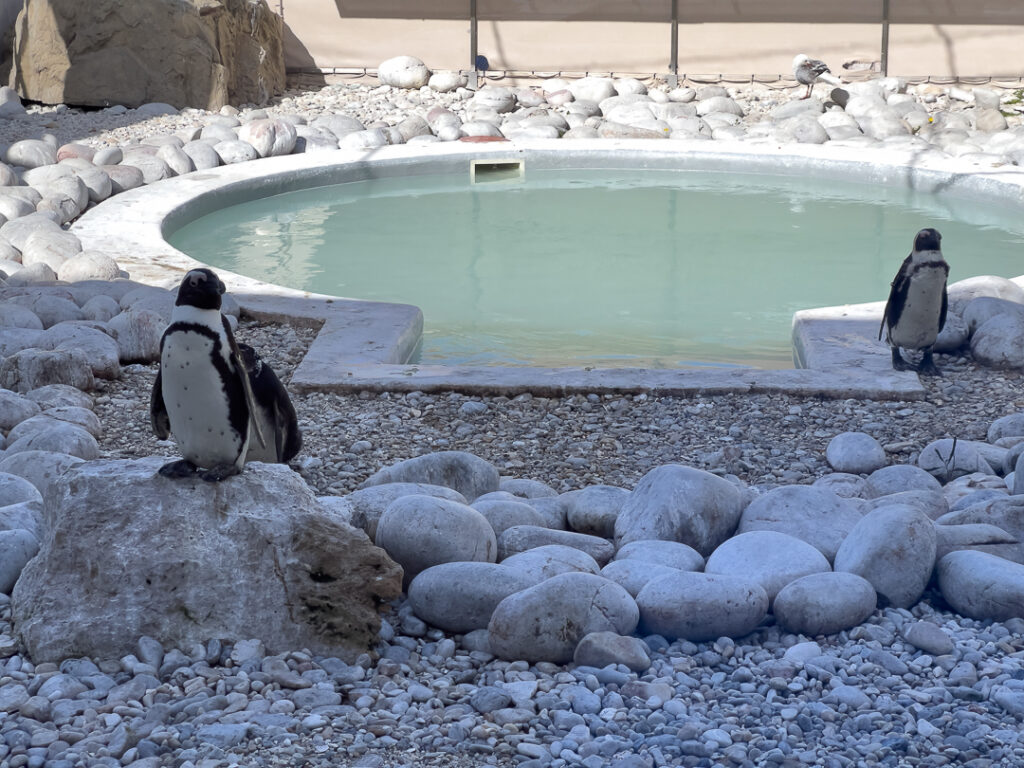 One last surprise awaited – a stop at Sievers Point in Hermanus to do a little whale watching. I hadn’t brought my Lumix, and the iPhone could only resolve a hint of a whale, but it was a nice place to take a photo anyway. 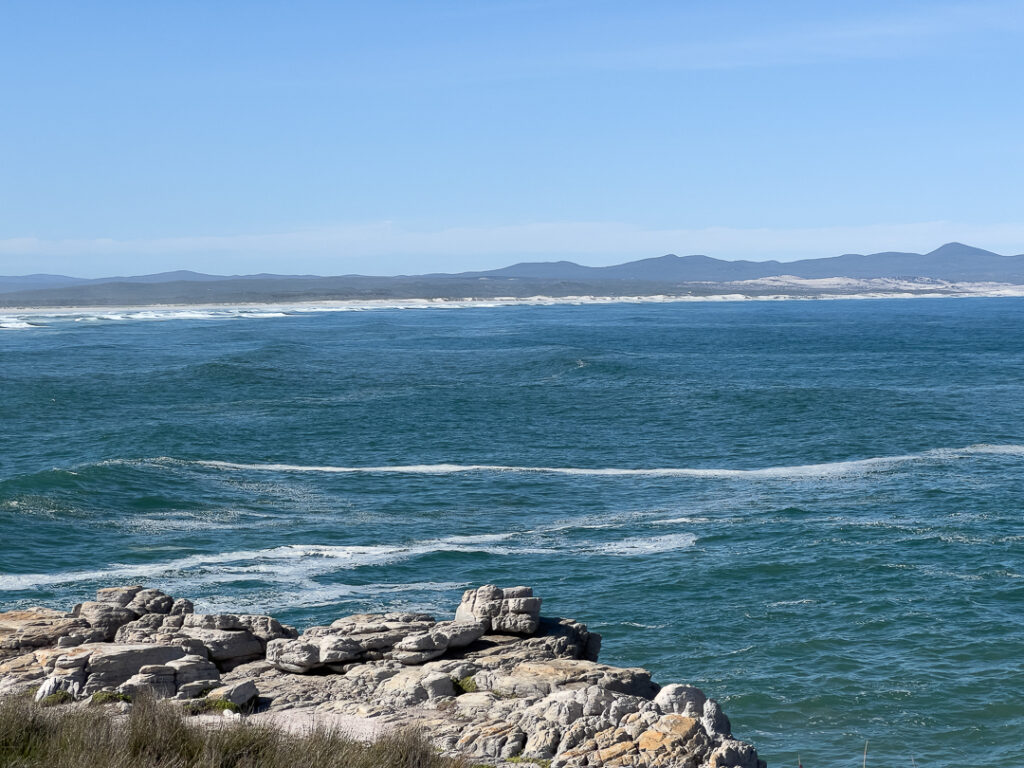 And finally, we were back in Camps Bay with nothing to do for a little while – so we took a walk down to the beach. On the way, we passed the town’s memorial to the Great War. 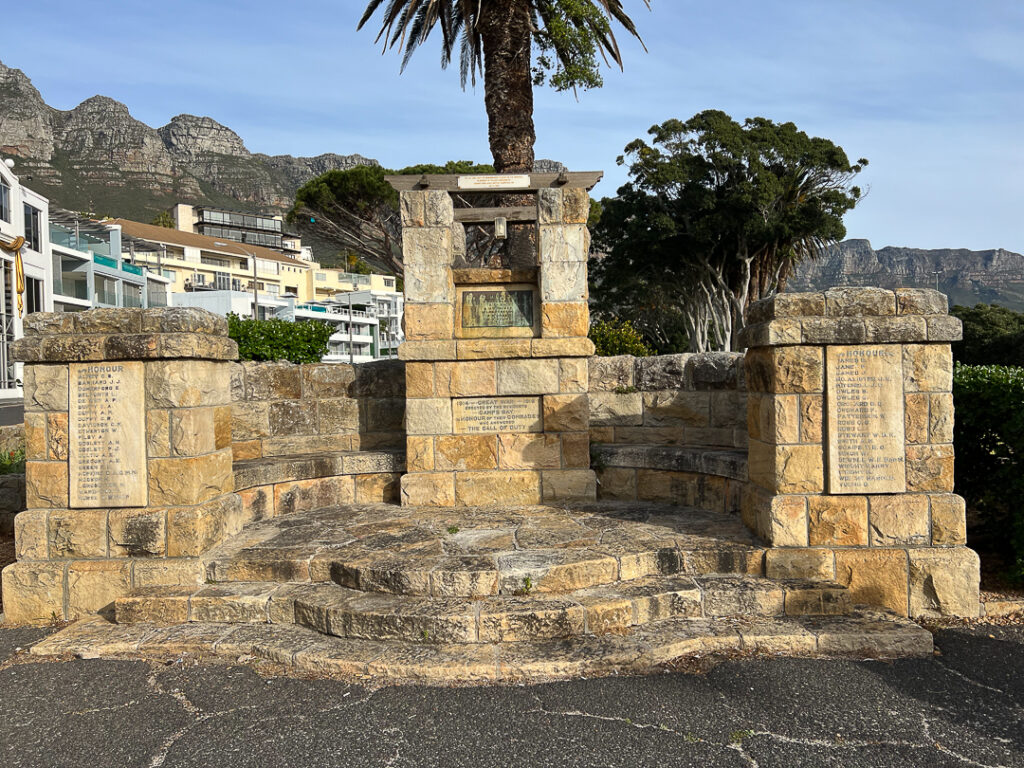 We’d seen sand sculptures on the beach on our way back to the hotel, so we walked over to one; the artist was there and explained that the project wasn’t officially-sponsored (which might explain the tip box to the left of the sculpture). I was happy to contribute. 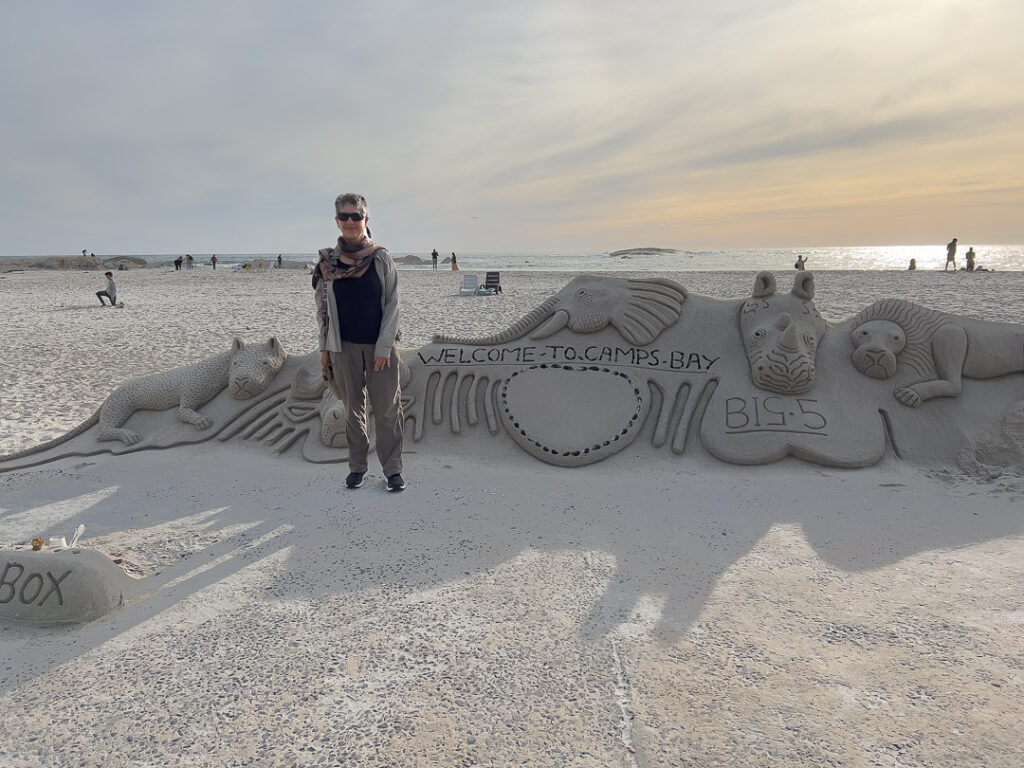 And now we really can relax for the day – it was a long trip, but a lot of fun!