I started this morning with a trip to the Toyota dealer — both Priuses needed regular service (oil change) as well as the “60C Special Service Campaign” (aka the steering-shaft recall). I’d called yesterday to make appointments, and the service writer I talked with said to bring in one car this morning and they’d do the oil change and handle the recall; then I could swap cars in the afternoon and they’d do the other one the next day (in the meantime, I’d have one of their cars).

But I had an inspiration — if I was quick, maybe they could do both cars in one day. So I dashed out of the house bright and early and got to the dealer well before 8. I got a different guy as the service writer, and when I told him what I wanted to do, he asked me, “why do you think we can do the recall today?” Apparently there are two different shafts for the Prius, and some cars need one and some need the other, and they didn’t have both in stock.

In fact, they didn’t have any shafts on hand, so it didn’t matter which one I needed. But they did check to see which one, and they claim they’ll order it and notify me when it arrives.

But I still had to get the oil changed, so I waited while they did that — then I went home and repeated the drill with the other car. Fortunately, they have wi-fi, so I was able to work while I waited, but I’d really rather have been able to finish the process instead of having to wait for the shaft.

For years, I’ve kept track of the mileage I get at every fill-up, with the thought that if it changes significantly, it might mean problems with the car. But I’ve never bothered to look at the mileage closely, until today.

I was curious about the mileage I got on the trip to Tucson, and whether it was significantly different than the mileage I get in normal driving. So I brought in my logbook and started entering data; when I finished, I’d discovered that my cumulative average mileage had been very close to 45mpg since my second fill-up, even though the individual fill-ups gave me very irregular results (especially the one where the automatic shutoff on the pump didn’t work and I pumped 11 gallons, some of which went outside the car instead of in the tank!). 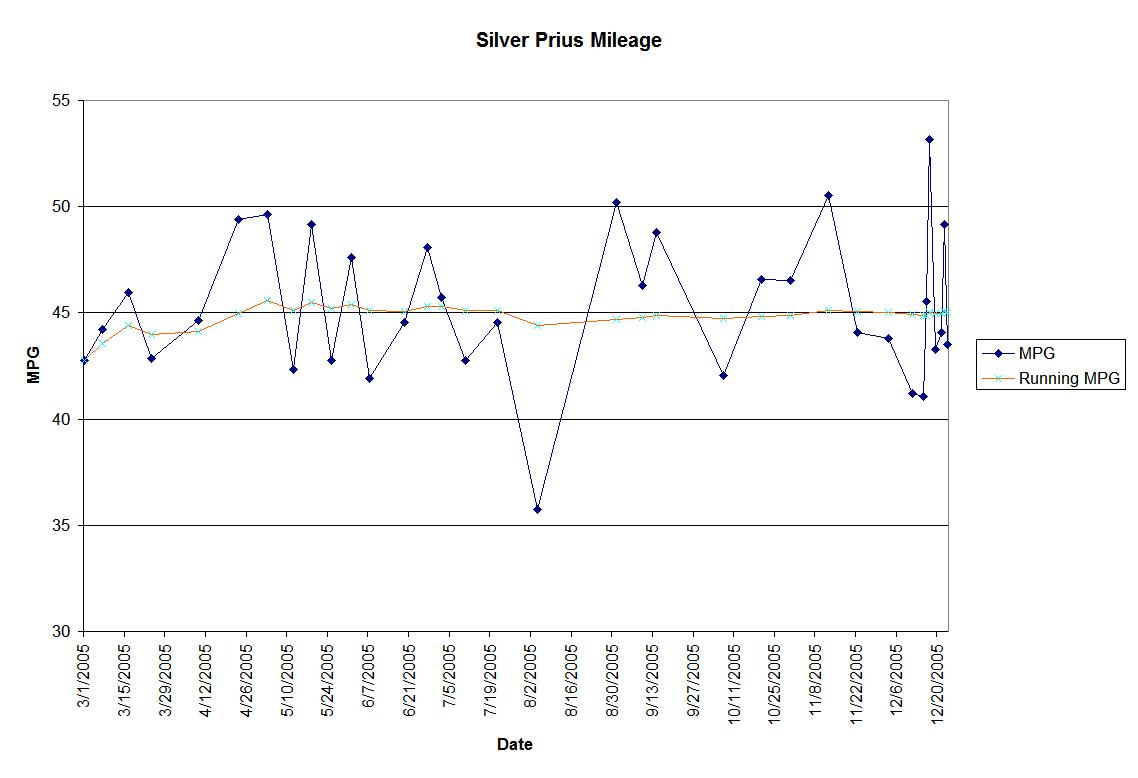 The average mileage for the Tucson trip, 45.9 mpg, was slightly higher than my long-term average of 45.0 mpg, but not by a lot. On the other hand, my average speed on the Tucson trip was undoubtedly significantly higher than my normal speed — most of the distance was on roads with 70 or 75 mph limits, and we spent a lot of time at or above 80 mph (just keeping up with traffic, of course). Around here, the limit is 65, and traffic usually moves about 70. 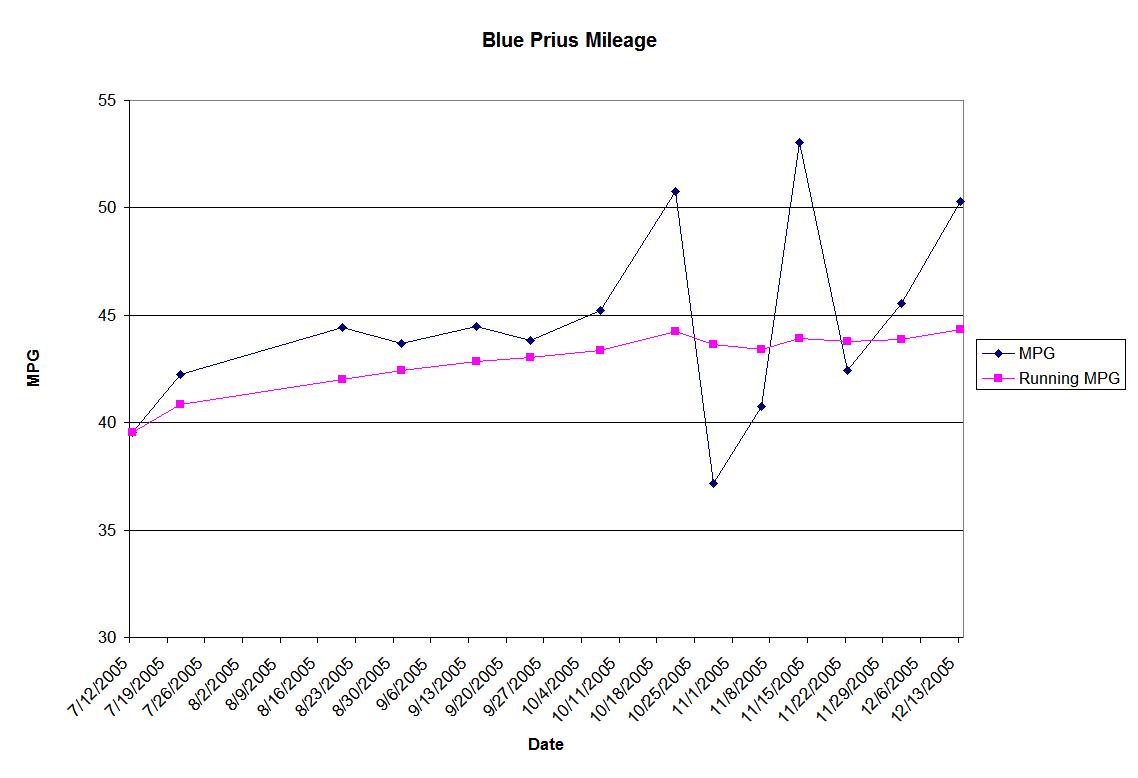 Naturally, neither of these numbers comes close to the EPA figure of 60 city, 51 highway, 55 combined, but they are much better than the 20mpg or so I was getting from the Saab most of the time!

I spent this morning at the winter Congregational Meeting at Shir Hadash. I probably didn’t pay as much attention to the meeting as I might have, because I kept looking at my watch and thinking, “I should be installing my XM radio while it’s still daylight”. Eventually, the meeting ended, and, after a fairly quick lunch, I was home and ready to begin.

A friend had volunteered to help me, but I decided not to wait for him to arrive; I started the project at about 1:30. By the time he arrived, I had gotten through the initial disassembly in the simpler procedure I’d found on PriusChat, but I still hadn’t had to use a tool other than my own hands. And I hadn’t done anything which felt dangerous.

That didn’t last long; the next step in the procedure called for unscrewing a junction box — one with a bunch of wires and connectors coming into it. But it wasn’t very difficult, and in just a few more minutes, I’d plugged the XM tuner into the radio and had the preview channel up and running. Unfortunately, the tuner and antenna were sitting on the driveway, which would have prevented me from taking the car anywhere, so I had to continue, this time from the Prius XM instructions and DVD.

The rest of the steps involved running a cable under doorsills to the back of the car, moving some carpets, and running the antenna cables through the hatch opening and mounting the antenna on the roof. None of the steps were really very difficult, though it was very good to have another set of eyes involved, and, at times, an extra hand (especially when fishing cables to the back of the car). And pulling weatherstripping out of the way bothered me a bit, but only a bit.

We finished before 4:30 and I called XM to activate the radio and, as long as I was at it, turn off the XM PCR I hadn’t used for a few months (time to list it on eBay!). By 4:45, the radio was activated, and I was finished. And there were still a few minutes of daylight left.

The DVD was invaluable — especially when there were spots where the printed instructions weren’t quite clear enough, or when things didn’t seem to fit together quite correctly or come apart easily, watching someone go through the steps was enormously reassuring. It is, however, startling to see how much of the car is held together by clips and friction!

Thanks, Sam, for helping; your turn next!

I picked up Diane’s Prius this afternoon; with luck, I won’t be back to the dealer until it’s time for regular service again. I hope.

They had to replace the torque sensors and the steering rack; the service advisor said it was the first time they’d seen such a problem at the dealership. Gosh, how lucky can we get?

On a lighter note, Jeff had his first fencing lesson tonight — he enjoyed it. I enjoyed watching it, and might consider giving it a try sometime in the future.

The Toyota dealer just called; they have the last part and are actually finishing up the car today. But they weren’t sure that they could be finished in time for me to pick it up by closing at 6, and I’d still have to deal with the rental car on Tuesday. So I told them to take their time and plan for a Tuesday pickup.

Diane wasn’t thrilled by having to wait until Tuesday to drive her car, though!