When I was a kid, our elementary school library had a book of puzzles, one of which is pictured above. The book claimed that if you look quickly at the picture, you’ll read it as “Paris in the spring” — if you did, take a closer look (and let me know that it worked!).

Well, it’s spring, and I’m in Paris — but the weather is not the stuff of legend — or maybe it is, but not the kind of legend I like telling.

My flight to Charles de Gaulle airport left late and arrived late (like almost every flight I take these days, now that I think of it), but was basically pleasant — even though we were only in the air for 40 minutes, they managed to feed us our choice of sandwiches, unlike US airlines, which have given up on food for flights of under 2 hours or flights which don’t take off or land when they think people should be hungry. The delay was due to weather, which should have made me think — but it didn’t, so I decided to save the company some money and take the RoissyBus into town (48 francs, about $7, instead of 250-300 francs for a taxi); I knew my hotel was only a few hundred meters from the end of the bus ride and I didn’t expect to have any trouble finding it.

And finding the hotel was easy, and it was only a ten-minute walk — but by the time I got there, I was drenched, because a weather system caught up with us, and it was pouring down rain. I managed to register (it’s not easy when you can’t read the form because your glasses are wet, and when you drip all over the form when you try to sign it) and went up to the room to dry off. A few minutes later, I felt far better, and the rain had stopped, so I went out to look around and have a bite of lunch (the sandwich on the plane wasn’t very filling, but it was better than peanuts). I also splurged and spent 35 francs ($5) on an umbrella, since the day was rather gloomy.

It was late enough in the day by this point that I didn’t think it was worth going to any museums, but I definitely wanted to be out rather than spending the afternoon in my hotel room, so I decided to do a favor for a friend and take a picture of the hotel he’ll be staying at in June, the Hotel de Trois Colleges near the Pantheon. Actually, I took six pictures, but I won’t post any of them here — but I did take a picture of the Pantheon as long as I was in the neighborhood.

Ever since my first trip to Paris, a few years ago, I’ve liked wandering around the city — it’s just a wonderful city to walk through. Everywhere you turn, there’s another typically Parisian scene, like this one on the Rue Lagrange (in the 6th, just a few blocks from Notre Dame). 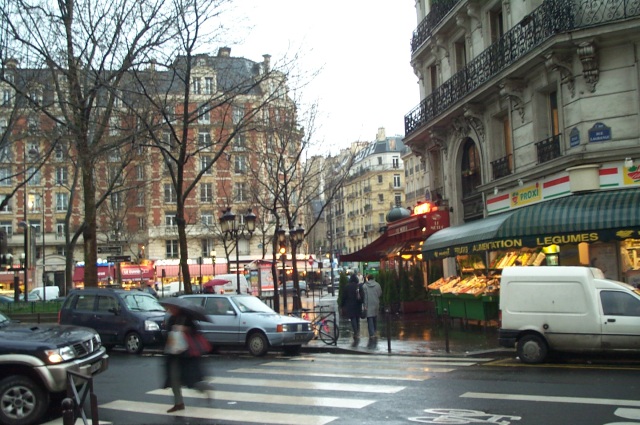 By this time, it was drizzling again — which seems to have been very typical this year. The Seine is very wide and high (not to mention brown and fast-flowing); it’s so full, in fact, that there’s no sidewalk by the sightseeing boats.

And at other places, you can see that the river has taken out the paths which are normally a pleasant place to walk. 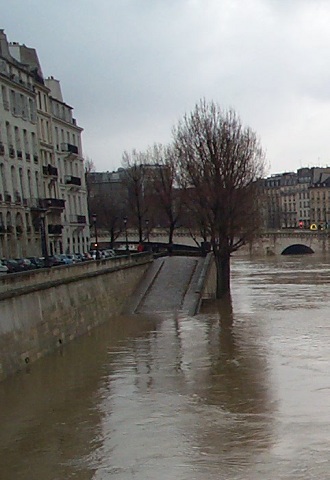 Buildings near the river’s edge are in trouble, too.

I wanted to visit the Musee de la Deportation, which commemorates the Jews (and others) who were sent from France to concentration camps, mostly to be killed by the Nazis. The museum is just across the street from Notre Dame, descending from street level down to river level, but the flooding meant that it was off limits.

By this time, I was just across from Ile St. Louis, which houses one of the best ice cream makers in the world, Bertillion; I wanted to eat before having my ice cream, so I set off in search of a restaurant (not a difficult task in Paris!). I intended to follow Tim Bray’s rule — find a busy restaurant on a busy corner and the odds are with you — but I didn’t see anything I wanted to eat at the first few places, so I kept walking. And then the rain started. My umbrella kept me dry, or so I thought — but then the wind blew my pants up against my legs and I realized that I was soaked from the knees down. So I dashed into the next restaurant I saw and got the last table in the place.

The food was good, and they happened to sell Bertillion ice cream and sorbet, so I was happy and well-filled by the time the rain diminished enough to leave. I walked to the nearest Metro station and hopped a train towards my hotel. But I got off a stop too early and wandered around some more, first through Galleries Lafayette (entering that store 15 minutes before closing is a frustrating experience, but I guess it saved me money!), and then somewhat randomly around the area. In the process, I found an area with many kosher restaurants, but, of course, they were closed because it was still Shabbat. After a while, though, I decided I was ready to go back to the hotel and take off my wet clothes, so I took out my GPS and discovered that it’s very hard to see view of enough of the sky in Paris to get a position — but eventually, I figured out what direction I had to go in to find my hotel, and here I am.

I haven’t had the courage to check the weather forecast for tomorrow. Whatever it is, I’ll be out in it!

On Thursday, I wrote about how Israelis didn’t seem to be letting the “situation” affect their lives too much and wondered how that reaction compared to what foot-and-mouth was doing to the English. I’d have to say that foot-and-mouth is having a much more significant effect — for example, the road into IBM had straw on it — straw with antibiotics, to kill any germs that might be on tires on cars driving in and out of the property (IBM Hursley is in a rural area). And there was a scare a week ago, where it looked as though foot-and-mouth had been detected nearby; if that had happened, no one would have been allowed in or out of the area, and IBM Hursley might have had to close down for a while.

There were also ads in the newspaper and on the radio telling people that the countryside was not completely closed for visiting, and giving a phone number to call for details — but many activities have been cancelled.

At the airport, every shop selling food had a sign informing customers that it was now illegal to take milk, meat, milk products, or meat products out of the country (even to eat on one’s flight), and that some countries (including the US) were banning the import of British milk chocolate.

In France, there were a few signs asking people who’d been on a farm to report to Customs to have their shoes disinfected and to stay off of farms in France, but there wasn’t any strong effort made to check, or even to make sure that incoming passengers read the signs — certainly, the person who glanced at my passport didn’t say anything to me (literally! Nor did he stamp my passport, but that’s fine; I already have a French stamp and I’m running out of room anyway), and I doubt I was alone in being ignored.

But when I looked at the 8pm French news, I could tell that foot-and-mouth was the lead story here, too. I just couldn’t tell if they were talking about the outbreak in England or cases on the Continent.

One thought on “Paris in the rain”