Of course I mean eating and walking. If I weren’t here by myself, there would be at least one other thing to add to the list, but I am, more’s the pity — c’est la vie.

Last night, after buttoning up the computer, I realized I was slightly hungry, so I left my hotel, turned left down the Boulevard Haussmann and continued on as it turned into Boulevard Montmartre, eventually deciding to turn around just before reaching Place de la République. I spotted a creperie and got a crepe with marmalade to go, then took the Metro back to the hotel. One of the things I really enjoy about Paris is being able to take a nice walk and have a nice snack at 11pm — or even later, if I only had the energy.

This morning dawned early, and only slightly wet. The Louvre and Musee de Orsay had been closed yesterday due to a strike, and no one knew if they’d be open today (the hotel called and got no answer, but they weren’t sure if it was because of the strike, the time change, or both). I didn’t want to waste my only full free day hoping to find an open museum, so I decided to see if I could make the Paris Walks tour of Montmartre that the Mercury News had so kindly written about last Sunday. The article had omitted small details, like the time of the tour, but they gave the phone number (+33 1 48 09 21 40). The person who answered the phone didn’t bother saying “bonjour” — their clientele speaks English, and so do they. As it happened, I had about a half-hour before the tour, so I dashed to the Metro and made it to the Abbesses stop with ten minutes to spare.

Our guide, Iris, came from the Bronx and had been in Paris for about three years, with no plans to leave. She took us on a two-hour walk through Montmartre, mostly up! Unfortunately, it was cold and raining the entire time (and I’d forgotten to bring my sweater), so I wasn’t able to take as many pictures as I’d’ve liked to (those of you reading this page on a dial-up connection may be grateful).

We started by talking about the history of the district (even though there are churches in the area dating to the 12th Century, Montmartre wasn’t annexed to Paris until about 1860), then walked along Rue des Abbesses, where we stopped near the house where Van Gogh lived with his brother. I couldn’t get a picture of that house, but one of his neighbors was Toulouse Lautrec, who worked in a house about two blocks away (Lautrec’s house is the one behind the traffic light, with the “D”-shaped top window and the very large window beneath that): 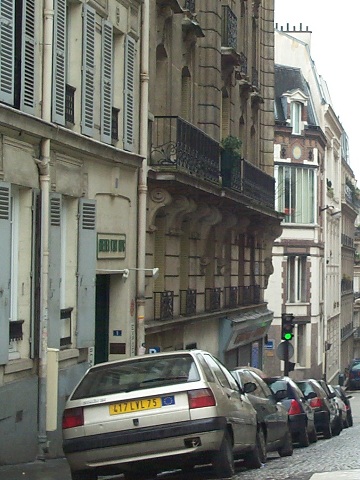 We continued on our way towards Sacre-Coeur, with many stops along the way; at one, Iris told us the story behind this picture: 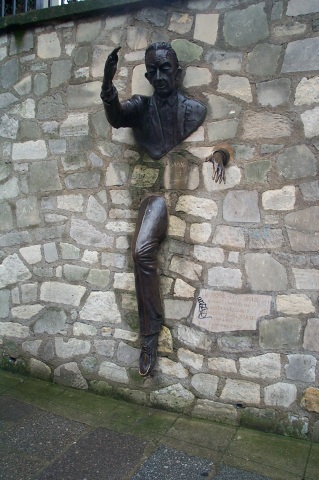 The statue, at Place Marcel Aymé, is based on a story by Marcel Aymé about a mild-mannered man who discovers that he can walk through walls. Eventually, he builds a life of crime on this talent, uses it to escape from prison, finds a lover whose husband locks her in a room with no windows every night (no problem for this guy!), but then loses his power while leaving her one night.

Our tour ended at Sacre-Coeur; most of the way, we’d been by ourselves, but here we returned to Tourist Paris, loaded with postcard vendors and overpriced restaurants. The view was good, but I bet it’s spectacular on a clear day. 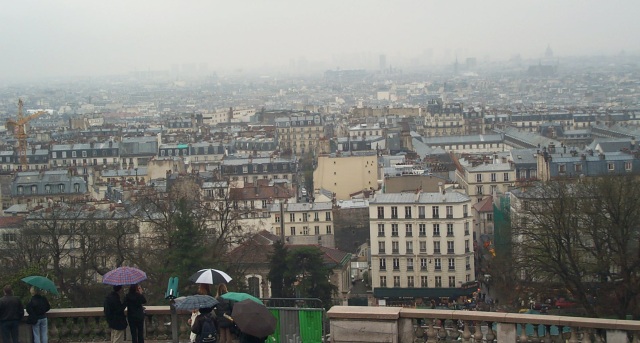 The Mercury News article recommended spending the rest of the day wandering around Montmartre on your own, and even suggested a few cafés to try, but I was cold and wanted to go back to the hotel.

Once there, I grabbed my sweater and set out again; after a quick lunch (how un-Parisian of me!), I joined my second Paris Walks tour of the day, this one through the Marais.

The Marais is one of the oldest sections of Paris; the name means “swamp”, but it’s been drained for centuries. And it’s the heart of Paris’s Jewish community. 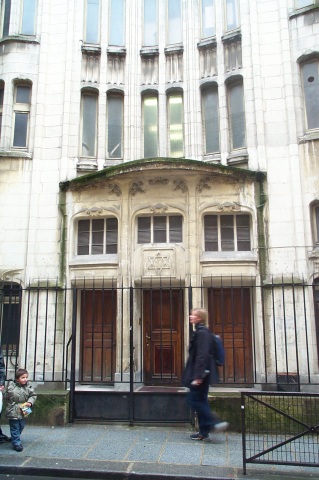 This is the Synagogue de Rue Pavee (this was the first paved street in the Marais, hence the name). It was built in 1913 to handle the influx of Polish Jews fleeing the pogroms; after World War II, the congregation was replentished with Sephardic Jews from the former French colonies in North Africa.

Hector Guimard was the architect; he is probably more famous for having been the man who designed many of the original Metro stations. 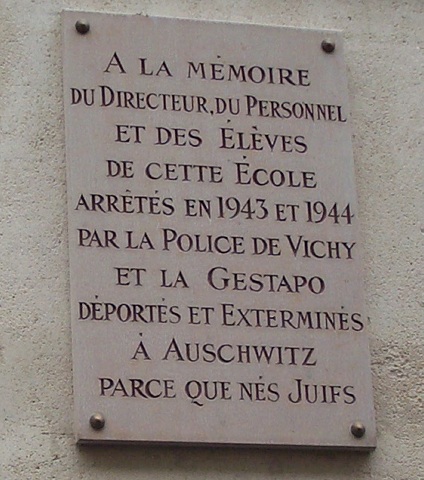 During World War II, the Nazis attempted to exterminate the Jews in the territory they controlled, and the Vichy government, which controlled Paris, cooperated in that attempt. This plaque is on the wall of the Ecole des Travail, in memory of the director, staff, and students of the school, all of whom were sent to Auschwitz where they were killed. 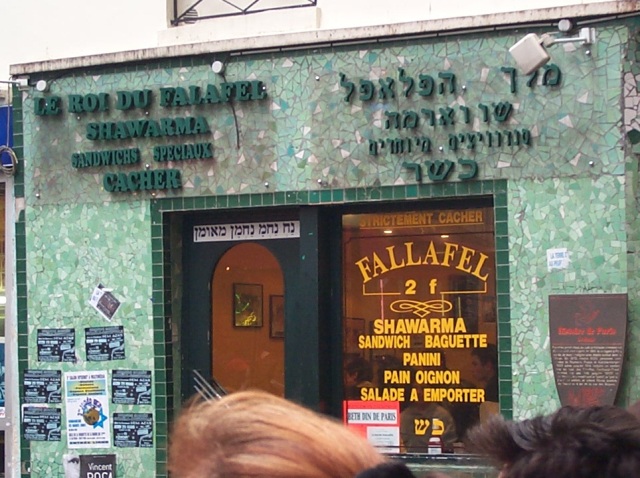 But, though the Nazis killed six million Jews, they failed to exterminate us, and there is now a large, vibrant Jewish community in Paris. Falafel and shwarma probably weren’t common before the war, but they are now, and seeing this shop gave me a pretty good idea of what I was going to have for dinner (though I wound up eating across the street at L’As du Fallafel).

There are Kosher (err…Cacher) restaurants representing many cuisines in the area; I saw sushi, pizza, and steak, to name but three. And, of course, there’s New York style deli; this restaurant, Jo Goldenberg’s, isn’t actually Kosher, but it’s noteworthy because it was the site of a bombing in the 1980s. You can see a memorial to the victims, including newspaper articles about the bombing, on the rightmost portion of the left-hand wall, just to the left of the center of the picture. 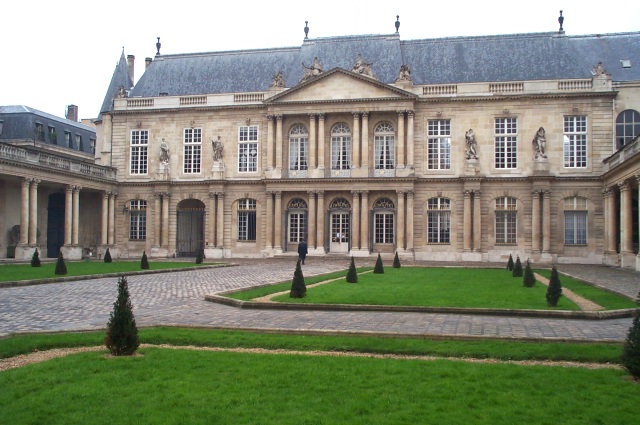 There’s more to the Marais than the Jewish community, and we continued onward to look at some of the old mansions which have survived (many have had their courtyards filled in and been converted to apartments, stores, and the like). The Hotel des Sorbes (I may have misspelled that) is now part of the National Archives; it was owned by one of Louis XIV’s official mistresses. 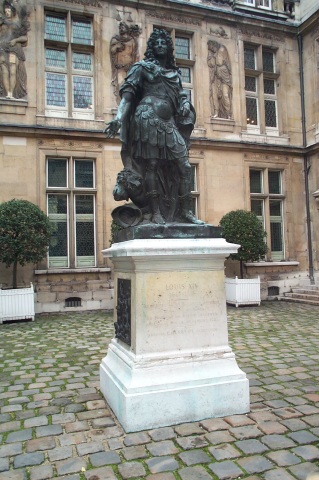 Only one statue of Louis XIV survived the French Revolution; it’s now in the Museum of the City of Paris.

Our tour ended at the Place de Vosges, a huge square dating back to Henri II (or before). I took pictures, but they don’t do it justice.

If you’re going to be in Paris, I highly recommend Paris Walks; they offer many more tours than the two I took, and I wish I could take some more on this trip.

After the tour, I visited some of the Judaica shops (I saw more Judaica in the Marais than I did on my trip to Israel last week; of course, I also spent more time touring this afternoon than I did during my entire trip to Israel) and picked up a Matzah platter (inscribed in Hebrew, of course) and had dinner. I tried to visit the Jewish Museum, but there were only 15 minutes before closing and they wouldn’t let me in, so I went back to my hotel.

Daylight Savings Time started here this morning, and it felt too early to give up and do e-mail, so I decided to do one traditional tourist thing and visit the Eiffel Tower.

The last time I was here, the front of the tower was adorned with a giant countdown to the year 2000; fortunately, that particular problem is behind us, and I was curious to see what the tower looked like without the timer, so I took the Metro to the Trocadero to take advantage of the view of the tower from across the Seine: 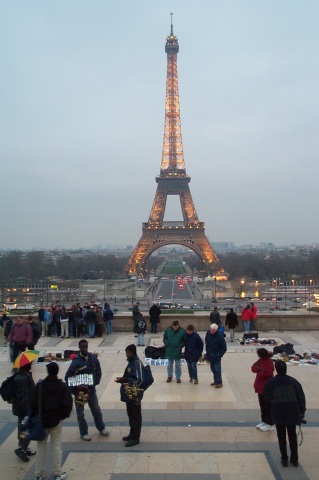 But some unsung genius, probably in the city government, decided that the Eiffel Tower wasn’t beautiful enough as it was. So they affixed a bunch of strobe lights which started flashing on and off in random patterns shortly before 8pm, like this: 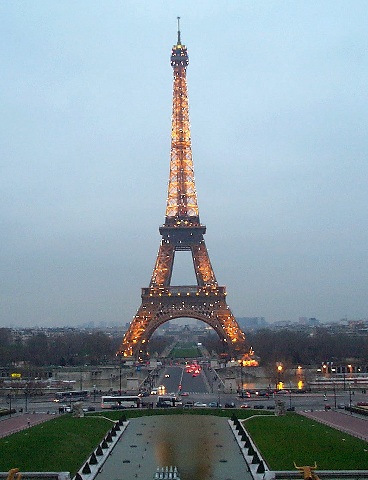 No one asked me, but I don’t think the tower needed improving — and they didn’t succeed, either.

I didn’t come to Paris to play tourist; I’m here for two days of internal IBM meetings out at La Defense. I’d like to blow them off and tour some more, but I’d probably be found out (hi, boss!), but I hope to do a little sightseeing in the evenings after the meetings end. If I can stay awake, that is — we’re starting awfully early, and I have a feeling the room is going to be hot, stuffy, and full. At least it’ll be a non-smoking hot, stuffy, and full room.

Though I have to admit, I’ve been pleasantly surprised by how well Parisians honor no-smoking signs. Why, I haven’t seen anyone smoking within nearly a foot of any of the signs I’ve seen!

And on that note, it’s time for bed…or maybe to go out for a snack. It’s only 11pm, so the evening’s still young!

One thought on “Two great things to do in Paris”