This morning, we awoke early so that we could check out of the hotel and be at Paddington Station by 9am to meet today’s London Walks guide, Richard. We succeeded better than we’d hoped — we were at the station well before 8:30, so we wandered around for a while. I’d already done the geocache in the station, but Jeff and Diane took advantage of the opportunity to log it. 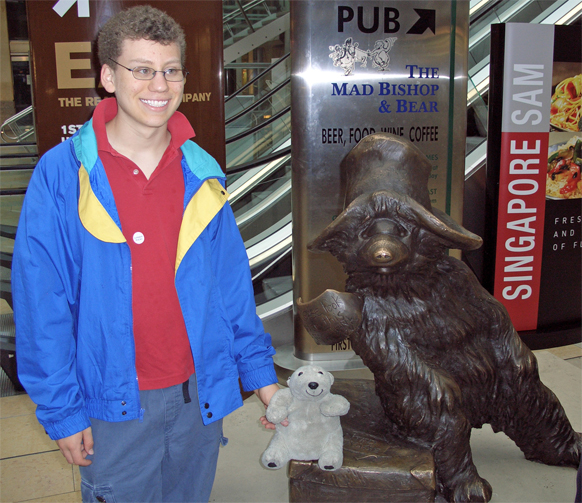 Eventually, we found the group gathering for today’s Explorer Walk to Bath, gave Richard our money, and boarded the train. (London Walks must get very good discounts from the train company — today’s tour, including the walk, admission fees, and round-trip train travel, cost us just a couple of pounds more than I’d expected to pay for a one-way ticket.)

The trip to Bath was uneventful — it was very nice not to hear anti-terrorism reminders after spending three days using the Tube, and we arrived in Bath just a few minutes late. I’d phoned our host for the night from the train, and he was waiting to take our luggage up to the B&B, so I didn’t have to miss any of the tour.

We left the train station and walked over to the nearby canal, where our guide told us about the history of Bath and of the canal system (as it happened, we’d be on this particular canal later in our trip, but many miles away). 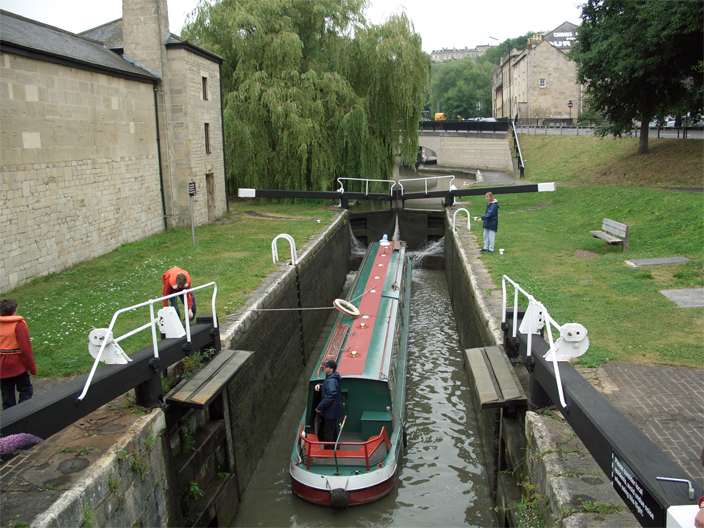 From there, we entered “New Town”, where Bath expanded after it had gone as far uphill as people were willing to walk — but it was on the wrong side of the River Avon, so it never became as fashionable as the other part of town. The connection to the old part of town was via the Pulteney Bridge, which was modelled after the Ponte Vecchio in Florence. 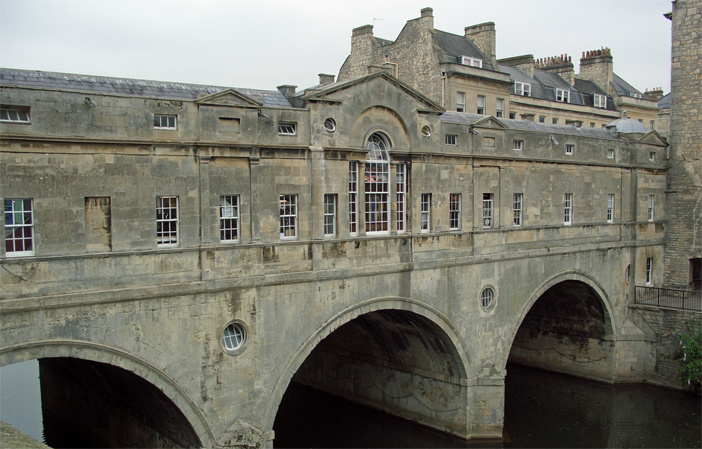 We crossed the bridge to the “nice” side, only to be confronted with that most fashionable of vehicles, a Trabant. 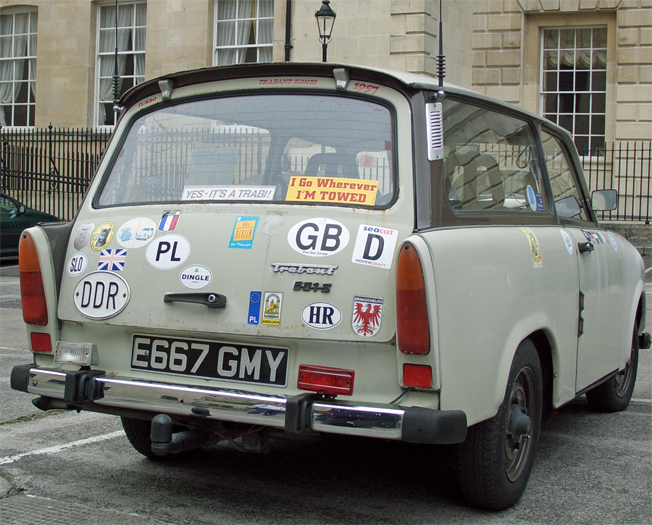 We escaped via the Guildhall Markets (buying nothing), and explored the downtown area and the theatre district, finishing the morning just outside the baths themselves, with a number of recommendations for lunch and plans to meet just before 2pm for a visit to Bath Abbey.

We had lunch at Cafe du Globe, which had an interesting menu and was reasonably tasty (some of the pubs looked interesting, too, but we didn’t see any which clearly catered to non-smokers). We then reunited with our group just outside Bath Abbey for the afternoon walk.

There’s an organ concert every Wednesday afternoon, but it ended just before we went in; we were there, however, in time for the hourly prayer led by one of the Abbey’s clergy. After that, Richard guided us to some of the interesting sites in the Abbey, 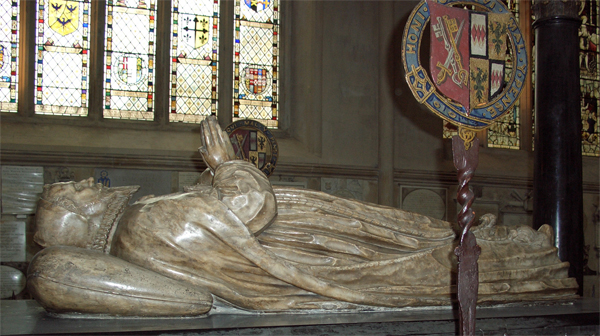 and then it was up to the fancy part of town, beginning with a visit to the Assembly Rooms (where photography was not permitted), followed by a trip to The Circus, and finally a visit to the Royal Crescent.

From there, it was all downhill to the Roman Baths themselves. 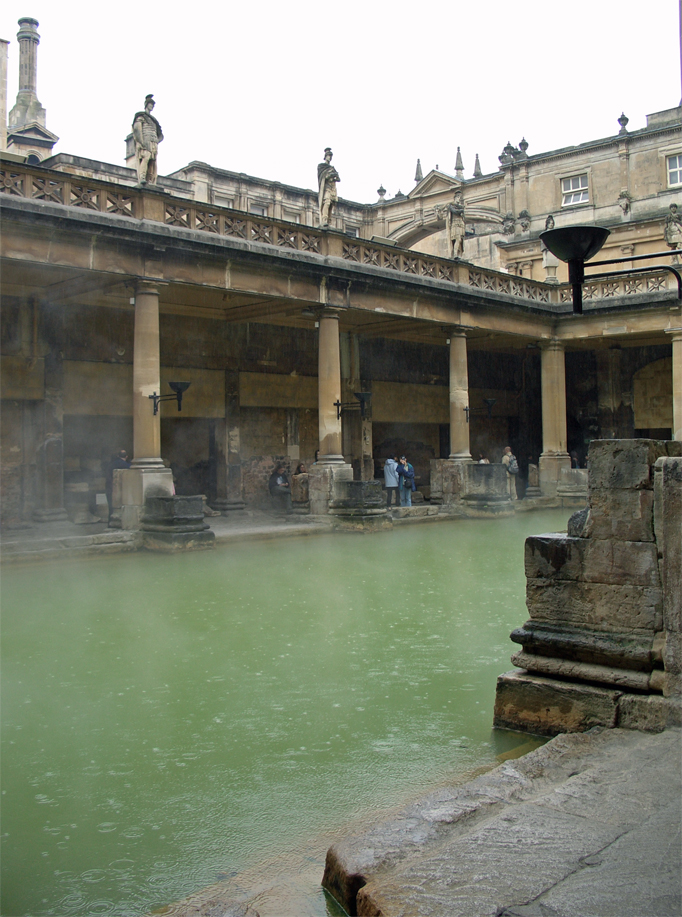 We left the group there — they returned to London, I guess, while we walked down to the train station, found the Hertz office, and picked up our vehicle for the next week, a Ford Mondeo 1.8 with manual transmission and air conditioning. I can no longer drive a stick at home, because my right hand has been weakened by too many years of mousing, but in the UK, one shifts left-handed. And since renting an automatic there costs about double what renting a stick costs, I am happy to shift for myself!

We left the car behind and hurried back into town before the stores closed so that we could pick up a current AA Road Atlas and an OS map of the Cotswalds — then it was back to the station to drive the half-mile to the B&B.

The drive would have been better if I’d really known where I was going, but we eventually found the right place, figured out where to park the car, and met Jill and Keith, our hosts for the evening. Our rooms were up two flights of stairs, so they suggested we leave our suitcases in their sitting room and only bring up what we needed for the evening, which made good sense to us.

And then it was off on the great adventure of the evening: laundry. There was a laundrette about a ten-minute walk away, but it closed in 90 minutes; we had to hurry if we were going to have clean clothes.

I’m not a big fan of spending time in laundromats, but this one (the Widcombe Laundrette) was even less pleasant than the average. There wasn’t anywhere to sit, and the machines were iffy — in fact, the first washer we tried ate our £2.50. But eventually, we got the job done and returned to the B&B with clean clothes.

After that, it was a pleasure to walk over the North Parade bridge back into Bath proper for a fine Thai dinner at the Mai Thai Restaurant. We finished the evening with a quick cache, then ran through the raindrops back to the B&B, where we called it a night.