Even though there were several interesting walks on offer from London Walks, we decided to travel independently today. Well, if you want to know the truth, we just didn’t quite make it to any of the walks.

The day started with a knock on the door at 8:12am — it was Jeff, wanting to know if we were ready. His alarm had gone off an hour before. Ours hadn’t. I now understand one more trick about my mobile phone.

So we left the hotel a good bit later than we’d planned, and headed for the Imperial War Museum, located on the former site of Bedlam. 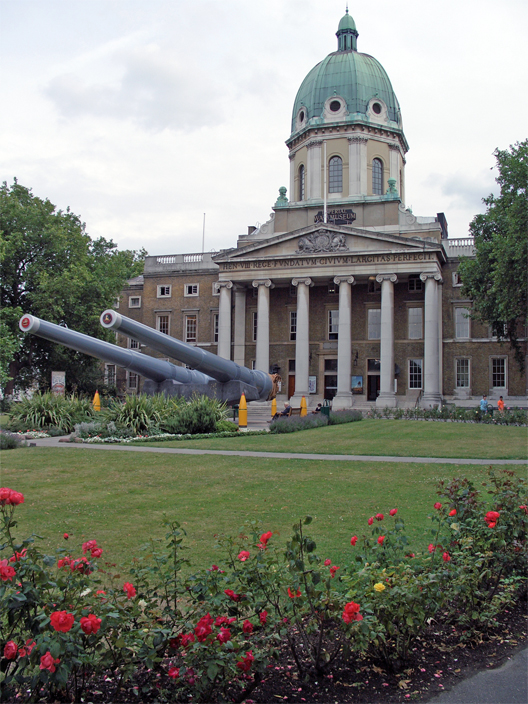 The Rick Steves travel guide said that most people find 90 minutes adequate for the museum; we spent longer than that in the “Secret War” exhibit alone (about MI5, MI6, and related agencies). By the time we finished there, it was already too late to make the Sherlock Holmes walk, so we had lunch at the museum (not bad!), and then we visited the “Children’s War” exhibit (how children in Britain were affected by WWII) and the “Post-1945 Conflicts” section. D-Day beckoned, but we decided we weren’t going to study war no more — at least not today.

By this time, it was nearly 5pm. Fortunately, we knew that the British Library was open late on Tuesdays, so it was back to the Tube and King’s Cross station. We made a brief detour to the mainline station, but though we found Platform 9-3/4, 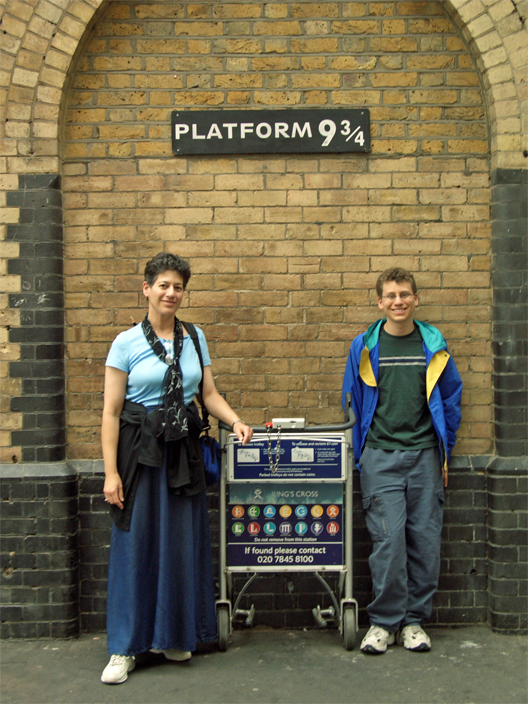 we couldn’t figure out how to get onto the Express. So we walked to the British Library instead, and spent a couple of hours in the “Treasures” exhibit (photos not allowed, more’s the pity!), marvelling at items such as three versions of Magna Carta, a copy of the First Folio, original lyrics from the Beatles, Jane Austin’s writing desk (with the original manuscript of Persuasion on it), and a letter from Sir Isaac Newton. Amazing.

The rest of the evening was an anti-climax; we Tubed back to the hotel, then walked around the neighborhood looking for some ice cream for dessert. We found up having “Chocolate Giant Ice Cream Bars” from the local Marks & Spencer — £1 each, and barely worth it. But definitely better value for money than buying Ben & Jerry’s from the hotel for £5.75 for 500ml!

And now we’ve packed in preparation for tomorrow’s trip to Bath (again, with London Walks, though we won’t return to London with the rest of the tour). I had hoped to be able to leave our luggage at the train station in Bath, but as far as I could find out, there are no left luggage facilities there — or at the bus station. Fortunately, I was able to book us rooms for tomorrow evening at the Holly Villa Guest House (another Rick Steves recommendation); the owner often picks people up at the train station, and offered to pick up our luggage when we arrive so that we can take the tour. After the tour, I’ll pick up a car from Hertz and drive to the Guest House, and we’ll begin the second portion of our trip.