I had set my alarm for 7am, so I wouldn’t sleep away the day, but I wound up waking up on my own a few minutes before the alarm was ready to go off.  The hotel’s breakfast was very good; I had smoked salmon, smoked trout, good bread, a good orange, and even some cereal.  No bagels or cream cheese, though.

I left the hotel about 9am, after checking out and storing my luggage; I wandered over to the Esplanade, and then to the Helsinki Tourist Office, where I discovered that most of the museums were closed because it was Monday.  But I bought a tram pass anyway, and then went to Stockmann, a large department store, where I hoped to find a hat and better gloves than I’d brought with me.  Unsurprisingly, I was successful — and the hat was even 40% off because of the big January sale.

Properly attired, I went out into the cold again and walked to the railway station, because I had two reasons to go there.  One was to buy tickets for my trip to Tampere this evening; the other, of course, was to do a cache.  I accomplished both missions in short order, then walked back to the harbor to take a few pictures and contemplate taking the ferry to Suomenlinna. 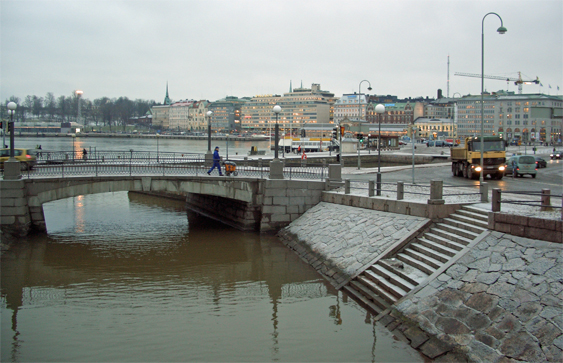 (Don’t let the colors fool you — I had Photoshop brighten everything and increase contrast.  It was a very grey day, so grey that I didn’t put on sunglasses even though the jet lag plan calls for them after noon.)

But I decided to stay on the mainland and save Suomenlinna for another day.  So I went into The Old Market Hall for lunch.  It reminded me very much of Faneuil Hall in Boston — two hallways of shops (mostly food stalls).  I fought off the temptation to have sushi or falafel and went with a kebab instead.  Then it was back into the cool weather and a stroll over to Uspenski Cathedral, which was closed (it was, after all, Monday). 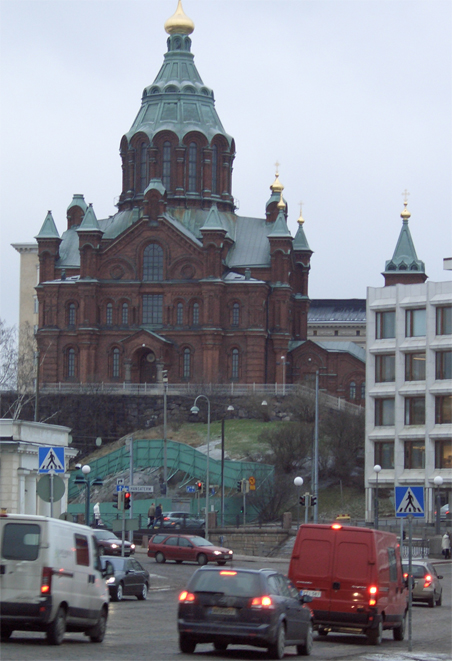 But the trip wasn’t wasted; as I was leaving, I checked my GPS and discovered that there was a cache right at the Cathedral.  It was easy to find, but when I was ready to put the cache back, a workman had just gotten into his van right by the location.  So I took the cache for a little walk, and when I returned, the coast was clear.

I then took the tram over to Senate Square, only to discover that I’d been there before — it’s the site of the big Lutheran Cathedral where the cache I found last night is hidden.  So I got back on the tram and went to TÃ¶Ã¶lÃ¶ to do yet another cache.  And to go visit the Sibelius Monument, which was a few minutes’ walk away.

Getting there was more interesting than I’d expected — I left the beaten and plowed path, and found myself on a layer of ice.  And then I found much more of myself on the ice; no harm done, though, and I picked myself up and started walking more carefully.  I got to the monument at the same time as a busload of tourists — I’m not sure where they were from, but they were speaking a Slavic language.  I was comforted when I saw them slipping and sliding around, too! 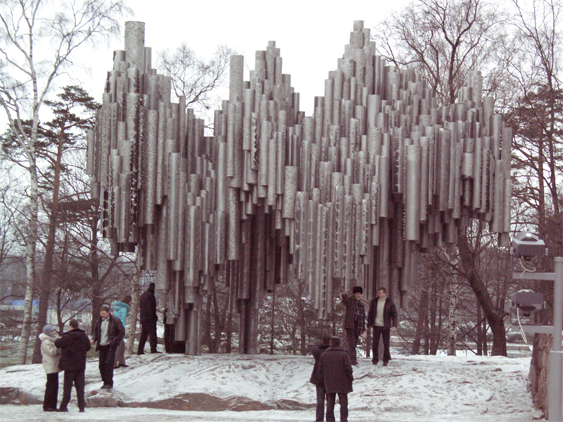 By this time, it was getting late (or at least it felt that way — it was only 2:30pm, but it was pretty dim), so I took a tram back to my hotel, picked up my luggage, and trammed to the railway station, where I took the train to Tampere and then walked the half-block to my hotel,  the Scandic Tampere City Center.  My room is smaller than the one I had last night, and doesn’t have much in the way of storage space, which will be a little bit inconvenient.  But it’s warm and has heated floors, which are both nice attributes in this climate.  It also has a nice, if over-heated, fitness center, which I suspect I’m going to need to use a lot on this trip.

I had dinner in the hotel restaurant with one of my colleagues on the project and should meet the others tomorrow (they’re staying at a different hotel).  Tomorrow is going to start early, so I think I had best stop now!