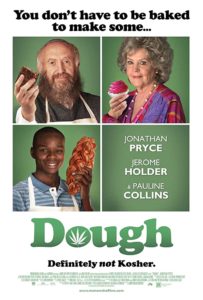 At Torah Study this morning, Rabbi Aron mentioned that the Executive Director of the Silicon Valley Jewish Film Festival would be hosting a discussion of Dough, which she described as a “silly movie”. Tonight, we watched the movie – “silly” is quite apt as a description. It’s a heartwarming and funny exploration of Islamic-Jewish relations, baking, real estate, and crime in Britain. I have watched SF and Fantasy movies which required less of a suspension of disbelief, but Diane and I both enjoyed it – if you have Amazon Prime, it’s free, and it’s only 95 minutes long.

We accompanied the movie with libations – back in the early ’90s, I brought back a liter of Bols from my first trip to Amsterdam. It has sat, unopened, from then until tonight (most of the time spent in the very back of a kitchen cabinet, forgotten from year to year). Tonight, I made an approximation of an Amsterdam Mule (I used ginger beer instead of the Bols Ginger) – it went well with the movie, though other substances easily available in Amsterdam would have fit the theme better.