One of my lockdown projects has been to curate my digital photo collection – get rid of the bad and duplicate photos, identify people, and title and geotag everything I keep. It’s slow going – I started on March 18 with photos from 2000 and just finished 2004 today, including a day touring Richmond, Virginia back in August.

I grew up in Richmond; my mother was born there and lived there most of her life, and my brother still lives there. And growing up there in the late ”˜50s and the ”˜60s, I lived through the era of Massive Resistance to desegregation and the commemoration of the 100th anniversary of the Civil War (often called the “War Between The States”). The restrooms and drinking fountains in the downtown department stores still had “White” and “Colored” signs, though I don’t think that was still being enforced. And I remember being bothered by language in my 4th grade Virginia History textbook describing the slaves as “happy” and the adulation of Robert E. Lee (see this article from the Richmond Times-Dispatch). Of course, Monument Avenue was filled with monuments to Confederate leaders.

None of my family was in North America during the Civil War, so I don’t have any Confederate soldiers in my past, but it would have been difficult to avoid the Lost Cause glorification. And it was all around me, so I wasn’t really conscious of it.

When I worked on those photos today, though, it jumped out at me. Most of the photos I took of statues at Capitol Square were of Confederates (Washington being the notable exception) – there was a huge statue of Stonewall Jackson; there was a statue of Robert E. Lee in the Capitol building; there was even a statue (from 1906) of William “Extra Billy” Smith, who was the oldest Confederate General and was a two-time Governor of Virginia.

We also toured the White House of the Confederacy that day. Today, its web page features an exhibit on the development of the Lost Cause mythos and its effect on current culture; back then, the museum glorified the Lost Cause. The photo from the museum that I find most illustrative is not of anything from the Civil War era – it’s a fish from Richmond’s 2001 “Go Fish!” street sculpture project. 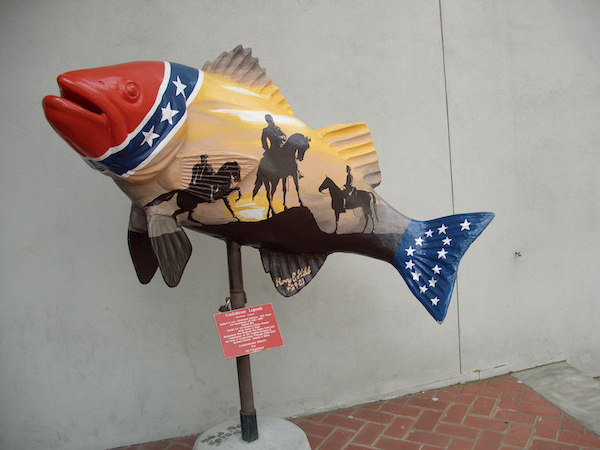 The text at the bottom of the plaque reads “Confederate History for All Virginians” – something to think about.