After the Farmers’ Market, a chat with our son, and lunch, I set out to debug (and, if possible, fix) my Raspberry Pi problems of yesterday. A little web searching on “my Raspberry Pi won’t boot” took me to this page at RaspberryPi.org. I followed their procedure and confirmed that my Pi Zero W was completely toasted; if I’m lucky, the Pi 2B may only have a “partially blown” polyfuse and might come back to life in a few days, but I’m not betting on it.

It looks like accidentally putting the AD2PI on the Raspberry Pi backwards was a really bad idea – it probably put 5V in the wrong place. Doing it a second time with the second Pi was an even worse idea.

I had one more Pi available – it spends its life listening for keypresses on an X10 pad and converting them into MQ messages that go to my Mac and turn audio/video components on and off, and, since I have two or three other ways of controlling the A/V gear, I decided to risk it and make one more try at the alarm. I was very careful in mounting the AD2PI this time, and it worked!

I’ve ordered a new Pi Zero W for the alarm system; it’ll be coming from the East Coast by mail, so I hope to have it before the end of the month.

After that, we watched Lot in Life from Silicon Valley Shakespeare – it’s a different take on the Biblical story of Lot, from the viewpoint of Lot’s wife. It was a fun way to spend slightly over an hour, and we stuck around for the talkback afterwards.

Dinner was a surprise – I’d planned to make Lemon-Rosemary Chicken, but even though I’d taken the chicken out of the freezer a full day ago, it was still quite frozen, so we had leftover Korean BBQ Meatballs instead. 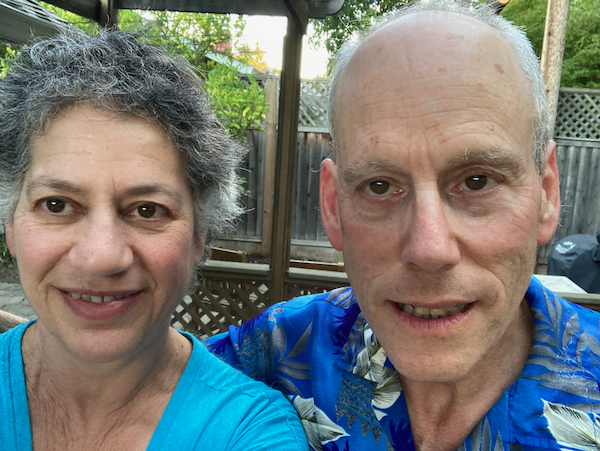 We finished the day by giving each other haircuts! Diane had cut my hair on May 29 and it was getting a little long; she hadn’t had a haircut since March 13. Cutting her hair was a little nerve-wracking (and I suspect she was even more nervous), but I think we survived.