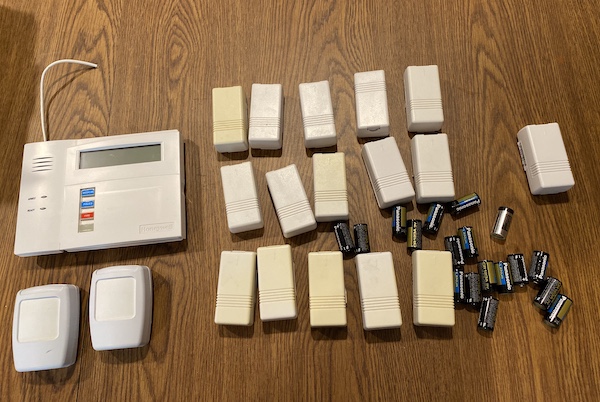 Our next-door neighbors used to have the same kind of alarm system that we have; when they replaced it, they gave me all of their hardware. I used one of their motion detectors to replace one of mine that had gone bad and put everything else in a box in the garage and forgot all about it.

Part of trying to figure out what’s going on with the AlarmDecoder is looking at the logs it creates so that I can correlate events caused by opening and closing windows with what the system reports. I kept seeing a LOT of events for devices that aren’t attached to our house’s system, which I had to filter out. I decided to look at the box in the garage and discovered that all of the detectors still had batteries installed and were faithfully reporting their status every few minutes – probably including a plea for a new battery.

I took all of the batteries out (fortunately, they weren’t leaking) and put the box back in the garage, where it will sit more quietly.

There are still a lot of events in my log from other people’s systems, but it’s a little less messy. And what else can you ask for these days?