Two months ago, I mentioned that I’d spent a couple of hours on hold with Grohe to get them to replace the pull-out spray head on our kitchen faucet, which I was supposed to receive at the end of October.

October came and went; I contacted Grohe again (this time by e-mail!) and got a reply a few days later, telling me that the part would be shipped in late November. They missed that deadline, too, but not by much – they shipped it on December 1 and I got it yesterday.

This morning, when I was ready to install it, I discovered two little doohickeys in the box with no explanation or instructions. 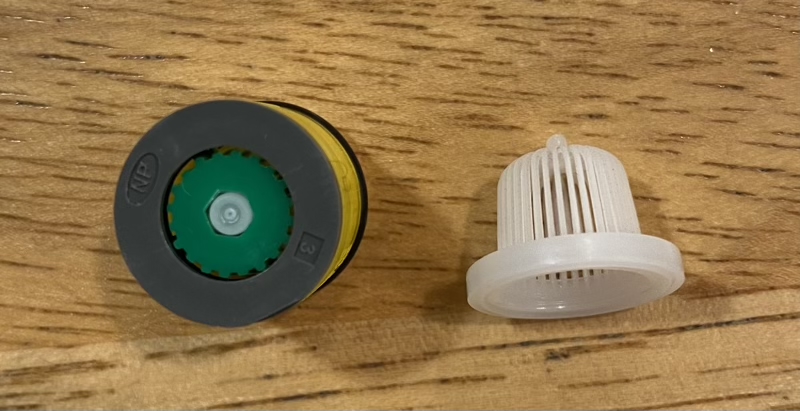 The white one looked like what was in the old spray head, but I couldn’t figure out how to install it, so I Googled and discovered that they were flow restrictors. I didn’t find instructions on how to install them, so I installed the spray head without one.

Boy, what a difference, especially when it comes to dislodging stuck-on food from a pan! And it’s easy to turn down the water for normal use, so I don’t even feel guilty about having a higher maximum flow available than I am probably legally entitled to have.

I still can’t figure out how to put in the restrictor so that it would stay in, but I don’t feel compelled to find the answer.