My chiropractor surprised me this morning. Last week, we’d talked about barbecuing and baking, including the pretzels I’ve been making. He was interested, so I sent him the recipe and mentioned that I hadn’t tried making them with the diastatic malt powder that was listed as an optional ingredient.

We went there this morning, and he handed me a small bag of powder. It was diastatic malt – he’d ordered a jar the day we’d talked! He clearly takes his food preparation seriously.

Naturally, I wanted to make pretzels as soon as we got home to see if I could detect a difference with the malt powder. I did a few things differently this time (beyond using the malt powder). I leveled the flour in the bowl instead of letting it pile up; I added the other dry ingredients except the yeast before the water (instead of putting the water in right after the flour); I put the yeast in the water and added them together as the final step before mixing.

The dough seemed to form more quickly than usual, but, as usual, there was a lot of flour that didn’t get incorporated. I added some water – perhaps 3 or 4 ounces – and kept mixing; I wound up with a moist lump of dough that came off the dough hooks and the side of the bowl much more easily than usual.

The dough rose; when I went to fold it, it seemed stickier than normal, but not unreasonably so. But when I tried to shape it into logs, it was almost too sticky to deal with – I had to put a lot of flour on my hands and on the board to get it to work.

It rose a lot in the 20 minutes that I let it rest before making the pretzels – and it was still very very sticky. But I persevered.

When it came time to boil the pretzels, I had more problems – several of them fell apart in the water. And they were sticking to the parchment paper. And some of them seemed to retain liquid. But I got them done and put them on two sheet pans and into the oven.

The pretzels on the top sheet pan looked properly baked after 14 minutes so I took them out of the oven and moved the bottom pan to the top – usually, I have to bake the bottom pretzels for an extra two minutes. Today, though, they didn’t look brown even after three minutes – I finally took them out and let them all cool.

When I cut into one of the pretzels from the bottom batch, the inside looked weird and felt gooey. We didn’t eat it. Nor either of the next two I tested. 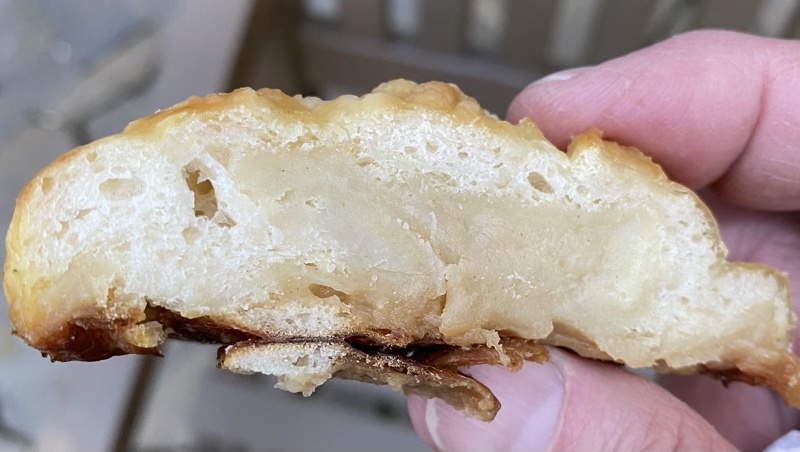 I don’t know what happened – my guess is that I added far too much water at the start of the process when I wanted to incorporate all of the flour. Maybe I should ignore the surplus flour next time? Advice welcome!

I’m not sure if I could tell the difference in flavor from the malt, but the pretzel we did eat was good. And we have half the batch left to try.