Last night was probably the longest sail of this trip; we weren’t due into Heimaey until around 9am, so we had a leisurely breakfast. I went out on deck just in time to catch the pilot boat approach and the pilot come on board. 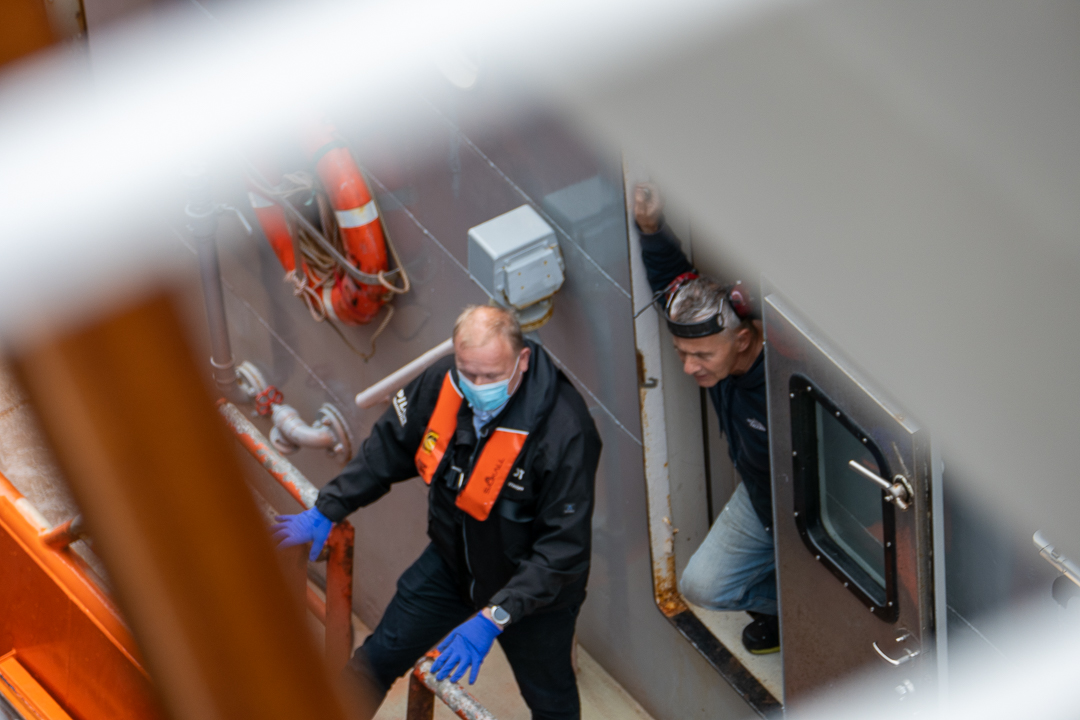 Once we’d docked, I went out on deck again and was nearly overwhelmed by the smell of fish – there were local birds taking advantage of the bounty, too. 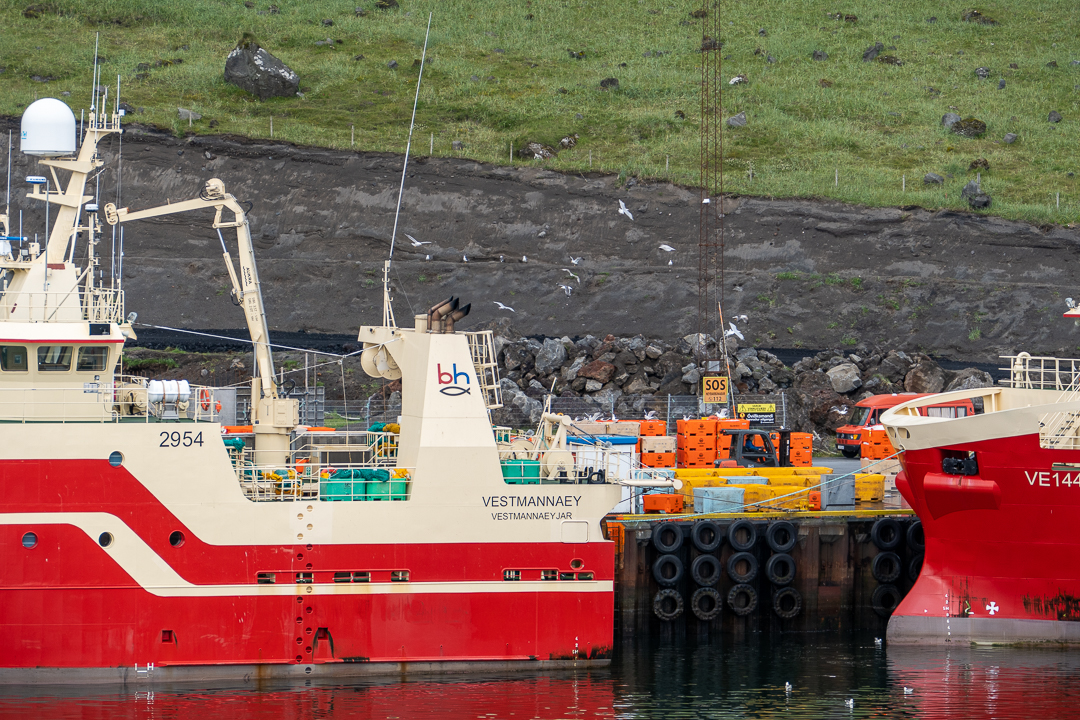 Our tour of Heimaey began at the Volcano Museum; Heimaey was nearly destroyed in 1973 by a sudden lava flow from a vent which opened without warning – the lava eventually formed a new volcanic cone, Eldfell, and added about 20% to the size of the island (so any time you hear a real estate agent tell you to “buy land because they’re not making it any more” you can ignore that advice).

After the museum, we took a drive through town, passing through the harbor (where we confirmed what our noses had already told us – fish was the core of the town’s economy!), passing by Sprangan, a cliff where young islanders learn rope swinging – it’s how they collect eggs from nesting birds.

We continued around the island, stopping at their festival grounds, which were all set up for a festival which draws about 15,000 Icelanders every year (the population of Heimaey is only about 4,000). 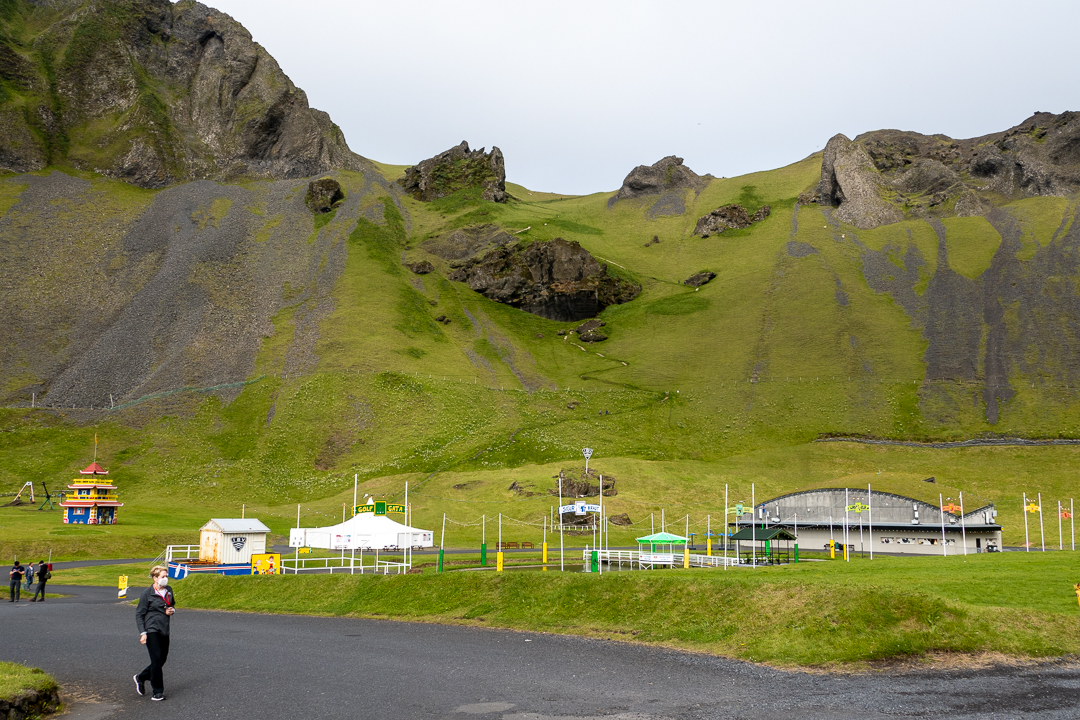 The festival happens the first weekend in August, the weekend which has the most domestic tourism. But it was cancelled at the last minute this year because of Covid concerns. Maybe next year….

From there, we drove to the “puffin house” to enjoy one last view of puffins before we leave Iceland. 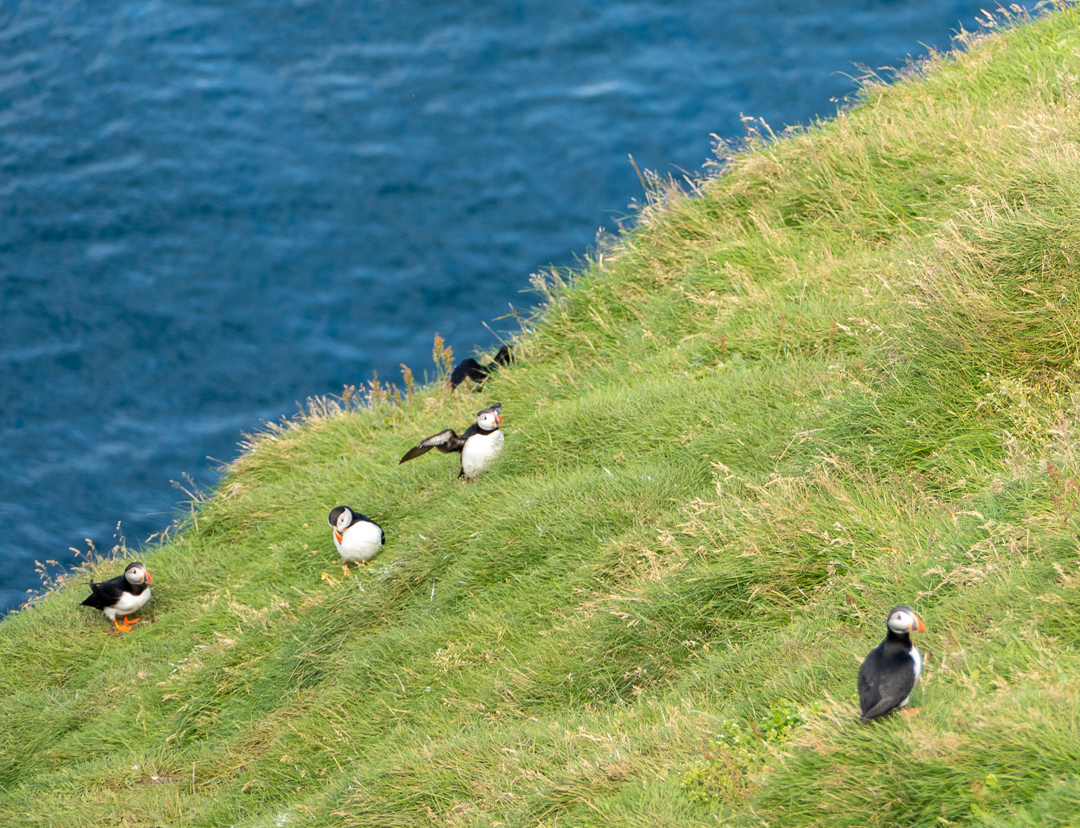 While we were there, our guide Sindri noticed a baby kittiwake that seemed to be struggling, so he grabbed it 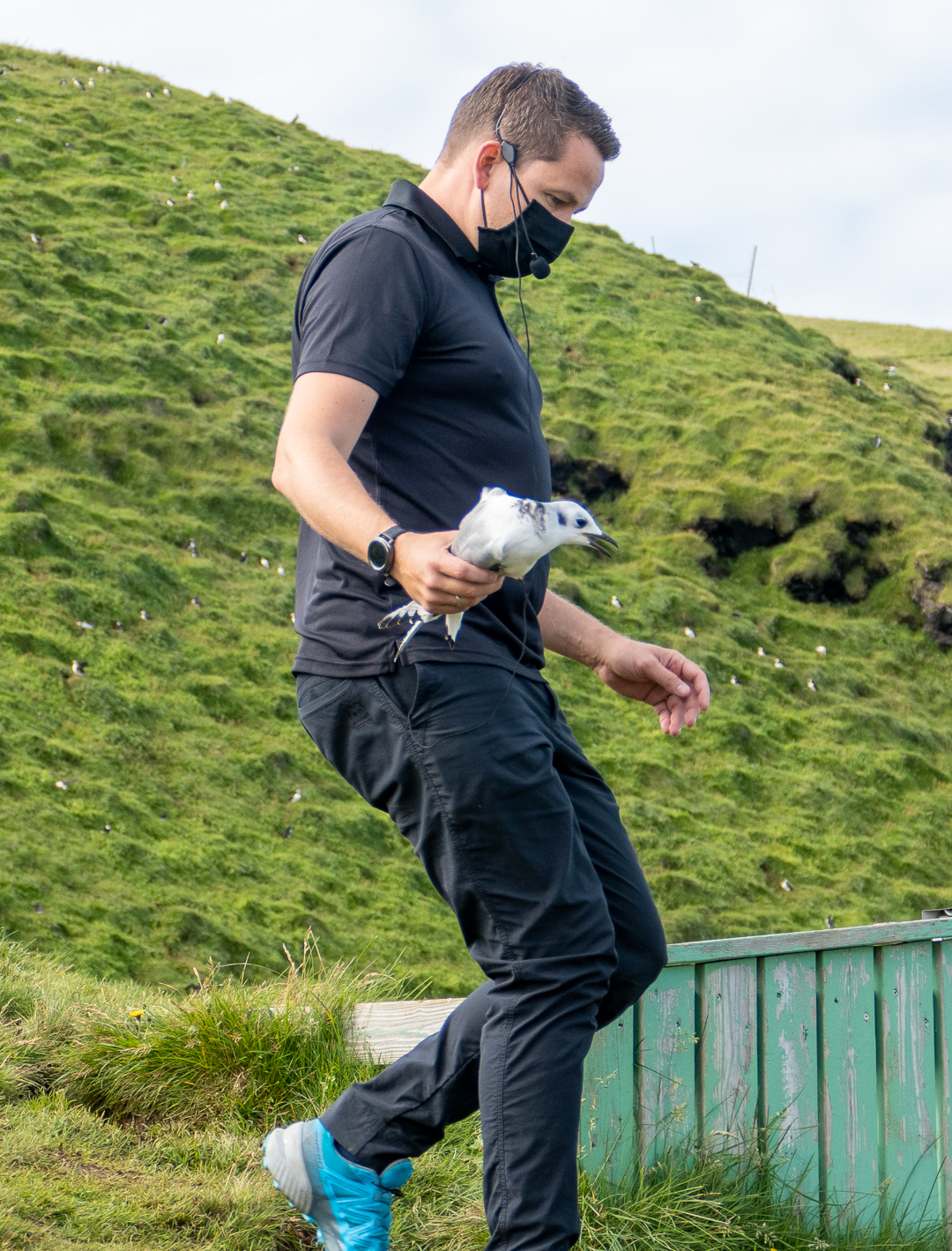 then he carried it down to the shore

and threw it into the air so it could fly on its own. 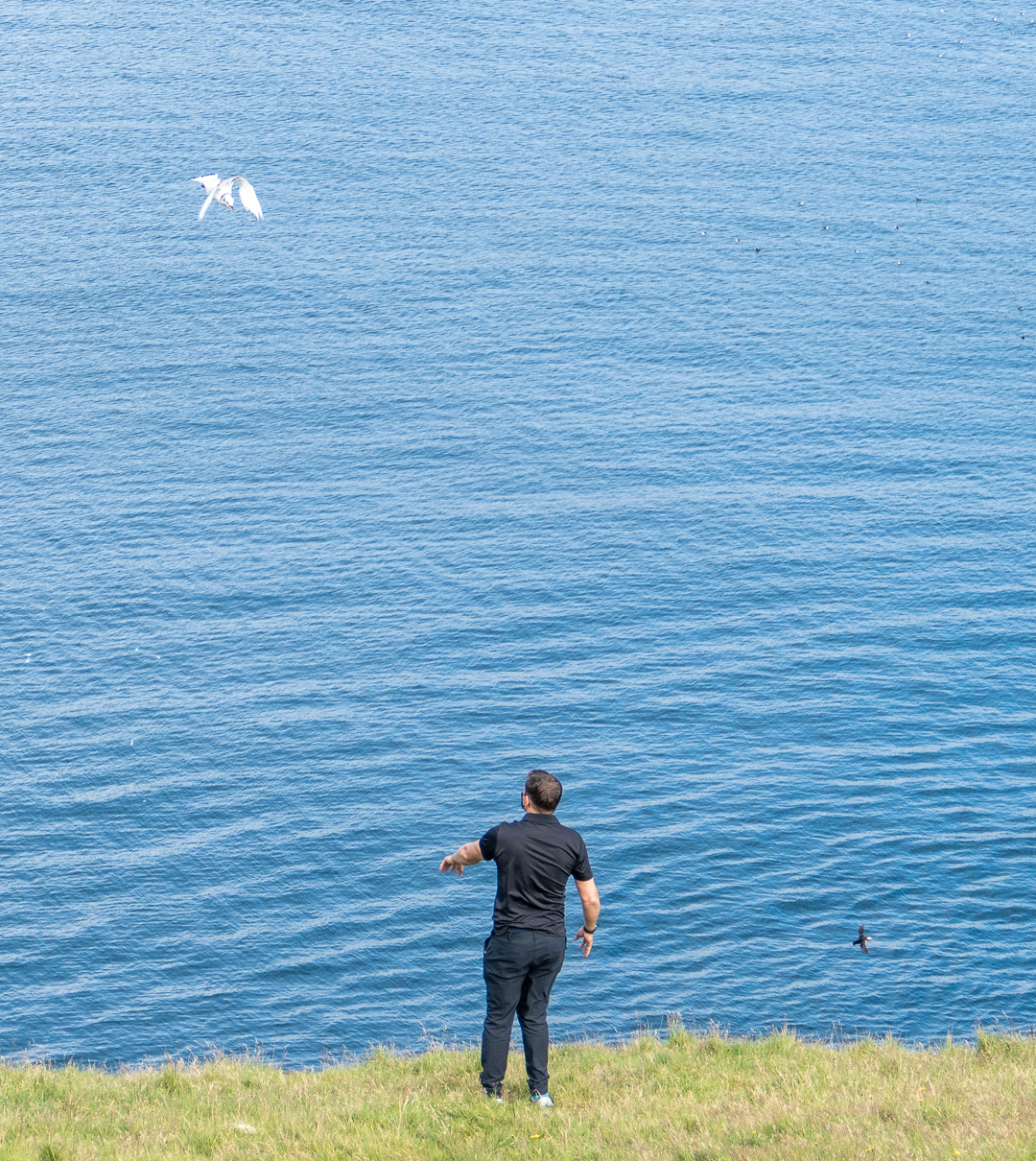 Our final stop was near the airport – Sindri told us about the struggle to save Heimaey after the eruption, and the use of pumps like this one to slow the advance of the lava.

At first, they used the pumps to save houses and the town, but that meant that the lava started to threaten the harbor – and without the harbor, there was no reason for the town to exist. So they concentrated on the harbor and saved it; people started moving back into town as soon as the eruption ended, six months after it started.

We didn’t get a chance to see any of Heimaey on our own – but it looked like a nice place to explore on our next trip to Iceland.

We sailed away during lunch; there was one last lecture on the schedule, from Brian Murray from Duke on the transition to a low-carbon economy. At the end of the lecture, there were announcements: macarons were available in the lounge and there were whales visible from the ship. We decided that macarons could wait and went up to the observatory lounge on Deck 6.

We were not disappointed. I’ve never seen so many whales at one time, nor for so long – they were near the ship for at least an hour. I took over 200 photos, but not all of them were worth keeping. Here are a few I like – and there are many others. 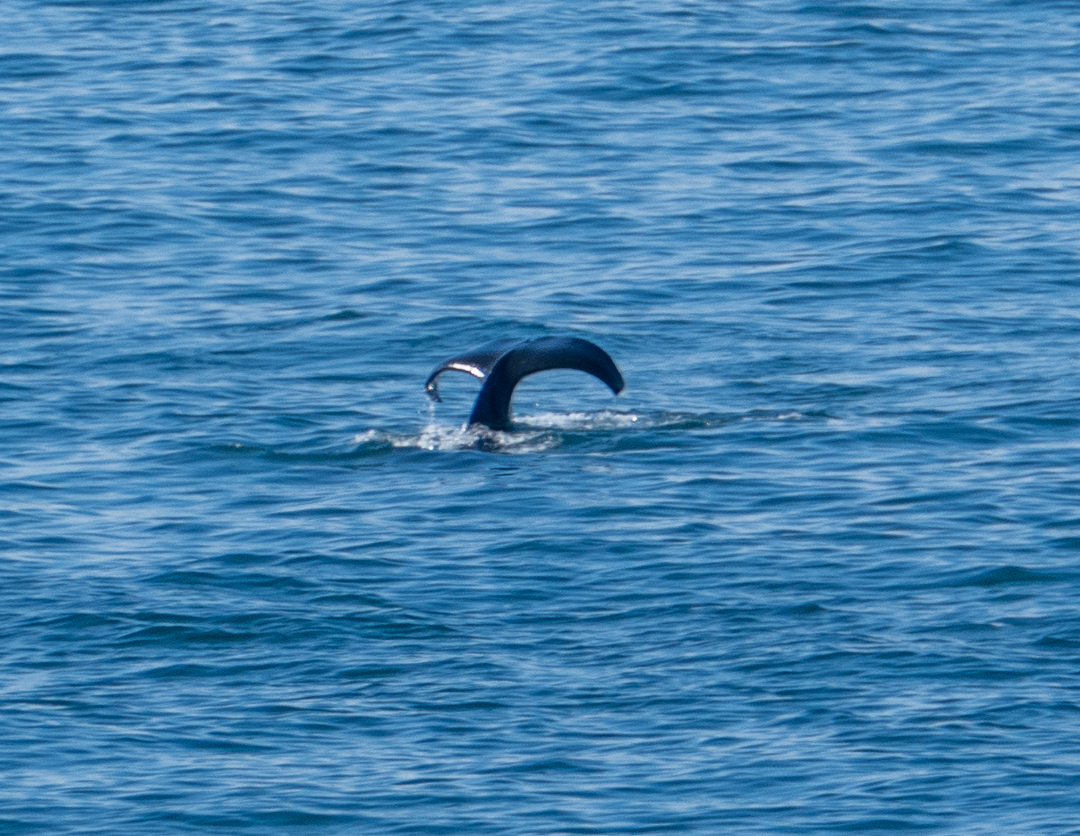 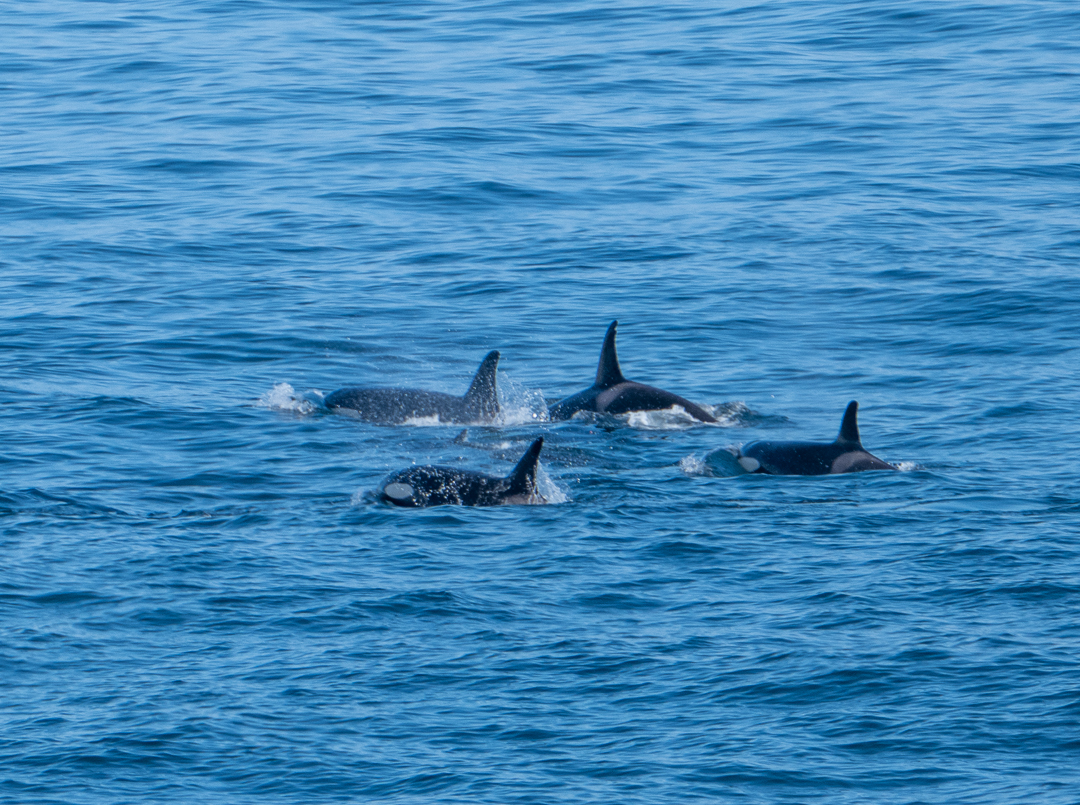 We have a Covid testing appointment tomorrow morning at 9am, so we can’t linger on the ship (which probably makes them happy – they want to clean the room for the next guests). It’s been a good trip, and there’s more to come before we’re home.