It was Diane’s birthday today. We went to the gym early this morning, came home, talked with Jeff, had lunch, and were almost ready to clean up when there was a knock at the door. It was our mail carrier – she’d just delivered the mail and happened to notice a leak near the porch, where the water line emerges from the ground and wanted me to know about it, which was a good thing because we hadn’t seen it when we got home an hour earlier. 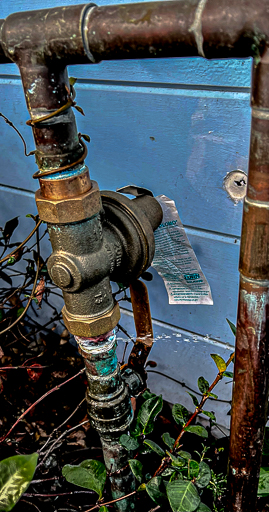 She even gave me the name of a plumber who was on her route in case I needed one – and I did, because our usual plumber was on vacation. I called CMS Plumbing who told me they could have someone out in a few hours, which seemed pretty good for New Year’s Eve. And then a few minutes later, they called back and said the tech had finished his previous job early and he could be at our house in 20 minutes – and he was.

The problem turned out to be fairly simple – we’d had to have a new pressure regulator installed in January, and that plumber had put the Teflon tape at the joints on wrong, so it wore out over time and allowed water to start leaking. Today’s plumber (John) took everything apart, cleaned it, put on new tape, and put it back together – no leaks. From detection to repair was less than two hours, and we probably only lost a gallon or two of water during that time, so I think we got off easy.

I made one of Diane’s favorites for dinner tonight (it’s one of my favorites, too, so it wasn’t exactly a grand gesture :-)), Sesame Crusted Seared Ahi Tuna. And then we watched Don’t Look Up; it wasn’t the most romantic movie I could have suggested. Or the funniest. Or the most thought-provoking. But it was entertaining and interesting; it definitely reminded me of Neal Stephenson’s Seveneves and of the Golgafrinchan B Ark in Douglas Adams’s The Restaurant at the End of the Universe.