We replaced our furnace and ducting about 10 years ago – PG&E was offering a special program for “energy upgrades”. We also replaced our water heater, pipes, and air conditioning at the same time; it was a major project.

Recently, I noticed an odd behavior when the furnace cycled on – it would start, but after a few seconds, the fan would stop for about a minute, then it’d start up again and stay on long enough to bring up the temperature to the desired point. I called the company that had installed the furnace, but they’d vanished in the last 10 years, so I started looking for someone else.

My neighbor across the street had just had some emergency work done by American HVAC and was very pleased with the company and the tech, Rudy. So I called and asked if they could send Rudy to look at my furnace – no hurry. He was at the house in less than two hours!

I told him the problem and he went into the attic, returning with pictures and bad news. 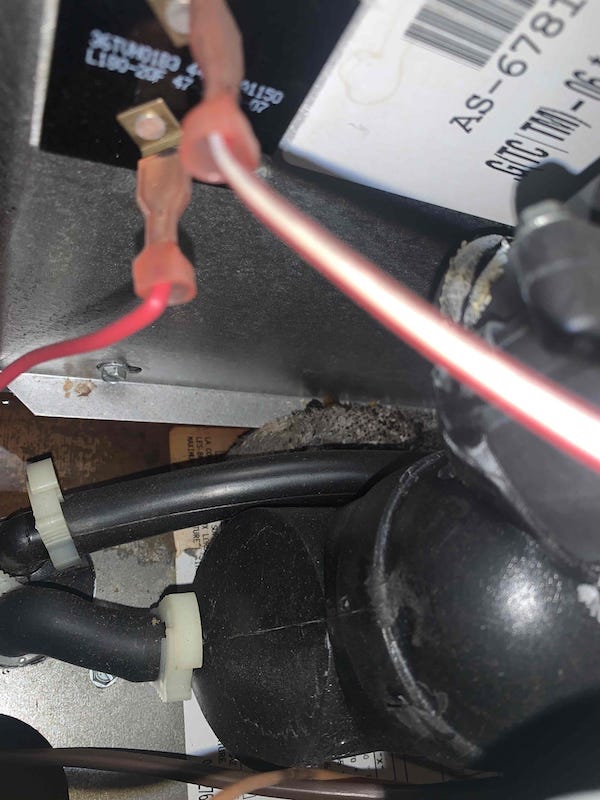 We’d had a 95 AFUE single-stage furnace installed as part of the energy upgrade; high-efficiency furnaces like that need plumbing to get rid of the condensation the furnace produces, and ours had started leaking – into the heat exchanger, among other places. And there was corrosion and mold all over the place because of the leaks.

It’d be less expensive to replace the furnace with a mid-efficiency two-stage unit (80 AFUE) than to replace the heat exchanger, and having a two-stage system would even out the temperature swings. And there’d be no plumbing problems.

He also said that the static pressure in the system was high – adding another return would help that. And it would increase airflow, which is an issue in part of the house.

I was hoping for a simple repair, but it seems unlikely. I’m going get a second opinion before we do anything, of course.